Nobody played the original Shantae. I didn’t and neither did you. It was a Game Boy Color game released a year after the GBA hit retail. It had such a limited run that loose copies currently fetch well over $100. The only reason we’ve wanted to see a sequel is because we’ve been totally shamed by a few media outlets, the ones that actually bothered to review the original, into believing we missed out on the greatest gem in the GBC library.

Shantae’s daddy Matt Bozon and the rest of the team at WayForward weren’t about to let their baby be forgotten. After a canceled GBA sequel, Shantae found her way on to the DSiWare service in an all-new episodic adventure. Fast-forward one year, Shantae: Risky’s Revenge has been condensed into a solitary entry and unleashed to a population that has been reminded ad nauseum not to miss this game.

Can this game live up to nearly a decade of hype? Well… yes. It can. Everything that has been said about this game is true. Oh my God, is it true. 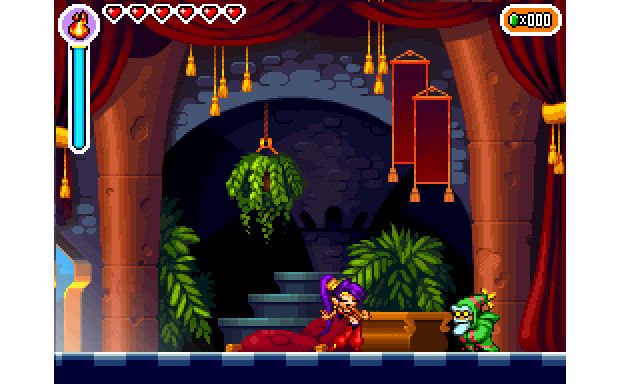 You know how some games have that one goofy little time-waster that everybody has to do? In Metal Gear Solid, it’s humping unconscious guards, and in Super Castlevania IV, it’s spinning the whip 360 degrees. Well, belly dancing satisfies that role. I spent a good five minutes in the beginning watching that girl shake her ass. It’s so mesmerizing.

In fact, “mesmerizing” is the best word to describe the entire game. Judging only from the stills, Risky’s Revenge boasts some of the best sprite work in the past decade. Then you see the game in motion and… whoa! We should count ourselves lucky to have games like this and Scott Pilgrim vs. the World come out in the same year, keeping the pixel art banner waving proudly.

Every character is unique, every background and floor tile vibrant and modeled to perfection. Nothing is static — even while stationary, every enemy and item bobs, weaves, or pulsates in some fashion. Every frame of animation is rich in detail, and no better is this demonstrated than with Shantae herself. Her ponytail, used to whip bad guys, becomes more and more frazzled as she takes damage. When she dances, her eyes flicker seductively. And when she finds an important item, she strikes a pose so triumphant that her boobs jiggle. 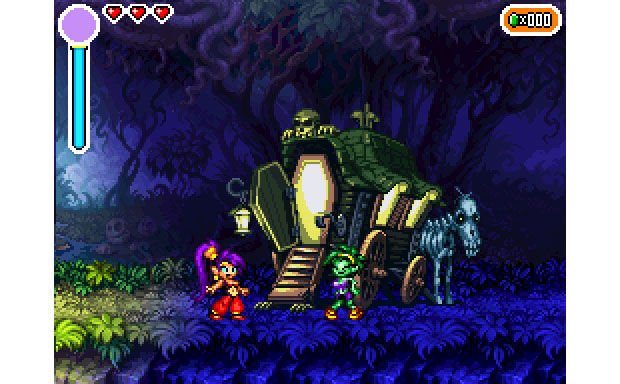 You’ll notice that most of the main cast (and about half the cannon fodder) are female and rock bombshell figures. Aside from Shantae, there’s Sky, Shantae’s thong-clad, bird-handling BFF, Risky Boots, the buxom pirate villainess wearing a skull-faced tube top, and Rottytops, the sprightly teenage zombie sporting a pair of Daisy Dukes. Far from being shameful, though, the characters’ sex appeal only adds to the their charm. When you see the girls in all their pixelated glory, you aren’t thinking, “Whoa, baby!” More like, “Awww! How adorable!” This is what “moe” is all about!

You get all this eye candy plus a killer Arabian-inspired soundtrack by Jake Kaufman! If you don’t know who Jake Kaufman is, go educate yourself. Though his professional work in games like Contra 4 and fan community contributions under the alias “virt,” he’s clearly a man with a true passion for game arrangements. In fact, he’s made the entire Shantae: Risky’s Revenge soundtrack available for whatever you are willing to pay, as we’ve already noted. Do yourself a favor and drop those tracks in your iPod.

Of course, none of this would mean jack if the game didn’t play as well as it looked, but thankfully it does. As Shantae, you must explore her homeworld of Sequin Land and collect three magic seals before Risky Boots acquires them first and awakens the dark power within a recently uncovered genie lamp. The game is an action platformer similar to Castlevania II in that you traverse an open overworld and tackle dungeons. As you gain new animal transformations and powers, you gain access to previously blocked-off sections on the map. 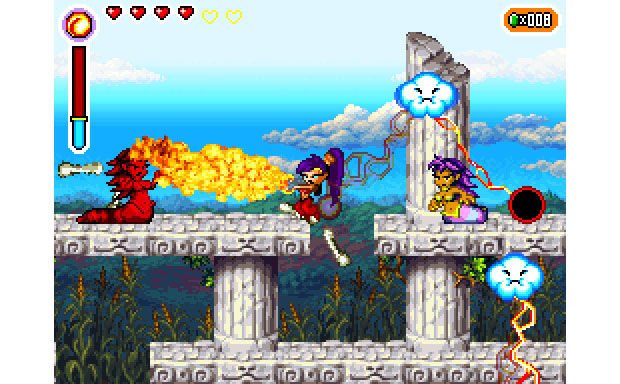 Your magic system couldn’t be simpler — all non-transformation magic is purchased in the item shop in the game’s central hub, Scuttle Town. There, you’ll find three types of upgradeable spells — flame, barrier, and thundercloud — as well as performance enhancers such as hair product that increases your attack speed. In addition to gems, the more powerful tools require a number of Magic Jams, jars of delicious preserves that are scattered in treasure chests throughout the world.

Regardless of how you choose to equip yourself, you’ll find that most enemies go down easily with a few flicks of your hair. While things get a bit rougher when hordes gang up on you, the real challenge comes during the boss encounters. With later bosses requiring seemingly innumerable hits, these are tests of endurance in which death may come about by the simple act of attrition. You can always stock up on health-restoring potions in the store beforehand to ensure that you’ll keep the fight alive, though.

I was surprised by how little the game holds your hand. If you are unsure what your next target is, you could go into town and ask for directions, but even then you’ll only receive a gentle nudge. The general location of hidden treasure chests aren’t highlighted on the overworld map, dungeons don’t even offer maps, and puzzling obstacles are overcome through honest-to-God observational study. Risky’s Revenge is by no means difficult or obtuse in the way old-school titles like aforementioned Castlevania II are, but it places value in self-discovery unlike other open-world action games these days. For that, I’m grateful. 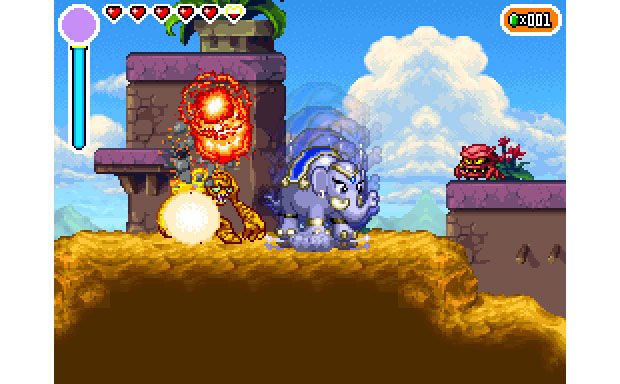 The one element I was really disappointed in was the animal transformations. Shantae can become a monkey to scale walls, an elephant to smash boulders, or a mermaid to travel underwater. Each form is just as adorable as the next, so it’s a shame that they don’t get much use outside of bypassing specific obstacles. When it comes to combat, none of them are very practical — the elephant is too slow and cumbersome, the mermaid can only attack in underwater zones, and the monkey can’t attack at all. It would have been nice to see a pure offensive transformation or two, something we could get more mileage out of.

But that’s not really a flaw so much as it is personal preference. In fact, all of the game’s shortcomings are things that would only serve to make a great game even better if addressed. As it stands, Risky’s Revenge is a beefy adventure that can run you at least six hours, lengthier than what you’d typically expect a side-scroller to be. It doesn’t give you any opportunity to find serious faults.

For example, there are technically only two dungeons plus a Battle Tower in which you fight several waves of standard foes. Could there have been more? Sure, but there’s so much action in the overworld that you never experience periods of downtime. There are a total of five boss battles, one of which is a rematch. Could there have been more? Absolutely, but the ones you get are weighty enough to satisfy nearly anybody.

Speaking of satisfaction, this game should be a dream for speed runners. Following the end credits, you get a Metroid-esque clear screen that displays your clear time, item completion rate, and a bonus image of one the lovely ladies. You know what that means! Your image reward is dependent on your performance, so start a new file and go for a new record! 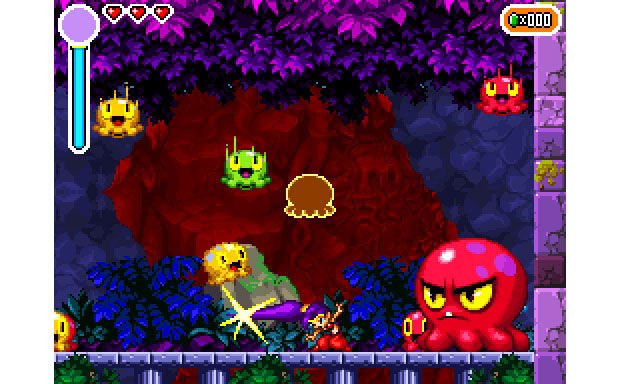 The original Shantae was a technical marvel that pushed the Game Boy Color to its limits, and Risky’s Revenge carries on the tradition. It’s really hard to believe that this is a DSiWare game. We’ve become so accustomed to half-assed cell phone ports that nobody thought such an ambitious project would be possible. I don’t know if this says more about WayForward’s immeasurable talent or about how lazy and complacent lesser developers have become. Either way, this is hands-down the best DSiWare game available, easily worth the 1200-point premium.

More than just a great DSiWare game, Shantae: Risky’s Revenge is a great DS game, period. One of the best, in fact. There’s so much love and detail here that it would be criminal to let this franchise fall into obscurity a second time. Buy this game and fall in love with that adorable little half genie as I have.