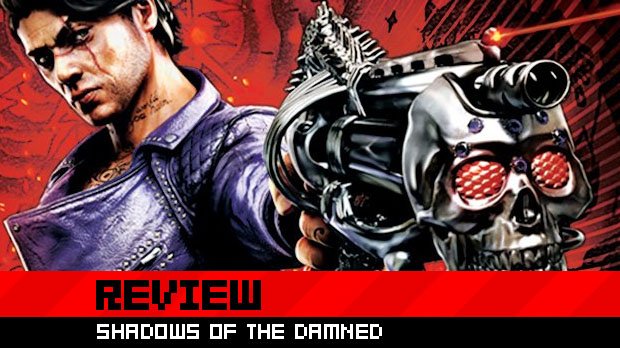 A demon with a goat’s head is riding a horse that defecates pure darkness. Then the demon eats the horse’s heart, grows to the size of a ten-story building, eats the rest of the horse and proceeds to urinate more darkness into a gigantic fountain.

Welcome to Shadows of the Damned.

Shadows of the Damned stars Garcia Hotspur, a flamboyant Latino demon hunter who embarks on a mission into Hell itself to rescue his girlfriend from Fleming, Lord of Demons. The survival horror style of Resident Evil creator Shinji Mikami is married to the abstract punk attitude of No More Heroes‘ Suda 51 and propelled along by a soundtrack courtesy of Silent Hill‘s Akira Yamaoka. If that description hasn’t set your heart racing, it’s possible that you don’t have a heart.

As far as games by Grasshopper Manufacture go, Shadows of the Damned may be the most “conventional” offering yet. It takes the form of a third-person shooter with many overt nods to old school horror games, where exploration and puzzle solving are just as much part of the experience as the combat. It’s a more straightforward, dare I say traditional affair from a studio known for breaking rules and experimenting with gameplay.

However, if you think that more approachable interaction will make for a notably standard and formulaic adventure, you’d be dead wrong. Almost as if to compensate for the less bizarre gameplay, Shadows of the Damned features characters and concepts that are more demented than anything featured in past games.

Giant crows that scream “Fuuuuck yooooou” and a talking skull called Johnson that can turn into a gun called The Boner only scratch the surface of how ridiculous, insane and sometimes depraved the game can be. While Damned‘s endless parade of penis jokes can wear thin, the overall plot and impressively performed dialog is just so charmingly out-there that one cannot help laughing along. The comedy sometimes borders on anti-humor, but it never fails to be entertaining.

Even the conventional gameplay is presented in such an obscure way that you might be fooled into thinking it’s more original than it actually is. For instance, some doors are locked and you have to find a key. Simple enough, except that the locks are whimpering babies’ heads and the keys are eyes, brains or strawberries that need to be stuffed into their mouths. Ordinarily mundane gameplay tropes look and feel deceptively inventive through sheer force of presentation, and that’s no small accomplishment.

The balance between light and dark is a central theme of Garcia’s adventure. Pure darkness drains Hotspur’s life if he remains in it too long, but pathways or items are often hidden inside areas drenched in the stuff. Furthermore, certain doors are barred by “demon pubes” that only disappear when their supply of blood is cut off — blood which can only be seen and shot at when Garcia is in the darkness.

To help him fight off the darkness, Garcia can wield the light shot — concentrated light that acts as the alt-fire of any gun. If he shoots this at goat heads or Light Sushi (I’m not explaining it!) he can illuminate his surroundings, although some demons will try to undo your work and plunge the area back into darkness.

Although most of the puzzles are self explanatory, that doesn’t stop them from being enjoyable. You’ll never really be stuck not knowing what to do, but it’s still always cool and fun to act out the solution, if only for the humorous situations you’re expected to take part in. Some of the areas where you’re stuck in the darkness, collecting hearts to keep your energy up and looking for an exit, can be quite tense as well, although Garcia can always drink a bottle of tequila to keep his health up!

The combat itself can feel a little loose and clunky — almost as if to hammer home the idea that it was developed by a studio not used to this type of gameplay — but again it manages to remain fun in spite of any setbacks. Garcia has access to three weapon-types: the pistol-like Boner, the rapid-fire Teether and a close-range Skullcushioner. Over the course of the game, these weapons can be enhanced with red crystals and even transformed into new and powerful models after defeating a boss. Eventually you’ll be able to shoot bombs from your newly acquired Hot Boner or fire a giant skull that acts like an explosive bowling ball.

Over the course of the game, Garcia will meet and face a variety of demons, many of which can be stunned with Light Shots and executed at close range. It’s always satisfying to blast a weak demon’s leg off and repeatedly stamp on its spine once it’s grounded, generating white gems (the game’s currency) with each stomp. Tougher demons will have red patches of human blood that grant them power, and exposing that blood to shoot at it is the only way to harm them. Demons that become doused in darkness will need to be robbed of their inky armor with a light shot before regular ammunition can finish the job. When surrounded, Garcia can also wield Johnson like a club, although melee attacks are generally useless.

An undeniable highlight is the range of eccentric boss encounters. Like so much about the game, none of them are especially difficult, but they follow the Zelda pattern of boss fights — in that working out how to beat them is the challenge, rather than undertaking the required actions themselves. Figuring out the enemy’s vulnerability, while never overtly taxing, is consistently rewarding.

Shadows of the Damned is dedicated to fun and silliness above all other concerns, and it mostly works. There are a few problems holding back the merriment, however — the in-game camera has a strange momentum to it that sees it swing wildly from left to right at times, and the perspective shift while aiming seems to be off kilter a tad, making it more difficult than it should be to hit a target. Those who care about length will be put off by the fact that the game is eight hours long without any New Game Plus option, either. These issues are things that cannot help but be noticed, though they’re minor inconveniences as opposed to overwhelmingly ruinous faults.

The same thing may not be said, however, for the many technical failings. I hate to say it, but the game itself is pretty atrociously buggy. For one thing, screen-tearing absolutely dominates the graphics, appearing regularly and obnoxiously throughout the entire course of the game. I also encountered no less than three glitches that actively roadblocked my progression and forced me to reload a checkpoint. I cannot pretend these problems aren’t there and I cannot pretend that anybody playing the game has a good chance of being repulsed by the frankly shoddy production values of the finished product. As fun as this game is, there is some really sloppy stuff in that final code and I’m angry that a game so fun and ballsy has been let down by something so pathetic.

With such an angering complaint in mind, it’s a testament to just how fantastically entertaining this game is that I declare it’s worth the hassle. Shadows of the Damned is worth fighting through vertical sync failures and exasperating bugs just to see what happens next in one of the most wonderfully weird games you could ever play. It takes a rare, very special kind of game to be able to power through otherwise overbearing technical blemishes, but Grasshopper’s latest manages such an impressive feat. So long as you go in prepared for an very imperfect game, you stand to have a riotous good time.

What the game lacks in graphical gorgeousness and technical competence, it more than makes up for with pure, unabashed, theatrical style. Of special note is Yamaoka’s soundtrack, with which I believe the composer has outdone himself. Shades of Silent Hill are mixed with a heavier, punkier, more tongue-in-cheek style of music and there’s more than a handful of standout tracks (the Light Sushi’s theme tune alone makes the game worth playing through). The music is backed up by some fantastic voice acting, too. The banter between Steve Blum’s ostentatious Garcia and Greg Ellis’ neurotic Johnson makes for a great double act and a pair of protagonists that you just won’t find in any other game.

Shadows of the Damned is an absurd game, but it’s an absurdity so delicious in delivery that one can’t help throwing common sense to the wind in order to just go with it. Despite being Grasshopper’s most “normal” game on many levels, Damned somehow manages to be the most memorable, idiosyncratic and preposterous game the studio has ever developed — yet while it revels in its own weirdness, it never once excludes the player. Unlike many “odd” games on the market, Damned wants you along for the ride, every step of the way.

All this, and I didn’t even mention the level that acts as a glorious tribute to The Evil Dead.

Nobody will be able to deny that Shadows of the Damned has its glaring problems, but only the cold hearted can deny the game its credit as a refreshingly senseless, gratifying, pleasurable exploit. This crackbrained horror romp takes camp to a new extreme and wants you, the player, to have nothing but fun the entire time. For those in the right frame of mind and a willingness to forgive, that fun will be easy to discover and enjoyed by the bucketful. For everybody else, it is perfectly understandable that they will not find the problems so hard to overlook, but they will most surely miss out on a game that really needs to be seen to be believed.

For those people, I feel sad. They’ll miss out on one of the funniest mindfucks this industry has to offer.