Chair Entertainment’s Shadow Complex is out today on Xbox LIVE Arcade for 1200 MS Points, or 15 American dollars. It’s a “Metroidvania”-style side-scroller, heavily influenced by Super Metroid. You blow a lot of things up, and get a lot of cool gadgets in the process.

Not sold on it yet? How’s this: There’s a review after the jump, but in the time it could take you to read it, you could have already downloaded Shadow Complex and started playing it. There, I said it — go buy Shadow Complex. Yes, I think it’s that good.

In Shadow Complex, you play as Jason, just some normal guy on a nice hike with some girl through some woods that lead to some underground facility and — oh no! That girl has been kidnapped! Good thing you’re not really just any normal guy… your dad’s a military man, so you’ve got some fighting chops. Or something. I’m not quite sure, to be honest with you — Shadow Complex’s narrative isn’t its strong suit, despite the fact that it’s based in the universe of Orson Scott Card’s Empire.

The fact that the game only hints that it will deliver a compelling plot (but then never really does), is secondary to the desire you’ll have to run, jump, and climb from one area to next so you can find your next weapon or suit upgrade. Or take out the next gigantic enemy walker with a combination of a foam gun and rockets. Just writing about it makes me want to do it again. Right now.

As a modern-day take on side-scrolling action games like Super Metroid and Castlevania: Symphony of the Night, Shadow Complex not only holds its own, but makes some great strides to bring the formula up to date with immaculate polish and visuals. The basics are the same: the game presents players with a huge map to explore with much of it closed off until certain criteria are met, such as obtaining a jet pack boost ability or defeating a boss. 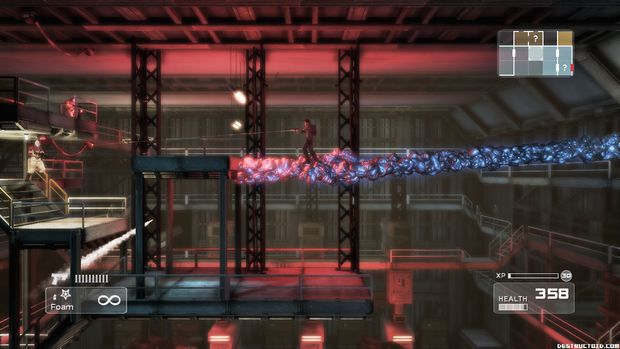 At the start, Jason is mostly empty-handed, save for a flashlight. As you explore the game’s world — and you’ll be doing plenty of that — you’ll gradually find upgrades to your abilities, allowing you to access more of the map. You’ll also gain experience for defeating enemies and unearthing new parts of the map, which boosts things like health and stamina. As with most games of this type, the experience is both satisfying and addicting. Chair very obviously and carefully crafted how and when you’ll receive your upgrades; you’ll easily get lost in the hunt and your desire to discover uncharted territory and pick up fresh items.

Fortunately, the act of moving Jason around and taking out enemies simply feels good and spot-on in your hands. While the game is rendered using the Unreal Engine 3.0 in 3D, all movement is done on a 2D plane. There are a few spots where controls feel a tad imprecise; Jason may get caught on a ledge or a wall while jumping, for instance. It may also take a while for your brain to adjust to the 2D movement in a 3D environment, but it won’t take long before you get a feel what you can and what you can’t make Jason do.

Combat in Shadow Complex is simple but effective, and fun, with guns and other gadgets mapped to the right trigger. While you’ll be fighting many enemies on the 2D plane, some will attack from above, below, or even the environment’s background. Pulling the right trigger will fire straight ahead, with slight auto-aim adjusting based on your surroundings. The right analog stick can be used to aim more accurately.

Admittedly, the aim is sometimes off — the aim-assist feature, indicated by a laser scope attached to all of the game’s guns, sometimes won’t find your intended target. Some firefights can and do feel a bit random, more luck than actual skill. However, it never turned into a problem, the results of the gunfire — massive barrels exploding, enemies rag-dolling over banisters or falling off cliffs — always worth any trouble. Up close and personal melee attacks (merely accomplished with the press of the B button), are a blast to perform, too; the animations are varied enough, as seeing Jason punch a dude in the back in the head never really gets old. 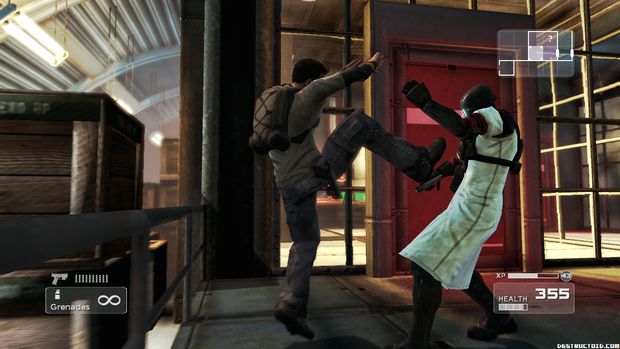 Playing on the default difficulty mode, Shadow Complex isn’t particularly challenging. While some of the “boss” battles are tricky, the in-game map makes exploring the world — especially when it comes to your main objectives — a cinch. By default, the game will show you a blue line on the map that will indicate where you’ll need to go next to further the story, which can give the game a linear feel. While the line can be turned off for those who’d rather wander aimlessly, it doesn’t much matter — chances are you’ll want to explore every nook and cranny of the map regardless, charting new territory and looking to pick up 100% of the in-game items.

Also of note is the game’s wicked cool take on stat and achievement tracking. Things like how many enemies you’ve performed a melee attack on or mini spider bots you’ve kicked are tracked, and you’re shown updates as they happen. Taking a page from Burnout Paradise, the game features an on-the-fly leaderboard that will let you know in real time how many headshots you’ve nailed, for instance, versus your friends. It’s a small but awesome feature that could add a few hours to your play time, depending on how many competitive bones you have in your body.

In regards to play time, my first run-through of Shadow Complex took me roughly six or seven hours to complete. This was a casual play-through, as I took my time exploring the world, picking up out-of-the-way items when I felt like it. My second time through, I powered through the game, barely bothering to stop for much of anything; I completed it in a little over three hours. While I’ve yet to get that coveted 100% play-through, it’s not unreasonable to think doing so could kick the game time up by a few hours.

But the Campaign story mode isn’t all there is to see and do, either. There’s also the “Proving Grounds” challenge modes, three sets of them, with each trial tied to its own leaderboard. Roll this into the total gameplay time, you’re looking at another few hours until completion, not even taking into consideration the competitive nature of the leaderboards. 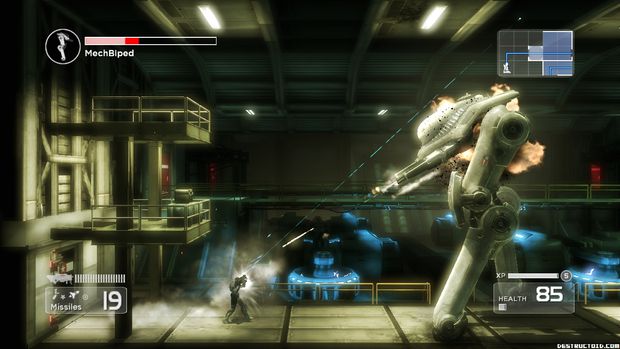 In its slick production, Shadow Complex sets a new and extremely high bar for Xbox LIVE Arcade games. Visually, the game rocks it with Unreal Engine 3.0 visuals that only show small signs of faltering during cut scenes. The game also features a superb soundtrack, from a heart-pounding action score to some haunting classical pieces that offset the mood in beautifully stunning ways.

From a pure quality standpoint, Shadow Complex is as good, if not better, than many games available at retail. But it’s “just” a $15 Xbox LIVE Arcade game, one that could have sold for twice as much, digitally or in a physical box at your local retailer.

You’ve read this far, and I can’t say I didn’t warn you — you could have (and should have) been spending that time downloading Shadow Complex. So what are you waiting for? Go.

9.5 — Superb (9s are a hallmark of excellence. There may be flaws, but they are negligible and won’t cause massive damage to what is a supreme title.)