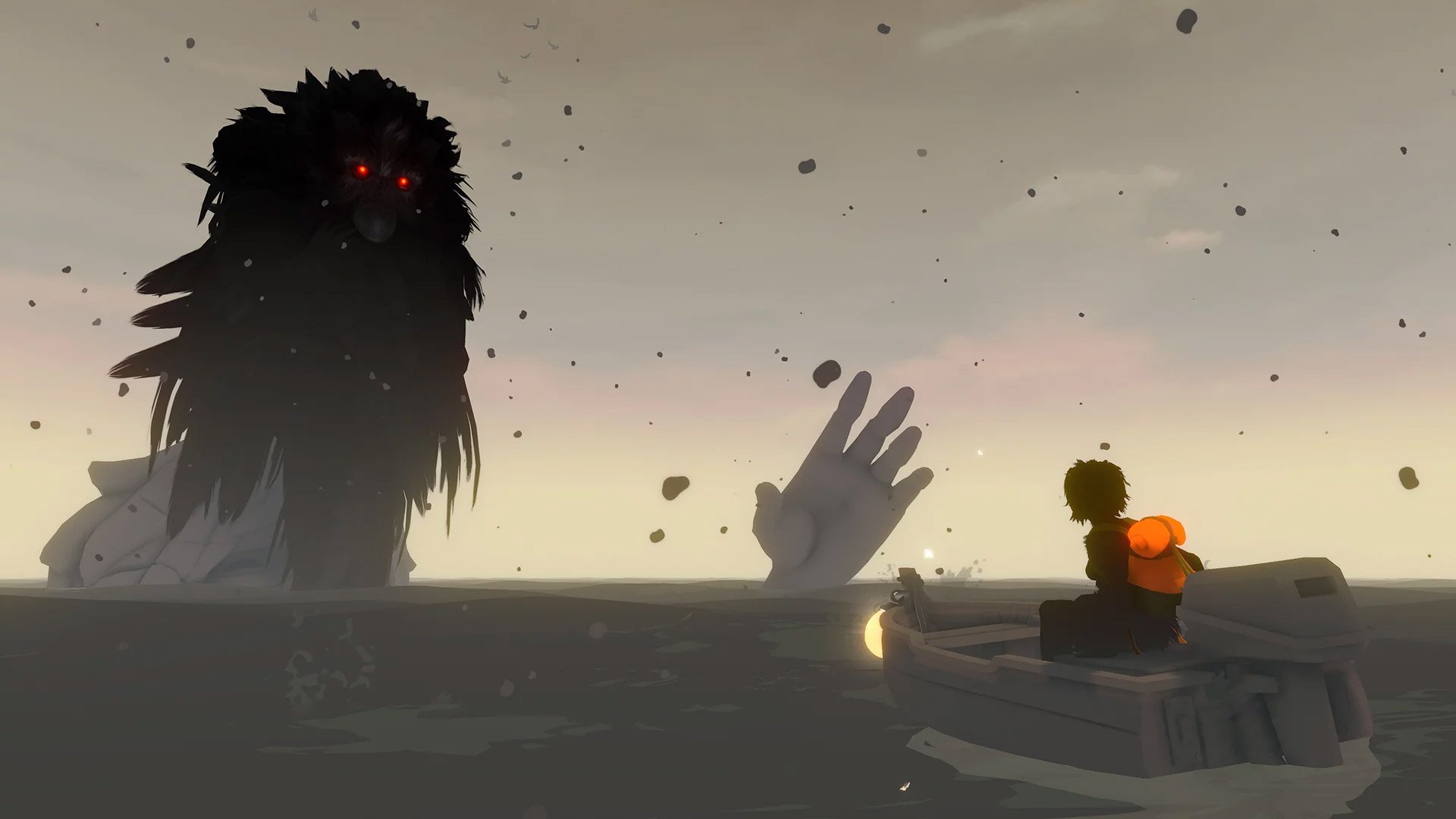 The sea is loneliness.

That’s not a spoiler for Sea of Solitude, the latest effort from Berlin-based indie studio Jo-Mei, and a game that, since its announcement some years ago, has been fairly explicit about its allegorical nature, and its willingness to tackle tough topics directly.

And now that it’s here and ready for players to take on, all that remains is to see if it can stay afloat.

Kay is trapped on a tiny boat in the middle of what seems like an endless sea. Though she sounds like a young woman, she’s got the appearance of a monster, all shadow-black fur and glowing red eyes. Around her are other, larger monsters, including a sea creature that’ll eat her if she swims for too long, a shell-clad beast yelling verbal abuse, and more besides. She needs to find out why she looks the way she does, and just what is it these creatures seem to know or realize about her that she doesn’t yet.

To reveal much more about the story would be to give away Sea of Solitude‘s essence. But suffice it to say that if you think Sea of Solitude is going to be a tranquil, quiet solo journey in the vein of ICO, Journey, or Rime, it’s worth remembering that sometimes the loudest voices you hear when you’re alone are the ones that come from your own mind, and the things they have to say aren’t always calming or meditative.

The game doesn’t play coy with its themes of isolation, loneliness, and the troubles it can bring. Self-loathing, marital strife, bullying, suicidal leanings, estrangement and more rise front and center, as the game’s chapters arrange themselves around the turmoils of both Kay and the people close to her. Virtually every image in the game can be picked at for underlying meanings. A reptilian creature with a maternal expression, covered in furry black tentacles. A house-sized crow crying glowing tears. A majestic creature wearing a mask of ice, cracked to reveal something darker underneath. The sea, of course, and the way the environs swing wildly from dark and foreboding to a beautifully rendered pleasantness that rivals the best output of Zelda series.

Somewhat less serene is the writing, which is straightforward enough in its messages as to be practically blunt, leaving no room for interpretation as to what Sea of Solitude and its developers have to say. This might be a turn-off for more players seeking more sophistication, but for me, the dialog and cutscenes came across as striking for their lack of pretense, their willingness to up and just say their piece a refreshing reminder that there’s space in the medium for a game that puts it out there, simply and bluntly. For some, these messages Sea of Solitude practically yells at their face as they play might be just what they need to hear, unfiltered by the abstractions and hinting nature of some of its contemporaries.

Of course, that deliberate lack of elegance can run against a work as well as for it. For Sea of Solitude, that means somewhat mixed messages resulting from a lack of unified focus in its stories. Each set of chapters deals with one person close to Kay, and their respective struggles, but in practice, the use of Kay’s character as a nexus of sorts for these troubles doesn’t work quite as cohesively as it could if Kay had been more central to the narrative. We are in Kay’s head, after, all, so it wouldn’t be inappropriate if the story were more about her than it is now.

If anything might qualify as something of a letdown with Sea of Solitude, it’s that the game’s overall mechanics don’t really deepen or evolve too much over its four-hour-plus runtime. It’s hardly a chore to play thanks to fairly refined (if simplistic) puzzle-platformer gimmicks, but they alone won’t save Sea of Solitude for a player that’s not interested in the narrative,or one that’s looking for extensive replayability. Despite the presence of some collectibles, it’s not the type of game to stick with beyond the credits reel.

Sea of Solitude stands out as heartfelt, almost painfully sincere, so much so that I hesitated to actually put a score on this review at all. It felt almost crass to do so, like being allowed to read a relative’s diary, only to give it a thumbs-up or -down. Though engaging gameplay and meaningful messaging aren’t mutually exclusive in games, Sea of Solitude is squarely one of a growing number of titles that challenges the notion that “fun and entertainment” should be a game’s main priority in every case.

[This review is based on a retail build of the game provided by the publisher. Note that Russ Pitts, who was a writer credited in the game, previously worked for our parent company at Escapist.]