A superposition of good and bad

“Schrödinger’s Cat” refers to an old physics thought experiment that highlights the weirdness of the quantum theory. Though it generally applies to very small particles, a device could be designed that leverages the probability of a particle’s decay, triggering the death of a hapless kitty. As a result, the cat exists in a superposition of states; it is simultaneously alive and dead, and only by observing the cat does the superposition fall apart into a single state.

On that note, it’s fitting in a way that Schrödinger’s Cat and the Raiders of the Lost Quark turned out how it did. It contains sections that are quite good, using the central mechanic to create puzzling situations. It also contains sections that are just the opposite, plodding and unnecessary. The difference here is that it observing it does not cause it to become either good or bad; it just ends up being okay. 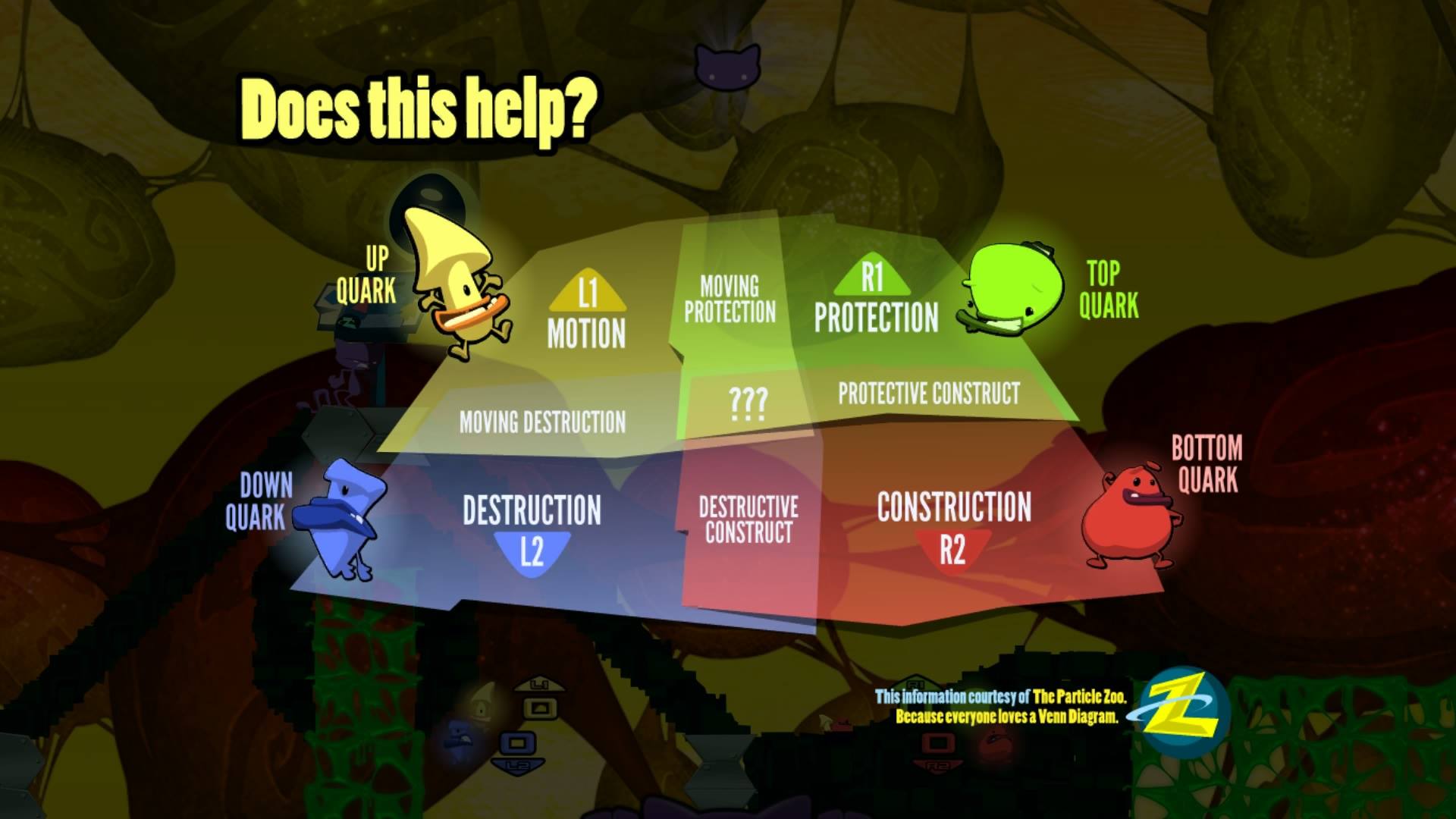 Raiders of the Lost Quark takes place in the quantum world, zoomed in so far the elementary particles of matter are visible. Previous knowledge about quantum physics is not required to play, though it does enhance the experience a bit. For instance, there are six flavors of quarks: up, down, top, bottom, charm, and strange. Schrödinger’s Cat uses the first four flavors of quark in his platforming adventure (charm and strange are much rarer), and just like in real life, the quarks combine in groups of three.

From there, quarks of different flavors can be mixed and matched. Two ups and a down (or two downs and an up) will form a missile that can be fired in any of the four cardinal directions. It ends up being one of the most useful abilities. With all of the combinations, there are 14 different abilities. Though it sounds confusing, it all comes fairly naturally, and there is a helpful quick reference on the pause screen detailing all of the different constructs.

At its best, Quark takes the quark combination mechanic and applies it to a puzzle platformer. Half of the levels are designed, giving the player a specific set of quarks to overcome a specific task. Though several quark groupings can achieve similar outcomes (the copter, base, and bounce constructs will all help Schrödinger’s Cat move upward), a limited supply of quarks means having to choose wisely, considering what will be left for other tasks.

If it were just the puzzle platformer levels, Schrödinger’s Cat would a tight little game that does its thing well. It’s unfortunate that between the puzzle levels are procedurally generated filler areas. Though they still make use of the quark combination mechanic, the abundance of quarks takes away any sort of interesting decision making or a need for much forethought. Though there are 14 different abilities, I found myself mostly using the same 4 in these sections. There’s no need for creative problem solving when the copter, missile, bubble, and net can do everything that needs to be done.

It highlights the drawbacks of procedural generation. It can be a powerful tool for two types of games: enormous sandboxes that would be unreasonable to hand-design (Minecraft) and short, replayable experiences that reward experience over memorization (Spelunky). Raiders of the Lost Quark is neither of these. The procedural levels aren’t interesting enough to merit a huge open world and aside from some new dialogue there isn’t a whole lot of reason to replay it after going through once. 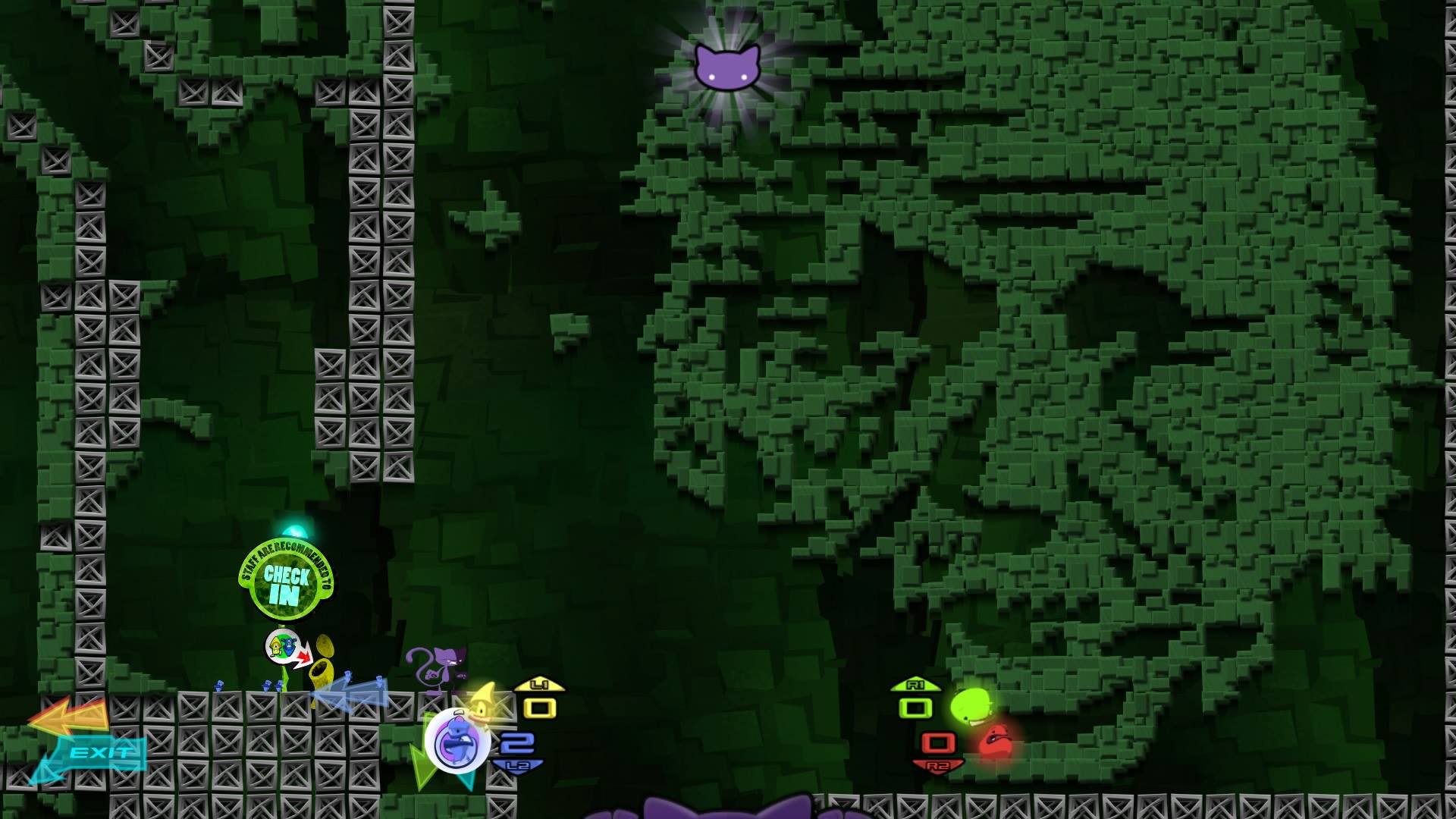 Another downfall that stems from the procedural generation is in the environmental art. The destructible terrain and the chunky grid look outdated in the best cases. At worst, the environments are almost nauseating in their color choices and design.

This come in stark contrast with the character artwork. Cutscenes have a sharp cartoon look, and the animations are smooth and visually interesting. Schrödinger’s Cat’s movement and combat animations are particularly good. The supporting cast members have really inventive designs, bizarre enough to fit well in the weird and wonderful subatomic universe.

The art for the quark combinations is noteworthy as well. Looking closely at each construct, players can pick out which quark is performing which function, as they all stretch, bend, and combine together. It even helps from a gameplay perspective, where each design is memorable enough on its own that it helped me recall which quarks to summon for a particular ability. Even with the ones I used less frequently like the parachute, I can picture which colors go into it and use that to activate one without having to pause for the reference. 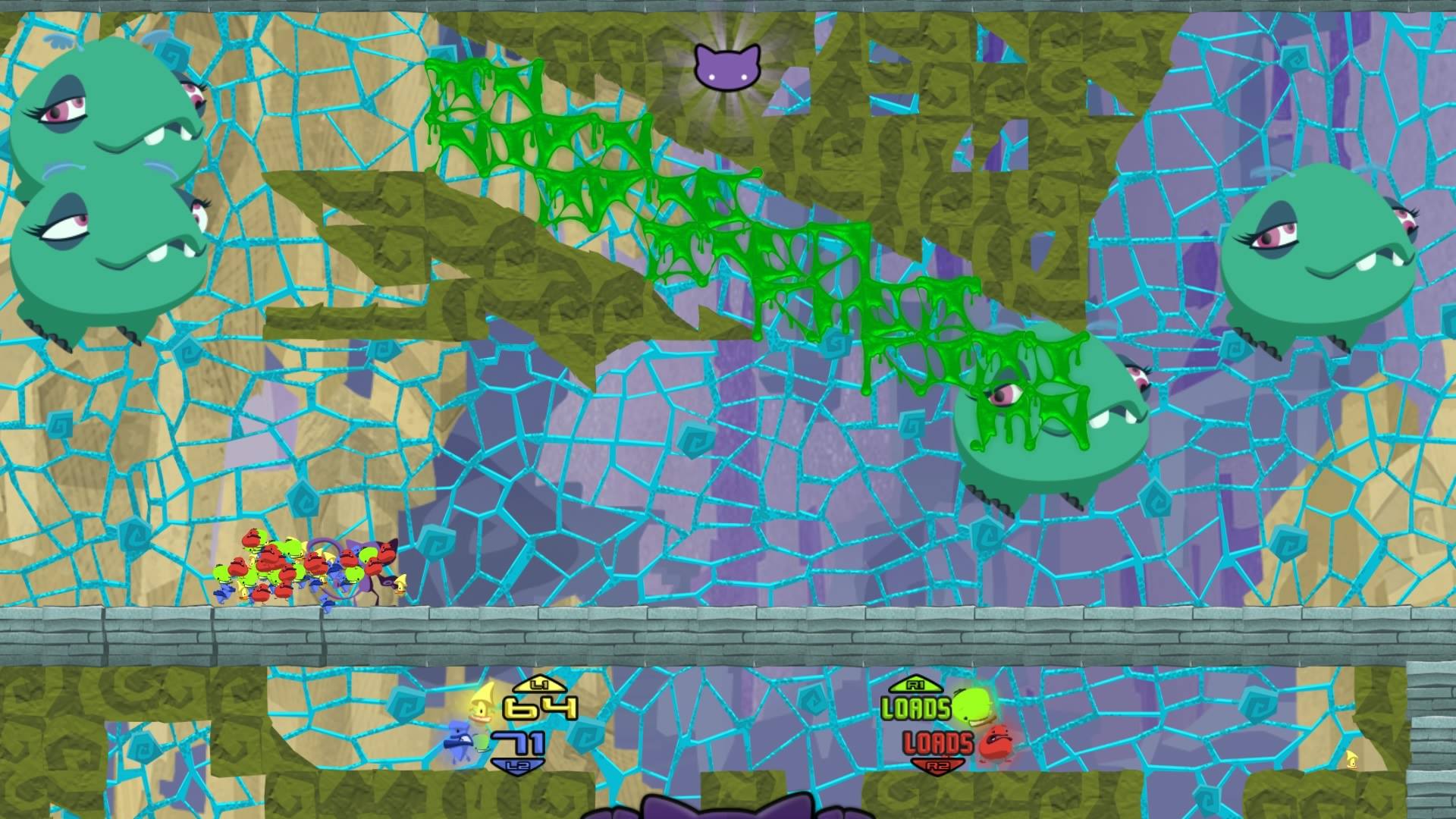 Though the overall story is silly, the writing is good. Comedy in games is difficult, but Raiders of the Lost Quark had me laughing out loud a few times. That said, I’m a science geek, so your mileage may vary when it comes to the physics jokes.

On a more disappointing note, I did run into a handful of notable bugs during my play through. On multiple occasions I got stuck in the level geometry. Sometimes there would be a creature listed for capture but that creature wasn’t actually present, leading to unnecessary time wasted scouring the area. The Bosons were especially hard to work with; they are supposed to attack one another when brought too close, but I had several that wouldn’t budge. None of these issues were gamebreaking; a reset to the last checkpoint or leaving and returning to an area fixed all of them. They still hurt the experience through wasted time.

None of those waste as much time as the procedurally generated levels, which are easily the biggest flaw in Schrödinger’s Cat and the Raiders of the Lost Quark. They take up about half of the play time, present very little worthwhile gameplay, and feel like a drudge by the end. If it cut all the fat and featured only the smart puzzle-platforming found in the hand-designed levels, Raiders of the Lost Quark would be a leaner, more engaging, and ultimately much better game.