Anime action games can be a certain kind of comfort food. While I normally find it in the more RPG roots of the Tales Of series, there are plenty of more action-oriented games like God Eater and Freedom Wars that hit the same category as the next-gen Scarlet Nexus.

Scarlet Nexus certainly has RPG roots, with inventory to manage, character abilities to upgrade, and personal bonds to strengthen for both narrative and gameplay rewards. It is also an action game, a really fun one at that. But where the monster slaying and fighting holds up, the story and structure ends up muddying the impact. 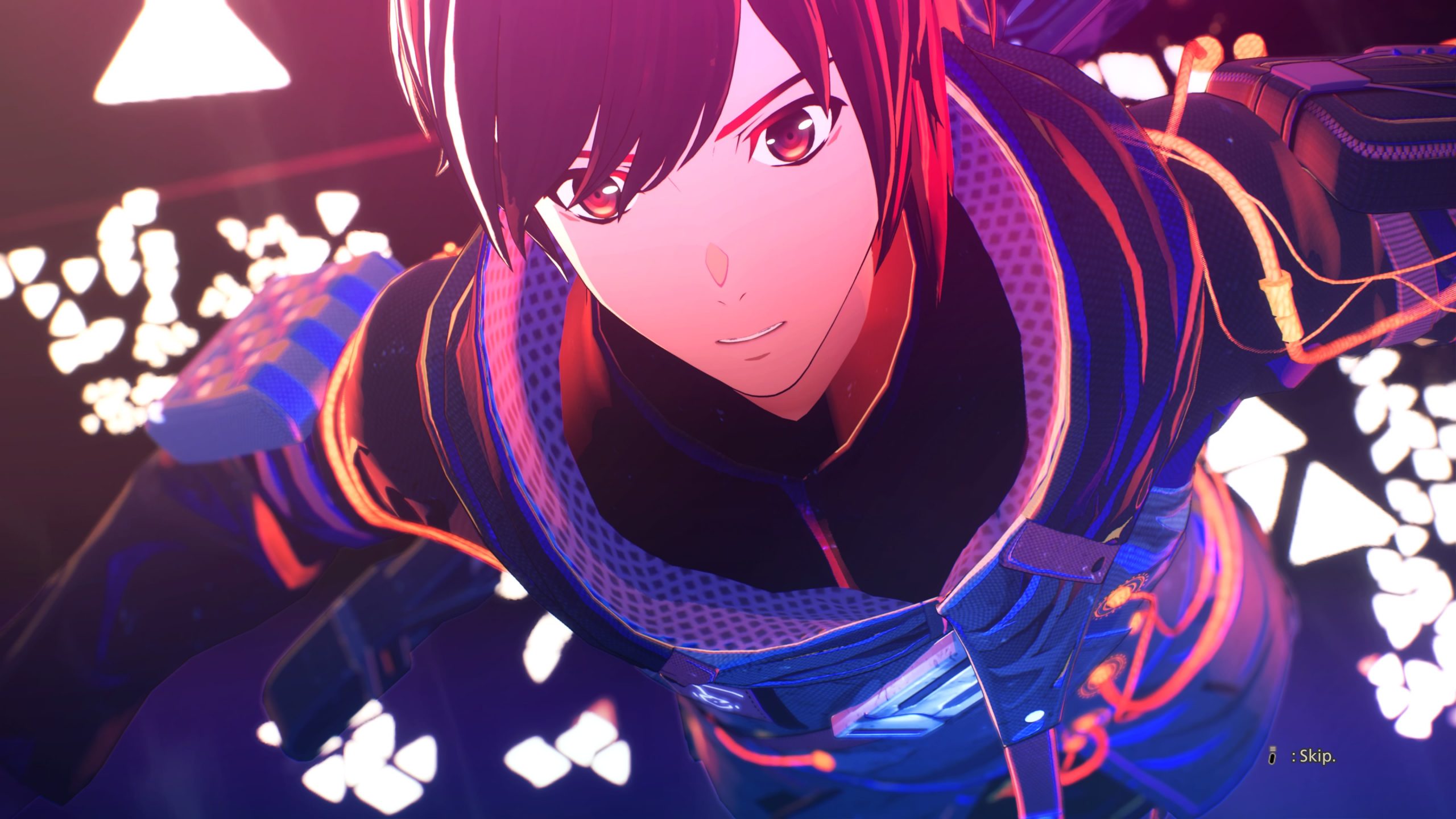 The world of Scarlet Nexus is all about brains. This futuristic vision of Earth seems vaguely cyberpunk, but rather than focusing on tech or hardware, the actual conduit is psychic power, as the brains of citizens and soldiers alike are largely all enhanced with brain power, as well as connected by an almost telepathic version of the internet called PsyNet, which establishes connections between people’s brains.

Most of the powerful brain-havers join the OSF (Other Suppression Force), a militarized group dedicated to fighting the Others, a species of monsters that rain down from the Extinction Belt and terrorize humanity. Within this, there is a cavalcade of terminology and jargon to pick up on in the first few hours of the game, and in several cases it gets pretty unwieldy, especially referring to the monsters as Others.

At the outset, you choose whether to play as Yuito Sumeragi—a descendent of the founder of New Himuka—or Kasane Randall, a prodigy recruit, as they both join up with the OSF. These two remain the focal point of the story throughout the game and both have psychokinesis (telekinetic powers), but they do have their paths split for large portions of the story. You can still get the gist of things in a single playthrough as characters will inform you what’s happened elsewhere, but if you want to experience it firsthand, you’ll need to play through each route.

For my own review, I chose to go with Yuito because he pretty much radiates anime protagonist energy, and it took about 30 hours to see the credits roll. This isn’t necessarily a massive, 80-hour RPG undertaking, but it’s still fairly meaty for an action game, and that’s a split that Scarlet Nexus sits on for most of its runtime.

As an action game, Scarlet Nexus starts off fairly straightforward. There are light and heavy (charge) attacks, while a tug on R2 charges up a psychokinetic attack, flinging nearby debris at enemies. These attacks were split between basic strikes, like lobbing some foundation or a barrel at an Other, and more involved environmental attacks that can do more damage, apply status effects, or even initiate special gameplay segments; those also required more time to charge up, could be interrupted, and often involved a quick-time event.

The interplay of these techniques turns into a careful dance of attacking and blasting with your mind, as Scarlet Nexus encourages the player to vary up their attacks to deal crush damage, eventually breaking a stagger meter and initiating a Brain Crush, which instantly kills regular enemies and does massive damage to bosses.

Its result is really, really fun. Scarlet Nexus starts small and then starts to layer on technique after technique, until you’re darting around a battlefield, slashing and then backstepping to fling a rock or dump a barrel of oil on a monster’s head, or charge a chandelier up into a spinning top of destruction. Then, when the meter breaks, Yuito leaps in for a big cinematic crush, telekinetically ripping out the lightbulb-brain of an Other and shattering them. It’s anime as heck. 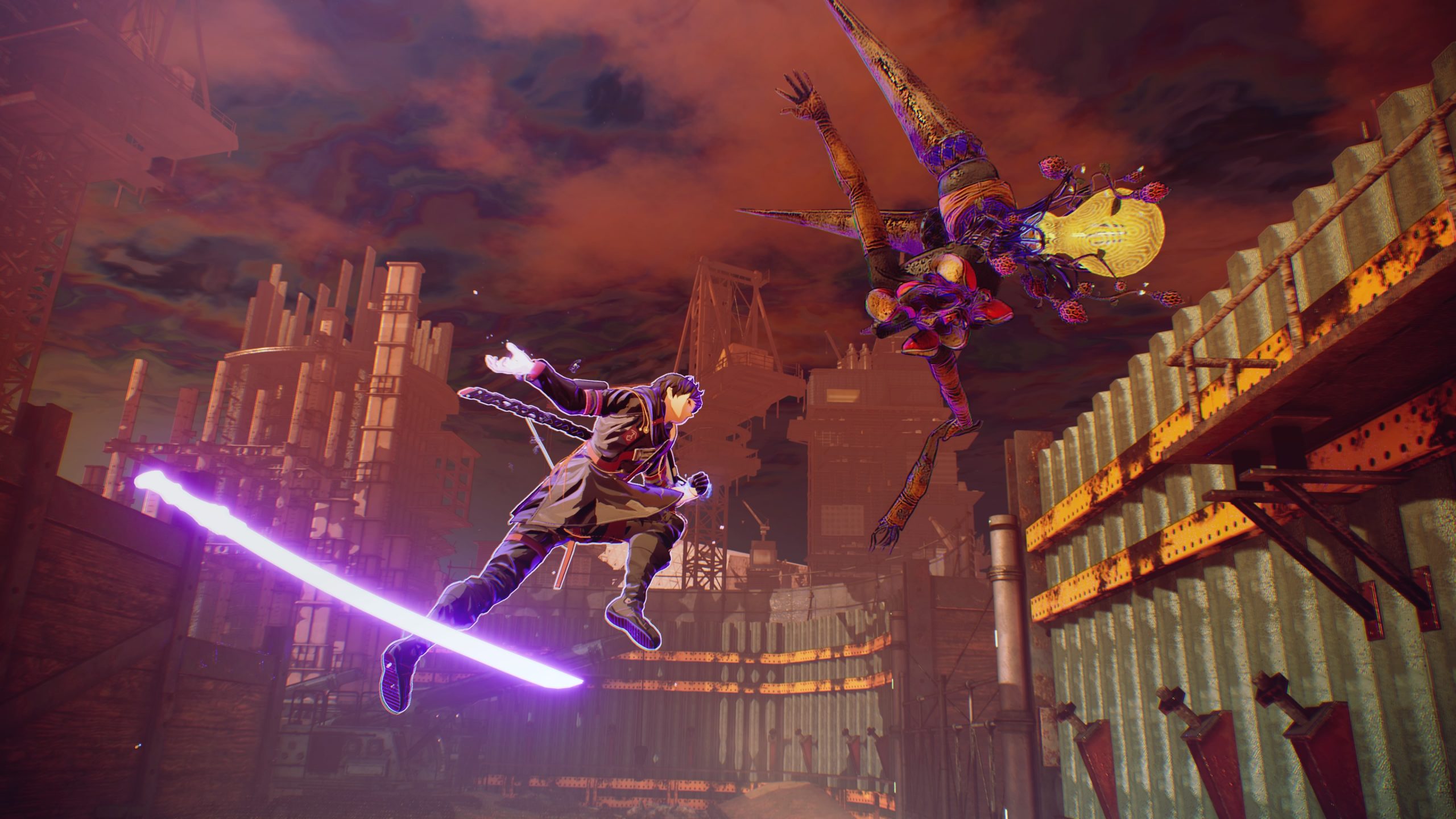 Combat can also be extremely daunting as time goes on, because on top of all the things Yuito can do I just mentioned—as well as managing item usage on a sometimes-frustrating D-pad menu—there’s also the SAS. The Struggle Assist System lets you “borrow” the powers of a teammate, adding new characteristics to Yuito’s abilities. Hanabi adds a flame element to your attacks, so you can light that oiled-up Other on fire; Gemma makes your party impervious to attacks with his “Sclerokinesis” ability; and others can turn you invisible, help you spot invisible enemies, or even make copies of your protagonist.

These play back into enemy types, as Others will start to develop unique defenses. Any given combat will see you adapting on the fly to what’s presented: using Duplication to fling a hail of debris at an Other to break its armored shell, or employing Arashi’s super-speed to quickly close the distance on an enemy that turtles-up when you approach it. It’s very fun, especially when you can mix and match SAS powers after unlocking the ability to activate multiple at one time, and maxing out relationships can open new combo attacks and assist options.

But add on Brain Drive, a meter that slowly builds up until the protagonist can enter a heightened state of power, and Brain Field, which is essentially a superpowered mode with its own set of rules, and Scarlet Nexus‘ combat can seem pretty overwhelming from the outside. Yet as it trickles all these features in, there’s a gradual slope to learning things. It did mean some tutorials were still rolling out fairly late into the story, but in the moment, it felt really good to unleash psychic mayhem on Others.

At certain points in the story, you also get to skirmish with other psychic-powered combatants, which were the highlight of Scarlet Nexus‘ combat for me. Fighting another team of brainpowered supersoldiers is tense, as they have their own arsenal of special abilities, making them pretty dangerous. As much as I enjoyed bashing monsters, having psychic soldier team battles was its own kind of fun. I have my nitpicks with the combat, mostly in the unwieldy item menu and a camera and lock-on system that didn’t seem to always point me in the right direction, but Scarlet Nexus‘ combat makes for some great spectacle action with plenty of highlights and some good boss fights. 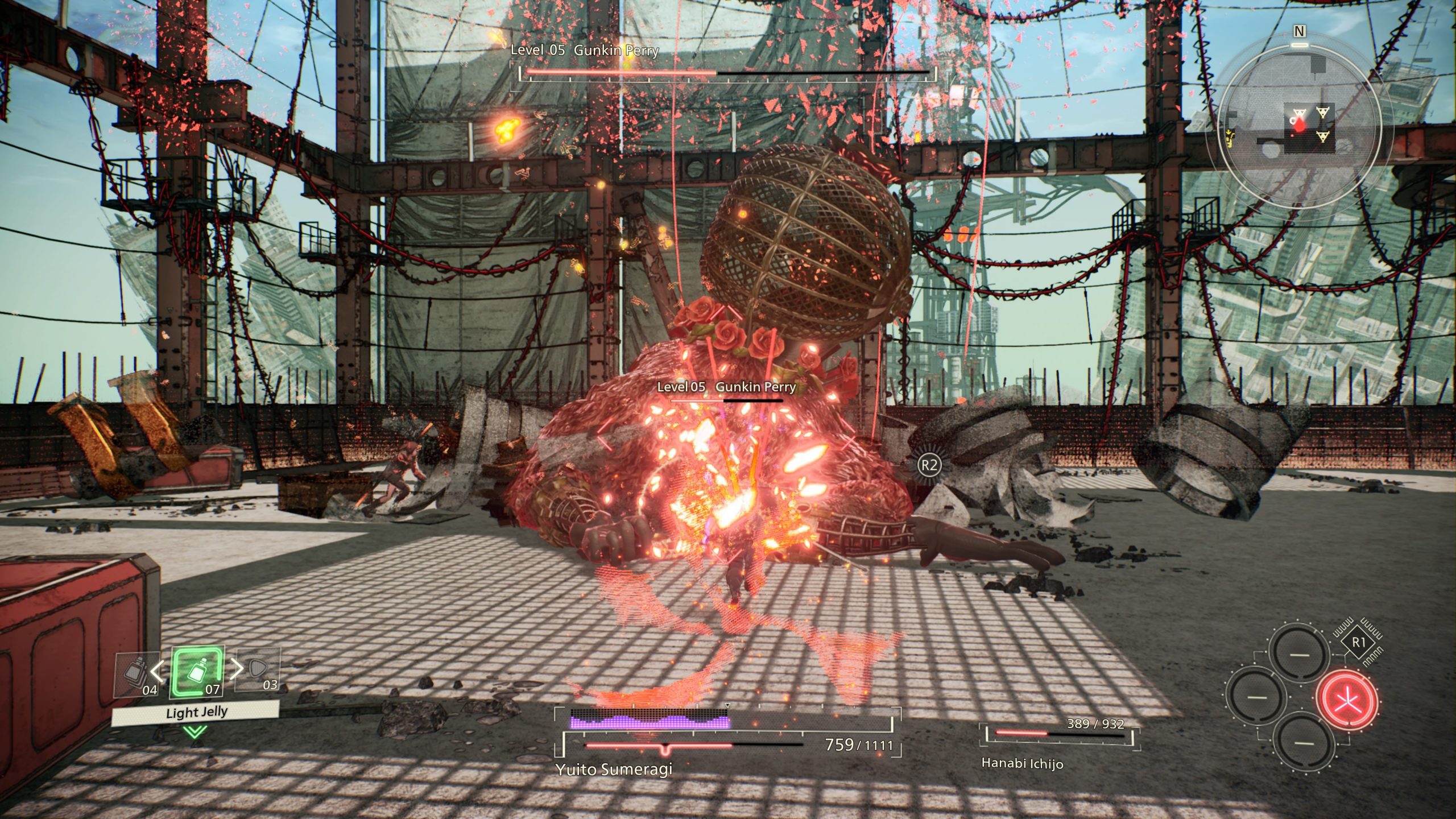 Where it falls flat is what’s built around the combat, mostly in the story. It’s not strictly bad, but Scarlet Nexus‘ narrative has trouble moving things forward. It starts off very strong, with a typical battle anime setup giving way to some shocking twists, and lines get drawn in the sand after a massive disaster opens up the sky. As the story wears on, it becomes an escalating series of chasing the “truth” and the people pulling strings, and the people pulling their strings, and so on. It was enough to get me from arena to arena, but after a strong opening, it never quite got me re-invested.

Outside a couple main story moments, most of the solid character writing in Scarlet Nexus happens in its Bond Episodes. Between phases of the main story, you can chill at your crew’s hangout and give gifts to your team members, which become decorations for their personal corners. Eventually you unlock new levels of Bond with teammates, upping your collaborative battle potential, but also leading into Bond Episodes, which are individual stories between the protagonist and the character, similar to Persona‘s Social Links.

Though some delve into usual fare like rivals becoming friends or gaining confidence, all of the Bond Episodes really stood out in their own right, especially because some of them actually deal with societal issues within the Scarlet Nexus world. Gemma’s efforts to help retired psycho-soldiers is a highlight with real-world parallels, and others like Luka’s and Hanabi’s wound up really resonating with me. It especially helps that they also build out the world with actions and events, as Scarlet Nexus does tend to have characters dictate lore at you early in the game.

Like the dictated exposition, there are a number of other issues that build up over time. Sidequests exist, but I stopped chasing them after their rewards—both in resources and in additional story—seemed fairly inconsequential. There’s a decent variety of areas to battle through, and some are really great, like the creepy old OSF hospital, but the impact is a little lost when the back-half of the game has you retread these areas again, and then double-back if you want to farm specific resources for weapon upgrades, item exchanges, or gifts to give to squadmates. 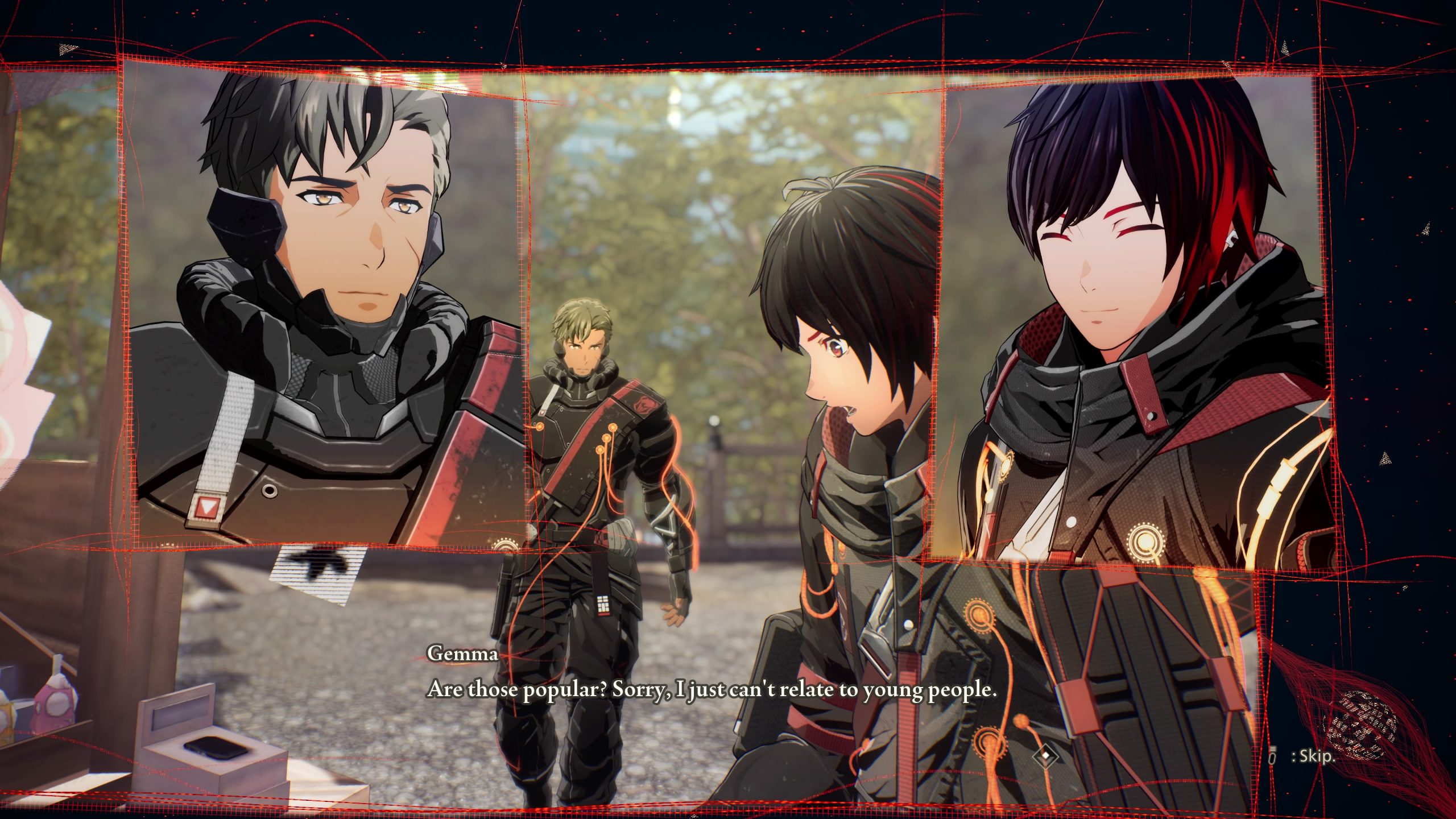 This is also a story that’s going to appeal to the anime fans more than anyone else. It’s got some style to it for sure, and the art is absolutely fantastic; the anime visuals and cut-ins when you activate SAS powers look great, and the Others are beautiful body-horror abominations. Some of them get really weird and disturbing, and it works very well, and they have some fantastic names too. The music, I also have to mention, has some real jams in it, and fits the vibe of the game really well.

But Scarlet Nexus is, story-wise, mostly what you would expect from an anime-styled action game. Yuito is an eternally idealistic protagonist with a superpower and the determination to overcome any obstacle, bolstered by the power of friendship. For some, myself included, this is pure comfort food. It also isn’t doing anything revolutionary. 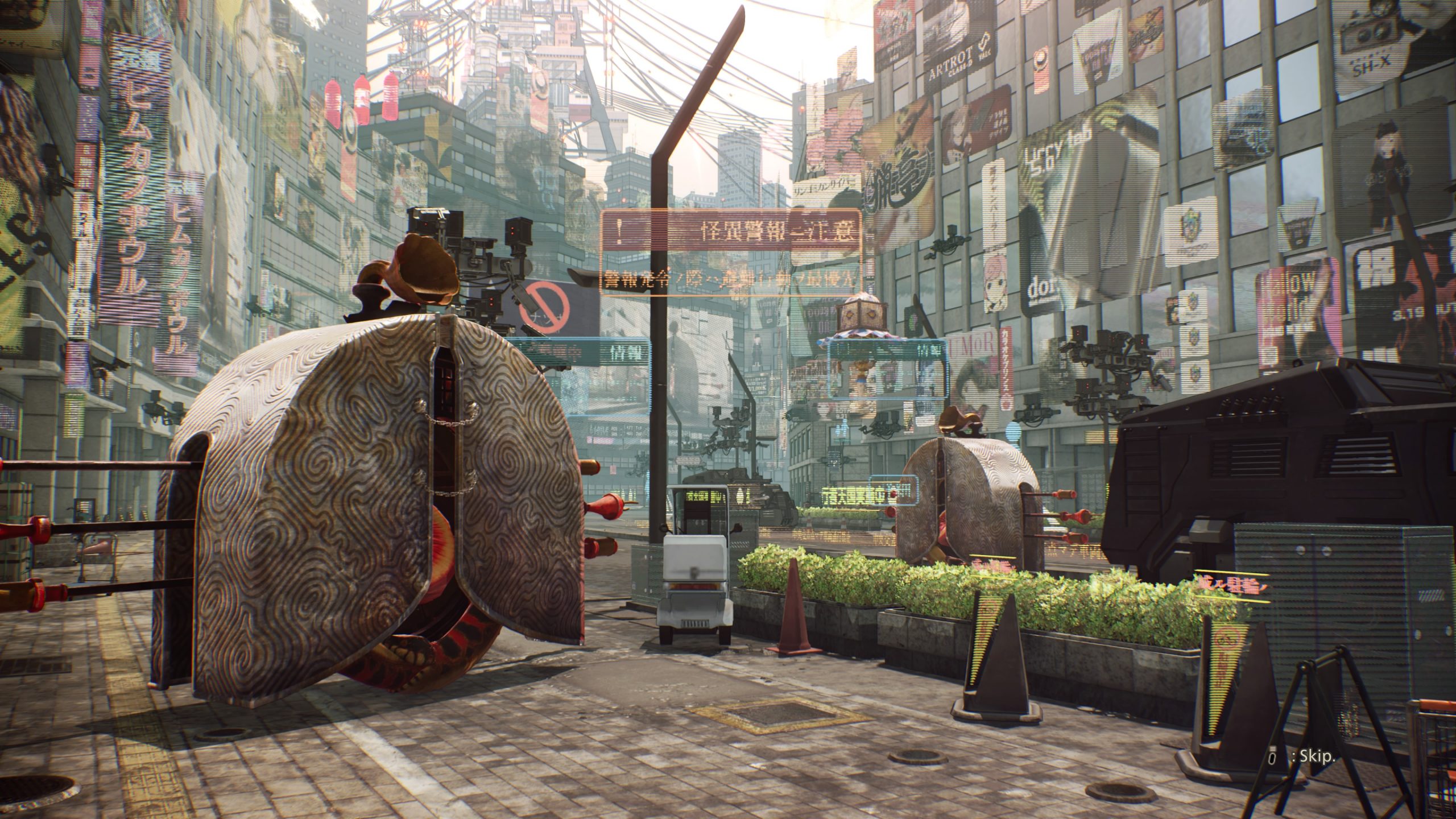 It’s ultimately the pacing, the rough incongruous bits of story, and lack of major payoff for any additional investment I put in that hurts Scarlet Nexus in the end. I really dig the combat and the look of this world, and the crunchy, edge-of-my-seat fights against ever-increasing odds is what kept me trucking on through the end of the game, more so than its story pulls did. As much as I enjoyed telekinetically surfing my way through giant monsters and slamming them in the face with a vending machine, it also highlighted how my personal investment in seeing it all through was drifting away, and how little annoyances like a finicky item menu and sometimes erratic camera can build up over the hours.

Scarlet Nexus is, ultimately, some gorgeous, action-heavy comfort food. It is Saturday morning anime in game form, and while it will struggle to hold your attention from a story perspective, it’s also a good way to lose 30 hours in a fun combat system. It’s not a narrative powerhouse, but if you need a vehicle for bashing monsters with the might of your brain, it’ll suit that need just fine.