There’s something about a series that doesn’t feel the need to make a ton of social commentary, or really feel grounded in reality. The Saints Row series is like if the worlds of The Naked Gun and Grand Theft Auto merged, and the result is a unique blend of zany comedy, copious cursing, and ultraviolence. Saints Row: The Third is one of my favorite games of all time.

The series hit its peak there, with an almost perfect balance of the real, the absurd, and the fantastical. Saints Row IV was still a blast, but I felt it lacked the magic of its predecessor. So it’s understandable that I was therefore jaded by the time Saints Row: Gat out of Hell came down the pipe to review. But wherever you are and wherever you go, there’s always gonna be some light.

With that said, plenty of it shines through in this standalone expansion. 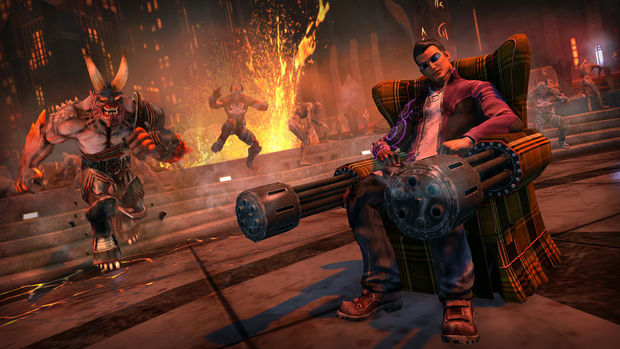 The game opens on the gang aboard the Zin Ship during a celebration of Kinzie Kensington’s birthday. During the festivities, Matt Miller produces a possessed Ouija board that was previously owned by Aleister Crowley, and it opens a portal to Hell. The Boss (your player character in the previous Saints Row games) is sucked through the portal and kidnapped by Satan. Johnny Gat and Kinzie follow through the portal to save their friend, and upon arriving in Hell go to the biggest building in sight.

Ultor HQ. Dane Vogel, head of Ultor Corporation and previous adversary of the Saints, has started his business anew in Hell and lets the duo know that Satan has arranged a marriage between The Boss and his daughter. Vogel has big plans to corner the real estate market in Hell, and he needs Satan out of the way to do it. He presents Johnny Gat with Lucifer’s Broken Halo, a powerful artifact that imbues the user with fiery wings and arcane power, to assist in the assassination of the Dark Lord.

All of the previous statements contained a lot of names that you may or may not remember depending on which games, if any, you’ve played of the series. This is one of the biggest things that marks this as a standalone expansion. This game is very self-referential, and unlike the main entries in the series doesn’t ease players into the world of Saints Row. It makes the assumption that you’ve at least played Saints Row IV, and spends little time on exposition or background other than some short illustrations and voiceover.

This was a bit frustrating, because even though I’ve played through all the Saints Row titles, it’s been a while. It would have made the game more inviting to have at least a short flashback when meeting a character from a previous title, and unfortunately many players might miss out on some of the enjoyment and nostalgia from not having just a bit more context. However, there are a few new characters, and they are a blast. Shakespeare, Vlad the Impaler, and Blackbeard all join the cast, and although this entry is a bit short, I hope that future iterations will introduce as interesting of a cast as this one did.

The setting is where this game really shines though. Hell looks, well, hellish. Instead of another romp through Steelport, we spend our time in New Hades, which is dominated by the Ultor Tower. It’s sometimes hard to notice flying and sprinting at high speeds, but different sections of Hell have different aesthetics, and the whole map, although smaller than Steelport, feels more alive and organic from all the unique buildings.

Gone also are the nameless civilian fodder, replaced by “Husks,” which are the souls of the damned who are made to feel pain for all eternity. The police are instead demons who drive monster trucks, and there are a host of flying, shielded, and gigantic enemies, all with their own styles and methods of attack. All in all they made a much more entertaining and interesting adversary than the Zin, and the whole world feels much more polished and finished than Saints Row IV’s Steelport simulation.

Much like the last game, you have access to a host of superhuman powers. With Lucifer’s Broken Halo you can sprout wings to glide, sprint at high speed, stomp the ground with various elemental powers, call upon demons to fight for you, and turn enemies to stone with power blasts. Whether in a simulation or powered by a demonic artifact, the result is much the same: you’re pretty much the most powerful being in Hell. 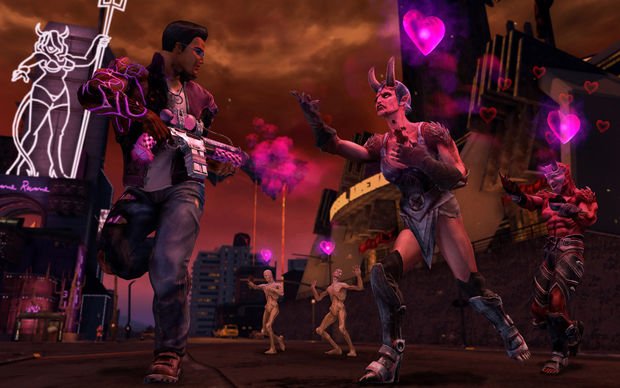 I think powers are much more interesting in Gat out of Hell. Something about the last game’s powers being due to computer hacking and being trapped in a simulation was insanely boring. These games are a zany good time, but when I play something like this I like to feel as though I’m actually affecting the world I’m playing in, and getting powers from the broken crown of the Morning Star himself is way cooler. I do have a bit of a qualm with the missing character customization element, though. I understand that the game centers around having to play as Kinzie or Johnny Gat; but it would have been nice to at least change their outfits or accessories.

So everything seems pretty positive about this game, right? It’s a high quality production, and totally awesome, so what could go wrong? Well, that cool setting, low price point, and interesting gameplay came at a cost, namely in the form of content. Saints Row: Gat Out of Hell is short. Really short.

The first time I saved my game I had been playing for about an hour, and I was shocked when the screen said that the game was already 14% complete. I figured it was like Saints Row IV where that number didn’t really mean a lot or indicate how much content was left other than at a superficial level. Well, I was wrong.

Gat takes about 6-7 hours to complete the main plot, and it could probably be easily taken to 100% within 12-13 hours. Honestly, I’ve paid $20 for a lot less fun, and although the game is short, what is there is solid gold. Plus, if you’ve never played Saints Row IV, or just want it and all its DLC on latest gen consoles, you can get Saints Row IV: Re-Elected, which includes this expansion for about $50. 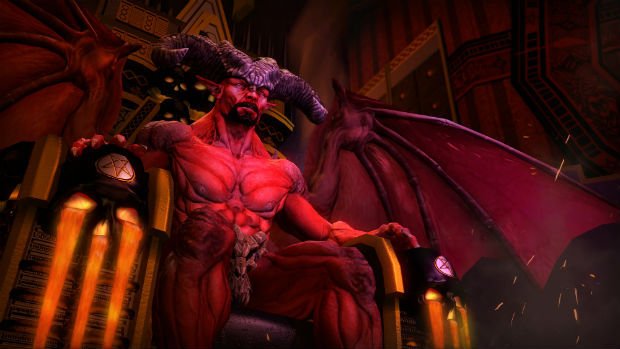 Gat out of Hell was a great swan song for Saints Row IV, and it is now one of my favorite entries in the series. There are plenty of games out there about depression, sexuality, violence, politics, and so on, and sometimes it makes me tired. I love Saints Row because I never have to deal with any issues within. There’s no agenda and no life lessons to learn. There’s only pure escapism. which is what games are meant for in my view.

If I wanted to worry about all that, I’d just go to a college campus and listen to people complain for a few hours. As it is though, I hope that more developers take a cue from Saints Row and realize that it’s still okay to tell jokes and implement cartoony violence that’s still ridiculous and fun. I know gaming as an industry is maturing and people want to present new ideas and make statements using the media, but luckily, whenever I feel like I need a break, I will have Saints Row proudly on my shelf.