“Space is big. Really big. You just won’t believe how vastly, hugely, mind-bogglingly big it is. I mean, you may think it’s a long way down the road to the chemist, but that’s just peanuts to space.” – The Hitchhiker’s Guide to the Galaxy

Humans are explorers. We have an inescapable drive toward discovery and, as we edge closer to running out of things to explore in our world, our fascination with what may lie beyond it has only increased in fervor. We tend to romanticize space exploration in our entertainment, but a more likely reality is that humans traveling the stars will be slow, isolating, and dull, punctuated by fleeting moments of confused excitement.

No game I have ever played better expresses that reality than RymdResa. 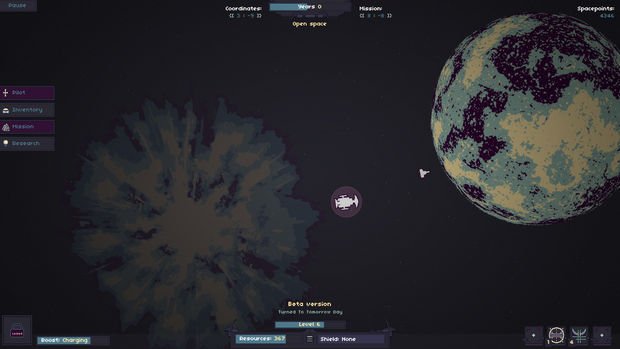 RymdResa tells a story of humanity seeking new life for itself in the cosmos, told in three parts. As the game begins, Earth has been destroyed by an asteroid and the player is an explorer roaming a seemingly limitless, procedurally generated universe in search of a planet to colonize and ensure mankind’s survival. Successive chapters have the player collecting resources and undertaking a larger journey to a separate universe, each expanding the gameplay with different mechanics and challenges.

Early on, the game is about survival and that survival feels very much at risk. This is when RymdResa is at its most entertaining. Launched into space with the only most basic of ships, the player must conserve and protect their resources while traveling to nine sectors or they will die, lost and forgotten. Resources, in this case, means fuel, which doesn’t deplete over time of its own accord, only used when the ship’s thrusters are employed.

Other things you encounter in space do affect your resource count, however. Collisions, mines and attacks from passing ships to can cause a considerable loss, and that’s likely to happen quite a bit due to some design aspects working together to make it very difficult to understand how fast your ship is moving and predict collisions. The empty space environment provides little visual context to give that information to the player and a narrow, never changing view distance from the ship makes it such that when objects appear on the screen, they are as likely to fly right into you before a reaction is even possible as creep into the frame.

Frustrating as this is (and it truly is), it also does reinforce the fragility of the player’s situation and forces them to take it slow, further dragging out the empty gaps and feeding into the game’s overlying thematic tone of helpless melancholy. RymdResa is not subtle about what the game wants the player to feel. Cutscene narration preceding chapters and diary pods produced within them ooze nostalgic regret and longing, delivered by a distant, electronically distorted voice that sounds more like a morose robot than a human.

This first chapter in which the player is at their weakest captures that spirit most effectively, but it fades with time and progress. Even the most disastrous attempt to complete a voyage is rewarded in some ways. Players earn skill points with experience levels that can improve the efficiency of resource collection, provide the ability to interact with more environmental objects and help ships to perform better, and these levels carry over across all missions once earned. Spacepoints are constantly being added and subtracted, acting as a form of currency that can be spent to launch voyages with the game’s seven other ships, and items to outfit those ships are carried in a general inventory accessible at all times.

With these systems, by the time the player makes it through the first chapter and on to the second, they’re probably pretty far along in their experience development (which caps out at 40 levels). And, suddenly, the stakes are pretty much gone. A seemingly constant accumulation of items to customize ships begins to provide all manner of attribute bonuses (introducing a whole different problem of inventory maintenance within a system desperate for sorting tools and a constant need to sell off useless junk to make room), so that while you’re never invincible, it sure can feel that way. It soon becomes the default to quit a voyage out of a sense of not having anything to do rather than because of a failure to accomplish something. 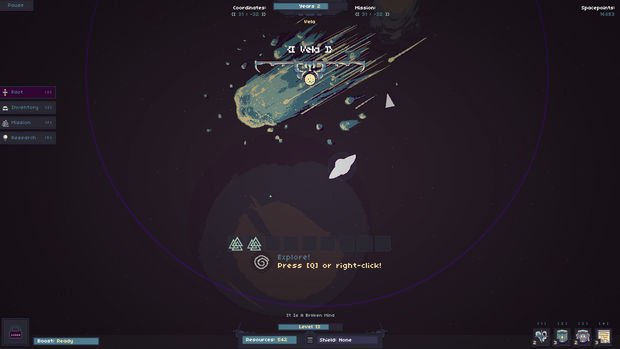 Chapters after the first have objectives which can be approached in a non-linear fashion and incremental progress an ultimately unsuccessful mission accomplishes is retained, removing all sense of urgency. What happens in them isn’t all that interesting either, as the player collects “materials” (like resources, but green and serving no function outside of the second chapter’s main objective) and faces down inscrutable guardians in a series of two-choice dialogue events where it’s rarely clear that there is a right or wrong answer, but you’re punished for choosing the wrong one anyway.

Vast as the explorable region of the game is, which uses a grid-based system of sectors to indicate player location (the number of which may well be limitless and impossible to chart due to procedural generation), there isn’t much one can reliably do within all of that space. In some ways, exploration off the beaten path is thoroughly discouraged despite the many opportunities presented. Teleporters dotted seemingly at random will send you off to a far flung sector, but what’s to do once you’re there? Drift back through possibly many hundreds of sectors, the vast majority of which will have nothing in them or wander off in some other random direction and hope maybe you come across anything of interest that way. 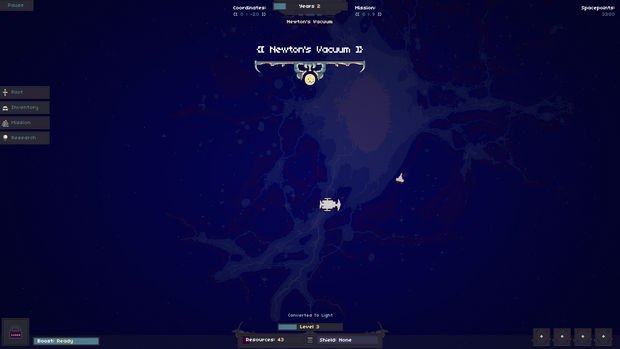 I never have, and it’s clear that there’s more to this game that I have not experienced. A collection of “Research Notes” is referenced with a menu and there’s a whole mechanic designed around using them to craft… something. I’ve never found one and wouldn’t know where to start looking for them.

Some people are going to dig into this game, absorb its extremely passive gameplay and have a curiosity which leads them to discover these things that I have not. I’m sure of that. If ambiguity and self-directed discovery are aspects of games you appreciate when they exist, and can handle one where you’ll spend most of your time not doing anything, you’re the audience RymdResa is looking for.