Growing up playing side-scrolling action games like Oddworld: Abe’s Oddysee and Another World has cemented my love of the genre, so any time I get the chance to play another title in that vein, I jump at the chance. Enter Rocketbirds: Hardboiled Chicken.

Hardboiled Chicken is a port of the original PC game, Rocketbirds: Revolution!, with some upgrades for the PlayStation 3, including new chapters, cutscenes and a co-op mode. The original game was quite the success, and now the team at Ratloop Asia has decided to try their hand at a different platform. 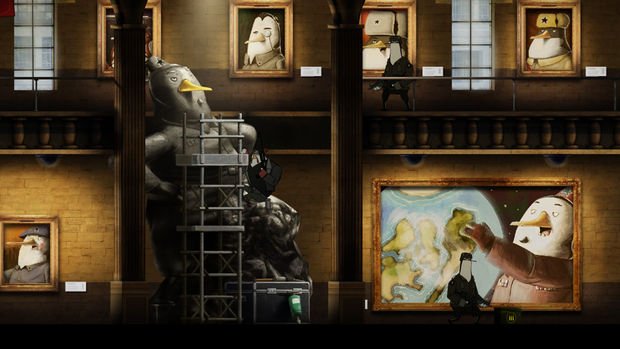 Rocketbirds: Hardboiled Chicken puts players in the shoes of Hardboiled, a rebel chicken out to overthrow the evil and tyrannical penguin army. The single-player campaign is of a decent length, with 15 chapters of action, platforming and puzzles that will probably take about six hours to complete. There is a co-op section that I, sadly, didn’t get to try. If it’s anything like the single-player portion however, it’s a lot of fun. The campaign is entirely a 2D affair, though the environment has 3D elements and, as my above statements suggest, it is an action platformer with some puzzle bits.

The controls are fairly straightforward and, considering this was originally a PC game, tight and easy to pick up. As a killer chicken, expect to do a lot of bird murdering with a variety of weapons, including guns and grenades. There are also some clever puzzles scattered throughout the levels, and not all of the solutions are obvious at a glance. One of the major mechanics of the title, brain bugs, will allow players to take control of penguins. Some of the puzzles are only solvable by controlling a penguin, which is rather amusing. Once control has switched over to a penguin, you are given freedom to explore without fear of dying. Unless you shoot another penguin, you can walk around unmolested, which is sometimes necessary. When the pressure to slaughter finally overwhelms you, fear not: until you complete a penguin-control section, a limitless supply of killable birds is provided, and once a mind-slave dies, the penguin army goes back to business as usual. 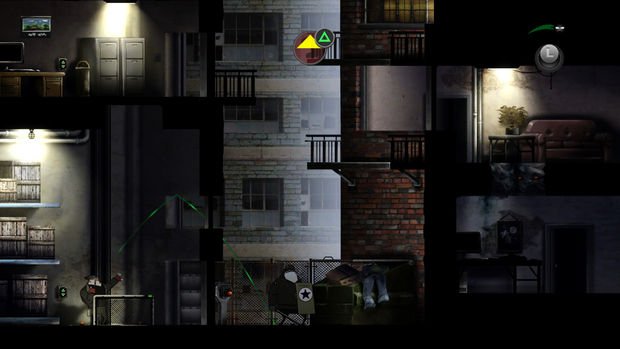 The other major part of the game is flight. There are a few levels that will require flying with rockets (because Rocketbirds), and while these sections served to add diversity to the game, they were also my least favorite. They aren’t terrible, and even though they were the least interesting bits of the game, they were still challenging. The whole point in these areas is to eliminate the flying guards, which include regular grunts and rocket-launcher-wielding penguins, in order to board dirigibles. All that is required of these levels is flying around and shooting, which sounds a bit easier than it actually was.

The camera, which started off zoomed-out to give a view of the entire area, would eventually zoom in, which not only limited visibility, but made finding enemies tricky at times. During later flight sections, five or six enemies would come out at a time, and at least two were always RPG-equipped penguins. Between trying to kill the birds, avoiding enemy fire and running away from rockets, things could get pretty complicated and death happened more than once. One thing that helped was that the rockets follow Hardboiled. It’s bad if you aren’t paying attention, but useful if you can get the missiles to hit a penguin instead of you.

There was no shortage of creativity in killing penguins. While there were a number of options on how to go about the gleeful slaughter, none of the gun choices really mattered. Although each weapon had a unique rate of fire and power output, there was never a need to mix it up, because once a penguin was hit, juggling them was easy. All the weapons achieved the same goal relatively easily. Once I found a gun that fit my play style, that was the only one I used for pretty much the entire game. 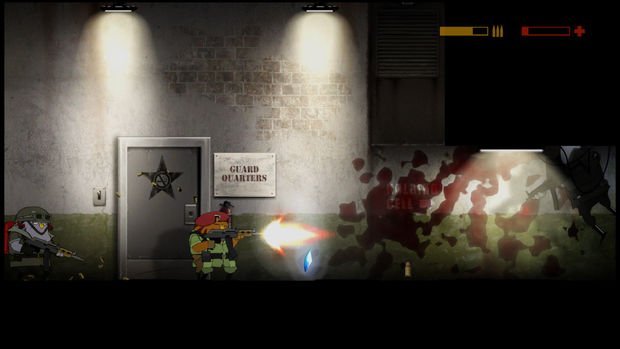 Combat was not overly challenging. Unlike in some games, I never felt that death was a punishment. Whenever I died, it was because I had done something wrong and all that was needed was a new approach. My favorite part about combat was that enemies required a bit of strategy to beat — not in weapons used, but in how the fight was handled. It wasn’t simply a matter of run and gun. Riot police (complete with shield and baton) required a different approach than grunts, or elite penguins. Despite the lack of attention paid to weapons, there was enough variety in enemies that combat never felt stale or boring.

While no motivation is needed for Hardboiled to kill penguins (do we ever really need a reason to shoot things in videogames?), he does have a back story, which is presented in cut scenes between chapters. There’s no voice acting in these flashbacks, but the scenes do a fantastic job of conveying the story without words. Plus, if there was dialogue, it would be harder to hear the incredible music by indie band New World Revolution, and the music is much better than words. Tunes by N.W.R. are about the only music you’ll hear in the game, but they fit well and there was never a need for lots of background music. As far as the story goes, while a history on our hero may not have been necessary, it is a nice touch that adds some weight to what Hardboiled is doing, and may be the only serious part of the entire game. Any other dialogue or interactions that take place within the story tend to be humorous and light. Penguins will occasionally have conversations, or think aloud, and the obvious angle is comedy. I stopped what I was doing more than once just to see what a penguin or rebel had to say. 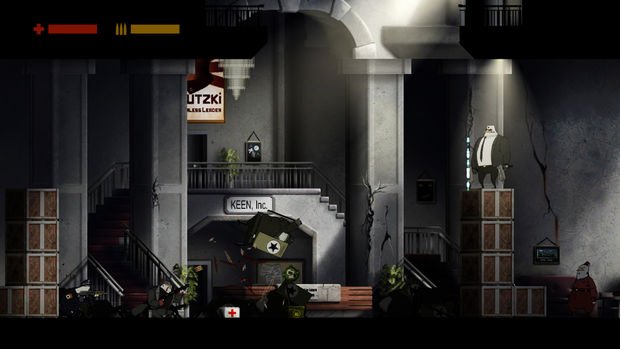 The game’s bright art style adds to the feeling that this is meant to be a fun and lighthearted experience, despite the serious tone the story can take, and the levels are varied enough that they don’t ever feel reused or overdone. There isn’t a ton of exploration, and the gameplay is fairly linear, but different paths can be found that lead to the same goal. This gives some choice in not only the way you get where you’re going, but how you defeat enemies (or sneak past them; the game offers a few stealthy routes). There are also little signs in each level, tucked into corners and out-of-the-way areas, which encourages not only exploration but retracing your steps.

The only thing that was upsetting about the entire title was its length; Rocketbirds was so enjoyable that it was sort of a downer when the game ended — which is more of a compliment to the developers than a legitimate complaint. It isn’t at all too short for the price, and with the extra unlockables and co-op mode, there is plenty there if you’re concerned about getting your money’s worth. Perhaps I’m just being selfish, especially considering five extra levels were added for the PSN release, but I want more of this game. 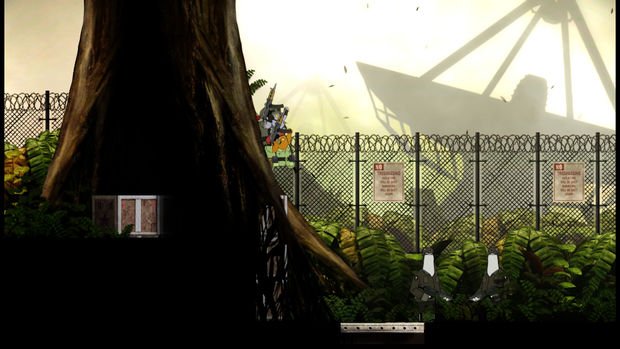 Despite my selfish demand for more Hardboiled Chicken, I am pleased with Rocketbirds overall and can’t wait to see what Ratloop Asia does next. Making the jump from one platform to another can be tricky and doesn’t always turn out well, but they did a fantastic job. Not only did they take their time making sure that the different controls worked properly and the game would look good, they added new content and gave fans a reason to pick up the game on the PSN.

Rocketbirds does everything well: the story is solid, the combat is fairly balanced, the puzzles are never too hard and there is quite a bit of replayability. No one element makes this game great; instead, all of the various pieces are put together seamlessly enough that the entire package makes the experience enjoyable. 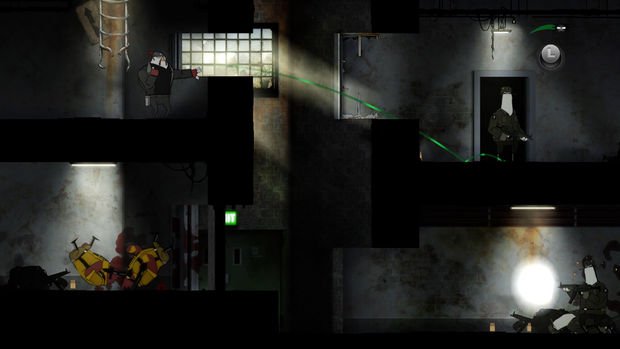 It did feel as though Ratloop Asia was playing it safe (which is understandable and hard to blame them for); it would have been nice to see them try to bring something unique to the table. The game is incredibly polished, and all of the components fit very well together, but they are all components that other games have introduced with a slightly different twist. They have clearly mastered the action platformer, now I would like to see them take it further and try something new. That is not to say I did not enjoy playing it; far from it. It was an incredibly entertaining experience and I will be saddened greatly if there is no sequel, but because they did so well with this title, I will be expecting something even better next time. I have faith that they can pull it off.