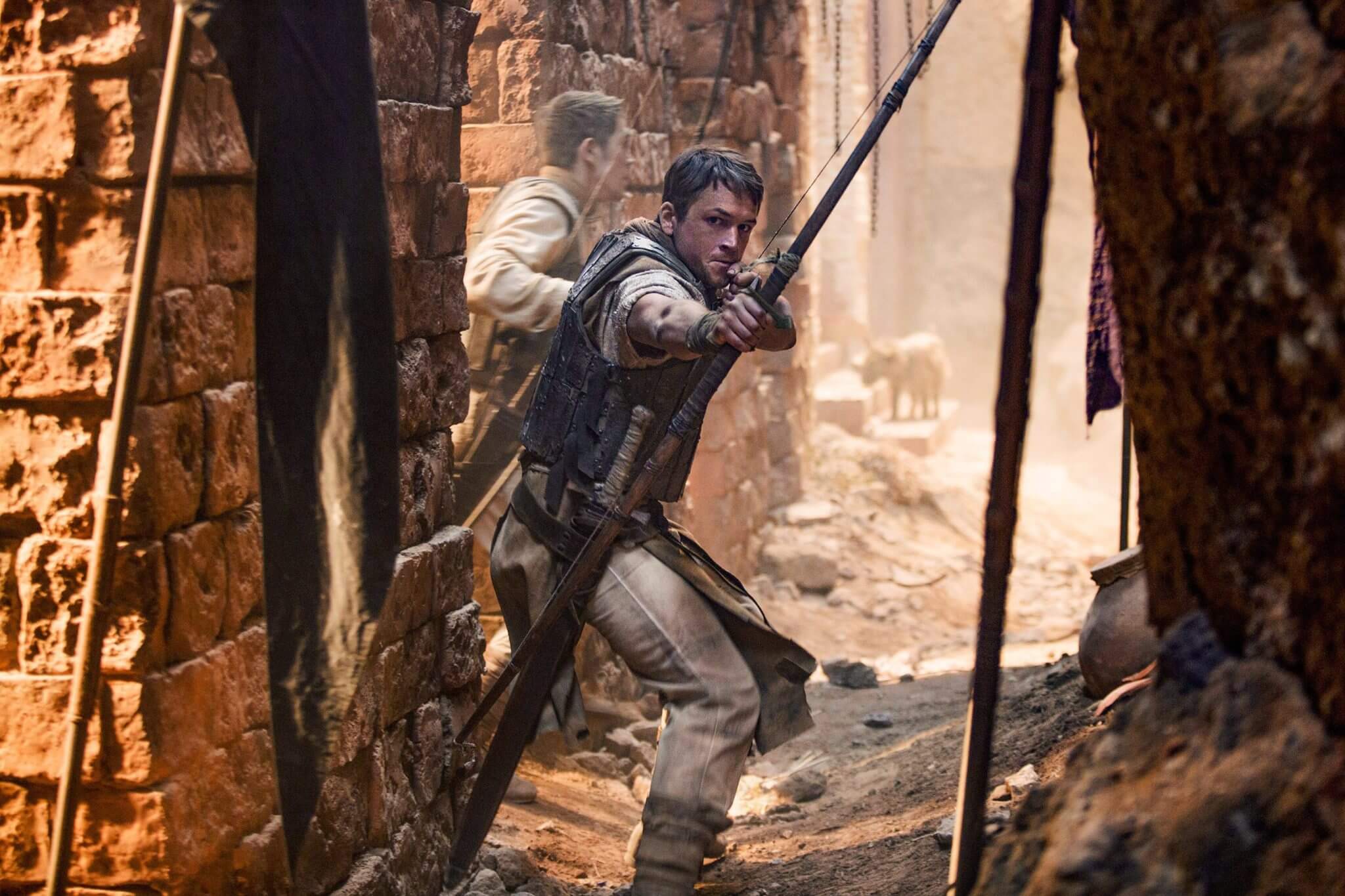 For the last time, arrows are not bullets

Thanks to being in the realm of public domain, the Robin Hood story has quite the storied history in movies. Robin Hood was the first WB film to use technicolour. It got the Disney treatment. Russell Crowe, doing as he always does, worked his magic and turned it into a boring snoozefest (Bradley has been fired for not mentioning Kevin Kostner – Ed.). There’s a lot of wiggle room is what I’m saying; take a tried and true story and outfit it with a sleek coat of paint.

This year’s Robin Hood does not do that. Astoundingly, this movie does almost nothing new and definitely nothing interesting or unique. This movie fails spectacularly on almost every level. In fact, if this movie had a way to screw up the pretty face of Taron Egerton, there would be literally nothing redeeming about it. This slog was so boring to sit through I felt my inner apathetic teenager rise from the grave to give it a long groan.

To the aliens posing as humans who have not yet learned our ways, the tale of Robin Hood is simple: he steals from the rich and gives to the poor. The evil, greedy Sheriff of Nottingham (Ben Mendelsohn) is always trying to stop our fare Robin Hood, but his just cause galvanizes the peasants to revolt against the corrupt in power.

This version tries, tries, to spice things up by integrating the Crusades more fully into the story. We first witness Robin of Loxley (Egerton) fighting in Arabia, looking like a cheap, medieval recreation of Black Hawk Down. Here the movie takes the only slightly interesting curve in its entire runtime by introducing us to Little John (Jamie Foxx). Instead of being Robin’s well-meaning sidekick, John is a master bowman and trains Egerton to become Hood. Yes, Hood is the edgy name they decided upon.

Besides that little twist, literally nothing is different. If you’ve seen any Robin Hood before, the movie follows it beat for beat minus a throwaway plot about a corrupt cardinal. Everything in this movie is telegraphed miles away, including the dialogue. Most of the time even bad movies try to have subtext and symbolism if you read between the lines, but that’s too complicated for Robin Hood. Every conversation is so on the nose, so dull and vapid, I cannot remember a single line.

Now to be fair, this is an action movie, so the script can be forgiven for its total lack of substance. Spectacularly, Robin Hood has the courage to screw up the fights too. Right out of a knockoff Bourne movie, the camera seems more preoccupied with shaking around than filming anything. It actually is a shame because the bow combat teased in the trailers could have been interesting, like a Hawkeye movie if everyone didn’t inexplicably hate him. I beg you: take any and all hate you have towards Hawkeye and channel it into this movie.

Nothing is interesting. They take the immense talent of Jamie Foxx (Django, for goodness sake!), and have him sit on the sidelines. Framed to be such a cool badass in the first action scene, he does next to nothing else for the rest of the movie besides train Robin and hurl vague morals at the screen. Egerton as Robin fares even worse because he has so much more dialogue. More awful, awful dialogue. My man crush on Egerton has already been documented on this site, but even my most generous critique of his performance could be summed up as a 30-minute fart noise.

There’s really, truly nothing in this movie. There’s a very half-hearted love triangle with Egerton’s love interest Marian having married while Robin was in Arabia, but the third guy quickly becomes a thing the movie can point at to show how Robin is right. Nothing has depth. The Sheriff of Nottingham has this bizarre rant against Arabia to rally up support for a tax bill that is pulled right from our modern day xenophobic handbook, and it only exists to prove his badness to the audience.

Badness is a good way to describe what Robin Hood excels at. A clunky sounding word, this movie doesn’t deserve more complex adjectives to describe its failure on almost every level. I say almost because Egerton is still gorgeous and there were some neat landscape shots, but make no mistake, this is a very, very, very bad movie. At this point I’m looking forward to the next movie retelling the tale of Robin Hood just to see if it can somehow be worse than this one.