The original Risen was a curious little beast. In a genre so used to empowering the player, letting one live out heroic fantasies in a world full of treasure, choice, and magnificent deeds, Risen was quite prepared to strip you of your dignity, kick you around a bit, and spit you out a more humble, more shameful, individual.

In many ways, what Risen attempted was admirable. It wanted to make you earn your power fantasy. However, its awkward navigation system, reliance on ambushes, and general imbalance put me off fairly quickly.

In Risen 2: Dark Waters, the ambition remains. So do the problems. This time, however, I couldn’t stop playing. Perhaps it was a grudge, a desire to kick the game’s arse for a sense of pointless payback. Perhaps it was simply that, despite its problems, Risen 2 still manages to be perversely enjoyable. Most likely, it’s both. 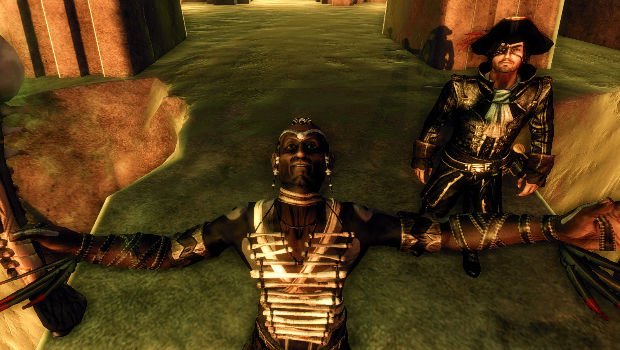 Risen 2 takes place several years after the first game, with the world in an unsurprising amount of peril. Our nameless hero has returned, now an alcoholic shell of his former self and serving in the Inquisition. The “old world” has been swallowed by monsters from the depths of the ocean, and our hero is charged with the task of scouring the new one — a region of tropical jungles, ancient native tribes, and murderous pirates — for a way to defeat the ancient evil attacking from the sea. Cue adventure on the high seas, the wearing of fancy tricorn hats, and more rum than a human could medically drink.

At its heart, Risen 2 is a traditional action role-playing game, with a focus on exploration and accepting humdrum quests from rude characters who may or may not prove helpful to the overall mission. Like with the last game, navigating the world is a bit more of a hassle than one is used to in our age of modern convenience, though some may appreciate a lack of hand-holding. The in-game compass is useful for very little, and players need to keep checking the map screen to find out where a quest objective is. As each of the game’s many islands are explored, fast travel points unlock, but some of them are very randomly placed, with areas that would seem like obvious choices remaining completely cut off. Fortunately, the islands aren’t too huge, and once players get their own ship, they can travel the world at a fairly decent pace.

Rather than use a traditional leveling system, players earn Glory points for enemies killed, locations found, and quests completed. Glory can be invested into several attributes that govern statistics and unlockable skills. For instance, spending Glory to level up one’s toughness allows the player to absorb more damage from weaponry, and allow players to learn skills such as Bladeproof (reduced damage from melee weapons) and Intimidate (allows the player to use threatening dialog choices with NPCs). The more an attribute levels, the more Glory it requires, while the skills pertaining to each attribute are purchased from teachers for an obscene amount of gold.

It’s a fun system with a very enjoyable set of skills (characters with high cunning can train monkeys to steal for them), though the high costs — both in terms of Glory and gold — make powering up feel like a chore at times. Gold isn’t falling out of people’s pockets, especially with players having to also spent money on bribery and equipment, so it can be a very long time before the player feels suitably powered up.

This is an issue due to the fact that Risen 2 is ridiculously cheap at times. There are many monsters that can hit harder and swifter than you can, some of which can even outrun you if you attempt to escape. Certain monsters possess unblockable attacks that hit faster than the player can move, and they aren’t shy about repeating those attacks and locking our hero into repeated “pain” animations. If you fight multiple opponents at once, you’ll be trapped in a situation where one will be attacking you at melee range, while the others stand at a safe distance and throw unlimited spears or fire vicious muskets at you. All this is thrown at you before the hero is even halfway capable of defending himself against most of the enemies he’ll be facing. 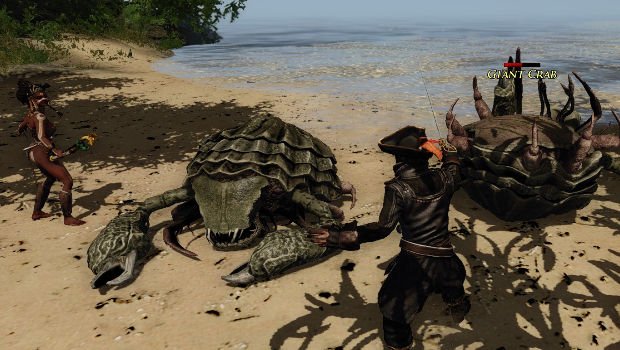 At times, things are so imbalanced as to be totally demoralizing. Risen 2 cruelly sets the player up to fail. Fancy challenging the first NPC you meet to a training duel? Expect him to kick your ass, using moves you won’t be able to utilize yourself for hours. Expect him to whittle your health down to a sliver, which you’ll have to heal yourself. Expect that small mercy to be lacking from the less empathetic creatures waiting outside. Oh, and expect to save before and after every single fight, and sometimes in between.

This initial shock hides what is, when you dig deep enough into it, a strangely rewarding adventure. Though you will never feel truly powerful in Risen 2‘s world, enough time and in-game funding will put you on par with the game’s heftier opposition, and by the time you’ve strengthened your hero up enough to finally take down more than one pirate unaided, you’ll feel immensely proud of yourself. It’s a very strange game that punishes you so hard you’ll start to feel brilliant simply for becoming slightly competent. I sense many won’t find the effort worth it, but those that stick with the circus of malice may be surprised at how much satisfaction there is to be had from finally getting a taste of the upper hand. 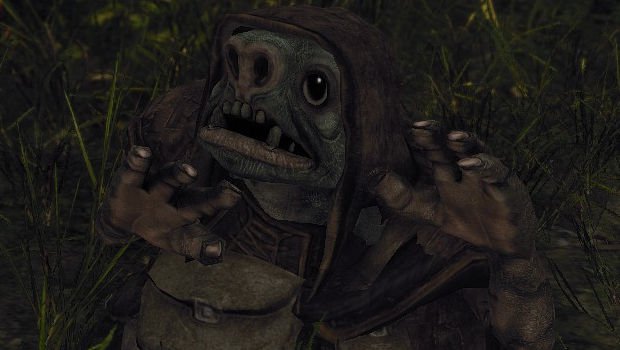 The sadism is further alleviated once players become captain of their own ship and gather together a crew. Players can take one crew member as a companion out to the islands, some of whom exist simply to have your back in a fight, while others possess skills to provide special benefits in the field. Most players will likely go with Chani, whose skill as a witch allows her to heal the hero when his health drops too low — an invaluable and lifesaving power that trumps pretty much everything else on the menu.

The combat system attempts to be deeper than most in the genre, though its unintuitive implementation makes it feel a little unwieldy at times. Melee combat relies on timing and counter-attacking in order to successfully fight, though the abilities with which to do all this must be bought piecemeal from teachers. When players finally have enough skills gathered, they can block and parry attacks by attacking at the same time as the opponent, then pressing the space bar at just the right moment to counter with a riposte. Firearms can also be used by pressing “E” at any time, though players have to make sure to keep blocking or risk having the hero turn around and shoot thin air for some reason. Also, one must bear in mind that this entire combat system is thrown out of the window when fighting monsters, who cannot be blocked and turn the whole thing into a mindless hack n’ slash game.

New to the series is voodoo magic, which more insidious players can improve through Glory like anything else. Voodoo allows not only for the brewing of mystical potions, but the crafting of dolls that can curse opponents, or even physical possession other characters. At key moments in the story, the hero will be required to possess certain characters in order to manipulate events or infiltrate areas, leading to some amusing moments. 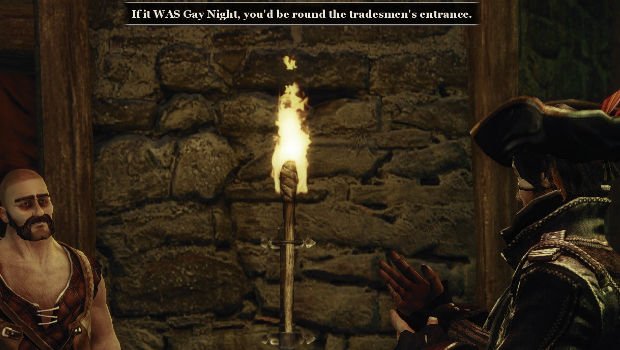 Speaking of amusing, Risen 2‘s idea of what is and isn’t an acceptable joke raises an eyebrow at times. I’m all for tasteless gags, but some of the dialog in this game may cross the boundaries of acceptably risqué patter and fall firmly into offensive territory. One early quest involves trying to force your companion into a kitchen job for no other reason than she’s “a woman.” Later on, characters openly refer to black natives as “spearchuckers” (a racist term in Europe) while several homophobic jokes crop up. One can argue that these characters are steeped in a world of piracy and such ignorance is expected, of course, though the fact that the comments are regularly presented in a matter-of-fact manner, with absolutely no sense of criticism or complaint, and sometimes come from the hero’s own mouth, remains faintly alarming. It wasn’t enough to offend me personally, but I certainly was surprised and I’d recommend those with rawer nerves keep their shields up.

Outside of the occasional wince-worthy gag, Piranha Bytes manages to raise a few smiles with some genuinely amusing — if unapologetically stupid — comedy. Eccentric characters such as a misguided gnome who can’t stop swearing and a pirate who died, lost half his soul in the underworld, and became a crazy tribal demagogue, manage to put in some memorably entertaining performances. There’s much enjoyment to be had in playing what is, at heart, an M-rated Pirates of the Caribbean. 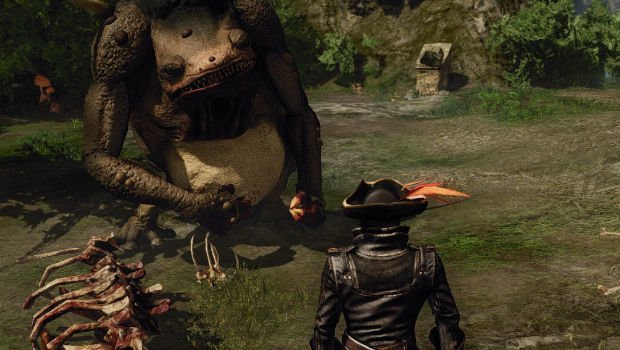 Risen 2 has an overhauled look compared to the original game, though the biggest visual benefit comes from its new tropical environments. The thick greenery and bright sunlit islands make for a visually appealing game that might not be on par with the Uncharteds or even Skyrims of the world, but nonetheless bring a splash of color and exotic flair to the proceedings. There are a few hiccups, most notably in the dodgy ally A.I. that can see players freezing in place or wandering off, but otherwise this is one of the more stable and technically sound European RPGs I’ve played. A selection of amusingly silly voice actors and some decent music help round out the presentation.

Risen 2: Dark Waters is a difficult game to review, because I want to express how much I enjoyed myself in spite of the mountains of criticism that it quite rightly deserves. It’s unnecessarily mean-spirited, it demands an immense amount of the player’s time before it hits its stride, and the whole thing’s potentially offensive to boot. All that said, when it finally opens up and lets the player have fun, Risen 2 has hours upon hours of legitimately enjoyable gameplay on offer. The frustration of getting trapped in the corner by a faster opponent never lets up, but once players get strong enough to soak it up and hit back, the feeling of relief and vindication is remarkable. All told, you’ll get over thirty hours of pirate-flavored silliness that will brutalize you, then make you feel good inside. 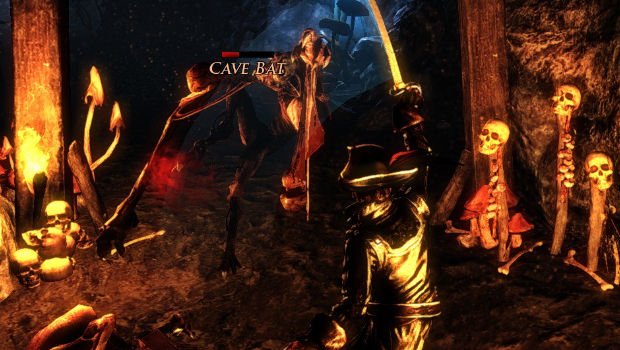 What Piranha Bytes has developed could have been a thoroughly supreme game, one that could have gone toe to toe with the heavyweights of action role-playing. Due to a number of highly questionable design decisions, however, a lot of that potential has withered away. With so much lost, it’s perhaps a testament to how talented the team secretly is that Risen 2 is still packed with fun in the face of truly inhibiting setbacks.

That deserves a modest round of applause, at the very least.