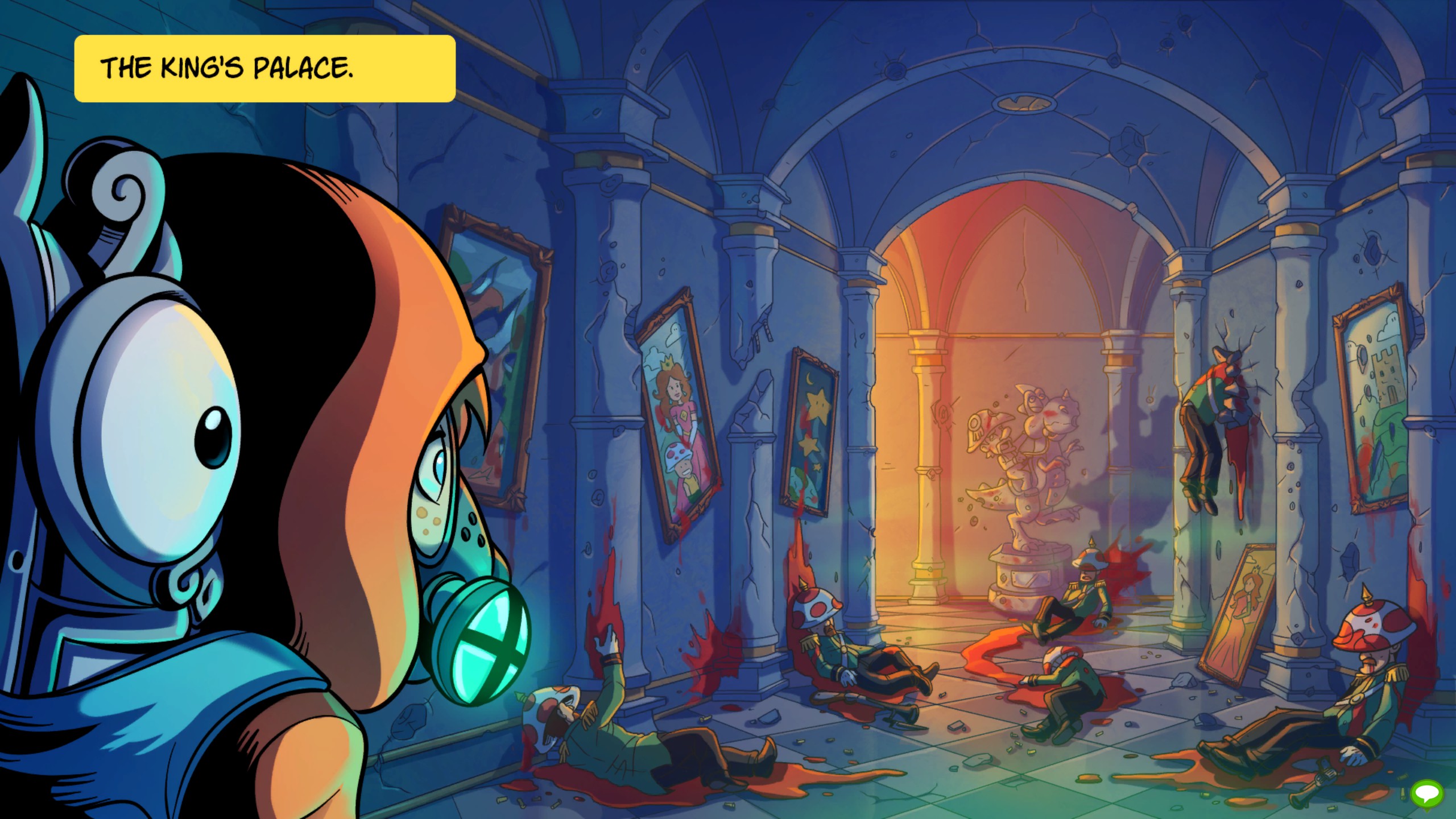 Have you ever fallen head over heals for someone extremely beautiful only to find out that what is at their very core is just not good, and may even be downright bad?

It gives me no pleasure to say that is how I feel about Rise & Shine, a side-scrolling shoot-’em-up that is video game referential humor from start to finish and so visually appealing that it’s hard to swallow the rest of the game falling short. I had such high hopes for it when I previewed it last year. 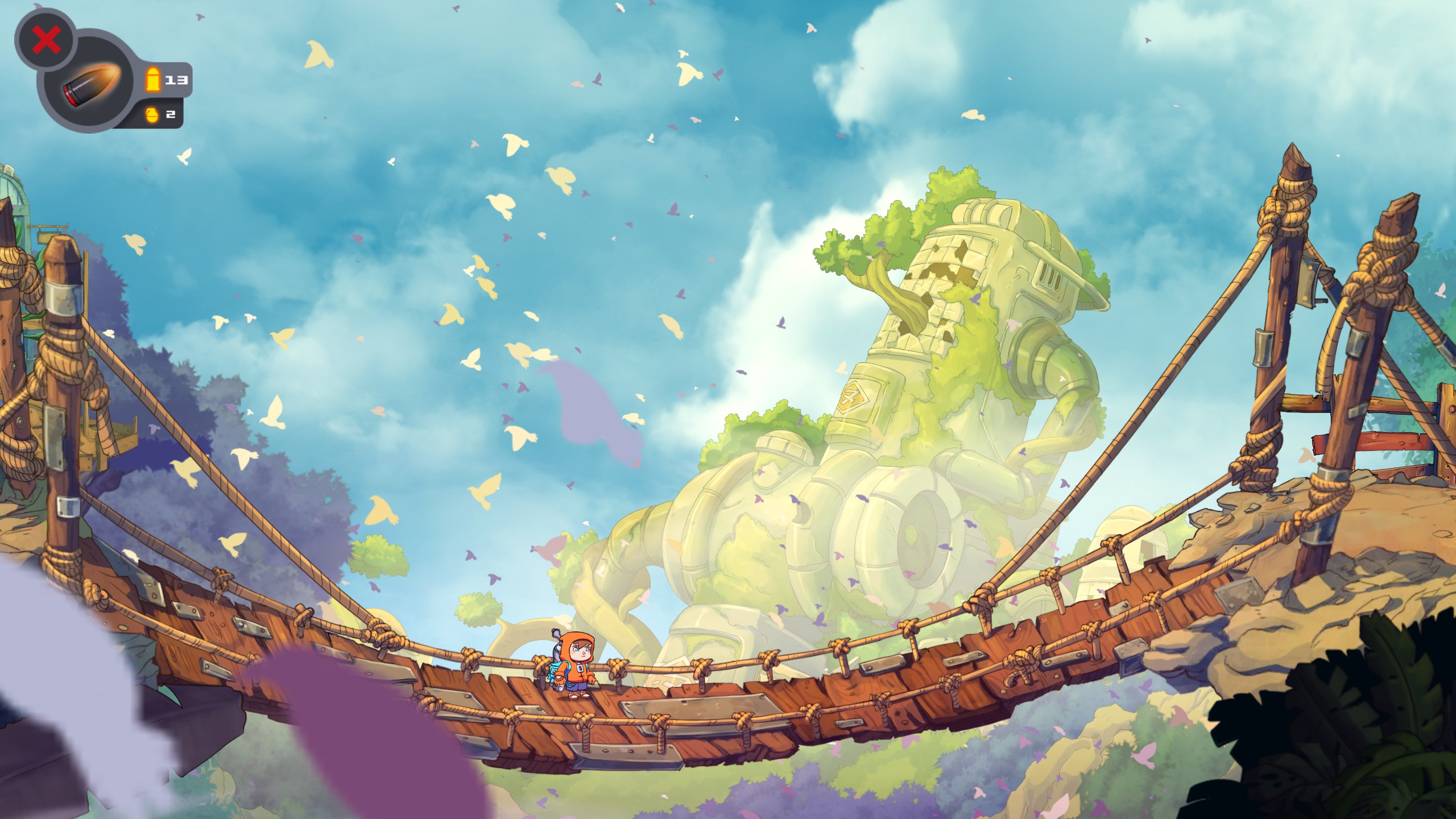 From start to finish, Rise & Shine references other popular video game series, especially The Legend of Zelda, Super Mario Bros., and Gears of War. A character named Blink gives 10-year-old Rise a talking gun called Shine at the beginning of the game before being killed by a bulky Gears-like space marine. Rise is told to seek out the king of Gamearth, which is seemingly the planet of knockoff characters.

As the game only lasts around two hours, you probably won’t be surprised to hear that the story is shallow. Halfway through, a man with a mute young girl shows up, neither of which have their motivations explained. Heck, the motivations of the bad guys aren’t even explained, though the game makes an attempt at the very end which just left me more confused than anything.

Gameplay-wise, Rise & Shine is an awkward blend of a side-scrolling shoot-’em-up like Contra mixed with a bullet hell shooter and the waist-high walls from Gears of War. On paper, this sounds like a nice mix, and sometimes, it is. But touchy twin-stick aiming poisons the proverbial well here, even if it is adjustable. Since enemies can kill you in a couple of hits, you’re forced to either dodge or shoot their bullets out of the sky while also trying to kill them. At times there are five or more enemies on-screen, all of which can shoot multiple bullets at once. This gets especially frustrating during the final level, where the difficulty dramatically spikes as you’re forced to switch on the fly between varying unlockable ammunition types to even stand a chance at survival.

Most of the time, I found it easier to just quickly spray bullets in the general direction of my intended target while gently moving the right stick in hopes of hitting the mark before I died. It usually worked, but not when overwhelmed by enemies. 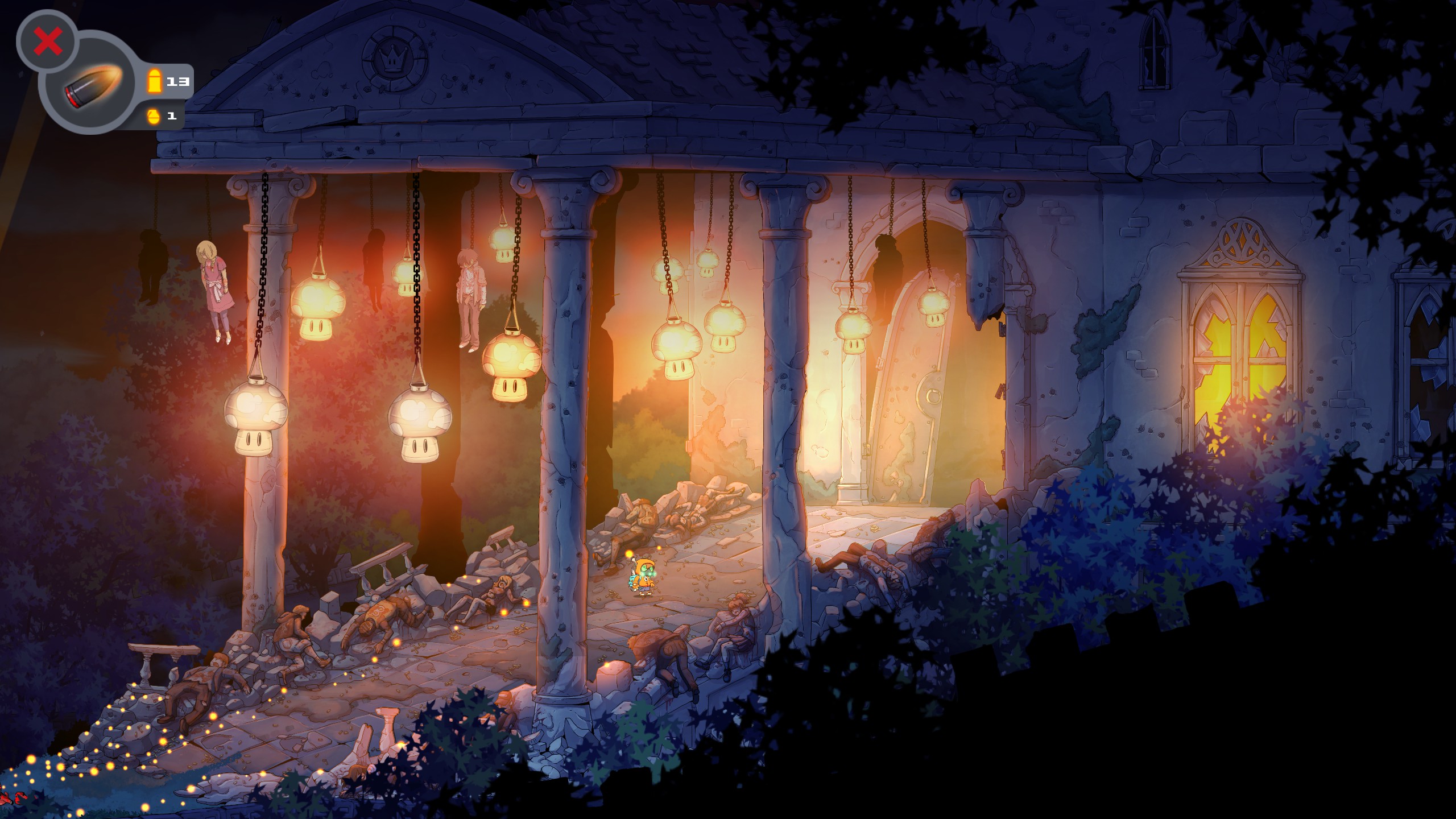 It is a shame that the gameplay and story can’t match up to the wonderful soundtrack and art style. The smooth and colorful animations are adorable and desktop-background worthy, while the soundtrack is better than it has any right to be, with memorable orchestrated tracks including vocals and piano reminiscent of Halo and Gears of War fodder. Seriously, I love this soundtrack.

To summarize in a similar vein to Rise & Shine‘s humor: This game could have been a triumph, but then it took an arrow to the knee. The graphics make you think the gameplay cake is real, but the cake is a lie. All you’ll find are Flappy Birds, a dead Princess Peach, and Marcus Fenix. But hey, at least you can kill the Duck Hunt dog, so that has to count for something. Oh, and this is the Dark Souls of video game humor. Take that for what you will.