Get to know ‘er

I sometimes forget that Raiders of the Lost Ark came out in 1981. Its breezy pulp adventure quality carries only obvious signifiers of its era (like, Nazis), and the repetition of these tropes act as enough hand waving to the point where Uncharted‘s modern day setting can be taken for granted, though mostly because the series tends to exist outside what we see as modern society (save maybe for Elena’s camcorder) and instead provide the same fantastical distance that 19th century adventure novels offered.

The 2013 Tomb Raider reboot and its immediate follow up, Rise of the Tomb Raider, doesn’t ground itself in modern society, either — there’s just a moment of Lara wearing a casual leather jacket back in England, an alternative costume I wore for the entirety of my adventure through Rise‘s wilds — but neither does it call back to breezy, “fun” pulp history. Rather, it continues the self-serious, “gritty” origin story trajectory, hence the inelegant title. 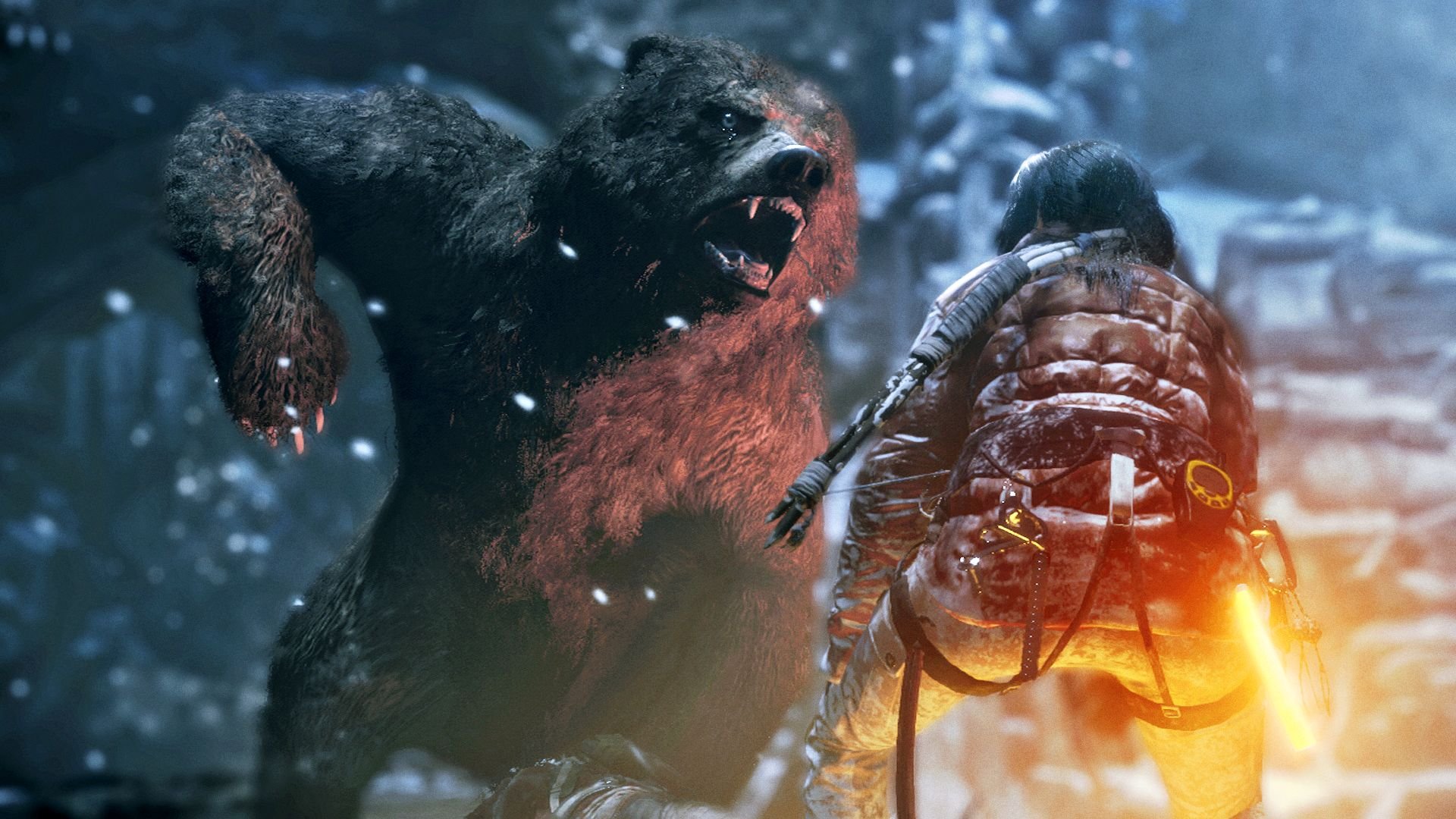 Having previously glimpsed the supernatural, Rise of the Tomb Raider‘s Lara is open to the wild theories of ancient immortality that consumed her father. A brief trip into Syria introduces the new enemy, a highly-funded, obviously evil group called Trinity led by Konstantin, a religious zealot and less comic book version of Uncharted 2‘s Lazarević. Lara then tries to beat the stonejaw-led shadowy entity to the Siberian wilderness, where most of the game takes place.

The first thing I noticed in Syria was its rich orange sands, a strong contrast to the last Tomb Raider‘s much more muted palette. Then it was Lara’s powerful blue glow stick as she began navigating tombs, providing the same orange/cyan look you find in most Hollywood movie color grading. Naturally, when Lara goes to off to Russia and the blue-white snow and ice, she’s suddenly packing orange glow sticks.

It’s not a bad thing, though. Rise of the Tomb Raider is not shy about using unrealistic lighting to set a mood and it works, like when the blizzarding night sky is illuminated with an eerie deep red light thanks to Trinity flares. It’s one of the best-looking games this year, but it also goes beyond stylish at times and helps set the mood. Coupled with a camera that occasionally, but never annoyingly, takes control from you to frame the next impressive mountain establishment or some such thing you have to climb.

The combination of framing, use of color, and lighting are welcomed Hollywood cribbing. Most of the additions since the last entry are welcomed, too. The stealth options make more sense in a supposedly serious game hellbent on showing the brutality Lara deals with (gruesome death close-ups are still plentiful), rather than the more discordant Lara-as-Terminator that doesn’t jive with the story being told. That said, you can still mostly do that. Even when the game hinted I could stealth through an environment, unless I saw an obvious path, it was easy to loose bows from afar into enemies’ heads.

Rise also touted the tombs pre-release, which are peppered throughout the world. They’re probably the highlight. I think Tomb Raider is a better platformer than shooter and working out these beautiful, often complex environmental puzzles had me yearning for a more ICO-like distribution of puzzle/platforming versus murder. The stealth, too, kind of hints at a game that could’ve made death and killing meaningful in line with the narrative, but instead we’re left with a refinement of the Uncharted series sans one-liners.

Except for the bloat, which kind of flies in the face of the snappy movie cues and Uncharted‘s beats. Rise borrows slightly from the Legend of Zelda formula in that there are distinct areas (“hubs”) organically woven together, but requiring back-tracking with new gear and items. It’s a very game-y conceit. In the cinematics I asked why Lara hadn’t a camera (or even a cell phone) to prove (evidence!) the things her father died over, but she didn’t even slip an iPhone out of her pocket. At the same, coming across a rope and being told I can’t cut it until I find a knife, well, why the hell does Lara not have a knife? 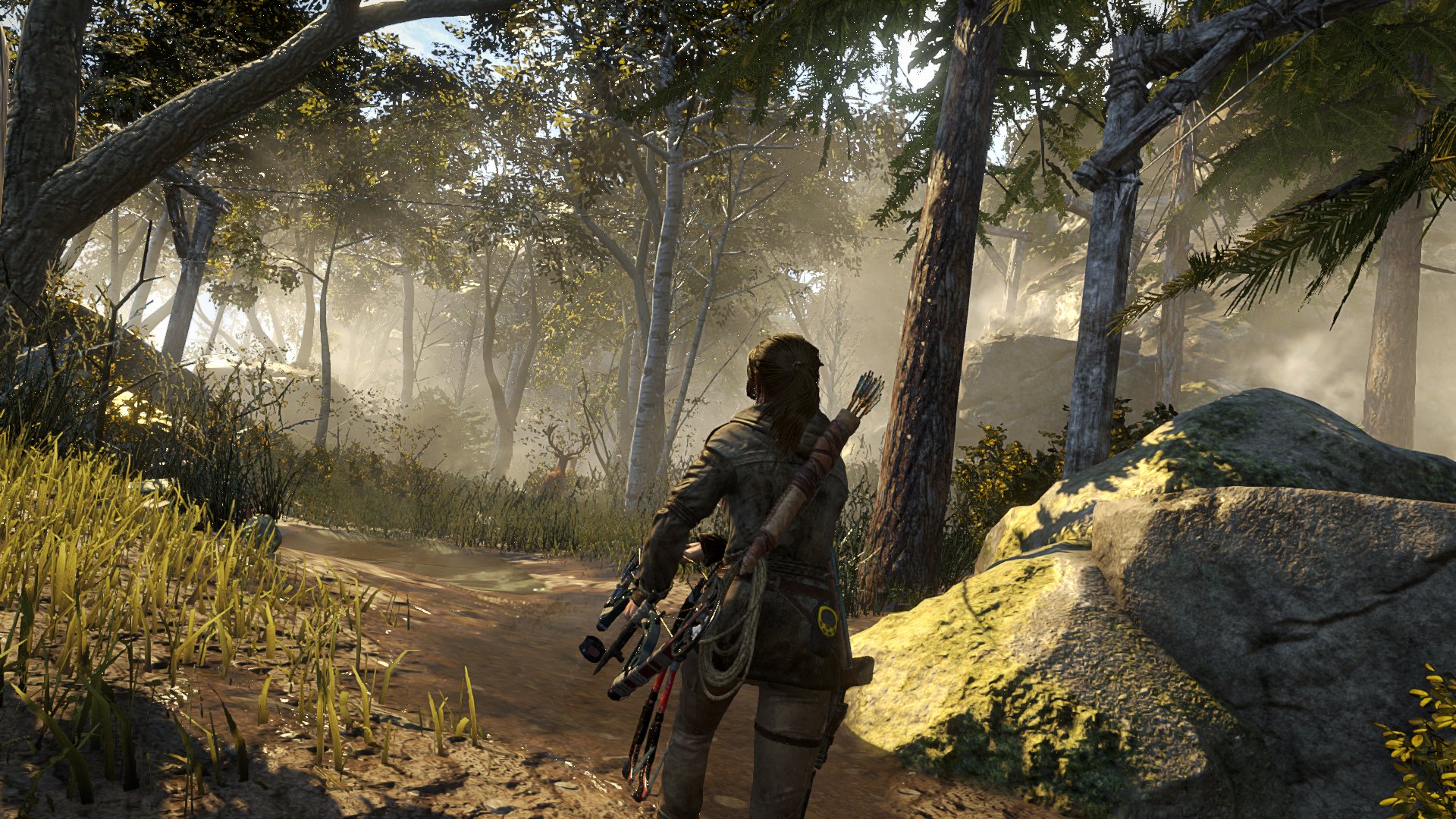 People who like busywork will probably appreciate the hub areas replete with open-world style challenges (burn all 10 communist propaganda posters, cut down all the snared rabbits, etc.), but it kind of grated on me. I didn’t open the map until a few hours in and I immediately wanted to slam it shut after seeing the Assassin’s Creed-style unreadable mess of icons. And while these tasks often yield rewards, including XP, it just feels so unnecessary. Which is kind of true, given that I got through the game fine without doing anything but the most convenient extras, and didn’t find a +2 damage Polished Barrel to affect my capacity to kill folks all that much.

So why’s any of it there at all? Rise has a very pressing, dire narrative, and is a joy when you’re moving around and exploring the gorgeous environments. Constant IU flashes (10XP!!!) only serve as an intrusion and gum up the works. Having to pause the game and look at a static menu screen to hear picked-up audio logs (already a bit of a lazy, all too convenient way to shove more story into your game) kills momentum, tension, excitement. You just have to stare at a render of a tape recorder if you want to know why the big bad bleeds from his hands.

The story handles the necessary, telegraphed third act turn to the supernatural well, but generally suffers from a glossing over. The Burberry-clade arm of Trinity trying to beat Lara to the punch are well-acted, but pretty one-dimensional (even with everything wrapped up in explanatory audio logs). An entire society isolated in the Siberian wilderness speaks perfect English. It’s perfunctory Hollywood boilerplate, down to the set up for the sequel, but competently done. 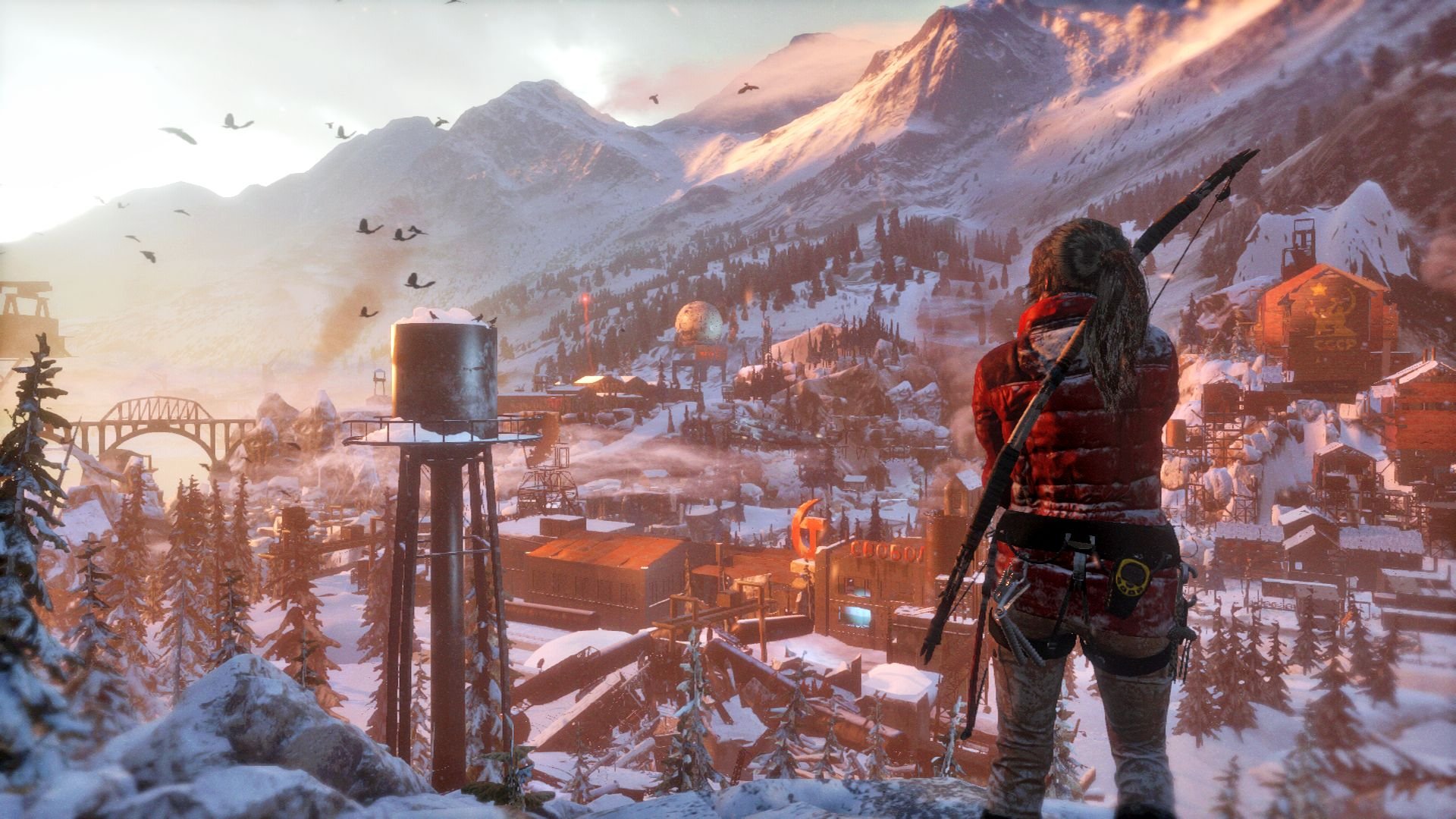 Worth noting: I ran into an odd problem late in the game where enemies would disappear. First right before me when I was swinging an ice axe at them as if Lara did so with enough force to banish them from this plane of existence, but then sometimes they’d vanish completely on their own. Once this locked me in a room because whatever needed to trigger to open the door couldn’t and I had to restart (not losing much progress), while it also happened during the game’s final boss fight, which was anticlimactic. The loss of XP from these tactical Houdinis might impact games on harder difficulty settings where the leveling and crafting system could prove more necessary, though on normal I got to a point where I didn’t even care to spend my skill points.

That excess is a problem shared with the last Tomb Raider, which bills itself (and thematically tries to be) a survivalist game, but simply isn’t. It’s a bit goofy ruining the beautiful colors of the world by constantly jamming down the “survival instincts” button to light up objects of interest and clambering around to strip trees of their boughs. Eventually I stopped going out of my way to pick up trash, yet I still always had ammo and arrows. Crafting, skill trees, open-world-style quests: it just feels like bloat. Busy work. And it isn’t consistent with the story.

Moving around, on the other hand, is sublime. It is odd, though. There’s an animation for when Lara is pushed up against a short, maybe knee-high lip; pressing the jump button has her labor up it a bit. Yet if you push the jump button otherwise, she will leap clean four feet into the air like a cat. 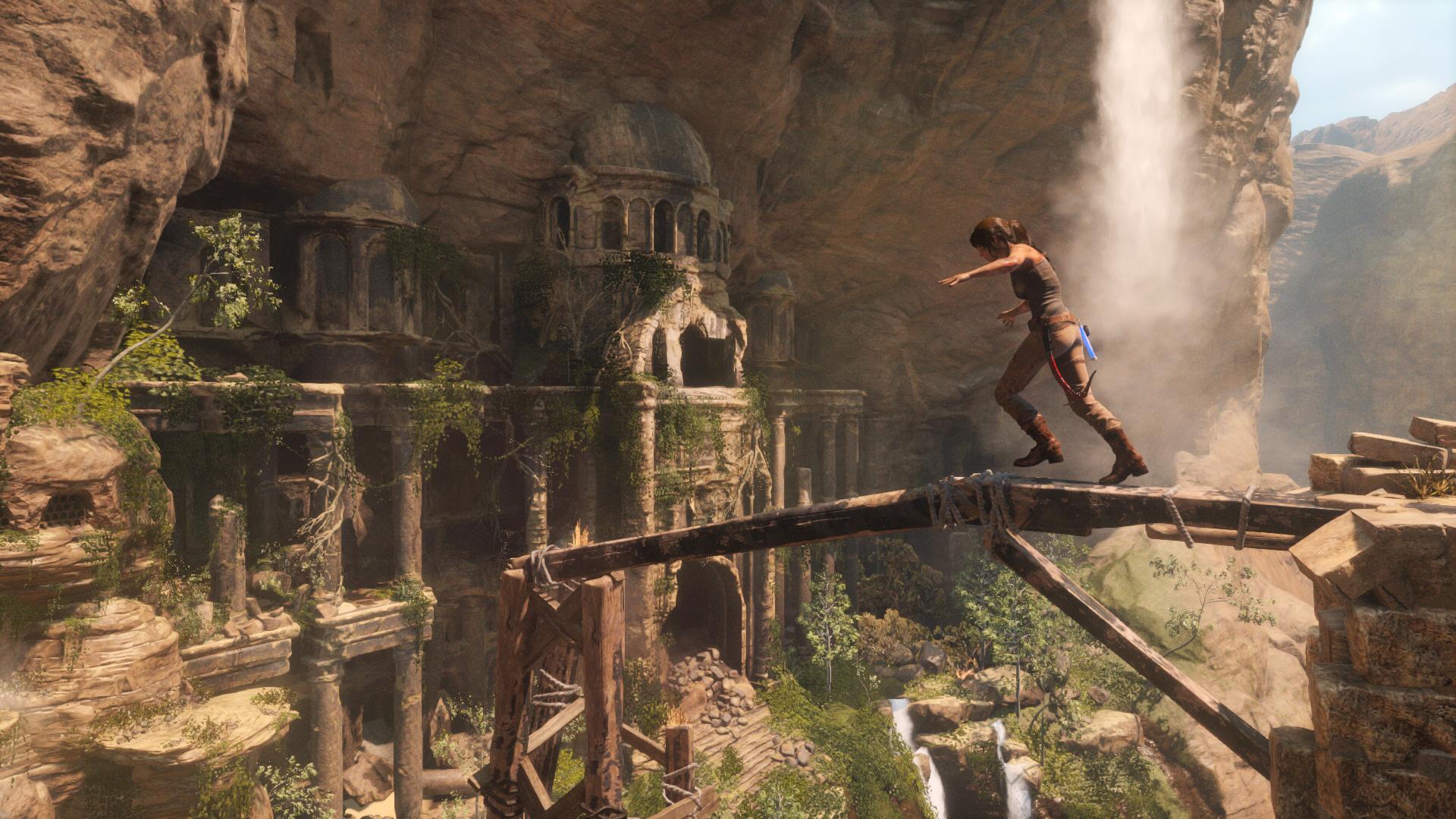 That amusing inconsistency aside, Lara’s movement animations are all so fluid and impressive. If she barely makes a jump, she can slip and fall if you don’t press a button. But rather than her needing to get a grip be a recurring quick-time event, it organically happens every time you barely snag a ledge. This means you can tell if that prompt is about to come up and can preemptively push it, and Lara will secure her grip and you can continue about fluidly climbing around. It’s a good bit of adding interaction to the platforming without having to pre-plan bits of structure that will start to crumble when you grab them.

Rise of the Tomb Raider is better than its predecessor, but only because of its additions; it doesn’t fix any of the things that were wrong with Tomb Raider (2013). The story is smoothed down, much of it hidden away in dull audio logs. It’s not about “survival” as billed, given the ease of mowing down dozens of folks and plenty of resources. But finding tombs wherein to clamber about ancient Rube Goldberg machines, coupled with the gorgeous visual flair and diverse environments, make Rise‘s wilderness one worth exploring and elevate Tomb Raider‘s otherwise perfunctory take on the third-person action platformer. I still get a strong sinking feeling in my stomach when I’ve misjudged a jump and watch Lara careening towards a splat.