I only started watching Rick & Morty halfway into the second season several months back, but after catching the first few episodes, I immediately burned through all of it. There’s something about the show’s sick sense of humor that really appeals to me, not to mention the great duo at its helm.

The show’s first real game, Pocket Mortys, isn’t a must-play for everyone out there, but if you appreciate the show it’s worth a shot. 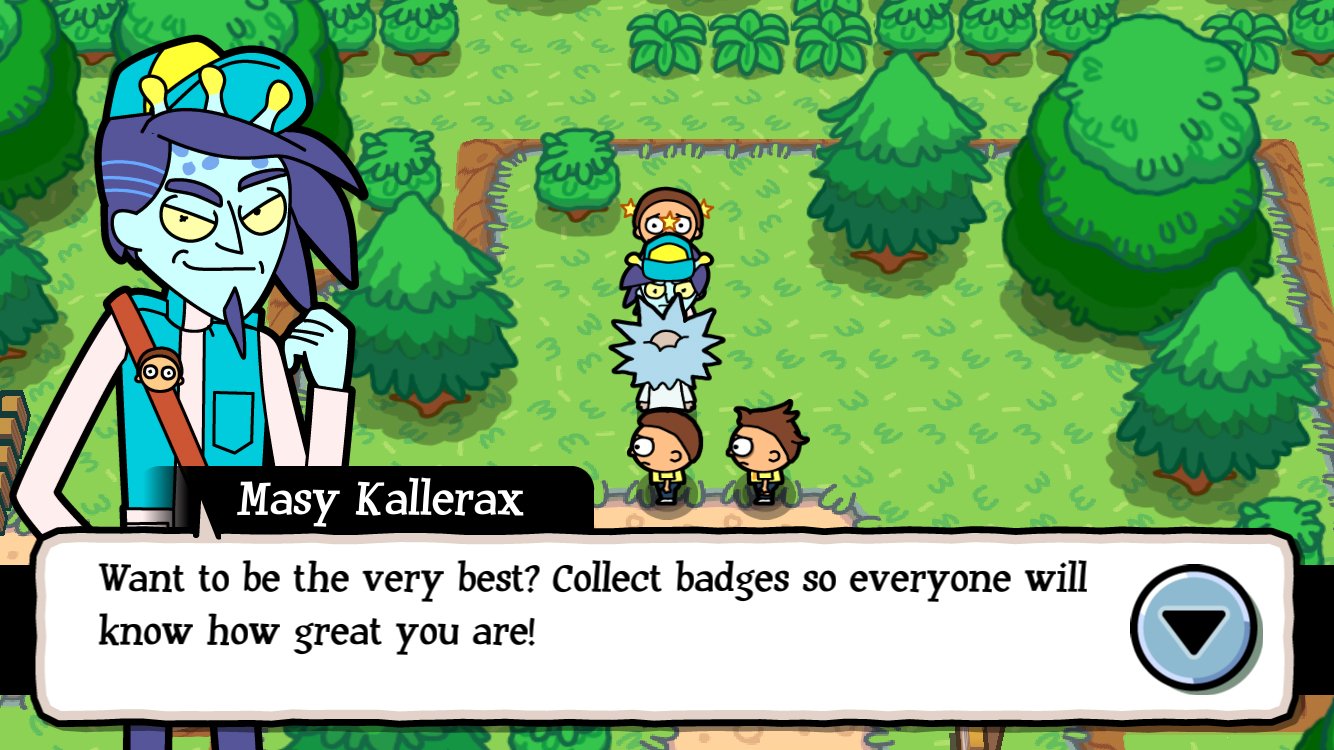 There’s no beating around the bush here, this is a complete and utter Pokémon clone. No, I don’t mean that it’s a cute parody with subtle references and mechanical influences — I mean it’s literally a Pokémon game with Rick & Morty‘s world injected in. Presentation-wise it gets the job done, as each type of Morty (read: Pokémon) is fairly unique, and although there aren’t full voiceovers and cutscenes, there are some original quips by way of Justin Roiland, who voices both Rick and Morty.

As a clone, it features an old school turn-based RPG style battle system (with options for attack, item, switch, and run). Attacks even have AP, and you can capture wild Mortys with a Pokéball Manipulation Chip — I mean, they aren’t even necessarily trying to be funny about it. Pocket does feature “types,” but instead of elemental themes it follows the bite-sized rock, paper, scissors style, which predictably counter each other. Hell there’s even a bank and Pokémon Morty [healing] Center (though in the case of Pocket, the former also has an SMT-like character combination feature).

You know what though? It all actually works, even on the mobile platform. I wish the d-pad were a bit more adaptive (it’s basically tethered to one part of the screen), but it’s really easy to select each battle and menu option with just a quick tap that I don’t really pine for a proper tactile control method. The hub is well designed and easy to get around, with a square-like layout and plenty of helpful shops. Peppered in alongside of the core campaign is a series of sidequests as well (basically item fetch quests), coupled with a rather deep crafting system. 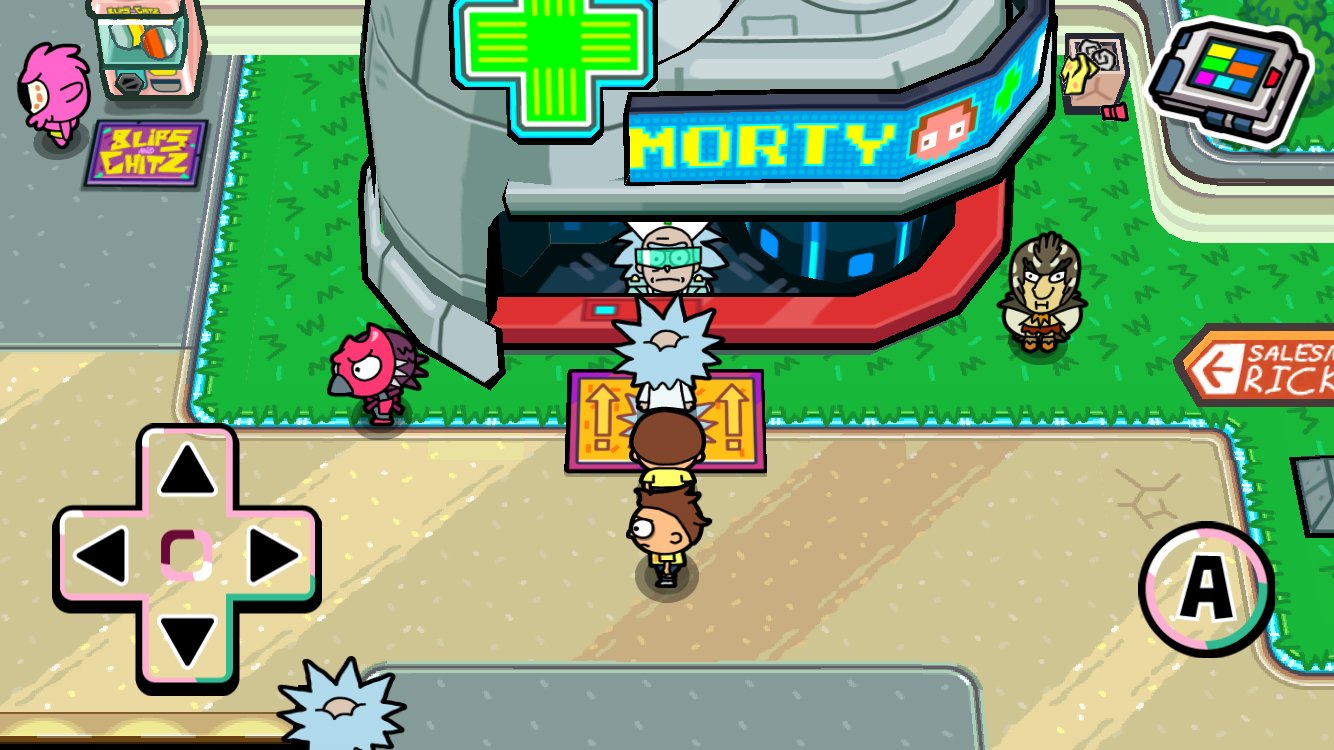 In terms of the flow, the gist is that our duo is stuck in a hub world in an alternate dimension, with their portal gun confiscated. To earn it back Rick has to prove himself to a council of Ricks — all of whom have their own Mortys to do battle with. Of course there’s a time-gating catch, as the player will need to earn badges (ha) to unlock each subsequent Rick fight. Think of it like the Elite Four, except in this case, there are six Ricks.

Early on, jumping into each zone was a rush, and I couldn’t wait to see what types of Mortys and Ricks awaited me. Mini Mortys, Stray-Cat Mortys, Evil Rabbit Mortys — all of them come complete with their own set of abilities and such, and capturing them to find a well-rounded team was a ton of fun. Except, said loop eventually grows stale after you beat the third Rick council member or so, as Pocket basically says “get more badges, bitch,” and forces you to grind it out to see the ending.

Because with Pocket Mortys, every zone (which features one possible badge with a Rick fight at the end) is a randomized dungeon of sorts. At first it’s exhilarating, diving into the unknown and finding more Mortys along the way, but the tedium sets in after you’ve seen all the biomes and settings available. While I initially played three hours straight (which is an accomplishment for a free mobile game), once the fatigue set in I resorted in taking frequent breaks. One could argue that this is totally cool for a mobile experience, but it could have at least broken up some of the monotony. Having said all that, the game manages to be fun throughout in spite of this roadblock that will inevitably turn some people off. 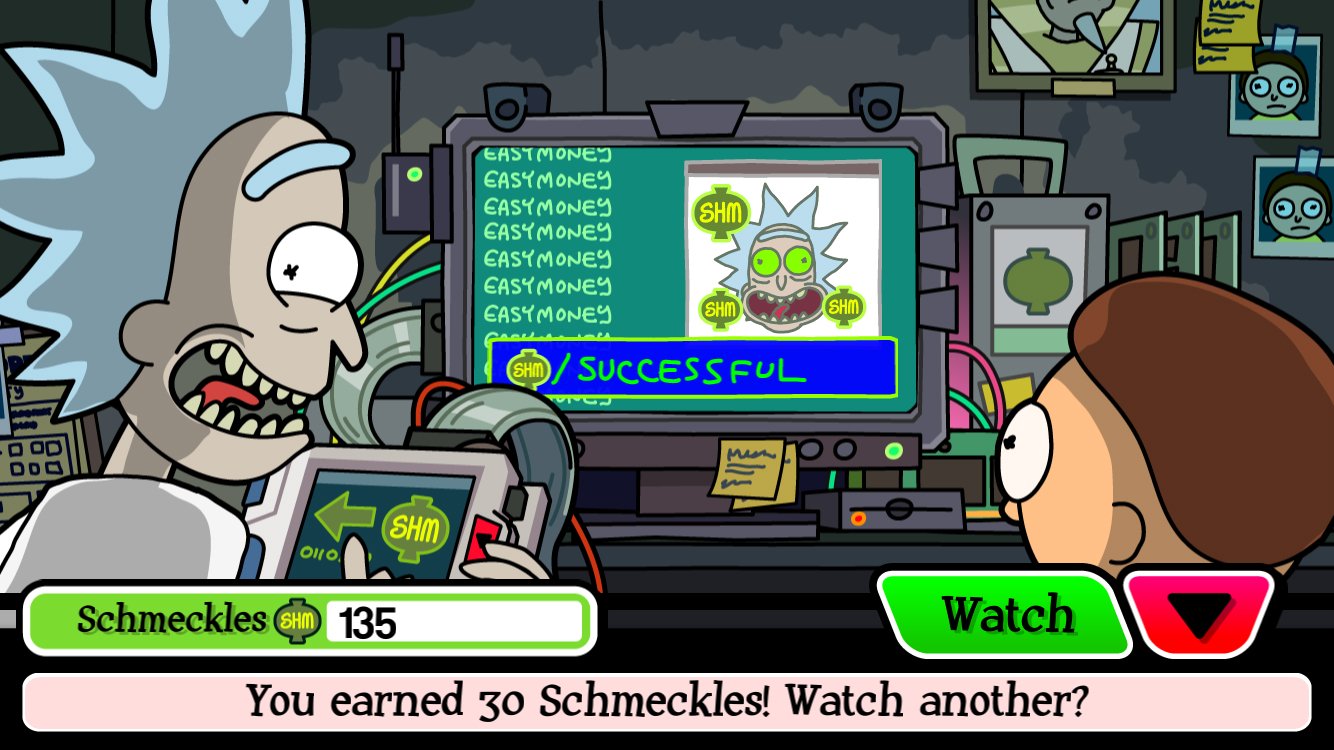 Okay, so it’s free, is there a catch? Sort of. The microtransaction scheme is twofold. First, you can watch videos (ads) for extra currency, which is used to buy items from the in-game store. It’s a strategy that a lot of games are using these days, and for the most part, it’s fairly inoffensive. Where Pocket kind of gets me irked is the second scheme, which are good old fashioned microtransactions that grant you tickets to exchange for better items and even new Mortys. Sure you can still earn tickets occasionally (mostly by beating an “Elite” member), but the fact that both of these strategies co-exist does get in the way somewhat.

Now, I’m not the type of person who automatically burns things at the stake for microtransactions merely on principle, especially if they ultimately are optional, and that’s how I felt with Pocket Mortys. Not once did I feel the need to spend money, and although I was tempted to watch an ad or two to earn enough to buy an extra potion for a boss fight in one zone, the realization that I could just die, go back to the hub without penalty, and move on to another random zone didn’t sting in the slightest.

Pocket Mortys, like many episodes of the show, is a true roller coaster. It has a lot of highs, a ton of lows, and that may not appeal to everyone. For me though, I feel like I got my money’s worth, and it made the wait for the next season of the show (which still has no set premiere window) that much easier.

[This review is based on a retail build of the free game provided by the publisher ahead of launch.]