Revelations 2012 first came to my attention when a random Twitter pal recommended it, presumably under the impression that I would find something to love in the same way I regularly watch Alien Resurrection and enjoy every shameful second. The trouble is, Alien Resurrection is so bad it’s good, and even offers a number of genuinely entertaining moments.

Mostly, however, I am angry at myself. Because I am stupid enough to volunteer to review it. 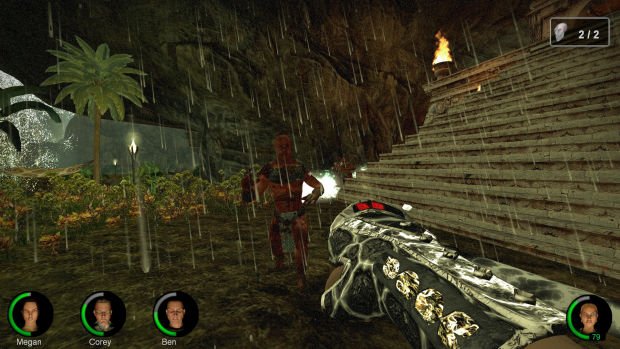 Usually, I am against comparing games to movies, as I feel the two mediums deserve enough respect to stand apart and be defined by what they are within their art form. In the case of Revelations, however, I feel it pertinent to mention the “mockbuster” genre of films. A mockbuster is a type of film designed to cash in on a popular movie by reproducing it as cheaply and quickly as possible — often releasing ahead of the authentic experience (a film designed to resemble Pixar’s Brave is already on Netflix).

These movies are not parodies, existing instead to trick the unwary with names and art just similar enough to the real McCoy to confuse — films such as The Da Vinci Treasure, Snakes on a Train, or Almighty Thor. These films can also be squirted out to exploit a certain social or cultural interest, with a variety of movies currently capitalizing on the “2012 = end of the world” phenomenon. This is where Revelations 2012 comes in.

Just like these movies, Revelations is cheaply produced, poorly written, and exists solely to make money. Like these movies, “2012” has been shoveled into the name, invoking the Mayan prophecy that has so fascinated those desperate to believe they’re part of the last generation on Earth. Also, like these films, anybody with a gullible streak could easily be tricked into thinking they’re buying something genuine, provided they are incredibly impulsive. 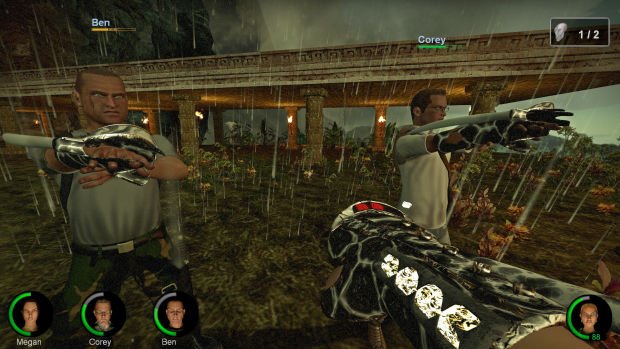 2012 is indeed based upon the prophecy that the world will end, except the general implication seems to be that the Mayans are still around, glad about it, and are actively trying to help it happen. They may not be Mayans though, and could very well be some other tribal race of offensively stereotypical witch doctors and spear-throwers. I’ll admit that the hick providing the opening exposition was too boring to listen to. In any case, people in the jungle are doing bad things, so it’s up to your gang of characters to stop them — and nobody’s going to argue with a quartet with faces that constantly look as if they’re in the middle of taking an excessively scratchy poo.

At its core, the game takes its cues from Left 4 Dead. Actually, that deserves rephrasing — it IS Left 4 Dead, except bad. The core game has clearly been ripped wholesale from Valve, with the graphics replaced and the weapons reduced to a single magical wristband with different firing modes. It even reuses fonts, imagery, and the entire end-of-level score tallies from Valve’s game, only very slightly modified in a thinly-veiled attempt to look original.

A four-player, cooperative, first-person shooter, Revelations pits a team against hordes and hordes of tribal opponents who serve as the stand-in for Valve’s zombies. As with Left 4 Dead, there are common enemies and a collection of “special” foes with unique attributes and thicker skins. The idea of being incapacitated has been removed, presumably because it was too much effort to implement, so the “special” enemies mostly fire projectiles or summon creatures, remaining otherwise hard to distinguish from the crowds. You “eat” hearts to regain life, and players who lose all their health will need to be revived by an active character. 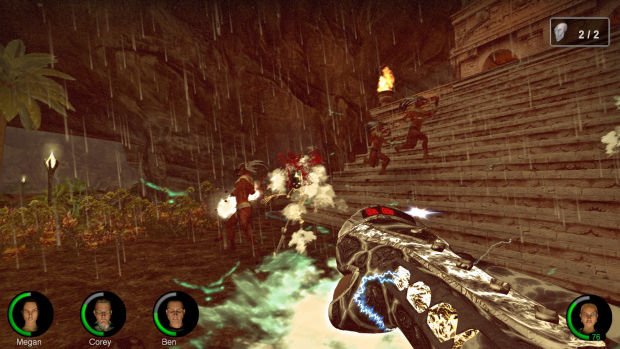 As noted, there is only one weapon in the game — a serpentine wristband that each character awkwardly holds in front of them, arm perfectly straight and rigid like that of a cartoon stick-person. Interestingly, the game’s default controls have absolutely no fire button mapped. You can click the left mouse button all day long and nothing will happen. You have to go into the options and manually set the fire button, which has helpfully been left empty while the LMB sits idle. Once that’s configured, you can scroll through a small handful of fire modes, ranging from regular weak fire to lance-style sniper fire and short-range scatter shots. This game is terrible.

Each of the levels drag on far too long and mostly revolve around running across large maps, picking up items, and booking it to a poorly marked goal. Enemies flood in with little rhyme or reason, and absolutely no intelligence to speak of. The core mechanics of Left 4 Dead are simple but elegant, yet Revelations reduces it to a remedial degree, and still manages to make a sloppy mess out of it. From traps that cannot be avoided and will hold you in place until you die, to ledges that will be slipped off and even minor falls dealing considerable damage, the whole game reeks of something that nobody even tried to balance or make sensible. Why would they? The makers really didn’t care about anything other than scamming money.

At this juncture I would like to bring up the most noteworthy aspect of Revelations 2012: the fact that the central premise seems to be four white people storming into foreign countries and slaughtering masses of primitive brown people. I am not going to say what that implies, what the developers were trying to say, or whether or not anybody should feel awkward. I would merely like to state, without comment, that Revelations 2012 is about four white people killing the piss out of brown people. Brown people who, naturally, wear bones and dance ritualistically around big fires all day long. 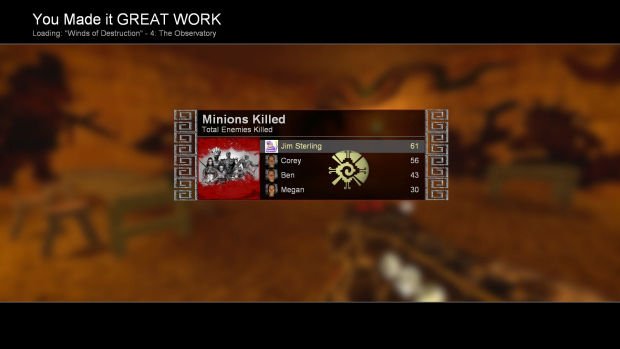 It goes without saying that 2012 is an ugly game, with feature-less chunks of stuff being used to represent characters, surfaces, and a vast array of straw huts. The sound is an absolute mess, with menu and game volumes hilariously out of sync, and various sounds buried so deep in the mix that they’re barely audible. This is a blessing in the case of the voice overs, which are unsurprisingly irritating and sometimes disturbing. Quite why the possibly-British-possibly-Australian man keeps having a profound orgasm every time he regains health is a mystery best left submerged.

Although it’s a cooperative game, nobody is playing it, with anybody unfortunate enough to purchase the thing taking any losses on the chin and bailing long ago. Players will be stuck with the allied A.I., which will jump into traps, stand in the way of bullets, and will often stand behind the player before aggressively opening fire on him or her. To their credit, they will drop anything to revive the player character, but outside of that, they’re painful to play with. 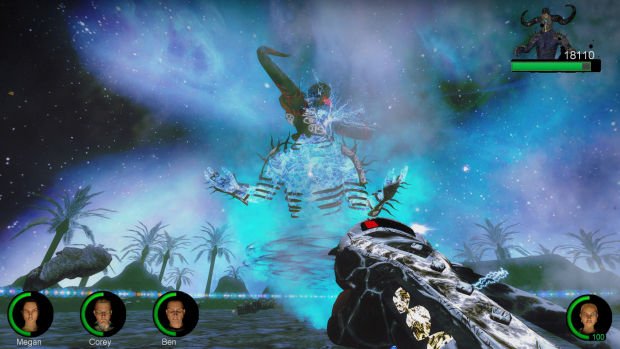 I managed to suffer two hours of Revelations 2012 before calling it a day, but I can’t imagine anybody being masochistic enough to invest more than ten minutes of their own private time. This product would be asking too much of a precious commodity even if it were free, but the fact that the “developers” of this garbage would even dream of asking money goes beyond insulting and inhabits a special plane of disgusting behavior that as yet does not have an adequate descriptor. At least, not one suitable in its tastefulness to facilitate widespread industry use. I have reviewed a lot of bad games in my five years working for Destructoid, but I can safely say, without doubt, that an all-new personal low has been encountered.

We usually refrain from swearing in our reviews, but I must emphatically say that Revelations 2012 is the worst piece of fucking shit I have played on the job, and they can stick that on Metacritic.