The prosperous settlement of Castletown had everything its residents could possibly desire. Lumbering giants had turned a once barren wasteland into a fertile coastal forest, and like titanic servants they had places mines, plants, and animals for the townsfolk to consume and exploit. What began as a dinky village had grown into a mighty town filled with hustle and bustle.

Yet these spoon-fed tiny people were not content. They had everything, but they wanted more. Their gaze drifted across the ocean to the newly founded village of Legionville, nothing more than a handful of tents surrounded by a swamp. The warriors of Castletown took to their ships, and sailed across the ocean, their spears at the ready. Mere minutes after arriving in the swamp, they had utterly decimated Legionville.

And so it was with a heavy heart that I ordered my giants to turn against their charges, pummelling the ground, throwing toxic sludge at the scurrying, shrieking townsfolk. Castletown was no more, punished by their god for their misdeeds.

A god sim with the hint of a puzzle game, Reus makes players the caretakers and guardians of humanity while also giving them the tools to destroy them should their children become too greedy. At first it plays like a simple game that would be more at home on an iPad, before eventually revealing itself to be a deep, tricky strategy title that will swallow up hours of your life. 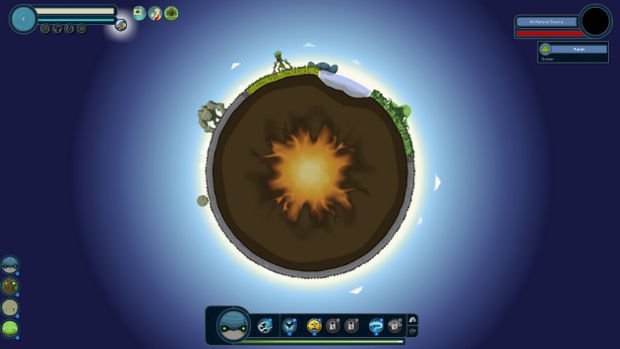 The world begins as a grey, featureless circle — a 2D realm — with a volcanic core. From the dead ground, giants spring forth; great lumbering titans who slowly walk the land in huge strides. These giants are the agents of the player, ostensibly a god, and are the catalysts for the planet’s rebirth.

Each of these behemoths has a niche, represented by their striking appearance. The blue-grey crab giant is a master of oceans, while his sentient mountain friend raises the land and creates deserts. There are four in total, covering the realms of the sea, desert, forest and swamp.

The “goal” of Reus is the development of prosperous settlements; towns and villages that cannot be interacted with directly. To make them grow, one must command their helpful giants to alter the landscape — at first terraforming, then adding resources. 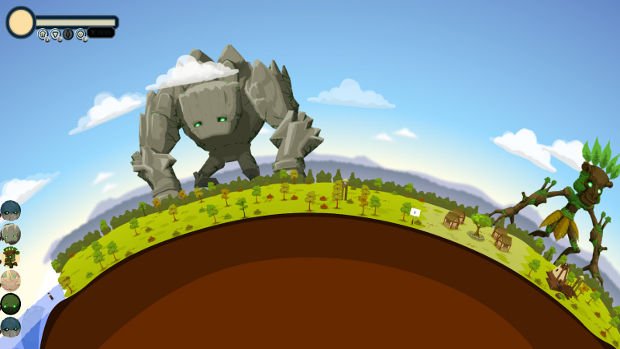 When the first biome has been created and one resource has been planted, nomads will appear, suddenly giving up their wandering lifestyle to settle permanently. Not long after building their unimpressive tent village, the wee humans will start their first great work.

These projects guide players on what resources to lay down, as their completion demands certain things. A shrine, for instance, may require a specific amount of wealth and food before it can be finished. Eventually schools, barracks, foundries, docks, and all manner of other larger structures will get built.

Not only do completed projects provide even more resources for the settlement, they also generate an ambassador. These special individuals can be picked up by the giants, and will sit atop them, giving them a new ability depending on which giant they are offered to, and what type of biome their home town is in. With these new abilities, the giants can augment, upgrade, and completely transform animals, plants, and minerals, allowing the minuscule tent villages to grow into increasingly modern cities.

Every new game of Reus is an opportunity to advance the world more and more. Ticking off items on the long list of objectives — from developing a prosperous town just with plants and animals, to developing one that goes to war frequently — unlocks new resources, and round and round the game goes, getting longer and increasingly complex. 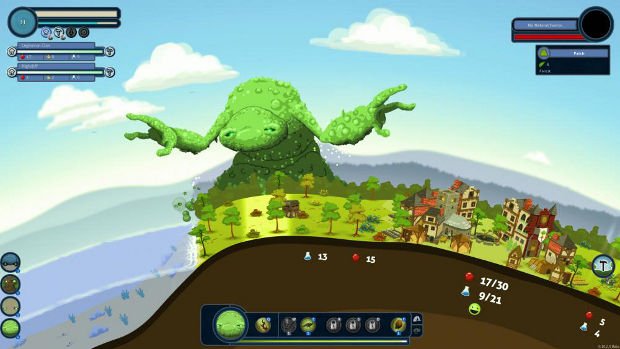 Reus tranforms from something you play for half an hour, lackadaisically sprouting herbs and encouraging fish to appear, to a race against the clock where you’ll explore and experiment with symbiosis, manage greed levels, and watch as different cultures slaughter each other.

As individual games get longer — completing a certain number of objectives unlocks lengthier games — Reus really shows off its depth, and it allows multiple towns to progress through the different stages of civilization.

The key to helping the hapless humans isn’t simply plonking down stuff that generates the wealth, food, and science that they need, as the areas in which you can cultivate resources are very small. Making the most out of limited spaces is what’s paramount. During the early stages of development, towns don’t really require all that much. Projects need only tiny amount of resources that can be collected in a matter of minutes.

By the time the larger, more demanding projects start cropping up, a town’s sphere of influence will have increased, but only marginally, and it’s then that symbiosis and advanced giant abilities come into play. 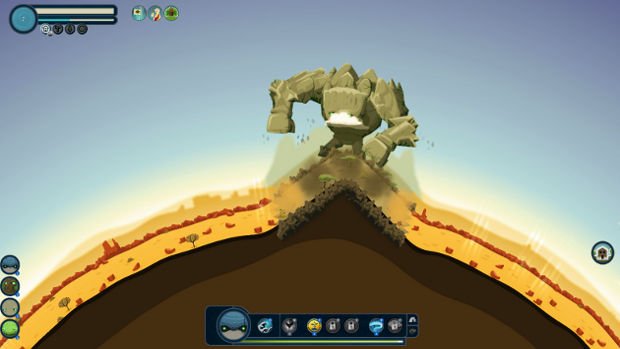 It does go a long way to making these small bits of land dynamic, however, and there’s always a reason to reassess resource placement, destroying old mines to add some plants instead because that’s what the greedy villagers have now decided that they want.

The giants’ mystical abilities, earned through collecting ambassadors (I do wonder what these “chosen” people do while they are hanging around on the heads of giants), allows them to mutate the various flora, fauna, and rocks that they’ve already placed.

This might mean a particular resource starts generating more wealth, but that’s far from the end of it. Once augmented, it can be evolved into an entirely new resource, with new symbiosis bonuses. These more highly evolved species get additional slots so that even more abilities can be used on them, potentially allowing them to evolve again. 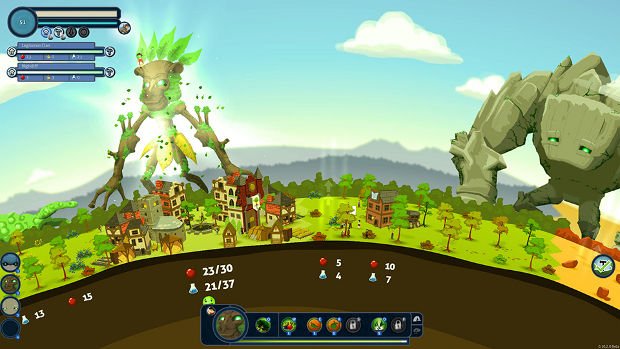 Like the planet itself, the gameplay constantly expands and evolves, adding more elements that you can attempt to place in the surprisingly complex jigsaw, forcing you to play just one more round. During the first half-hour I wasn’t sure how long it could really hold my attention, and then before I knew it, I’d sunk five hours into the bloody thing.

There’s a visual pay-off for all this effort, as well. As civilizations grow, the purely aesthetic buildings start to change as well, as do the little citizens, their period costumes going from tribal affairs to medieval style dress and so on. It has a minimalist cartoon art-style, but it’s detailed enough so that it’s always a joy to zoom in and see what these ant-sized worshippers are getting up to.

The pace of Reus, starting players off with tutorials and then short games, ultimately growing into two hour sessions where all of human history plays out, off-sets the game’s complexity. Its simple controls and clean interface also makes something that could have been an obstinate chore pleasant to get to grips with. At first I bemoaned the lack of more detailed menus and alternative control options, but I miss them not at all now.

Reus is a game of logical, organic systems presented as simply as possible. It’s a delight to play at every turn, and it strikes the perfect balance between providing new content and not overloading players. Beneath its unassuming appearance exists a challenging experience that will last a good long time. Maybe not as long as it took for humanity to grow from nomadic tribes to city-dwelling go-getters, but who the hell has time for that?