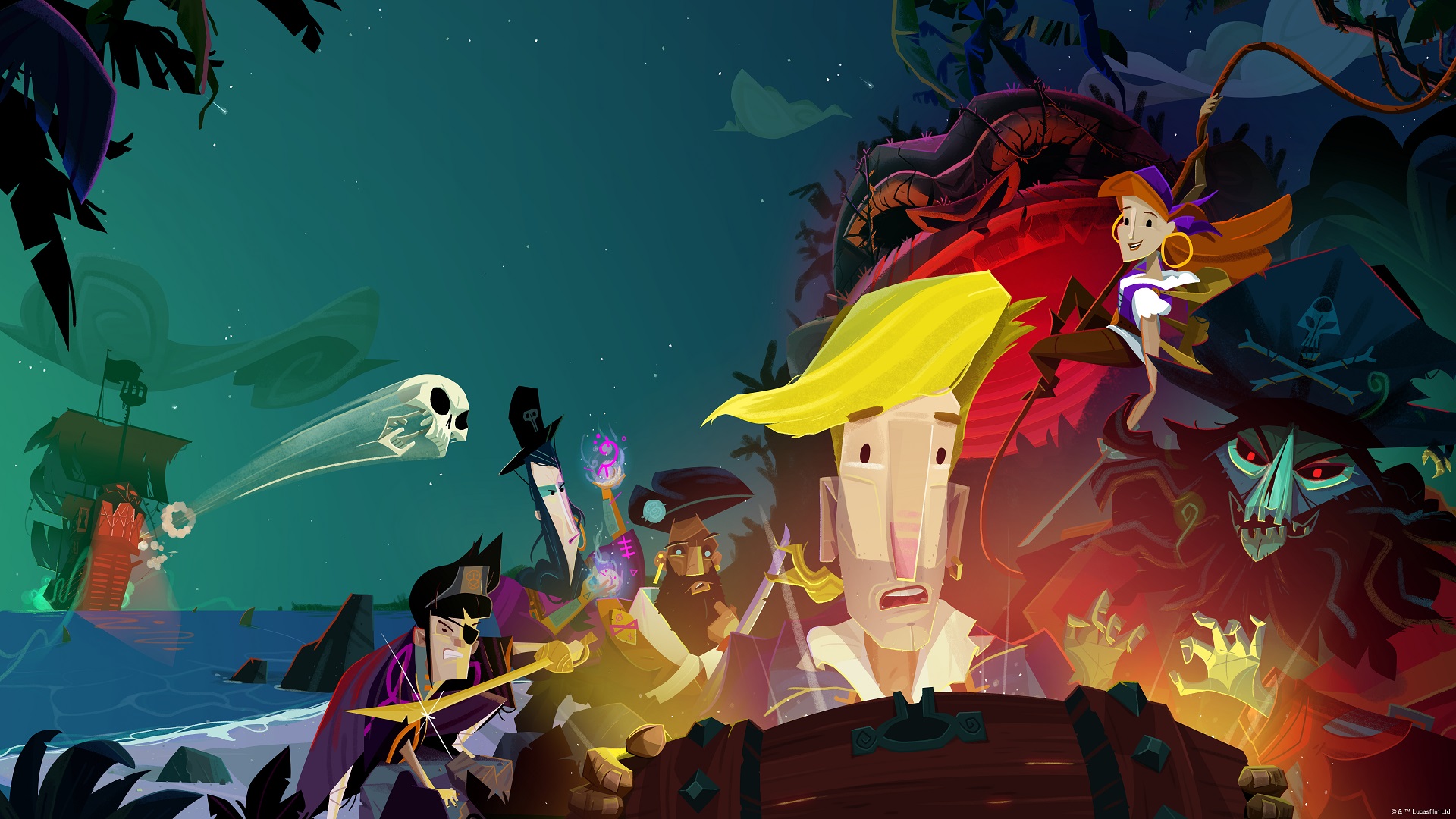 I buckle a mean swash

If you were a friend of mine around the launch of the Special Edition of Secret of Monkey Island, I probably tried to thrust it upon you. I was in the midst of exploring the point-and-click adventure genre, as I had passed it by when I was young, and Secret of Monkey Island was the new high point. Maniac Mansion is a wonderfully well-designed puzzle box, but Secret of Monkey Island is a symphony. Its puzzle design is near perfect, and its humorous script makes it extraordinarily rewarding to solve them.

So Ron Gilbert has rejoined Dave Grossman on the series and has promised to deliver Monkey Island back to its lofty status. Well, I don’t remember him saying that; he probably didn’t. However, that’s how us fans all took it. But can Return to Monkey Island really live up to those classic titles?

Leading up to launch, I heard a lot of speculation about Return to Monkey Island ignoring everything after the second game and being a direct sequel to LeChuck’s Revenge. I want to be clear here, that is not the case. I don’t know that it needed to be the case because the Monkey Island continuity was hardly ever perverted. The first two games didn’t start some overarching narrative that was fumbled when handed to other teams. They were dumb, self-aware pirate tales. There’s even a joke early on that the games are typically bad with conclusions.

No. Murray the Skull has returned, Elaine and Guybrush are already married, and Guybrush even recalls a situation from Tales of Monkey Island. Do you need to have played those games to appreciate Return to Monkey Island? No, but also yes. Return to Monkey Island leans heavily into self-reference. Much of the adventure takes place in locations from the first game, and characters from those turn up. So many of the jokes lean on the “good ‘ol days” that I’m not sure I would have appreciated them as much if I had missed out. Considering my memory is foggy of some of the later titles, I probably missed a fair few, even as a fan.

The story has Guybrush Threepwood recalling a tale to his son. This time, it’s on the subject of the Secret of Monkey Island. But not that one time he did it, this is a different time. He arrives back on Melee Island to assemble a crew and fund another expedition to the island. This time it’s different! There’s a different assortment of pirate leaders, and he secures passage in another way. No, I lied, it’s about as inconsequential as the other Monkey Island narratives.

Being back on Melee Island gives the game an excuse to roll out an assortment of returning characters. Return to Monkey Island eventually does set sail, only to return back. I guess what I’m saying is to keep expectations very low on what kind of story is being delivered here.

On the other hand, I’m happy to report that the puzzle design is about where it used to be. You can choose to play on an easier “casual” mode that cuts down on the puzzle complexity. I didn’t check it out because I’m not certain why I’d want to play an adventure game with fewer puzzles. I’d recommend you do the same since there’s also a hint book available in-game to prevent you from running circles. It’s pretty handy; first pointing you in the direction of where you’re looking, then giving more and more hints until it outright tells you. There’s nothing as obtuse as Monkey Island 2’s infamous “use monkey on pump” puzzle, so if you’re comfortable with ‘90s adventure games, you’ll be fine here.

Use pamphlet on ghost pirate

The humor is also on point, even if it does stick its thumb out to previous games a bit too much. When left to its own devices, Return to Monkey Island has some sharp insight into the world and humanity’s more selfish side. Guybrush himself has a habit of ruining lives just to further his personal goals, and it’s really given the spotlight. It’s less wacky than the latter-day Monkey Islands and closer to the sharp wit of the first two titles, and I think that’s what I and a lot of other fans were hoping for.

It also marks the return of Dominic Armato to the role of Guybrush’s voice. While he didn’t take on the identity until the third game, he’s sort of become the de facto voice of Guybrush. He has this sort of ineffectual front that makes him seem naive while secretly being dizzyingly acidic. He’ll charm you with his naivety, then steal a precious family heirloom just to ruin it to get an item of questionable value.

Other big voices make their return, but since so much time is spent listening to Guybrush and so little of it on the other characters, Dominic’s return is rather key.

No, you say bye first

The big question here is if Return to Monkey Island manages to reach the quality of the original classic titles. The answer is yes, but also no. This is absolutely the closest the series has come to returning to its pinnacle. The puzzle design, the charm, and the game’s flow are all pretty much spot on. Above all, the humor is still as sharp as a shattered Jolly Rancher, landing a lot of chuckle-worthy strikes.

However, it’s the third time this joke has been told, and time hasn’t made it any fresher. So much of Return to Monkey Island is callbacks that it doesn’t feel like it stands on its own. It’s an excellent companion piece for the other games, and a love letter to the fans of the series, but I also feel like it takes a few jabs at them. I can only ever see myself playing it again in sequence with the rest of the series. At the same time, it’s a breath of fresh air after the middling titles we’ve been given since 1991. At least we can stop holding our breath and laugh again.