I have a voracious appetite for good mysteries, even more so for good adventure games. Wadjet Eye Games has been keeping me plump on wonderful offerings like the Blackwell series and Gemini Rue, and now Resonance. After five years of development, I was expecting — hoping — for this to be something special.

I was not disappointed. Fantastic interconnected stories, wrapped up in a grand mystery with four interesting protagonists. What’s not to like? Well maybe a couple of things, little bumps in an otherwise smooth road. 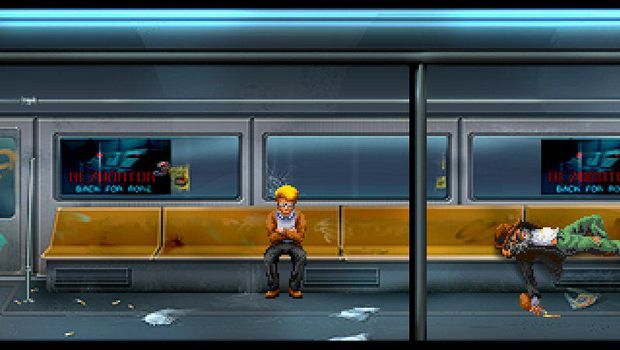 News reports flash images of burning buildings and destruction. All around the world explosions have caused panic. Nobody knows what’s going on. Nobody reporting the news, anyway. It’s a glimpse of what’s to come. Three months earlier, four people — strangers — find themselves brought together after a mysterious lab “accident” and an unexplained blackout. A promising young scientist, a dream prone doctor, an anachronistic cop, and a journalist who doesn’t take kindly to being called a blogger; an intriguing bunch to be sure.

Ostensibly, Resonance is a science fiction mystery. A twisting one wrapped in conspiracy and a great deal of paranoia, but it’s restrained. Bennet and Abbot, the at-odds cop and journalist, are laymen when it comes to matters of science, and they keep things grounded. It’s the interactions of the characters, their attitudes and quirks, and their often amusing banter which makes the adventure such an enjoyable experience.

They work as one might expect from new acquaintances thrown into a difficult situation. There’s trust issues, awkward flirting, and bickering. The voice cast is made up of voice actors from other Wadjet Eye adventures, and also that Logan Cunningham fellow that people seem to like from that Bastion thingamabob. Their delivery is generally good and the consistent quality gives strong voices 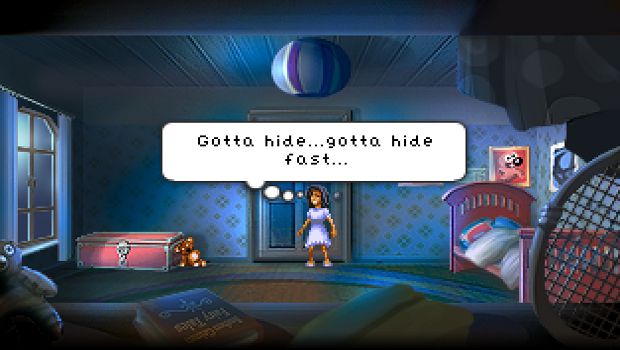 All four characters are controllable, and lots of puzzles involve them working in tandem. The puzzles involving more than one of them aren’t particularly complex, however, and the solution can be gleaned easily. It’s often simple things like having one character press a button which lets their companion through a door, that sort of level of puzzle. Of course, they tend to be a lot more inventive than that hypothetical example. Often a character will pick up an object that they can’t use, but another member of the group might. While managing four inventories could have become a chore, who can use what is often a matter of logic. Having four different perspectives makes tasks more layered and involved and demands that you look at each scene in a variety of ways.

While few of the puzzles are going to break the mold, the memory mechanic is certainly innovative. All points of interaction can be dragged to a characters’ short term memory, where they are stored temporarily and can be used in conversation puzzles. Of course, not all will be relevant, though many set up some amusing dialogue.

Unfortunately, perhaps due to the developer wanting to get lots of use out of the mechanic, it starts to obfuscate rather than help. For instance, if I’m going to a shop with one goal, a goal the characters have already discussed, the dialogue options should reflect this. I should not, instead, have to select the actual thing I want to talk about from another location and then select it in the conversation. 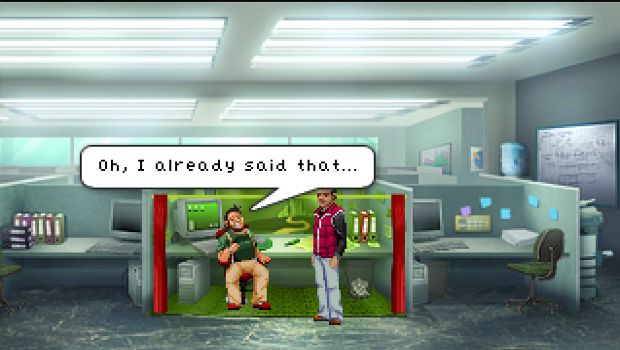 Long term memories, on the other hand, are employed more proficiently. Characters gain these automatically at key points in the game, they are then accessible permanently. The memories can be replayed, used in dialogue, and are key to solving the mystery. Anna, the doctor cursed with several family tragedies, finds herself beset by unsettling nightmares. Within these nightmares are real events, memories that she can recall upon waking. The dream sections are frantic, haunting and a wee bit disturbing and yet offer solutions to problems in the real world. Psychologists rejoice!

I have no issue with inventory and item puzzles, but being able to use less tangible things like memories to progress through a game is an absolute delight. The characters experiences become solutions, and the environment is used in a more meaningful way. But that’s not to say that there isn’t a great deal of physicality in Resonance. There’s climbing, lifting, fleeing, hiding and even a spot of frustrating electrical rewiring. It can be as tactile as it is abstract.

Although there are lots of avenues for investigation open at any one time, the characters give plenty of direction. When asked, they will nudge the player along by hinting at the next location they should visit, or what they need to do to move on. It clears things up and it never seems unnatural. It’s one of the better integrated hint mechanics that I’ve come across. Abbot also keeps a record of his personal goals, which usually reflect the goals of the whole group, on his phone. Again, it makes sense and yet is extremely helpful. 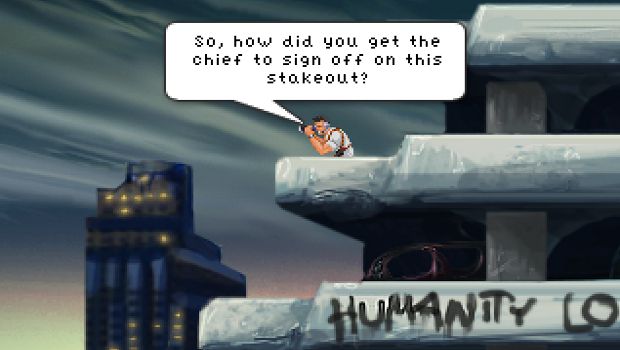 The world is presented in a way that should have broad appeal. Aventine is a downplayed sci-fi city brought to life with subtle touches like flickering lights and panels, and well-animated NPCs displayed in polished pixel art. Behind them lies detailed backgrounds with a hand painted aesthetic that contrasts with the characters pleasantly. Though it’s still in keeping with its indie sensibilities. All in all it’s rather gorgeous, but in a way that isn’t immediately noticeable.

The high stakes of the adventure — end of the world stuff — aren’t overplayed, but things move at an appropriately swift pace. There’s no reason the game can’t be completed over a weekend or a lot quicker. Puzzles are common sense, but remain infinitely satisfying when the solution is discovered, so it keeps you constantly progressing.

You really can’t go wrong by spending some time with Resonance. While at first glance it may hark back to games like Beneath a Steel Sky, it’s a fresh, modern mystery. It’s set the bar rather high for other adventure game developers, and not just indies, though they really drive the genre right now. It might have been over all too quickly, but it was undoubtedly worth the five year wait.