Resistance has always been a bit of a strange series for the PlayStation 3. As an exclusive, it’s always enjoyed added exposure and attention from press, but divisive opinions on its quality and the dated nature of its gameplay have awarded it far less commendation compared to the likes of inFAMOUS and Uncharted.

Almost taking its place as the “B” shooter compared to the big-budget Killzone, Resistance is a series that has struggled to find its place, and the past two main entries have been so different that the lack of a unifying identity could be considered detrimental.

With Resistance 3, however, Insomniac Games may finally have found that special something. 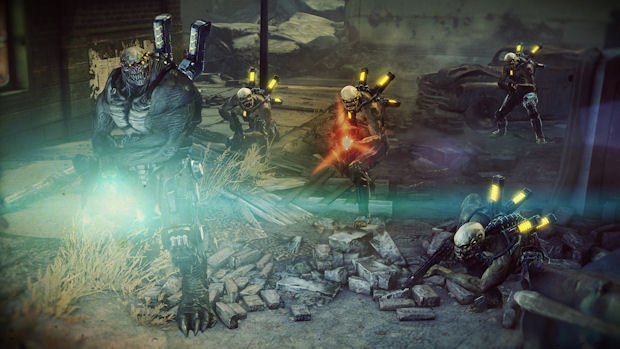 Resistance 3 plants us in the United States, with the Chimera still firmly in control of Earth. Joseph Capelli, the man responsible for killing former protagonist Nathan Hale, has been dishonorably discharged from the Army and is hiding with a group of survivors in Haven, Oklahoma. Naturally, his eked-out existence doesn’t last forever, and the revelation that Chimeran forces are freezing the planet prompts him to head to New York to try to save humanity from a fatal winter.

With Resistance 3‘s campaign, one gets the sense that Insomniac has finally brought its “A” game to the series. Taking place across twenty chapters that will take around eight hours to complete, Resistance 3 starts solid and gradually ramps up the vivacity to tell a story that consistently improves as it progresses. Its range of set-pieces, variety of levels, and sometimes-overbearing intensity of combat makes for a game that feels so much more involving than past Resistance titles, with a fluid progression that feels natural and well-paced, as opposed to sluggish and monotonous.

Fans of the first game will be thrilled to note the welcome return of features nixed in Resistance 2. For a start, regenerating health is out of the door and persistent damage is back. Those used to modern shooters will find the reliance on health packs quite jarring, but Insomniac has done a great job of providing just enough pickups to get the job done, but nowhere near enough for it to feel easy. Also returning is the weapon wheel, with over eight firearms to collect and keep at the ready. Familiar guns such as the target-tracking Bullseye and explosive Magnum are joined by new armaments, and each can be upgraded twice to gain new useful abilities. 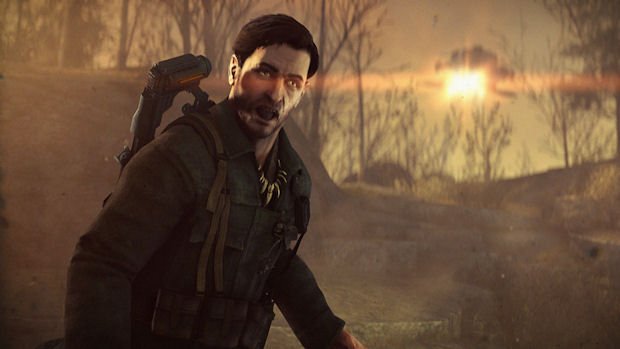 Of the new weapons, the Mutator easily takes center stage. After charging up a shot, it can be fired at a regular enemy to rapidly mutate its body, turning it into a pulsing mound of warped flesh that can be shot and exploded. It can also fire a hanging fog that transforms a group of foes, and may be upgraded to turn mutants into puppets that seek out uninfected enemies and pass on their condition. In terms of sheer sadistic entertainment, the Mutator is an utter joy, allowing one to revel in malevolent glee as the victim screams in terror and begins to bubble with pustules. It’s a work of art.

One thing that truly stands out with Resistance 3 is just how atmospheric it is. There are moments where it feels like a horror game, as players explore abandoned towns or take haunting boat rides in levels that remind one of the famed “Ravenholm” section of Half-Life 2. As zombie-like Grims and exploding Leeches stalk the player, their soggy footsteps growing closer, Insomniac has a very good chance of scaring the pants off its audience. Even during the action-heavy sequences, there’s a foreboding, bleak moodiness running throughout. For fear of spoilers, I won’t go into the prison-based chapter, but I’ll say it provides the exact moment where Insomniac’s narrative goes from enjoyable to enthralling.

With beautiful graphics and accomplished sound that provides excellent player feedback in terms of when enemies are defeated and where attacks are coming from, Resistance 3 is a sleek and sexy affair. Unfortunately, the otherwise high production values are marred by notable glitches. On multiple occasions, I had to restart checkpoints due to events failing to trigger and trapping me in an area. The sound can also falter on occasion, suddenly growing silent or falling out of sync with the visuals to a noticeable degree. While none of these errors truly ruin the overall experience, they are definitely annoying, and frequent enough to hinder what is normally well-crafted gameplay. 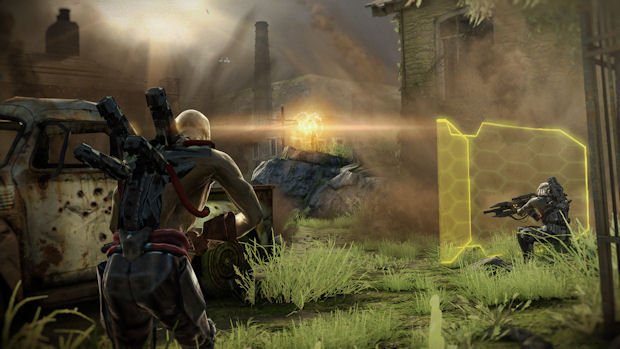 The game can be played cooperatively, either via split-screen or online with a friend. Drop-in/drop-out cooperative play is not featured, however, which is a real negative for games these days. Having to invite friends, rather than leaving my game open for randoms, is a needlessly old-fashioned and convoluted way of doing things. There is also PlayStation Move support, which works quite well, save for the garishly huge targeting reticule that it uses. As always, motion control makes it far easier to hit targets, at the cost of feeling more awkward to use. A patch is coming that lets players move the screen while using a gun’s sights, which it currently does not.

Naturally, multiplayer is a big part of the experience, with 16-player matches taking place across a range of familiar gametypes. Standard deathmatches, capture-and-hold, and attack/defense modes are all in place, and while the PvP combat isn’t exactly innovative or spectacular, it’s plenty of fun. The true joy of Resistance 3‘s multiplayer is that every player is overpowered to some degree. The ostentatious weapons and immensely useful special abilities make each character, no matter how long they’ve been playing, a formidable opponent. Even a starting player with a bargain-basement loadout has the tools to make some noise.

Players unlock pre-packaged loadouts as they earn experience points, but also gain Skill Points with rank increases. These points can be used to unlock weapons and powers for custom loadouts, allowing players to tailor a character to their play style. Whether they want to heal allies, spot and mark enemies, cloak their bodies or throw up shields, there’s a range of powerful abilities that can create some unique players. Oh, and you can fill your body with parasites that burst out to attack opponents upon death. Naturally. 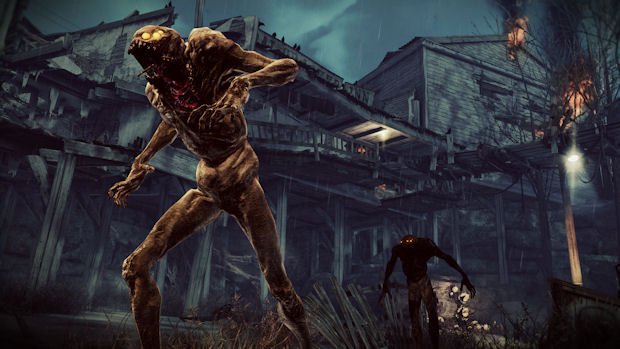 I really dig Resistance 3‘s online mode, and its commitment to chaotic gameplay and overpowering weaponry adds a level of involvement that many online shooters have started to lack. Unfortunately, Resistance 3 uses an online pass that cannot even be redeemed in-game, and I find that particularly obnoxious. As far as I’m concerned, Sony’s first-party titles have no business partaking in the online pass parasite party as long as Sony cannot make its PSN functions more integrated and fluid. Resistance 3 forced me to exit to the XMB once I beat the campaign and wanted to try the multiplayer — I had to enter the PlayStation Store, redeem my code, download and install the add-on, and then fire up the game again.

Furthermore, Resistance 3 takes over forty-five minutes to get started, requiring two lengthy mandatory updates and then a forced installation before players are even allowed to see the menu. Considering that glitches and loading times are still apparent in the game, I see no excuse for this. It definitely provided a detriment to the overall experience and caused harm to a game that is beautifully put together — once the walls that Sony erected around it are broken down.

The real question is this — is Resistance 3 good enough to be worth the hassle? To that question, I would say yes. However, that doesn’t mean the game should get off scot-free. Having slogged through so many barriers to get into the game, it was definitely a fun ride, but a ride that was paid for not only with money, but frustration. Adding bugs into the mix certainly degrades the overall entertainment value. 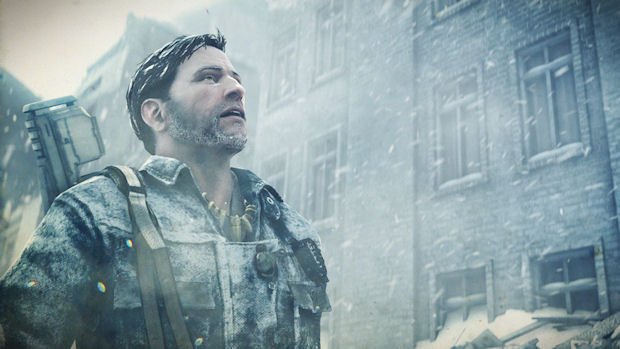 What should be hailed as a masterpiece is therefore recommended as very, very good. That is, however, a positive thing and should be taken as evidence that the game is truly excellent enough at its core to be worth the hassle. It is confounding, as my instinct is to harshly punish a game that is full of such enormous corporate-flavored problems, but it would be wrong of me to do so while ignoring what an august product lies within.

Resistance 3 is held back by issues that lie with both the developer and publisher, but when the problems are weighed against the triumphs, Insomniac’s latest comes away with a net win. Its campaign is a thrill ride of rollercoaster-like set-pieces, huge boss battles, and consistently fast-paced action, and its multiplayer is a solid, enjoyable, anarchic complement. If you own a PS3 and you love first-person shooters, you would do well to add this one to your collection.