What’re ya buyin’? This game

While Capcom may have moved on, I never stopped thinking about Resident Evil 7‘s VR mode. Out of the now-hundreds of VR games I’ve played to date across multiple devices, it was the only one where I took my headset off to take a breather. It was a rare intense experience, and I’m saddened that the powers that be decided not to repeat the experiment for Resident Evil Village.

That said, we got Resident Evil 4 VR instead, so it works out. 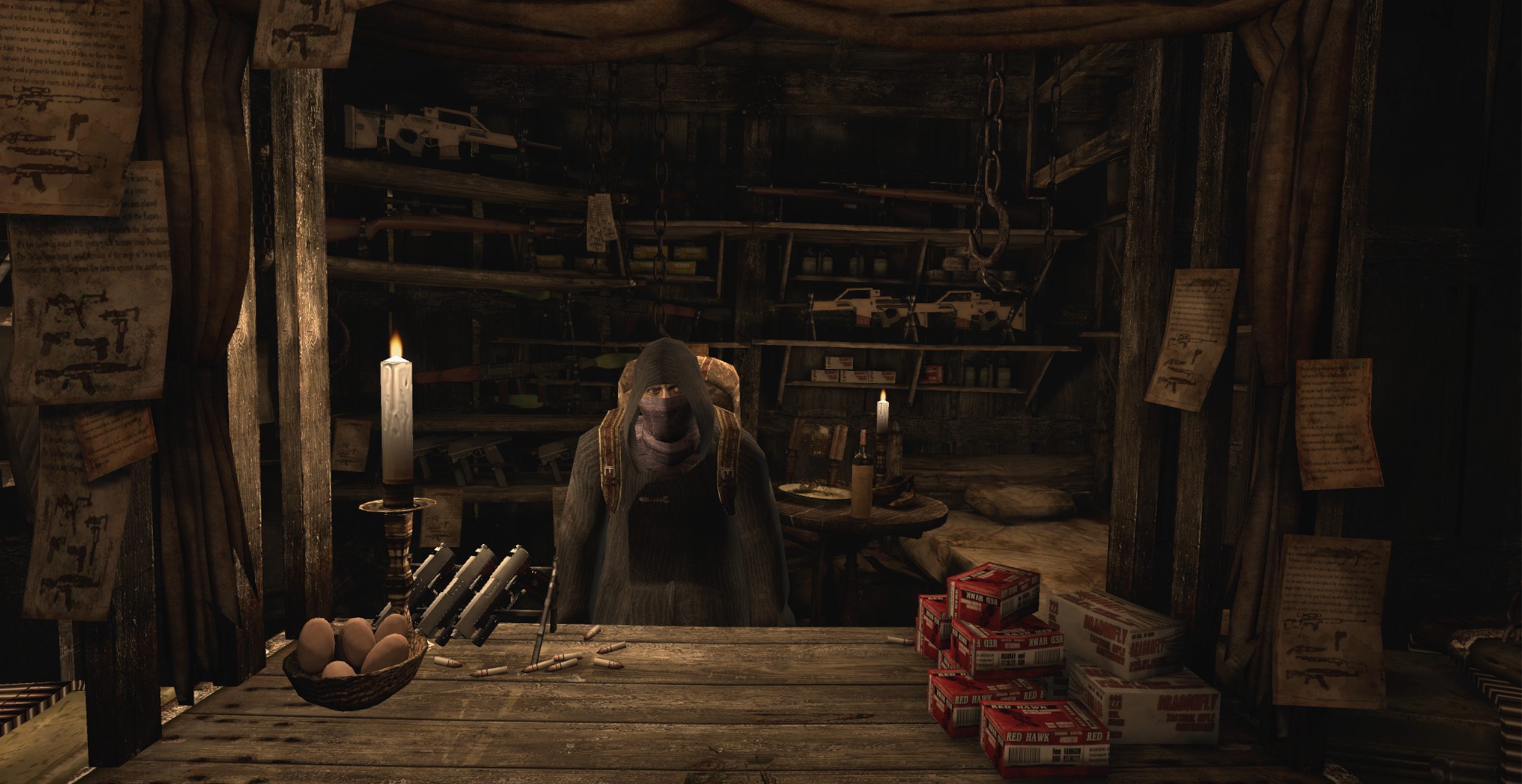 So at first, I kind of wrote this project off entirely. Like a lot of people, I assumed this was a classic “AAA VR adaptation” experience: akin to a cherry-picked, Chuck E. Cheese theme park port with guided experiences. Nope! It’s legit the full campaign (more on that later) for Resident Evil 4. The initial panic of the raid on the small house: it’s there. The village with the chainsaw dudes? It’s in the game. Walking from place to place, shooting down blue medallions, finding and guiding Ashley? The boss fights? The merchant? All there.

Guided by the untethered Oculus Quest 2 and the isolated spatial audio G Pro X headphones, I kicked off my adventure back into the world of Resident Evil 4, and was frankly blown away. It’s very easy to understate this, but having played RE4 on every single platform since the GameCube, walking around this world in VR felt absolutely transformative. My entire strategy changed when it came to muscle memory and tactics I had used for nearly two decades. I know that the Oculus Quest 2 isn’t a mainstream device in many eyes, but this is a system-seller.

It’s a bit silly, I know, when you really think about it. “So after all this time, all VR can muster is a port of an old game?” Well, that’s only part of the story. I think if studios had focused on porting tried-and-true classics and presenting them in a completely new way, VR would have had an easier time gaining market share and selling itself to people who grew up on said classics and now have disposable income. The marketing campaign was a bit too broad at first and prohibitively expensive (as most high-end sets were tied to gaming PC performance). That’s changed with the more accessible Quest 2. But let’s get back to the game.

Astoundingly, Resident Evil 4 VR has the kitchen sink of VR comfort options. Practically every slider and consideration since the Oculus Rift consumer version 1 launched in 2016 is here in glorious fashion. You can instantly swap standing or sitting mode (the latter puts your gun and ammo holsters closer to your chest). You can use teleport movement for comfort, or utilize full analog stick 1:1 console version locomotion (and even turn on/off strafing!). Players who get motion sickness can slide all sorts of knobs to account for tunneling (which makes turning and movement less immersive), you can choose a dominant hand, and so much more (there’s even a boat control toggle section).

Perhaps the best addition is the recent trend of immersive item grabbing that’s been on the rise in shooters in the last few years. Reaching over your top left shoulder and using the grab button will let a first aid spray pop into your hand, your left breast pocket is the knife, and the left hip is tied to ammo for reloading. Your top-right shoulder is your secondary weapon (rifle, shotgun), right breast pocket is your equipped grenade, and your right hip is your sidearm (usually a pistol). Or you can opt for a classic “quick menu” dial that you can bring up in-game.

Naturally I went for the former, and it was game-changing. For as much time as you spend in menus in Resident Evil 4, this version allows you to completely avoid them on a regular basis by putting just about every essential item on your person. This includes a sleek watch that provides key information (like your health meter) just by looking at your wrist. If you want, you can go into your inventory and kick it old school, by reloading as well as healing via menus. They thought of everything so that everyone, from the most stalwart fans to complete newcomers, can be happy.

As a heavy VR touch control user and veteran of Resident Evil, I feel like I trained my whole life for this. Getting into VR and replaying the base of RE4 was like riding a bike, from discerning which treasures to keep/sell to what weapons to use, to dealing with individual enemies and bosses. Yet, everything felt fresh because of the way VR presents everything (the QTEs are still roughly the same, with trigger pressing and waggling in tow, but are so sparing they don’t ruin the game — plus there’s a toggle for more comfort with them).

The first thing I noticed was that using the knife was so much easier, because it’s always there on your chest. This is the sort of thing I mean when it changed up how I played Resident Evil 4, as knife runs are suddenly a more enticing prospect when you have complete control. The only hang-up is that when punching out windows (or locked cabinet doors), I wanted to physically punch them, but had to use the knife like the original. Following the rules of the original makes perfect sense in context.

So the remake elements as a whole are very slight. Ashley takes less damage now on easy and normal, which is a change most people are not going to quarrel with. Puzzles, chests, and cranks are essentially the same, as you know have a VR space to work with as you move around tiles, physically press buttons, or open a handle. Again, it’s genius to go with a more purist approach to this, as the VR control method is the main thing that sells itself, which works very well in tandem with the strong framework and personality-driven environments of the original.

But it was more than nostalgia driving me to keep playing on a constant basis. It’s really hard to explain the feeling of looking down on the gondola area or looking up at the castle and taking it all in with a full head tracking view. Even with the older visual style, they look absolutely stunning: a testament to how well the game has held up after all this time.

While Resident Evil 4 isn’t strictly scary, and led the series down the path of action, it is occasionally unsettling, and definitely freaky. Imagine hearing this ominously, with spatial audio, completely isolated. Or turning around and seeing a chainsaw-wielding maniac right in your face. I’m not ashamed to admit I screamed obscenities several times (a wolf jumping right at my face after turning my head around while running forward, and the aforementioned Regenerator pop-up).

Getting stared down by a creature in a hallway is much more intense. While the reaction in a prior version may have been a binary fight or flight, it’s a bit more nuanced now. Sometimes I’m actually paralyzed with a decision point in real-time because of the imposing figure of a character model or the sound they make. It’s the power of VR in action, and something the industry has done a really bad job on selling all these years.

After I finished normal, I unlocked the professional mode difficulty, the ability to purchase the Matilda and infinite rocket launcher items, and the first set of extra costumes (casual and police). I know what you’re thinking here: there is no Assignment Ada/Separate Ways/or Mercenaries. Nor can you get, in my experience, the unlockables related to those. Ouch! I can hear the boos at the screen now.

I’m not going to lie, it’s a disappointment. Resident Evil 4 has fantastic side modes, and evolved mercenaries into a fully-fledged game and mode for future iterations beyond what the series had done with it in the past. With all of the side content intact, I would have given this VR port a 10. Of note, the merchant shooting range minigame, both in-world and via menus, is still intact.

Still, you’re getting the entire campaign, and that’s an important thing to circle back on. You know how the Wii version came out, and pointer use changed the way you played an already fantastic game? It’s like that all over again, but on a bigger scale. At this point I want all of the Resident Evil games to get this treatment. Hell, bring Dino Crisis back like this, so I can look backward and see a T-Rex running at me while hoofing it. Port Onimusha and add real-time swordplay. The sky is the limit!