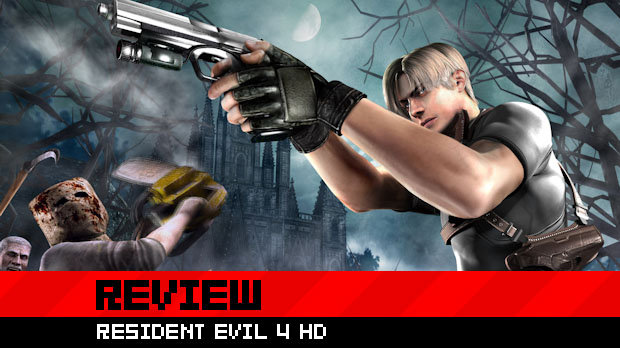 I’ve met a lot of different folks in my life: genitalia-lacking asexuals, people who eat glass, people who have sex with broccoli, guys who hate pizza, women who braid their ear hair; the list goes on. That said, I’ve never been more freaked out than when I met a fan of action-horror games who hated Resident Evil 4. It just didn’t compute.

That’s because Resident Evil 4 is a near-perfect game. You’ve got the “keep-away but with guns” gameplay hook, the relentless but never overwhelming pacing, the art direction, the enemy variety, the extras, and more. There is a reason why the game is cited as one of the primary inspirations for Gears of War, Dead Space, and multiple other extremely successful third-person shooters — Resident Evil 4 reinvented the genre. It did for the action-horror genre what Super Mario 64 did for 3D platformers and what Ocarina of Time did for 3D action-adventures. It’s easily one of the most important games of all time.

The question here is if it is important enough to buy again on PSN/XBLA for $20, sans any new content. Read on to find out. 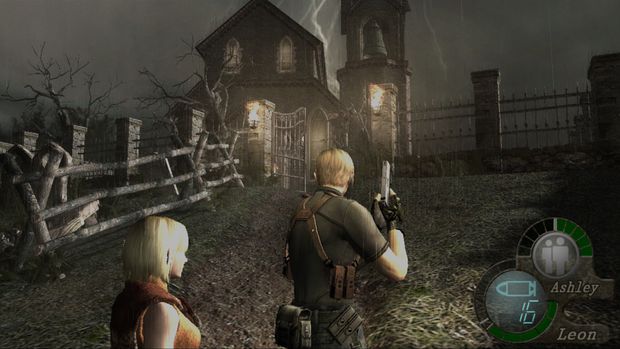 Playing Resident Evil 4 again for the first time since I picked up the Wii Edition in 2007 was a really interesting experience. Seeing the game again over four years later reminded me just how much gaming has changed since then, let alone since the game was first released on GameCube in 2005. It felt a little like going back to Super Mario Bros. 3 after playing hours of Ms. Splosion Man, New Super Mario Bros. Wii, and Super Meat Boy.

Like Mario 3, Resident Evil 4 has a simplicity that exemplifies elegance in game design mixed with an unapologetically subdued look (at least by today’s standards). In Resident Evil 4, there is no co-op partner to cause chaos, no cover system to worry about, no psychic powers to manage, and no immediate signs of giant freaked-out mutants or crab-faced devil people. For the first few hours, it’s about a normal-looking guy doing his best to survive in a normal Spanish village against regular people armed with pitchforks, chainsaws, and other rusty implements of mayhem.

Remember that scene in Gymkata? Well, that’s basically how Resident Evil 4 starts off (except with much less gymkata). 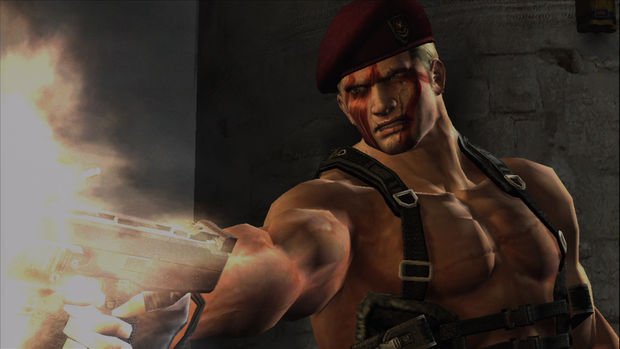 The game proves that sometimes all you need is a simple gameplay hook, as well as the bravery to stick with it, in order to drive home a compelling experience. Like the Pac-Man series, Resident Evil 4 is the pressure of escaping from enemies, conserving resources, and launching an expertly planned counterattack at just the right moment.

The game utilizes the infamous “can’t run and shoot” control system that frustrates the crap out of many action-loving gamers, yet it makes perfect sense to those who appreciate the tension that comes from a little powerlessness. You want to keep enemies away from you in the game, so you’re tempted to run. However, in order to eliminate any of the threats constantly advancing toward you, you have to stop running and take aim. You better make those shots count because you only have so many bullets, whereas your enemies have unlimited strength with which to strangle you and bottomless tanks of gas for their chainsaws.

Score some perfectly placed hits on your moving targets and you’ll stun them, giving you a limited amount of time to run over and lay into them with some brutal fisticuffs of your own. This allows you to do more damage, save ammo, and perhaps most importantly, feel like you’ve finally turned the tables on a game series that has always been about keeping enemies as far away from you as possible. It’s essentially the “Power Pellet” moment of the game — you have a limited time to eat the ghosts who are normally the ones who’d eat you on contact, but in this case, the “ghosts” just happen to be middle-aged Spanish guys (and ladies) with really bad skin. 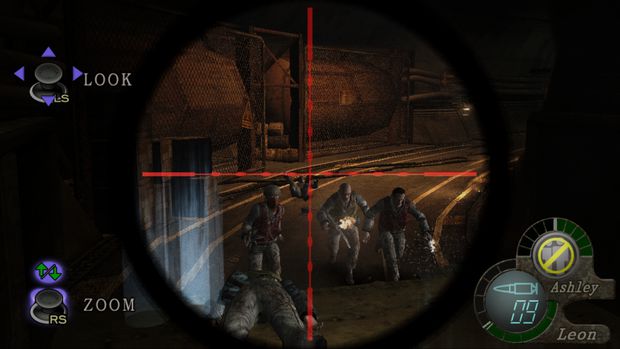 It’s not too far along into the game when Capcom flips the script on this gameplay hook. For reasons too good to give away here, your old strategy of shooting guys in the face and then running up to them with a roundhouse kick will completely backfire on you later on, beginning with a scene that only foreshadows the endless surprises awaiting you in the rest of the game. I’m still shocked by just how many incredible gameplay ideas this game has while retaining the central “run, stop, and pop” rhythm that quickly becomes second nature after sinking your teeth into the game for a few hours.

If you’re like me and you play videogames largely to see how imaginative and inventive game developers can be, you’ll love Resident Evil 4. If you’ve never played it before but have played and enjoyed its much less creative and compelling sequel, or any of the Dead Space or Gears of War games, I’m going to ask you to stop reading this review now and just buy Resident Evil 4. You’re really wasting your time reading about it when you could be experiencing the game for yourself.

Note that I didn’t say you should buy this version of Resident Evil 4. While the value of the game is not up for debate, the value of this particular repackaging is definitely something worth a second look. 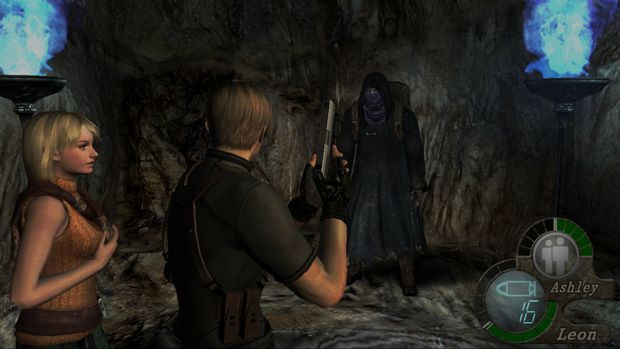 After the amazing load of new features and extras that Capcom included in Street Fighter III: 3rd Strike Online Edition, I don’t think it’s unreasonable to have hoped that we’d get some new content in this HD release of Resident Evil 4. Sadly, that didn’t happen. This is the game as it appeared on the Wii, with all the great features of that version of the game, only in HD. That’s still a lot of content, but the lack of even a new costume, let alone PS Move support for the PS3 version, is a little underwhelming.

As for the HD graphics, there is almost nothing to say about them. These are Resident Evil 4‘s original polygon models and textures, just with less jagged edges and better color separation and saturation. For some, that will be a big deal. For me, it is perhaps the least important visual upgrade I’ve ever experienced. I did feel a sudden sense of “whoa, the game does look slightly better” for approximately three seconds when I first booted up the game. Then, after my eyes were accustomed to the higher definition, I didn’t notice it anymore. Just to be sure, I popped in the Wii version right afterwards. Sure enough, I felt a twinge and thought, “hey, that’s a little more mushy and edgy,” then three seconds later, I didn’t think about it anymore. 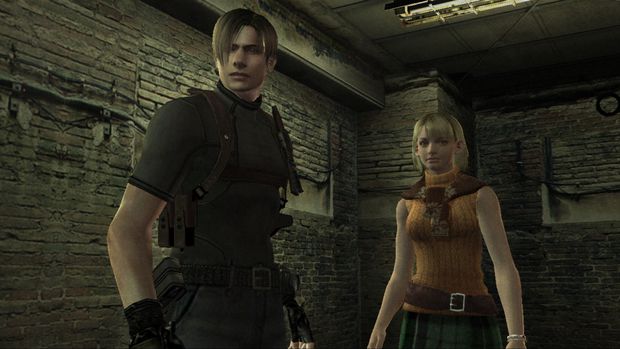 It really makes me sad that so many people let these tiniest of visual differences deprive them of enjoying games from the PS2/Xbox/GameCube era, especially when there was a time when they were very impressed with what those machines could do. It’s great to have standards, but when those standards cause you to dismiss wonderful experiences because they have a slightly less colorful or slightly less sharp picture than you’d like, you’re not doing yourself any favors. Anyway, that’s a topic for another time. For now, let’s wrap up this review.

Resident Evil 4 is a 10 out of 10 game. This repackaging of the game is not a 10 out of 10 product. If you already own Resident Evil 4 on the Wii, there is absolutely no reason to buy it here other than the HD-ness, which did nothing for me. Fans of HD-ness should adjust their own levels of interest accordingly. Additionally, if you only had the PS2 or the GameCube versions before, this is a nice way to get the extra content of the PS2 port along with the superior graphics of the GameCube original. Still, $20 is pretty steep for a digital copy of a game this old.

Aw, who am I kidding! This is Resident Evil 4 we’re talking about! How could I give it anything less than a…