Resident Evil is one of my most-played series in my three-decade-long gaming career. I still recall the first time I played the original: where I was, what my room looked like, how it felt to finally finish that last stand finale.

But my appreciation for the franchise only grew from there. It’s insane to think about how each entry has brought something new to the table: Resident Evil defined survival horror for many years and gave us the memorable mansion setting, RE2 boldly went with the dual protagonist route, RE3 dialed-up Mr. X and had the Nemesis stalk the player while randomizing items and providing small narrative choices, and RE4 brought the series into a more action-oriented direction and shook the industry to its core. That’s to say nothing of the co-op refinements of RE5 and the many virtues of RE7. I’m not forgetting a mainline entry, am I?

The point is, Resident Evil is pretty much always relevant, and the RE2 and RE3 remakes are only proving that assertion: though the latter makes a slightly weaker case than the former. 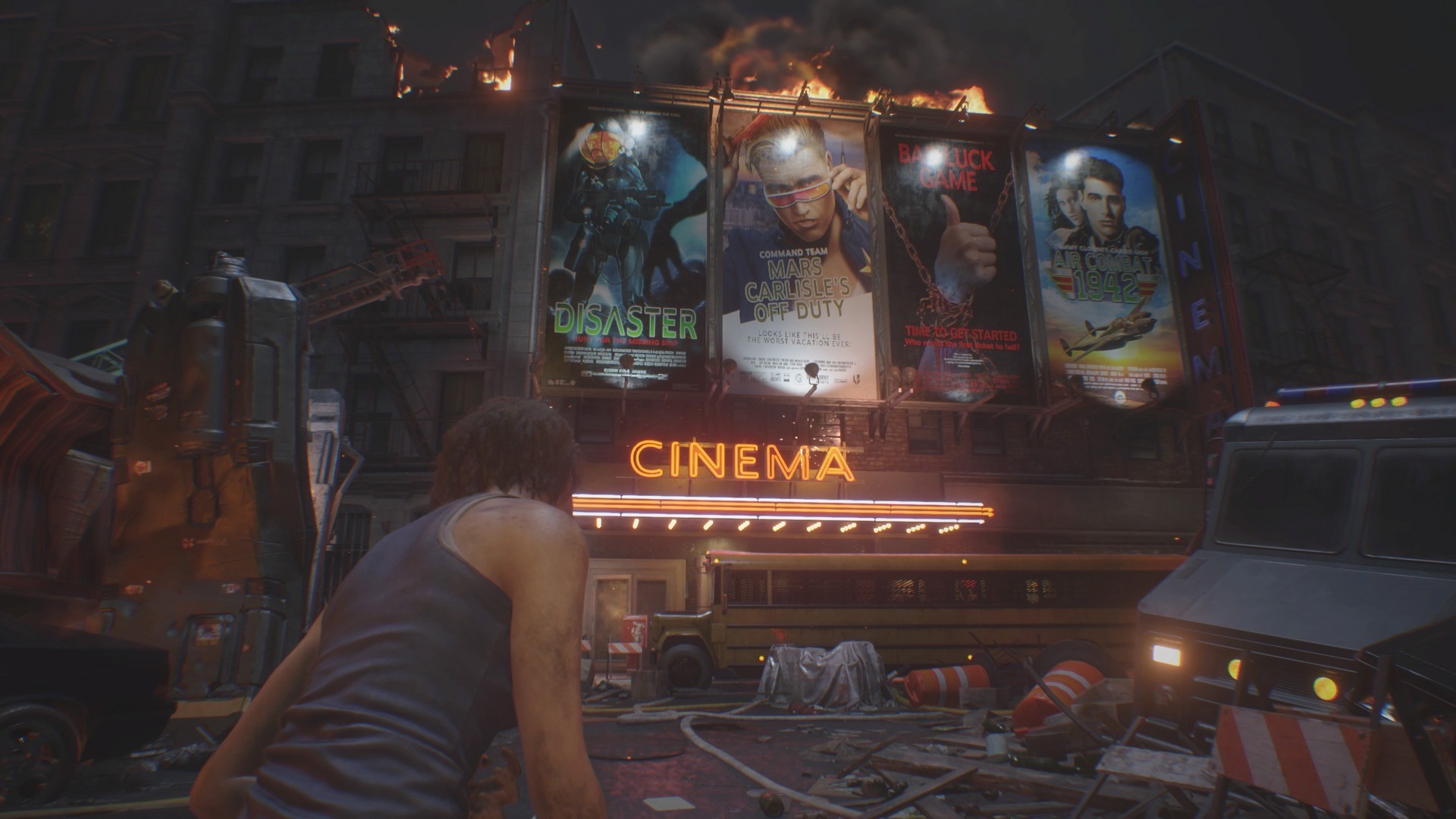 It feels like forever ago when a Resident Evil 2 remake was just a pipe dream: a mere Facebook post that ran on a hope and a prayer. But it did come out, and it was universally beloved. I’m not so sure Resident Evil 3 is going to have that same warm reception.

I’ve always been of the mind that in many ways, the original RE3 is a better game than the initial release of RE2. I was pretty much alone at the time, but over the past two decades and hundreds of speedruns later, some people are coming around to it. The Nemesis is a large reason why RE3 has so much personality: an indomitable force that’s always present, or makes his presence felt if he isn’t physically around. He was, and still is, a perfect horror schlock amalgam, much like Jason Voorhees or Michael Myers.

His looming doom is impactful in this remake where he could be lurking around every corner, sometimes in a comical Looney Tunes-like fashion. The dodge system (which is more like a modern parry and less wonky than it was in the original) also fulfills that same oddball touch of making you feel more tense in the moment. Resident Evil 3 made a deliberate choice to start shifting the series to an action focus, and the remake continues that trend, dialing things up. The dodge is hard to master, but like many modern action games, provides a sense of accomplishment when you finally nail it. Also, kudos to Capcom for bringing knife runs back to the forefront.

The new framework as a whole is a stark contrast to Resident Evil 2‘s labyrinthine, lonely feel: for better or worse. Much of RE3 takes place on the open streets of Raccoon City. You have a squad of special forces-like characters backing you up and more citizens are running around more frequently, which consequentially allows the city to feel more lived-in. It’s bigger, but in some cases, more bombastic. RE3 was always comfortable walking that action-survival tightrope and continues to do so in 2020.

This is no more evident than the intro of the game, which is not only harrowing, but grounds Jill to the main conflict in a way the original never did. The cracks are much more filled in here from a narrative standpoint, alongside of a sassier Carlos who plays a more direct role. Speaking of those drastic changes, I’d say this is the most divergent Resident Evil remake by a country mile. Locales are utterly changed on top of the aforementioned story beats, with more clear tie-ins to the Resident Evil 2 remake. Entire sections of the original RE3 are excised, as are the choose-your-own-adventure “live selection” cinematics I cherished so much.

Playing through the remake, I was consistently torn. Some sections are better and have more personality, but the flow feels more linear. The Resident Evil 2 remake did a great job of keeping that classic franchise feel going with its heavy-puzzle focus and the giant police station that served as a grounded and varied RPG dungeon, but RE3 frequently jumps from place to place in a chapter-like format. But then it keeps coming back from the brink, in part due to the power of the engine.

The character models and aesthetics look fantastic, and add to the sense of dread you feel as you fight through the city piece by piece; I just wish there were a few more locations to enjoy it all with. To accomplish all of this, a few things have been stripped away from the original in the process. Multiple endings are out (understandable), as is the Mercenaries mini-game (less understandable as the progenitor-Mercs modes were in the RE2 remake) and the aforementioned time-stopping event choices. 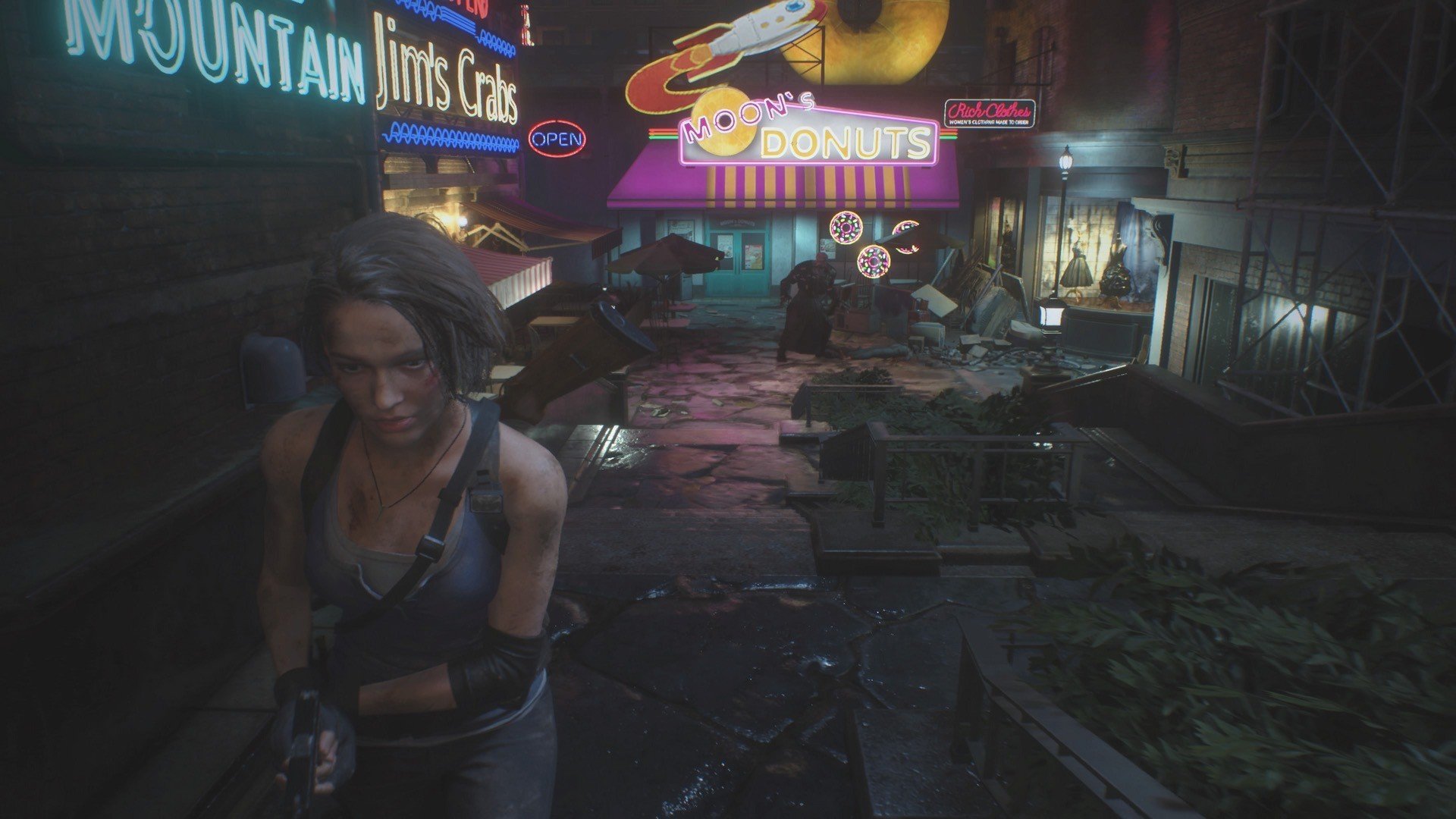 Resistance, an asymmetrical (survivors versus mastermind) multiplayer-focused mode, is included to sort of make up for a few of those pivots. We have an entirely separate article dealing with that, but having played a bit I will say this: I kind of wish we just got more Resident Evil 3, as it lacks a strong postgame currently.

For reference, I beat Resident Evil 3 twice for this review. My first playthrough was roughly six hours, and there’s an “under two hour” challenge: just to give you an idea of how quickly you can run through it if you put your mind to it. Once you’re done, you can unlock “shop” items with challenge points like extra items and weapons, and there’s also a reward for beating the game on veteran (hard) mode. There’s no immediate satisfaction like Resident Evil 2 provided with back-to-back Claire and Leon runs.

The remake of Resident Evil 3 is going to be divisive, just as the original was. While the action enhancements help the game mechanically (to the point where I wouldn’t mind seeing them in other remakes), the stripped-down focus and removal of some of the original’s weirder experiments hurt it. That all said, I’m still up for a yearly playthrough of both the original and the remake.

[This review is based on a retail build of the game provided by the publisher. It covers the single-player portion of the game. Resistance is covered in a separate article.]