‘We’re supposed to be f**king professionals!’

Way back in ’93 or ’94, I saw a pirated version of Reservoir Dogs and fell in love. My mum, not knowing what it was about, bought me a legit copy for my birthday and I screened it for my friends at the party. Needless to say, they were unimpressed, bored to tears by the lack of action. I remember having to fast forward to the end, annoyed that they didn’t get it and that the thrills were found in the endlessly quotable dialogue.

Reservoir Dogs was never meant to be an action movie, but boy, do people try to make it that way for the sake of a quick buck. It’s mainly due to those fleeting flashbacks of Mr. Pink being chased down the street and Mr. White dual wielding his handguns. Bloody Days is not the first time someone missed the point, as some might remember the misguided 2006 game, but I really hope it’s the last. 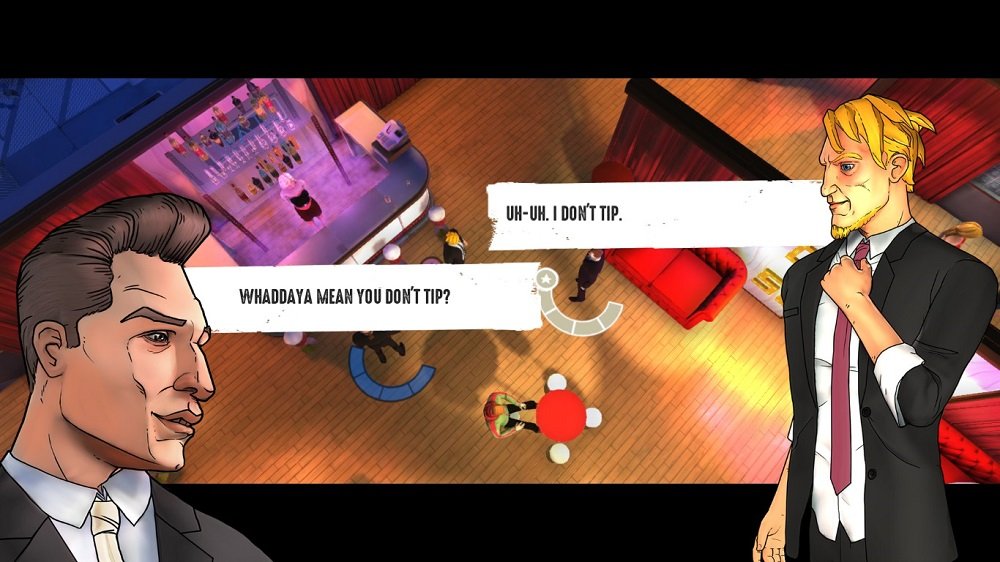 Bloody Days is merely Reservoir Dogs in name only; a loose interpretation, from character names to a handful of locations mentioned in the film, and even the beige Camaro used as a getaway car makes an appearance. The gang go on a series of botched heists, and that’s it, really. Dialogue is lifted wholesale from the movie and displaced into random scenes at random times. Though, you can always tell when it’s Quentin Tarantino’s script and when it’s the developers’ bargain bin attempts at screenwriting.

Everything is out of context, unvoiced, and cheap to look at. The character artwork is frankly dreadful, the kind you see on a flash game. They’re supposed to be inspired by the characteristics of each criminal, but they’re just ugly cartoons taken to the extreme. Understandably, they look that way to stand out during the chaotic gameplay, but the heists are so graphically bland and dated, you won’t ever notice or care who you’re playing as.

To make matters worse, the music is far removed from K-Billy’s Super Sounds of the Seventies. There’s this generic, twangy twaddle that makes you wonder if the devs got themselves confused with Pulp Fiction‘s snappier soundtrack, but still managed to screw up what they misheard, anyway.

As a game, it’s highly repetitive. You go to a heist, shoot up a bunch of people, get the loot, and escape, usually while shooting more people. The mission structure rarely changes, as the emphasis on combo kills ties it all down to an endless shootbang of braindead AI. While you’re here, please enjoy this visual example of me goading a whole army around the corner and killing them all with a pipe.

Bloody Days is a servicable twitch shooter at times, where the player desperately scrambles around for a dropped weapon as theirs run dry. It’s not quite refined as Hotline Miami, but when the enemies are better placed and there are fewer ways to exploit them, it does have some moments of tension. Ultimately, the heisters can’t survive on their own and this where Bloody Days‘ Time-Rewind System comes into play. 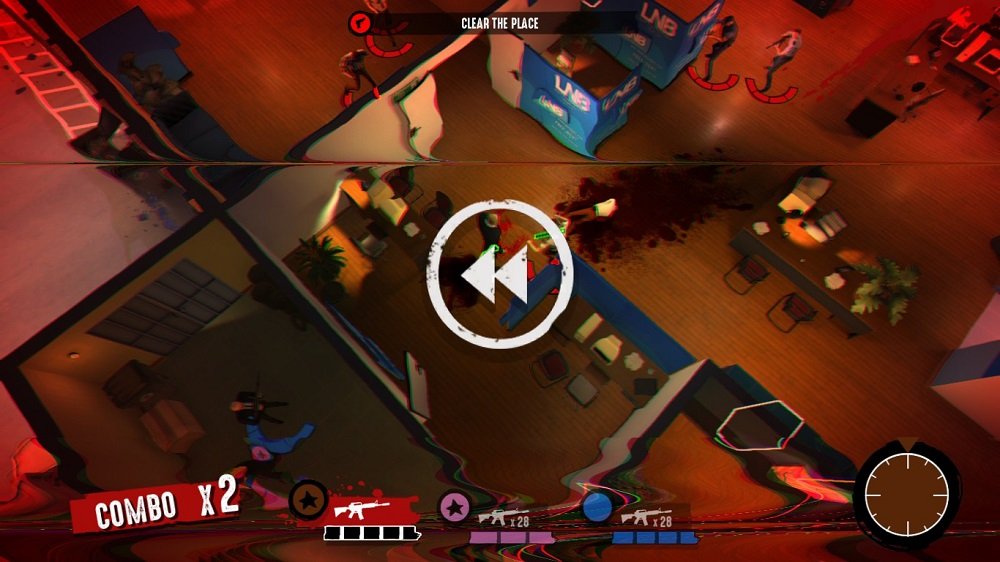 Time-Rewind sounds complicated, but it’s pretty easy to master. The leader of the group creates time for everyone simply by moving around. If they’re close to death or they run out of ammo, you can click a button and rewind back to the last moment the mechanic was used. So then it’s up to the second character to help out in that alloted time, ghosting the player’s previous moves.

It’s best described as trying to beat your previous best, only you change history in the process. It should be fun, but it ends up being annoying, confusing and repetitive. Since there’s no team AI, the the second (or third) character is unresponsive until you rewind time, so you’re basically having to add layers to the same shootout again and again. But sometimes, getting the perfect run means tripping over your previous actions. Your enemies can deviate paths and come after the second player, but the leader will carry on with pre-recorded moves. 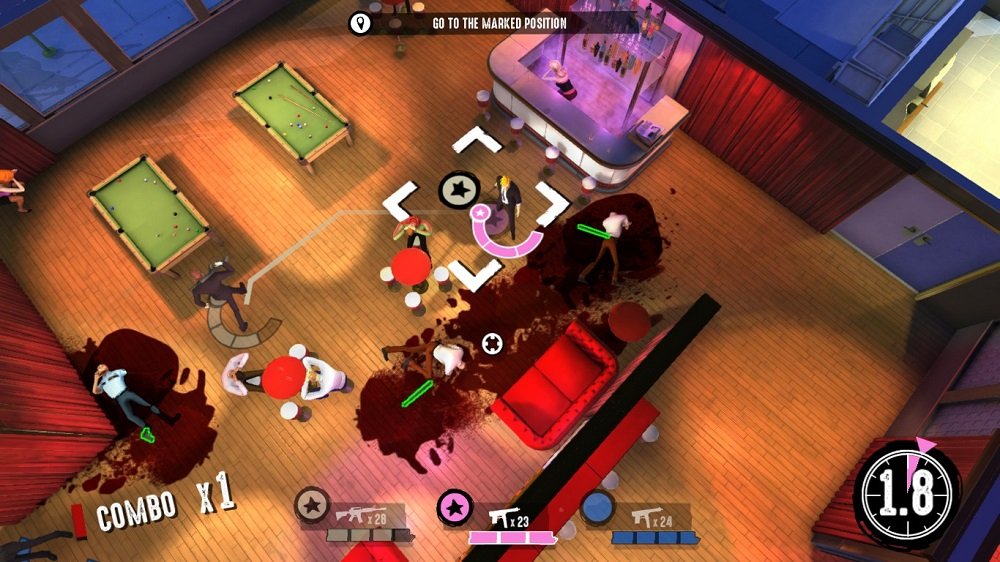 All in all, it creates a lot of headaches, as pre-rec characters will continue their run, wasting ammo at enemies no longer there. Getting too cocky and jumping ahead usually means the second character ruins an already decent run. The idea sounds great on paper, and maybe even better if there was team AI, but having to babysit 2-3 characters is a real pain. And of course, the more time rewinds and characters there are, the more confusing it gets. Considering this is the game’s USP, it’s rarely enjoyable in practice, only during small scale situations.

Bloody Days also has its fair share of game breaking bugs, with my “favourite” recurring one being a screen freeze while the action somehow carried on. There are times when enemies get trapped behind doors in cutscenes, meaning that when the objective is to clear out a room, you can’t because they’ve been boxed off. There was even one hard crash that almost killed my computer. Charming, that was. 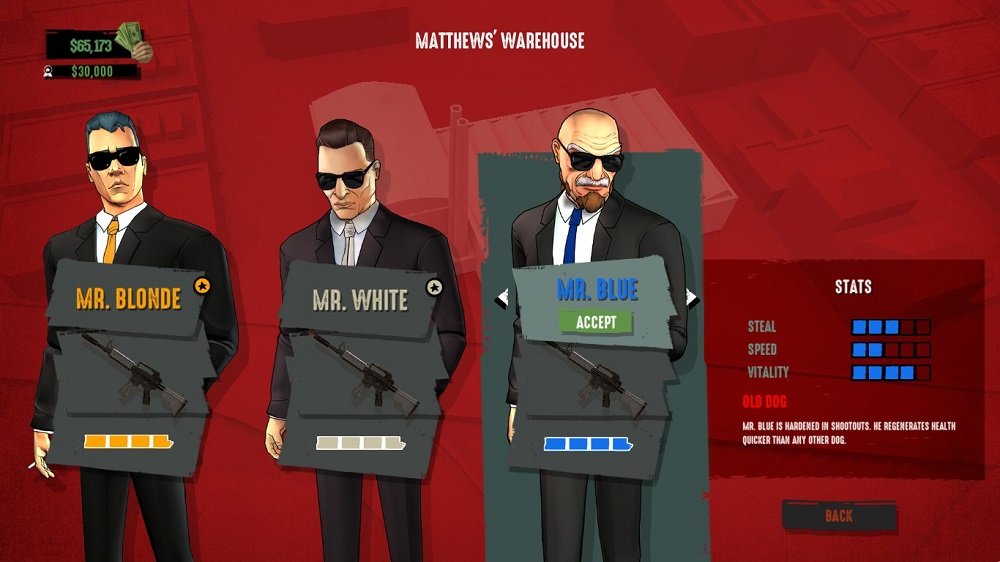 Seriously, there are plenty of licensed games out there that are faithful to the source material and you’ll usually find me championing the better ones. Thinking back to the 2006 attempt, as shallow as it was, it had an interesting hostage taking mechanic suitably in-line with the movie’s flashbacks. Bloody Days, on the other hand, comes across a cheaply purchased IP grafted onto some prototype because someone thought brand recognition could net them more sales. Yes, it’s that cynical to play.

Even if it wasn’t a gross misuse of a license, Reservoir Dogs: Bloody Days is a boring, buggy game with a universal selling point that’s nowhere as fun, or as smart, as it thinks it is. And just like Joe Cabot, I’m so goddamn mad hollering at you guys, I can hardly talk.