Realism in videogames is a tricky thing, especially when it comes to first-person shooters. Sure, regenerating health makes no sense, but it’s still a pretty decent and cherished game mechanic when used properly. In fact, when considering a “realistic” FPS game, it hardly seems like any of it would be entertaining in the least.

Mainly, reloading would take work, getting shot once might mean death, and aiming would probably be a pain in the ass. Created in only seven days, Receiver does all of these things and the result is one of the most satisfying FPS experiences I’ve ever had. 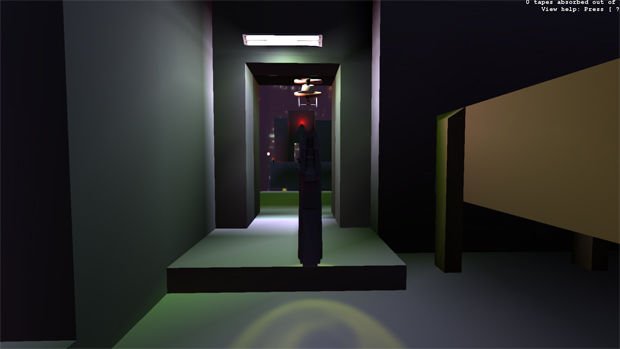 The plot of Receiver unfolds in a rather nontraditional manner. There are eleven cassette tapes scattered across the map, and each one elaborates on the plot. The thing is, since it is very easy to die in Receiver and the level is randomly generated each time, there is no set order to these cassette tapes.

What ends up happening is the player will be able to piece together the backstory of this strange cyber-punk world over various playthroughs, instead of in one amazing run. The tapes talk about what a “Receiver” is, how the enemy turrets function, and one acts as a really cool contextualized tutorial for playing the game. Let’s hope you find that one early on!

Expect to die a lot in Receiver, since a single bullet will cause a game over and end the playthrough. There is no saving, either; the player will start from the beginning each time. Enemies come in only two types: stationary turrets and flying taser robots. These flying taser robots are jerks, by the way. Both enemy types can be taken out with a single well-placed bullet, but it is up to the player to know exactly where to aim, and even then it will take some skill to nail the execution.

The game ends once all eleven tapes are collected in a single run, but good luck with that. It will take a significant amount of dedication and practice just to survive for any amount of time, let alone long enough to find every cassette tape.

When first starting a run in Receiver, all that is guaranteed is that you will have one of three pistols and some ammo. If you are lucky, you will also start with a flashlight, but if not it will be up to you to find one around the map. The flashlight can run out of batteries, but chances are death will come before that happens.

The three pistols — specifically, a Smith & Wesson Revolver, a Colt 1911, and a Glock 17 –control completely differently from one other and it is incredibly important to know how to use each and every one. Each pistol has a rather complicated reloading system in place; simply pressing the R key will not suffice.

In order to reload the revolver, press the E key to remove the chamber, then press and hold the V key in order to get the bullet casings out of the chamber. Oh, but sometimes firing a bullet can cause the casing to expand, in which case tapping the V key a few times to shake it out is necessary. Once the casings are out, pressing the Z key will insert a bullet, so pressing it six times will insert six new bullets. Finally, pressing the R key puts the chamber back, now with bullets ready to fire. Spinning the mouse wheel will spin the chamber, but it doesn’t have much practical use.

By the way, the revolver is the easiest gun to reload.

Successfully reloading a gun for the first time through sheer muscle memory is easily one of the greatest feelings in gaming. It also adds a lot of pressure to already stressful situations, since reloading with your back against the wall and a flying taser jerk robot in your face isn’t exactly easy. 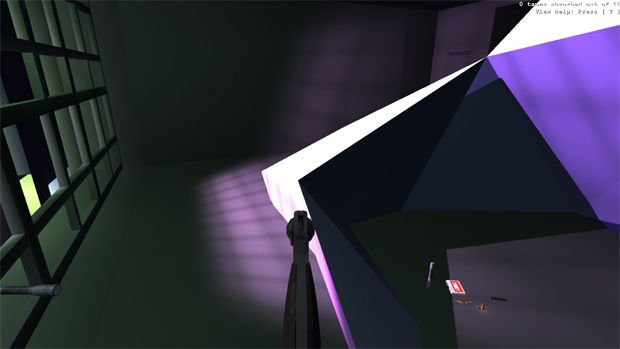 The moment I knew this game was something special lasted about 10 seconds, but it felt more like an eternity. As I peeked my head out of a doorway into an open area, I heard the *beep* that each robot emits as it detects you, immediately sending me into a frightened state. I kept my cool though, aimed my gun at the flying robot, and pulled the trigger.

Oh god, I had forgotten to check the barrel of my revolver to make sure I had more bullets. I hadn’t been counting my shots, and it was biting me in the butt. My calm-ish demeanor quickly turned into full-on panic. As I turned and ran in the other direction by rapidly tapping the W key, I shook out the chamber, emptied the casings (with no problems, luckily), and quickly mashed the Z key to put in new bullets. Pushing the chamber back, I turned around and put one single bullet in that flying hunk of metal, putting it down for good. 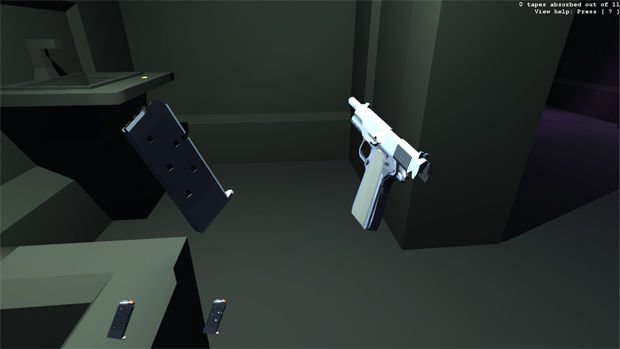 It can seem overwhelming just to reload a pistol, but the game includes a controls overlay which displays all possible actions for the currently held pistol. It even has a bit of AI to highlight which keys are usable from the state the pistol is currently in. Using the revolver as the example again, once the chamber is out, the controls overlay will highlight the actions possible now that the chamber is out, like pressing the Z key to put more bullets into the chamber.

As previously mentioned, the map is randomly generated each time, so layout memorization won’t get you far in Receiver. A lot of the pieces of the map will be seen over and over again, though; they will just be in different locations. It does get a bit tiresome seeing the same locations reused again and again during various attempts, so more room types would definitely add a lot to the feel of the environment.

There are also a few areas of the map that aren’t quite as polished as they should be. It is possible to get stuck under certain staircases, and some staircases require jumping in order to get over the top step. Falling too far will also result in death, but sometimes “too far” isn’t very far at all and seems a bit odd. I’d recommend always taking the stairs, even with their faults, just to be safe. 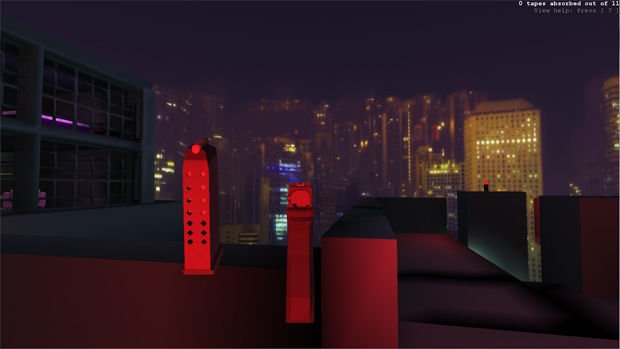 The game has a simple art style, utilizing low-polygon models and single-color textures for just about everything. It by no means looks bad, and in fact the sort-of-bland aesthetic adds a lot to the tone of the game. The lighting is the real star of the visuals, as some areas are pitch black and require a flashlight to navigate, while others are lit up in various colors from surrounding lights. It looks a bit rough, sure, but it is hardly noticeable during the heat of the action.

The sound, like the gameplay, is authentic and satisfying. A player’s ears are possibly the greatest asset they have in Receiver. Both enemy types emit a beep once they detect the player, so peeking into a new room and hearing a beep will do two things for the player: tell them to back the hell up while simultaneously instilling fear deep into their heart.

I do wish there was more to see in the game, though. The two enemy types, while individually challenging and distinct from each other, don’t exactly qualify as the best variety. The game would greatly benefit from having more types of enemies as well as some more room types. But hey, it’s a $5 game made in a week, so I’ll cut Wolfire some slack. 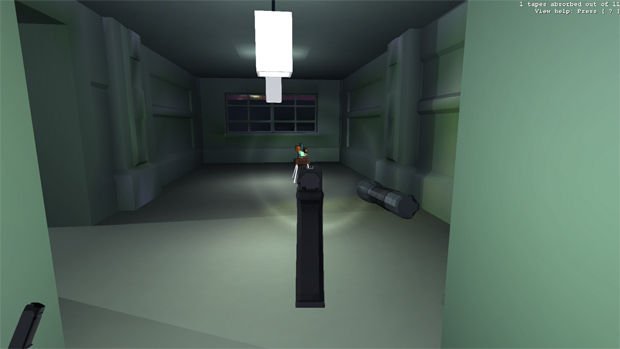 Just like the skate. and Monster Hunter franchises, Receiver focuses on the player’s mastery of the game’s unique mechanics. It will take some time and dedication to truly “master” the game, especially considering that each pistol demands the player to spend a lot of time with it just to understand how to reload the damn thing.

By the same token, Receiver is one of those games that feels so incredibly satisfying once it is finally understood and everything clicks. Then you remember that a group of talented people made it in a week and you question what exactly you’re doing with your life.