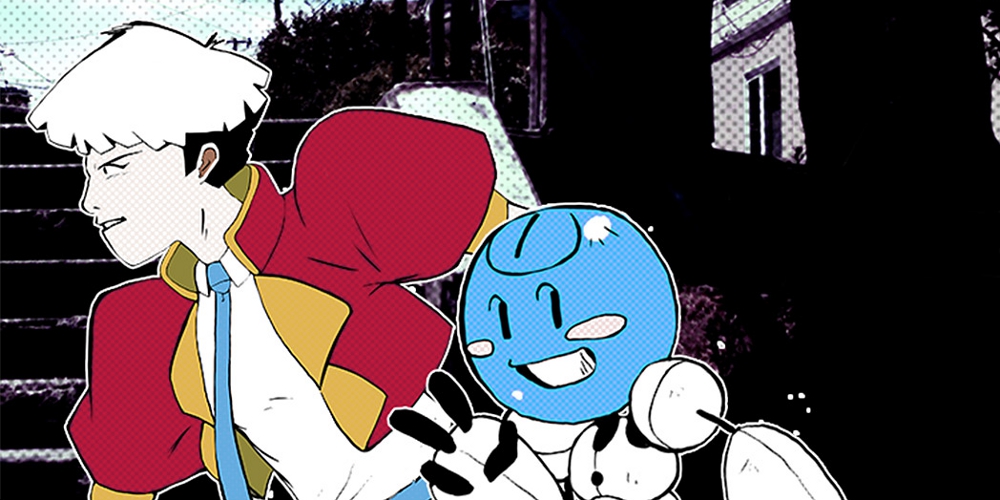 MidBoss, the team behind the LGBT-centric gaming convention, GaymerX, has been having quite a successful time lately. After reaching its Kickstarter funding goals at the end of 2013, the team has been hard at work creating its very first game, Read Only Memories, the first major LGBT adventure game of such a large scope and budget.

Touted as a queer cyberpunk point-and-click adventure taking inspiration from Snatcher, Read Only Memories boasts a sleek pixel art style and an excellent chiptune soundtrack provided by hip-hop composer 2 Mello. The idea was pitched as a way to introduce more queer and diverse characters into the gaming landscape, and while the game does indeed contain a fair amount of diversity, the story tends to revolve more around general themes of crime and technology, making it inclusive and accessible to just about everyone.

The story of Read Only Memories begins with the appearance of a peculiar robot named Turing, who breaks into the player character’s apartment after their creator, Hayden, was mysteriously kidnapped. Turing decides that the player character, who is a journalist and a friend of Hayden’s, is the most statistically likely to be able to help them. Thus begins the search for Hayden in the technologically advanced, cyberpunk-inspired city of Neo-San Francisco in 2064.

In this futuristic setting, scientists have discovered many new ways of enhancing the human body through cybernetics as well as genetic modification, meaning it’s common to see people with robotic limbs, blue skin, rabbit ears, and other such bizarre enhancements walking around as if it’s completely normal. Not to mention the ROMs, robots like Turing, which are just as commonplace and are on the verge of becoming sapient, able to think and feel as humans do. As expected, anti-hybrid and -cybernetic groups such as the Human Revolution have begun to pop up warning people of the dangers of such technologies.

During the player’s search for Hayden, they will meet a colorful cast of strange and interesting characters and be asked to participate in some rather shady activities, sneaking around the law in an attempt to learn secrets and uncover truths. Some characters can be trusted while other cannot, but they’re all able to provide leads, information, and other helpful things if the player can successfully persuade them.

The gameplay largely consists of your typical point-and-click adventure mechanics, nothing really new here but it works just fine. People and objects can be interacted with by looking, touching, talking, or using an item. Interacting with the same thing multiple times might yield different results, so sometimes it’s a good idea to look at, touch, or talk to someone or something more than once. There’s also a wide variety of items at the player’s disposal, which can be picked up and used in certain situations. There is no item combining to be done, however, and pixel hunting is not a problem since anything that can be interacted with will be highlighted by mousing over it, so many of the more annoying adventure game elements were left alone.

Much of the gameplay centers around conversations and choosing dialogue options, but there are plenty of puzzle-solving sections as well. These include direct puzzles, such as looking at a map and closing off intersections in order to divert a cab back to the player, as well as more indirect puzzles like trying to find the right item to gain access to a house or figuring out how to coerce someone into giving up information. None of the puzzles are too obtuse, and some of them are rather forgiving if the player messes up at first.

The story features several branching paths and alternate endings, depending on how the player chooses to interact with characters and how successful they are at figuring out puzzles. It’s possible to befriend or make enemies with several of the characters, so try and decide who will be the most helpful and choose the appropriate responses. Breaking the law and causing mischief seem to be unavoidable, but how it’s done is up to the player.

As most of Read Only Memories involves reading text, I found the writing to be entertaining and engaging, if overly-technical at times. They did a great job of giving every character a thorough backstory, making each of them interesting and relatable with their own quirks and behaviors. I particularly enjoyed Turing’s fondness for painting and the player character’s strange obsession with plants. There were, however, a few groan-worthy references and an occasionally disappointing lack of variety in dialogue options.

Read Only Memories originally set out to do one thing: foster the inclusion of diverse characters, especially those of the LGBT persuasion. Thankfully, the end product is much more than just that. The characters’ sexualities and gender identities, which include plenty of gay and straight, trans- and cis-gendered individuals, are revealed in a natural way or left up to the player’s imagination. Meanwhile, we have a story built around mystery and intrigue, with topics of crime, technology, and politics taking the forefront of the discussion in the lives of these characters who just happen to be a certain way. Personally, I felt the LGBT themes were handled appropriately and naturally without being too heavy-handed, but I’m sure some will disagree with me.

I would recommend Read Only Memories to anyone who enjoys point-and-click adventure games, as it’s an excellent addition to the genre, borrowing many of its key elements while ditching some of the more obnoxious ones. It’s also a great choice for anyone who is looking for more diversity in their video games, as it does a wonderful job of promoting inclusion without making it the sole focus. Plus, there’s an awesome, adorable little robot friend to hang out with, and who doesn’t want that?