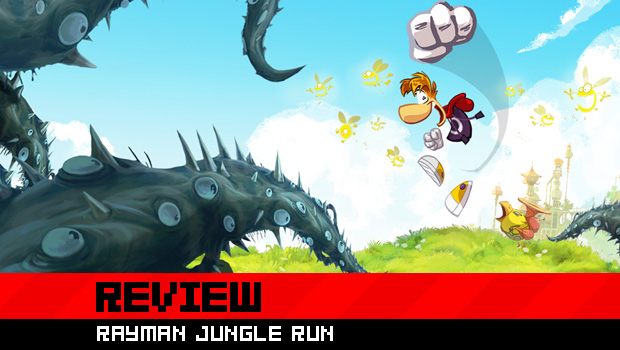 When did Ubisoft start becoming awesome again? Who would have thought the French studio would be the one to properly reinvigorate the 2D platforming genre, thus beating Nintendo at its own game? That’s how I felt when I first played Rayman Origins at last year’s E3 and then the Wii U sequel at this year’s.

When I saw the trailer for Rayman Jungle Run the other week, I was impressed by how fun and fluid it looked. I thought to myself, “If the limbless wonder was able to do so much good on home consoles, imagine what he could do on mobile devices!”

I’m beyond ecstatic to say that my early impressions were right on the money; Rayman Jungle Run is touchscreen platforming done oh so very, very right. 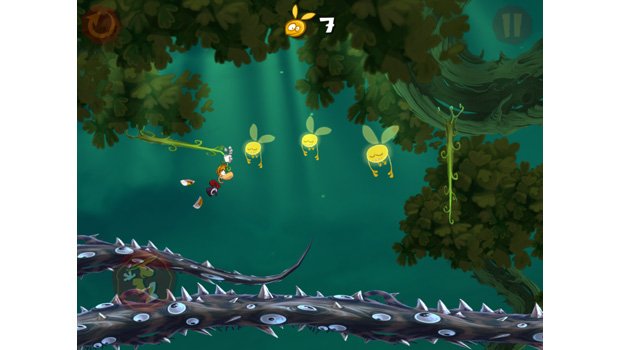 What is often the biggest shortcoming of any touch-based platformer? The controls, of course. The more virtual buttons a game tries to squeeze on the screen, the more likely the game will fail to register your inputs. Without tactile feedback, it’s hard to tell when you’re just outside the button’s input detection boundary until you tap the screen and nothing happens.

Jungle Run streamlines controls by taking a page out of auto-runners like Canabalt — Rayman is in constant motion, so all you have to worry about is dodging obstacles. Unlike Canabalt at its ilk, you aren’t running along an endless horizontal corridor, gunning for that elusive “high score.” This is a true blue platformer with chasms, spikes, enemies, floating platforms, wall jumps, and other hazards.

The game is split into four worlds with 10 stages apiece. Each world introduces a new ability, giving you plenty of time to grow accustomed to a particular mechanic before the next one appears. In the first world, all you have to do is jump. Though there is a jump button in the bottom left corner, you can trigger the action by tapping anywhere on the screen, save for the top corners which are dedicated to the “restart level” and menu commands.

In the second world, you gain the hover ability, executed by holding your finger on the screen once you are airborne, which you can also use to catch air currents to lift you higher. In the third world, you are introduced to wall running, which offers some clever gravity-defying challenges. In the final world, you learn how to punch through wooden barricades and enemies along your path. Punching is mapped to a separate button in the bottom right corner which, unlike the jump button, has to be pressed, but at least it’s large enough that you’ll never accidentally miss a punch.

Reaching the end of a stage is not all that difficult, but your true goal is to collect Lums, the golden firefly-like critters found in every Rayman game. There are 100 Lums in each level, and finding them all will require you to take more precarious paths, intentionally miss jumps, or discover a hidden doors. By collecting all the Lums in at least five stages in a world, you’ll unlock that world’s tenth stage, a balls-hard run through the Land of the Livid Dead. Here, there are no Lums, only an increased risk of sudden death. Thankfully, as with all the other levels in the game, these are a minute in length tops, so there’s never that sense of lost progress should you want to restart a stage.

The icing on the cake is the art, which has been pulled directly from Rayman Origins. Normally, I would call out a developer for reusing copious amounts of assets, but the graphics from Origins are so colorful, bright, and beautiful that I have no objections about their reappearance here. This is a game you play with a smile plastered across your face, nodding your head along to the cheerful music and detailed animations. 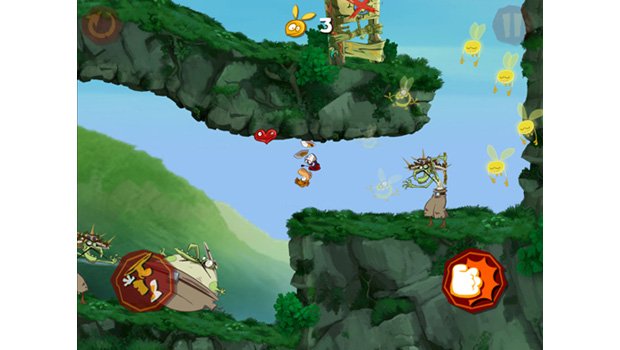 Unfortunately, the game ends full-stop upon completion of the final stage. There is no fanfare, no “congratulations” screen, just a boot back to the main menu. Feels rather abrupt, but I don’t know why I was expecting anything else. Jungle Run is just a series of narrative-less challenge levels, but it’s so fulfilling that at times you’ll become confused into thinking it’s something “greater,” if that makes any sense. Not really a bad “problem” to have.

That’s not to say Jungle Run doesn’t offer rewards for the dedicated player. The more Lums you collect, the more wallpaper you earn, which can be saved as the background image on whatever device you are using. It’s not much, but how often does a game award prizes outside of the game itself? The challenges are reward enough on their own, so these are but pleasant extras.

Rayman Jungle Run is proof that platformers can work on touch devices if you tailor the them to the strengths of the hardware rather than attempt to recreate a console experience. Had this merely been a watered-down port of Origins, it would have invited direct comparisons and highlighted the flaws of touch-based gameplay. Instead, it’s a game with bite-sized levels and sensible controls yet all the action of its console brethren. This is what companion software ought to be.