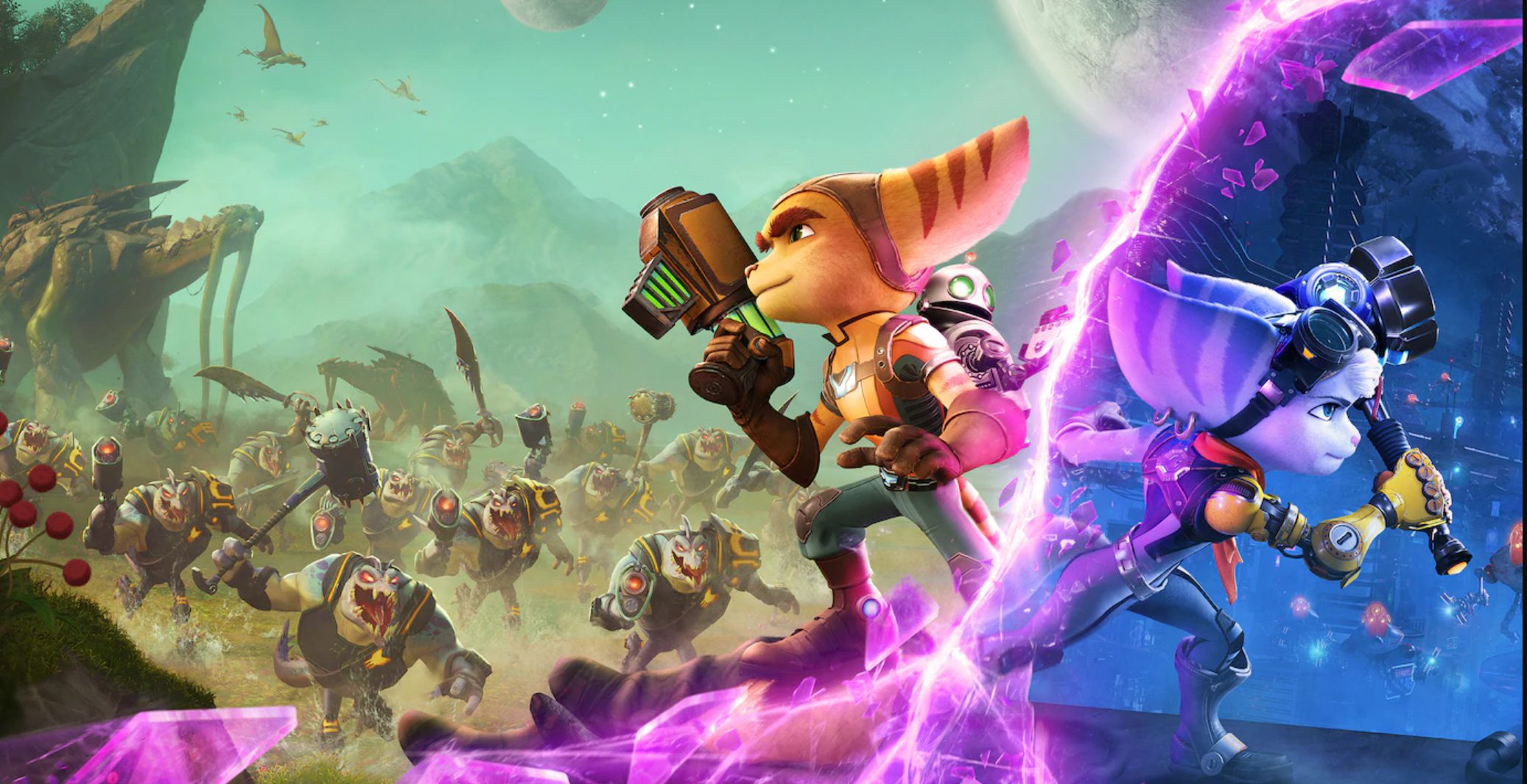 We’re finally at the point in history where we can say PS5 games are coming out. We had Demon’s Souls, sure, but with Returnal still fresh and Ratchet & Clank: Rift Apart here (well, nearly here for all of y’all), it feels more real.

Especially so after actually experiencing the latter. 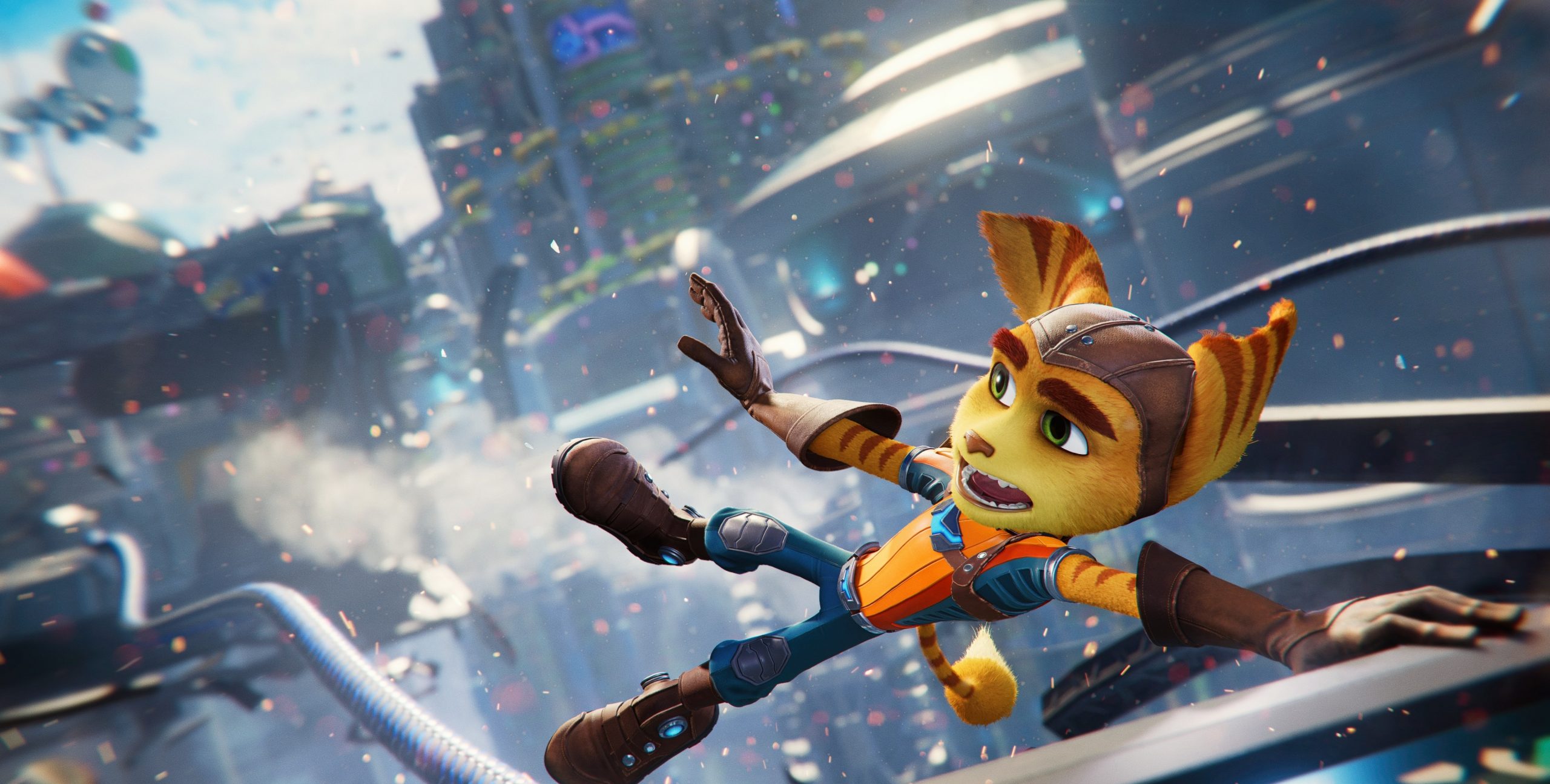 It feels like it’s been forever since the last Ratchet & Clank, and it kind of has! I mean we used to get one of these things every year or two give or take, then we saw a stark drop in releases around 2013: at which point we’ve only seen two R&C titles. Now there’s another one! And it lives up to the legacy of the series.

It is immediately apparent how gorgeous this world is. As a colleague of mine has said, we’re at the point of “Playable Pixar.” I mean, just look at the fur in the screenshot above! It looks even better in motion. This is a noticeably new-looking game, and the spirited performances of the cast set it apart from a lot of similar mascot platformers. The MCU-quality soundtrack is the final ingredient to this cinematic soup. Given that this is a ground-up PS5 game, there are basically no loads, and the DualSense rumbles so hard it practically slaps you in the face.

It’s also nice to get full HUD control. There’s accessibility options that include common courtesy quality-of-life upgrades like camera sensitivity, a screen-shake toggle, and plenty of visual tweaks. You can even customize shaders for enemy types for color blindness. I had one classic “PS5 game” crash, but other than that, it was smooth sailing. For reference, fidelity mode, which you’ll see in this video here, was the only option available to us. Performance mode is coming via a day one patch, but the performance was just fine on the former.

Ratchet & Clank: Rift Apart itself is extremely clever in how it sets up the narrative framework. Insomniac knows there’s going to be a lot of newcomers here, so the tutorial intro doubles as a “parade float” recap; where an announcer will explain Ratchet and Clank’s former exploits in a quick and digestive manner. Naturally, things go south very quickly, Doctor Nefarious gets involved, and oh snap we’re in a multiverse hellscape.

To wit, Insomniac has taken this approach to play with the lore a little bit. The time has come for Ratchet to meet another one of his kind, and we get just that with newcomer Rivet. There are alternate reality tropes galore, including returning characters that aren’t quite the same as they were before, and it’s a riot for long-term fans. Of course, you do get some quick exposition so you aren’t completely lost if you come in blind. We also get some deep cuts and plenty of audio logs. Two words: Lombax lore.

Ratchet also ramps up the mechanical elements too. My absolute favorite thing about Rift Apart is how it incentivizes leveling individual weapons. The upgrade trees are just big enough to the point where it doesn’t get cumbersome, and the perks are just good enough where you can feel the difference after plopping points into them. The team as a whole did a good job making weapons diverse and useful, to avoid the common trope of just min-maxing your favorite (or the cookie-cutter effective gun).

Combat is also pretty interactive due to the “phantom dash” that allows ground and aerial movement, which is secured fairly early on, and the ability to pull into rifts scattered around the battlefield. It leads to some predictable skirmish arenas where you can’t leave until you’ve vanquished “x” amount of foes, but between yanking on portals and dashing around, the action is extremely mobile. If you’re an action-platformer vet, you’ll probably want to jack up the difficulty one notch above the default.

So as you may have intimated from the arena comment, there is a bit of fatigue that sets in periodically. Rivet is a fun character (voiced by the always-professional Jennifer Hale), but she basically is just a mirror image of Ratchet, and even duplicates his exact loadout. (There’s an in-universe explanation for this, but it’s a bit awkward.) Samey minibosses are a bigger problem, as you’ll square off against the same version of “giant robot that slams and has a rocket launcher” many, many times. Thankfully the pacing is on-point and these sections, while too frequent, are easy to power through. At its core, it still has the same arcadey “hit crates, get big swirly shinies” aspect, too.

To that end, the Clank puzzles are great palate cleansers. As a sort of mix between Portal and Lemmings, you’ll take control of your little robot buddy in an attempt to mend some of the rifts on the fritz. They’re short, and sweet — a common theme for Rift Apart, which tries not to overstay its welcome. The Mario Sunshine-like challenge rifts that Ratchet and Rivet can partake in are very similarly satisfying, as is the optional battle arena minigame. The strong platforming system holds it all together like glue.

Beyond all that, there’s plenty of optional sidequests to embark upon, and Insomniac brings back the helpful Spider-Man method of just telling you where nearly every collectible is on the map. It saves a ton of wasted time while allowing for some surprises, and it’s much appreciated. The main story, with some exploring, will take most people around eight hours (some will do it in less). After all is said and done, there’s a “challenge mode” that gives you more bolts in exchange for a tougher playthrough, functionally serving as a New Game+ option.

Ratchet & Clank: Rift Apart isn’t afraid to revel in its mascot-platformer roots, but it manages to knock so many of its competitors completely out of the water. The secret sauce? Insomniac knows that a strong presentation goes a long way, and they’ve stretched this formula about as far as it can go with plenty of customization and a compelling world to play around in. While it’s uneven at times, it’ll suck you into the universe of Ratchet & Clank all over again.