Everybody’s jumping on the co-op bandwagon these days. Be it to fill an imaginary checklist that demands that all games need some sort of multiplayer component or simply to justify the inclusion of an online pass, you can’t move without seeing yet another single-player title that has re-tooled its entire structure to make way for multiple players.

Ratchet & Clank: All 4 One jumps into this new trend by teaming Ratchet, Clank, Captain Qwark, and their nemesis Dr. Nefarious together on an all new adventure. However, there’s something to be said for sticking to what you know. 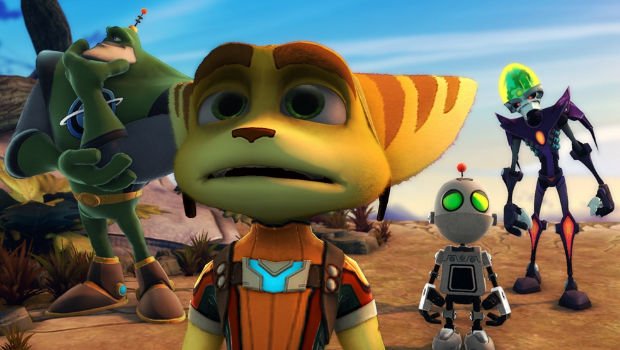 While previous Ratchet & Clank games have been single-player affairs, All 4 One is designed entirely around four-player co-op. The contrived story sees our heroes and villain trapped together on an alien world, facing a bigger threat than Nefarious himself has ever posed. They need to rescue a world overseen by a mysterious threat, deal with an embarrassing GLaDOS rip-off, and maybe learn a thing or two about friendship along the way. With that paper-thin plot established, things are set for a surprisingly long list of levels in which the four unlikely allies must shoot incessant waves of enemy robots and take part in simple co-op “puzzles” to progress through each stage.

All 4 One shares much more in common with top-down arcade shooters than the third-person action found in past installments. The camera is pulled back and slanted, allowing all four characters to appear at the same time. This is where All 4 One‘s first big problem lies — the camera is awful. It creates invisible boundaries during platforming sections, so that what may look like a clear jump will actually cause characters to fall to their deaths if a party member is lagging behind. This issue is doubled thanks to the fixed camera positions, making many platforms appear closer than they are while obscuring a number of death-drops. With nearly every level in the game surrounded by chasms, death by pitfall is farcically common, and it’s nearly always the fault of the camera. 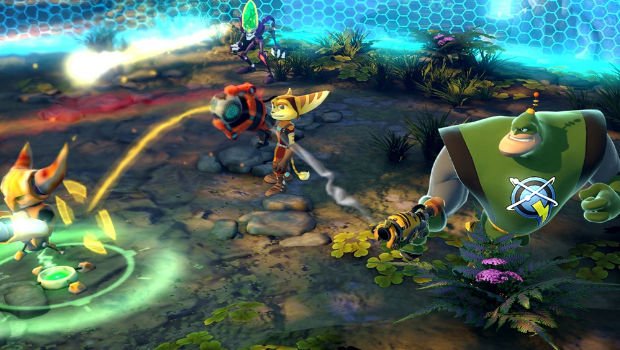 The gameplay itself is a rather brainless bit of run n’ gun action. Many of the more unique weapons of the Ratchet & Clank series aren’t present, and although there are a few interesting guns — such as one that turns enemies into giant boars — most of them are fairly common items, such as rocket launchers and electricity cannons. Weapons can be upgraded thrice, although some of them are borderline useless thanks to their short range and inability to target efficiently. The ammo count is also low for each gun, which is a real pain when the game drops players into arenas full of enemies without an ammo pad on which to restock. In one encounter, we had nothing but short-ranged weapons left against an enemy that was out of range. The game does not account for these moments.

Outside of shooting, there are various co-op puzzles to conquer, although they’re incredibly shallow and repetitive. They mostly consist of using the Vac-U to suck up objects or players and shoot them onto switches or across chasms. The Hookshot also returns, and players will need to latch onto each other as well as onto grapple points to cross wide gaps. Puzzles scale according to how many players are sharing a game — requiring all four characters in a full game and less for incomplete teams. In single-player, the main character is helped along by a CPU-controlled Clank, who is pretty efficient at completing co-op activities but prone to jumping down holes or standing in front of enemy fire in any other situation.

Although it’s a cooperative title, the game includes a light competitive element. Players are graded on how many bolts they discover throughout a level, how many indigenous animals they suck up with their Vac-U, how many enemies they defeat, and how many co-op actions they perform. This makes the action a little more compelling, although bragging rights are the only real reward. 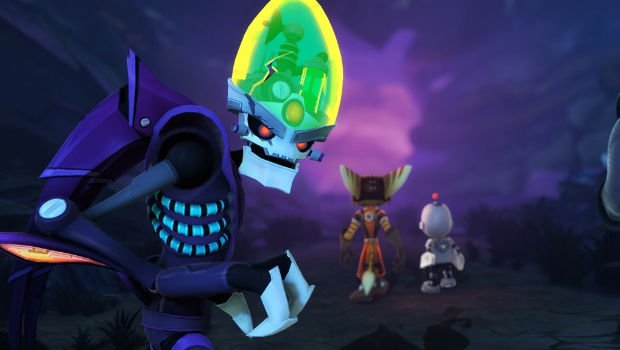 At its best, Ratchet & Clank: All 4 One feels more like a smaller digital game than a full retail one, despite its length. The wide camera and shallow gameplay gives it a vapid arcade atmosphere, and the fact that the gameplay is so messy, throwing endless robots at players and overloading the screen with visual garbage, makes for a title that feels far too loose and sloppy to constitute a full-priced game.

Furthermore, it is very poorly structured. Each chapter is broken into stages, but only certain stages serve as real checkpoints. If you get to the end of a stage and quit, there’s always a chance you’ll be thrown back a stage and lose up to 20 minutes of progress. This is made worse by the fact that cutscenes are unskippable, as are end-of-stage result screens, meaning you have to sit through the same content over and over again.

Endless repetition seems to be a theme in All 4 One, evidenced by the tiny selection of stock phrases that the characters spout to a nauseating degree. I didn’t think anything could make me hate Dr. Nefarious, who stands among my favorite videogame villains, but hearing him say, “A few billion bolts more and I’ll have a new space station,” for the fiftieth time definitely did it. He even squeezed the line out in the two seconds before the final boss was beaten and the ending cutscene played. I now exclusively associate Nefarious with skin-crawling irritation, and I hate that All 4 One ruined him for me. 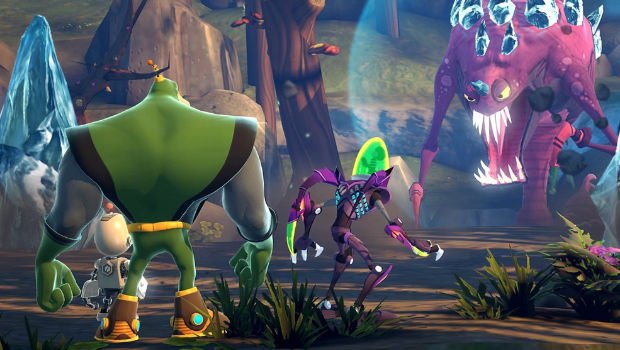 The multiplayer has been shoddily implemented as well. There is no true drop-in/drop-out co-op, as the session has to reload the nearest checkpoint whenever somebody joins the game. Sometimes, it shunts the players forward and skips over a section of the game, and other times, it tosses them backwards and forces them to replay a section. Once, I had somebody join just after a lengthy cutscene finished, then the game booted us to a split-second before the unskippable cutscene activated and I had to watch it again. The new player dropped out before the cutscene had finished playing.

While the single-player game is noticeably less action-packed and more slow-paced, it’s shockingly preferable to co-op much of the time. Between having to reload for new players and a camera that’s unable to cope with four of them at once, the entire game can grind to a halt if just one person doesn’t know what he’s doing — there’s quite a few of them, considering the squadron of mouth-breathers I kept getting stuck with. If one player is unsure of how to use an item correctly or to help solve a puzzle, nobody can progress. It was not uncommon for me to be joined by somebody who was totally clueless, even after having stuff explained to them, effectively stopping the game. I also saw no way of booting them from the session, while quitting myself always presented the aforementioned risk of losing a chapter’s worth of progress.

You’ll also be pleased to know that All 4 One is rather glitchy. I’ve had multiple issues with the screen’s becoming a single solid color or with Hookshot grapple points’ causing characters to freeze. During the very last boss, the creatures I needed to beat to get to the next part of the fight stopped spawning, preventing the boss from appearring at all. 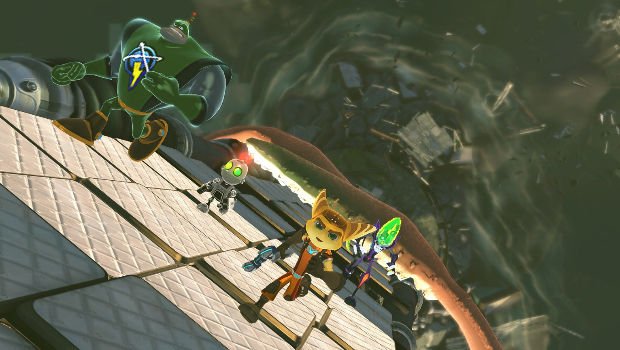 To be fair, the game is competent a lot of the time, but that’s as high as it ever climbs — a level of baseline competence that fails to excite. The only real entertainment comes from the cutscenes, which, while they should have been skippable, are at least genuinely amusing. Otherwise, you’re left with a rather bland shooter and even less flavorful, forced co-op action dragged out over the course of eight to ten hours. That’s a decent length for a game these days, but only if the game is a lot of fun. For a lukewarm arcade shooter that frequently frustrates with clueless design, it makes for something that long overstays its welcome.

Ratchet & Clank: All 4 One should have been about $15, five hours shorter, and released on the PlayStation Network. It’s a game that does a disservice to the high pedigree of the Ratchet & Clank series and takes too far a departure from what made such an excellent set of games. It’s sad to see these fantastic characters appear in a poorly structured, mediocre game, full of camera issues and silly bugs that add insult to injury. A very substandard outing for Ratchet and Clank, one that might be serviceable at a fraction of the price but which can be safely be ignored during a time when so many better products are vying for a gamers’ attention.