Imagine that you did something really stupid yesterday. Maybe you farted in front of a beautiful girl on the train. She smiled at you when she first saw you, but your rank emission turned that smile to a frown, and all was lost. She was probably into you, but now you’ll never know.

If your world was like that of DS RPG Radiant Historia, you’d be able to go back to a key decision point in your life and change things for the better. Let’s say that you warped back to the moment right before you let one. It could work out, or it could be that she sees your wincing face and knows that you’re holding one in. Or, you could warp back to earlier that morning, armed with the knowledge that a foot long chili dog wasn’t the best lunch idea.

Radiant Historia takes this ability of being able to bounce to key moments in time and makes a deep, enjoyable RPG.

I’m happy to say that Radiant Historia has nothing to do with gas passing. It follows a special military man named Stocke who lives in a world torn by war. This world also suffers from a widespread and mysterious development called “desertification,” which has all life crumbling into piles of sand. While everyone else is dealing with what looks to be the end of the world between these two issues, Stocke dutifully carries out his assigned missions. One day life becomes even more complicated as our hero comes in possession of the White Chronicle. This a powerful book that makes it possible for Stocke to travel between two timelines of history, taking pieces from each to make the best possible future for his own life and all the people of his world. It’s too bad that there’s someone out there with the Black Chronicle, trying to go against Stocke’s every move.

There’s never a dull moment in Radiant Historia. While other RPGs have you plowing through random encounters on a massive overworld map, this one keeps you busy over its entire play time, popping back and forth through time in an attempt to right every wrong. The game starts out gently with the time travel, making you go back to simply change a single decision to improve the future. But, as the game progresses, you’ll really have to put your thinking cap on to figure out how to proceed. I was worried early on that Radiant Historia would play out with multiple choice options to pick a branch in time. Early instances had you dying with one choice and living with another, which was a bit too choose-your-own-adventure for me. It turned out that these situations were merely time travel training wheels, and that some heavy duty time hopping was in store later.

Keeping track of the happenings of two lines of alternate history could be really confusing. Thankfully you’re aided by a menu option that gives you full timelines for both paths of history, with key decision points clearly marked, and ample reminder notation at each of them. By using the power of the White Chronicle, you’ll be able to visit the the special space in between time, called Historia. There you will be able to choose what point of time on these timelines you would like to go back to. Once selected, you’ll be whisked away to the past, where you’ll have to relive all of your previous actions. The only difference is that you have knowledge of what will happen in the future, and now you can try to change the course of time. To give any example would easily spoil the fun you’d have in making the decision for yourself. Just know that the team behind this game did a fantastic job of creating a deep, involving story

Even from early on it seems like the world is against Stocke. For this reason, you’ll be fighting in between time hopping sessions. Radiant Historia’s twist on turn-based RPG battles is fun enough that you won’t feel like these battles are a distraction to the time travel you’re supposed to be doing. Enemies appear on a 3 by 3 grid, and you’re free to attack any of the enemies as you would in a standard turn-based battle system at first. You learn quickly that three party members up against nine potential enemies is a bad situation to be in, and it’s in these situations that you’ll use the ability to push enemies around this grid with special skill attacks. For example, with the standard “push assault” skill, you could push an enemy in the row closest to your character back to the farthest, where another enemy stands. With them both in the same grid spot, the next consecutive attacking member of your party could attack the one spot to do damage to both enemies. As your characters level up, they’ll gain more pushing and pulling abilities to wrangle enemies for this purpose. Combine these abilities with ones that change your attacking order and you have a really fun attack chaining system that will have you mowing down baddies simply for the fun of it. In some of the later critical battles, placement and attack order are key, which brings this game’s battle system way out of boring button mash attack territory. 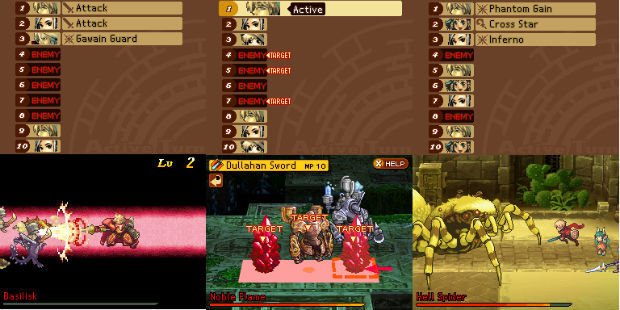 Radiant Historia has good looks to match the strong gameplay and story. The sprite-y background graphics and characters took me back to the 16 and early 32-bit JRPG days, The detailed art and character portraits had me thinking that this is one of the better looking DS RPGs. It also sounds great, thanks to composer Yoko Shimomura, who was also the composer of Parasite Eve and the Kingdom Hearts games, among many others. There’s a mysterious and beautiful theme that runs throughout her compositions for this game, which greatly compliments the story. This is just the next great soundtrack in her long list.

It’s apparent that the game’s creators went out of their way to make sure that potential time travel plot holes were covered. Once you get some 30 hours into the game and look back at the past in both timelines, you’ll see just how impressive this feat is. You can tell that care was taken to make sure that all the 200 plus scenes of history tie together nicely. That said, there were a few situations where I traveled back in time to a spot where I felt the appropriate history-changing interaction could happen, only to find that nothing changed. Scrolling through a bunch of dialogue that I had already seen only to find that no change was triggered was a bit frustrating. Sometimes the specific point in history required for a change is not clear, though it was never too difficult to find the correct point in the timeline. I just couldn’t shake that in each of these situations, my choice should have worked.

There were also a few instances where I felt like the game’s dialogue should have told me I was on the right track with my choice. As retreading history requires you to go through the dialogue again, you’d think that there would be some kind of marker that you are on the right track, especially in lengthy segments. Pressing the start button skips dialogue and scenes you’ve already seen, but it also skips new scenes in an updated history. The end result is your character standing in place, with you wondering what happened or what changed. Thankfully there were only a few of these situations.

Finally, while Radiant Historia does a nice job of dancing just outside the now tired JRPG tropes, one does rear its ugly head a few too many times. Be prepared for the whole boss-after-a-boss thing, multiple times. I’m pretty certain that no one falls for the scene where you thought you killed a boss only to find that it’s not quite dead, or is going to evolve into something stronger. We stopped falling for that in the 1990s, didn’t we? The creators of this game didn’t get that memo. There were a few instances that bordered on annoying with the bosses not dying. In one boss-after-a-boss instance toward the end I screamed “Are you serious?!” at my DS in public and embarrassed myself.

Don’t let these small issues discourage you from trying out this rich, developed time-travel RPG. There’s a lot of fun to be had here, and the story wraps up very nicely, making for a great reward for all of that time bouncing. It’s not often that we see a DS RPG with this level of creativity and polish in the story and gameplay departments, and the fantastic music and art only accentuate that. Even if you think you’ve done the time-travel RPG before, you should still definitely play Radiant Historia.