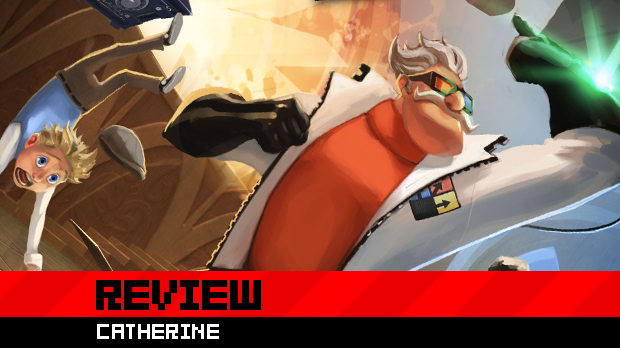 Quantum Conundrum is a wacky Portal-like puzzle game centered around a weird science contraption that switches dimensions. It’s whimsical, fun, well made, well written, it controls well, and it’s a blast to play. It’s almost flawless. The puzzles are made up of simple elements that are combined into complicated and elaborate puzzles.

It’s too good for a $15 downloadable title. I almost didn’t believe it when I looked at the price; I felt like I was playing a $50 game. I simply can’t recommend this game enough. In fact, you are an idiot if you don’t buy Quantum Conundrum.

Players take first-person control of a young child who comes to visit his scientist uncle at a crazy mansion. Upon arrival, the silent protagonist learns that his uncle is trapped in another dimension, and it’s up to him to save his relative. In order to do this, all three of the generators in the mansion will need to be restarted. Of course, it’s not as easy as walking up to a switch and pulling it. Every room is a brain-racking puzzle that at first might seem impossible, but once completed, feels stupidly obvious.

Puzzles are completed by moving around objects, which are mostly just boxes. Heavy weights are used to trigger pressure plates, boxes can be stacked to climb on, and there are a whole bunch of other unique solutions that are pleasing to discover.

The real puzzle mechanic is the dimension-shifting glove the player has. By switching dimensions, the entire world changes slightly. In the Fluffy dimension, everything is lighter. This allows heavy boxes to be moved, and objects can be blown around by fans and they’ll stick to walls. In the heavy dimension, light things become heavy. A cardboard box can hold down a pressure plate, and objects are laserproof. The Time dimension slows down time. This is my favorite one. It’s possible to toss an object into the air, and then run to the other side of the room to catch it. The last dimension, Gravity, reverses the gravity.

Each dimension is introduced slowly, and there are a few easy puzzles that teach you how to use the new mechanics. Then there are a few really challenging puzzles that will make you work to find the solution. Dimensional shifts happen fast and frequently, and they need to be combined to solve puzzles. By going into the Fluffy dimension, you can pick up a heavy box and throw it. As soon as it’s released from your hands, you can switch back to normal and the box will become heavy again. This is a good way to break glass that’s blocking your way.

It’s difficult to fully explain how all of these mechanics work. Physics are redefined in an insane way, but it makes sense inside the game. By the time I finished playing, jumping across slow-moving couches that moved through the air seemed like a perfectly normal thing to do.

One of the more complicated combinations is using Fluffy to toss an object, slowing down time so you can then climb onto the object, and then, by reversing the gravity, you’ll get up higher. It’s possible to float at a constant height if you keep flipping from reverse gravity to normal. You’ll also need to make the object heavy at points to block incoming laser attacks. It can get complicated, but as you play, you’ll pick these things up quickly. Although the puzzles can be quite challenging at times, the game is intuitive and does a great job of guiding you towards the right solution.

The whole time the player is running around the mansion solving puzzles, your uncle (voiced by John de Lancie, famous for playing Q on Star Trek) is on the intercom and he’s constantly talking to you. He advances the story — which is thin but sufficient and cute — tells you witty one-liners, and he gives you hints if you spend a while on a certain part of a puzzle. He gives the game a thick slice of character that makes it delightful to play. I think it’s impossible to play this without smiling at some point.

The closest game I can compare Quantum Conundrum to is Portal. This might have something to do with Kim Swift being the project lead. She used to work at Valve and left at some point while they were making Portal 2. Having a game be like Portal isn’t a bad thing, even though some people might even go so far as to call this a clone. Sure, I guess you could say that, but it’s still really good. If puzzle games with a witty narrator become a new genre, I’d be OK with that.

This game is amazing, and I would gladly pay forty bucks for it. It almost seems wrong to enjoy a $15 title this much. Quantum Conundrum has more polish and charm than most full-price retail releases, and it plays just as well. It took me about eight hours to get through the story once, and I could easily spend another eight with it. There are collectibles scattered around, there’s a leaderboard for each level so you can compete for best time and score, and you can get achievements by playing through all the levels and not dying. I don’t have anything bad to say except that I wish I had more of it to play.