In 2007 a game featuring inter-spatial portals and physics-based gameplay came out of nowhere. Only two hours long, it was a demo, proof of concept, an experience that created an unlikely pairing between the first-person shooter and puzzle game genres. And yet Valve’s Portal captivated the hearts and minds of millions.

Now, over four years later, it’s fascinating that in an industry that seems bound and determined to recreate the successes of others, first-person puzzle games are still something of a rarity. However, thanks to the Indie Fund, players yearning for another foray into this relatively unexplored sub-genre have something new to sink their teeth into with Toxic Games’ maiden release, Q.U.B.E. 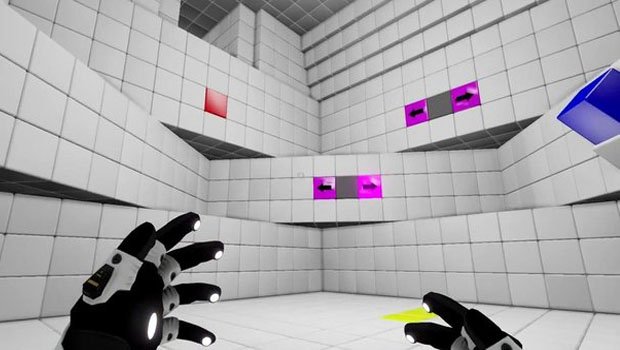 Q.U.B.E. (Quick Understanding of Block Extrusion) begins with the player awakening face-down in a cold, desolate room comprised of nothing other than white cubes. Given no directive, players will eventually come into contact with a variety of strategically placed colored blocks. Through the use of a pair of futuristic gloves, players must manipulate the environment in such a way that allows the unnamed protagonist to escape the room and proceed to the next puzzle.

Everything from aesthetics to concept and design invite comparisons with Portal — an association that isn’t always flattering for the new release. This contrast is most exemplified through Q.U.B.E.’s exiguous story. What little there is mirrors that of the first adventure through the Enrichment Center as pristine testing environments eventually give way to something much darker, more dilapidated, and sinister. Unfortunately, it’s all smoke and mirrors that builds to virtually nothing. It’s enough to make one wonder why Toxic Games bothered at all if they weren’t going to fully commit to the concept.

While there is little to hook one’s interest in terms of narrative or persiflage from a robotic overseer, for the most part Q.U.B.E.‘s campaign is incredibly well paced in terms of gameplay. Blocks with new attributes and other mechanics are steadily introduced throughout the game at a rate that always keeps things fresh and interesting. Additionally, save for a few exasperating exceptions, puzzles are typically implemented with appropriate levels of challenge and increasing complexity throughout the six or so hour journey. 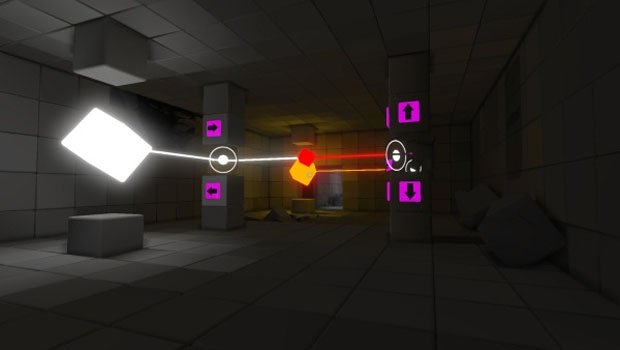 Early puzzles hinge on the player’s understanding of how each new block type interacts with one another and the environment, in conjunction with spatial reasoning and awareness. As one might expect, these first chapters revolve around some light platforming and using blocks to move the player from step to step. Eventually these sequential solutions will result in surmounting the obstacle that once prevented the player from escaping a given room and then it’s time to move on to the next puzzle.

Things become much more interesting when the player is almost removed from the equation entirely for more physics-based, timing-oriented challenges. For example, some rooms involve spheres traveling down a sloped path towards what is effectively a keyhole on the opposite side of the room. Of course it isn’t as easy as it sounds. There are depressions in the floor that will prevent the ball from reaching the target, so players must trap, push, and launch the balls towards the desired destination using blocks scattered around the room to unlock the door.

The challenge ramps up considerably as the game nears its zenith. The feelings of intense joy associated with finding a solution to a particularly difficult room are quickly followed by more head-scratching (and violent outbursts) at the even more complex challenge that lies just beyond. Regrettably, that difficulty curve hits a wall when Q.U.B.E. introduces a series of puzzles involving magnets. The solution to these puzzles are relatively simple but demand a level of the precision that the game almost doesn’t allow for, making them difficult in all the wrong ways.

In clear contrast to the rest of the game where clever thinking equates to success, luck and persistence play a larger role in overcoming the magnet puzzles than anything else. I also had the misfortune of playing through this miserable section of the game twice thanks to a game-breaking save data glitch and Q.U.B.E.‘s exclusive use of autosave. As annoying as that was, the feature isn’t all bad. Later on it proved rather useful when an integral part of a puzzle vanished with no explanation. 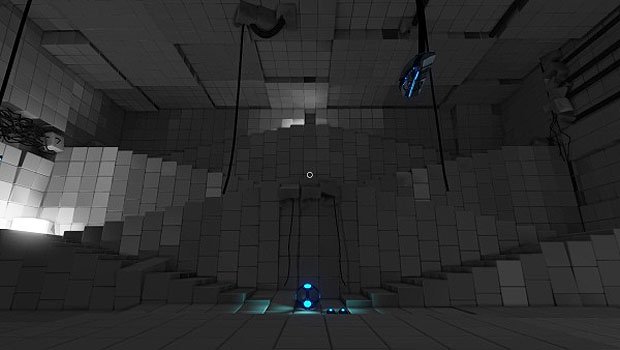 Interestingly enough, the loathsome magnet puzzles, unresponsive controls and errors all coincided with the pinnacle of Q.U.B.E.’s vapid narrative. It was as if the entire game built up to a moment of anticipation only to fizzle and leave a lasting stain on what was otherwise a great experience.

There is a brief coda that helps to remedy some of these problems. The final rooms offer a short series of free-form puzzles that stand apart from the rest of the campaign. These challenges employ the skills the player will develop over the course of the game and unleash them on puzzles that feel far less restrictive whilst exemplifying some of the most entertaining and inventive design that Q.U.B.E. has to offer. Sadly, it’s over all too quickly, acting like a chaser to make a bitter pill easier to swallow.

I found it rather unfortunate that Toxic Games waited until the final moments before the credits began roll to showcase some of their strongest material. I finished Q.U.B.E. wanting more — something I mean both as a compliment and criticism. It’s airy, far too subtle, and poses far more questions that it cares to answer. Even with so much unrealized potential, this fledgling studio has created something compelling and it will be exciting to see what they do next.

Q.U.B.E. may not be the most original game. It has problems and leaves plenty of room for improvement. Regardless, it’s a genuinely enjoyable experience that fans of first-person puzzlers should not miss out on.