There are a few different philosophies that developers subscribe to when making a sequel. Some make wild design changes, some make iterative improvements, and some leave the basic pieces intact while expanding the narrative. Puzzle Agent 2 is definitely a product of the latter philosophy, and fans of the original will likely appreciate that fact.

For others, Puzzle Agent 2 might be a bit harder sell. Your mileage may vary, and the variance is largely dependent on how tolerant you are of ordering photographs chronologically and sliding block puzzles. 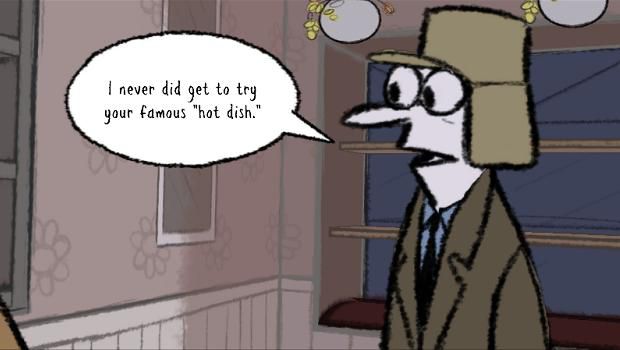 For the uninitiated, the Puzzle Agent series follows Nelson Tethers, of the FBI’s Department of Puzzle Research, through a Professor Layton-esque point and click adventure with discrete, self contained puzzles. This sequel aims to tie up the some of the loose ends left by the first game, after Agent Tethers’ first trip to the unsettling small town of Scoggins, Minnesota. While the government was satisfied that he got the eraser factory back up and running, Nelson took it upon himself to truly solve the mysteries of the missing foreman and the Hidden People — red faced forest gnomes of legend.

Continuing the Puzzle Agent tradition, the story takes a few unexpected turns and it’s a bit darker and more bizarre than the art style might lead one to believe. The presentation works well, but it may surprise players who are expecting something slightly less weird.

The art style is based off of the drawings of Graham Annable. It has a fantastic cartoon aesthetic that almost feels like it was drawn in crayon on canvas. The downside to the hand drawn artwork is that the animation ranges from jarring to nonexistent at times. While it looks great in still images, the animation (or lack thereof) takes some getting used to.

On par with the previous game, Puzzle Agent 2 showcases voice acting done well. Each of the characters has a distinct personality, and a lot of that is derived from the voices. From the curious Tethers to the mysterious Korka, welcoming Valda or creepy Bjorn, you can tell that a lot of care went into directing the voice work to fit the universe. 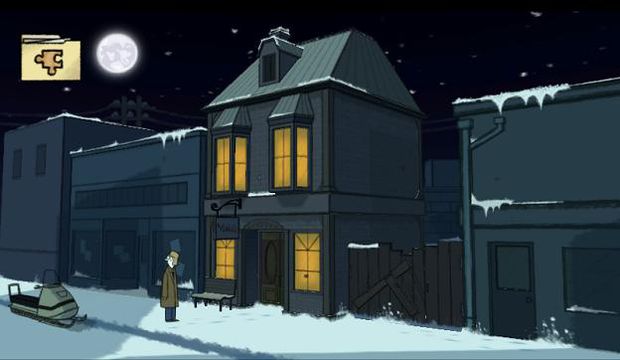 One slightly unfortunate result in this sequel is the recycling of assets from the previous game. Most notable is the music that plays during a puzzle, but certain locations have also been reused, including Valda’s Inn and the Moose Ear Diner. The writers at least acknowledge the retreading of ground, as Tethers will occasionally reference occurrences from the last game. In the end, there are more new assets than old, so it is just a minor niggle near the beginning.

One of the supposed benefits of reusing locations, characters, and music is that the development team had more time to spend on designing puzzles. As the central gameplay focus of the Puzzle Agent series, the puzzles were a bit disappointing this time around. Though I wouldn’t go so far as to say that the puzzles were bad, none were particularly good either.

A well designed puzzle is clever and elegant, leaving the player feeling satisfied after successfully figuring it out. Many of the puzzles in Puzzle Agent 2 are immediately obvious, some can be solved by brute force methods, and still others are borrowed from history and even the previous game. Puzzle aficionados will immediately recognize concepts like sliding blocks, crossing rivers, bouncing lasers, and ordering images, and they will already have strategies for those. 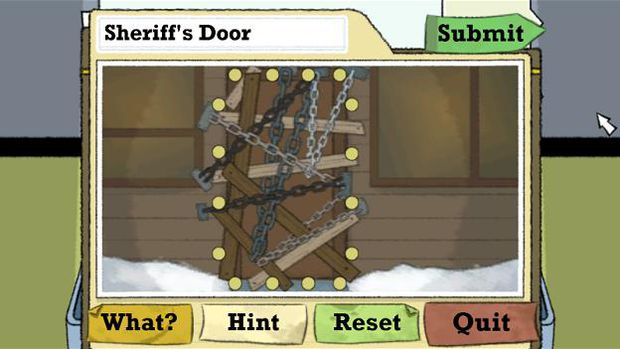 One strange decision in the puzzle design is that a few require non-trivial mathematics knowledge in order to solve them. Knowledge of the digits of pi, understanding of base-2 counting, and even familiarity with basic Calculus all show up in various puzzles. While math nerds (like myself) will have little problem, it seems like another inelegant point that the puzzle solutions rely more on knowledge than logic.

And then there are a select few puzzles whose rules are not quite explained well enough, causing the player to fail through no fault of his own.  While the penalty for wrong answers is minor, it is a bit frustrating to have a submission rejected simply because a drawing wasn’t clear or a rule was easily misinterpretable.

Still, to reiterate, the puzzles featured in Puzzle Agent 2 are not bad overall.  They simply could have been so much better.  Rather than being the perfectly cooked, delicious steak that you miss immediately after you finish, they are the breakfast cereal that is palatable and will tide you over until lunch time.

With about four hours of total gameplay, there are certainly worse ways to spend ten dollars. Fans of the first game will enjoy their time spent returning to Scoggins, despite the slight dip in puzzle quality and quantity.  Newcomers would almost certainly be better off checking out the original Puzzle Agent, not only to enjoy superior puzzles, but also to start at the beginning of a truly bizarre, entertaining narrative.