Like many, I have had my share of superhero fantasies. It seems like a lot of effort to try and save the world, however, and I have been more than happy to enjoy the fantasy through my gaming experiences. Ubisoft’s PowerUp Heroes tries to get the player a little more involved in these fantasies, casting you in the role of Earth’s savior and giving you an awesome array of powers to do it.

It looks like a game made for kids and, in a lot of ways, it definitely is. But PowerUp Heroes is also a rather capable — if casual — fighting game that deserves some attention. 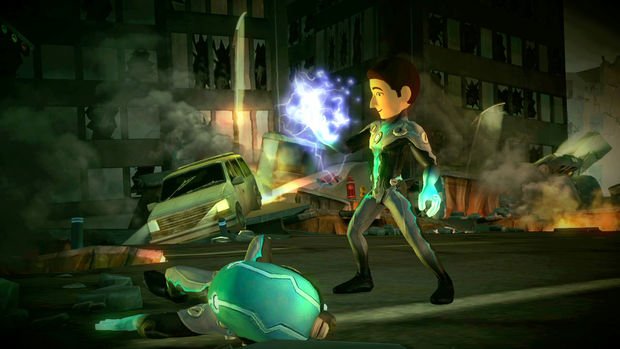 In PowerUp Heroes, you play as yourself in so far as you are your Xbox 360 avatar. Granted a powerful suit of armor by a fallen hero, you must save the Earth from the evil robot Malignance and his army of warriors. It’s a fighting game and contains the appropriate amount of plot with the occasional cut scene to remind you who you’re fighting but that’s not really why we’re here.

The campaign consists of sixteen, “best of three” battles. That seems like a healthy number, but at the halfway point of the game you’re faced with upgraded versions of the last eight battles you fought. They do have differences, being more powerful, more aggressive and having some unexpected surprise in their arsenal but you basically fight everyone in PowerUp Heroes twice.

This is acceptable for two reasons. First, the difference in the difficulty between fighting the first wave and the second is dramatic enough that you may as well have been playing a tutorial until you hit the “X” versions of the enemies. While the spiking in difficulty isn’t too severe, it does crop up again in the final encounter which fails to avoid the all-too-common trap of the over-powered last boss. But even that is excusable for the other reason; the combat is genuinely fun. 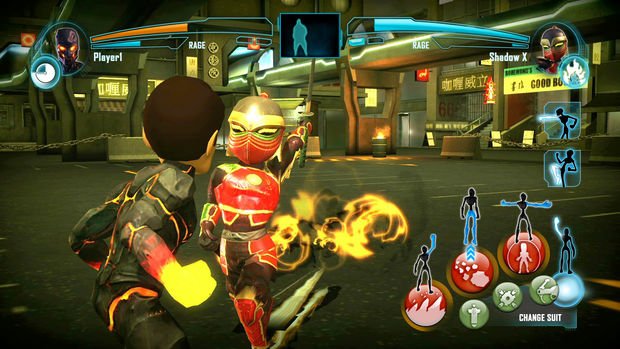 When in a battle, the game is presented in an over-the-shoulder perspective. As basic attacks you can punch to fire projectiles at your enemy or kick to move into close combat and deliver a combo consisting of punches and kicks. Incoming attacks are dodged by leaning to one side or the other. Your suit also comes with three super moves, limited by recharging between uses, and every move has its own gesture to perform.

It’s not complicated, which makes it easy to fall into the rhythm of fighting. Every move has a counter of some variety, whether it’s interrupting your opponent’s incoming melee attack with a quick kick or firing off a projectile to stop them from tearing open a hole in the fabric of time and space, and the balance is based on the ease of countering attacks and the length of time it can take to perform some actions. Special attacks might be as simple as raising and lowering an arm, while the game’s more devastating powers require lengthy charge times, so there is a bit of strategy to them.

Defeating your foes gives you access to their suit for your own use. Once you’ve earned your second, you can take two suits with you into a match and swap between them by raising your left arm. Having the two suits opens up powerful combo opportunities, allowing you to combine multiple moves using stun attacks. Once you find a pair of suits that work well for you, chaining together these motions feels natural and the game does a pretty good job of keeping up with your actions, though you can get a bit ahead of yourself if you’re trying to do too much too quickly. A little further depth is seen in unlockable power-up items, one of which can be taken into a fight and provide an assortment of damage, speed and defensive bonuses.

All that said, the fact that nearly half of the suits are just slight variations on another of its type does limit the game somewhat. It’s nice to be able to have a pair of suits that use similar attacks for ease of use, but players who do this may find themselves at a bit of a disadvantage when going up against tough opponents by using a lower-level suit. 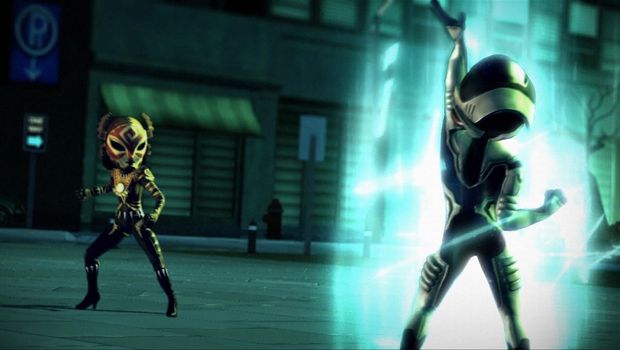 When you’re feeling competent, you can take the battle to your friends locally and online. Local play presents a split-screen view that’s compact but serviceable and the game has no trouble detecting the actions of both players (but does seem to need a bit more distance from the sensor than other games — make sure you have some extra space). Online, you can engage in matchmaking sessions or ranked battles and I had no trouble whatsoever competing in the online space.

PowerUp Heroes uses your Avatar and, thus, everything has the same kind of soft, cartoon feel to the visuals to complement them. The visuals serve the action decently but aren’t anything to write home about. The audio does a lot to enhance the experience, with a lot of booming explosions that sound great on surround sound system. It sounds like you’re in the middle of an epic confrontation, which is exactly what you want when that’s what you’re doing.

The tragedy of PowerUp Heroes is that it’s actually a rather good game, but one that lacks any memorable characters. Ubisoft does toss in some references to their other properties, with suits based on the Rabbids and Assassin’s Creed unlocked by defeating Malignance, but not being a publisher known for producing fighting games makes this a title likely to be overlooked. That’s a shame, because the combat mechanics in this game are perfectly suited for Kinect and could be utilized very effectively by other fighting game franchises looking for a good way to translate some of the more fantastical elements of their series’ into a game which uses the system.