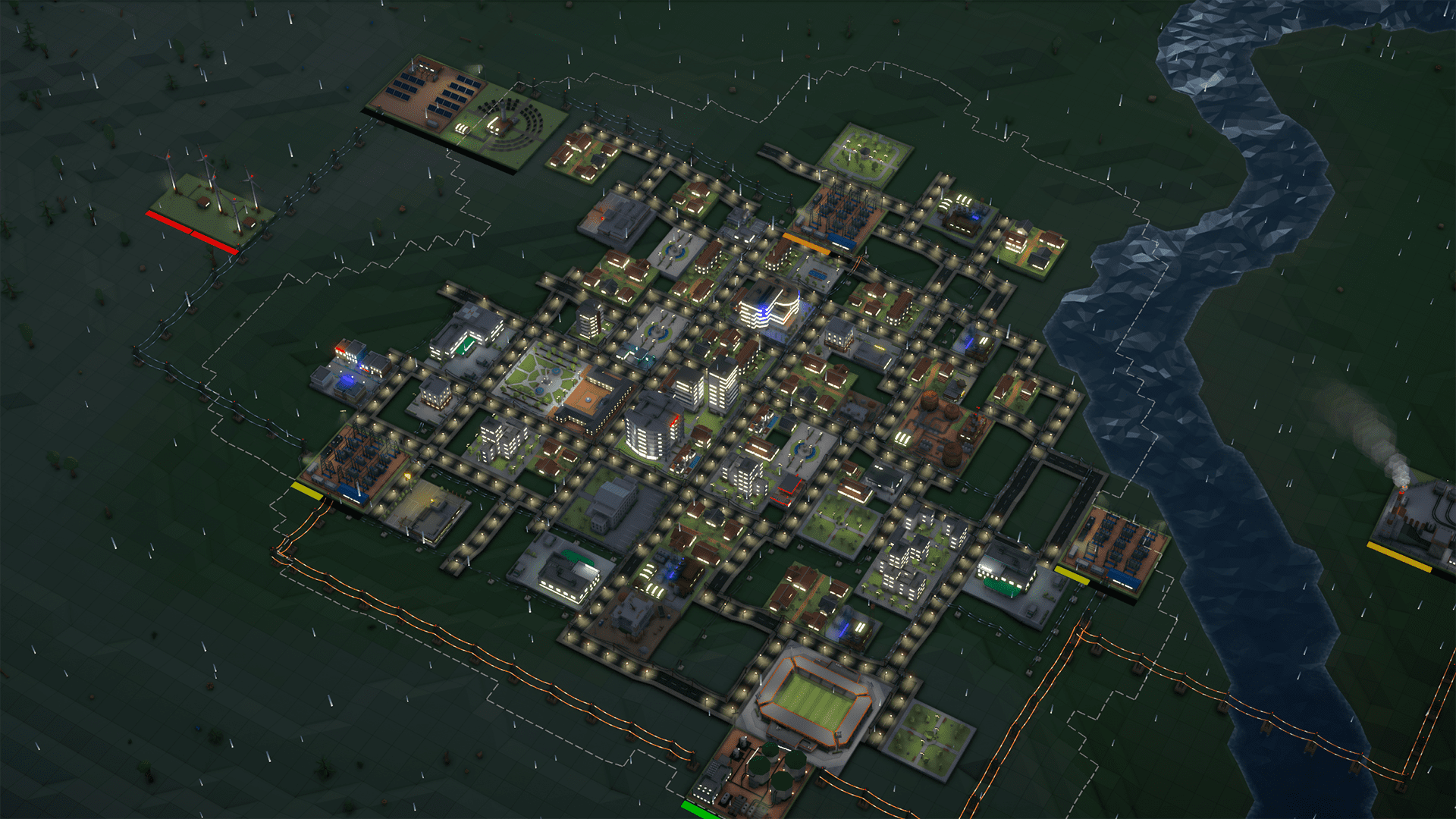 Plug it in, change the world. You are my electric girl

I remember the first time I picked up Simcity on the SNES. I didn’t understand a damn thing about urban development, the terminology, or how roads work. Strangely, I have a clear image of what my first attempted town was, and it was really just a mash of the prebuilt buildings. What were these R’s and C’s that appear in squares?

I probably would have been between the age of 6-8 at the time, so cut me some slack. I’d eventually pick up the finer points and build a few cities on rock and roll, which I think is pretty good for that age range. I quickly grew to love Simcity and fill my small-town brain with lots of romanticized notions of urban life.

But my years of digital city development did not prepare me for Power to the People. Sure, I’ve slapped down some power plants and strung up some power lines, but I never had to think about how simplified the experience was. Then I tried my hand at building a grid, and the popping sounds of my failure filled my ears. 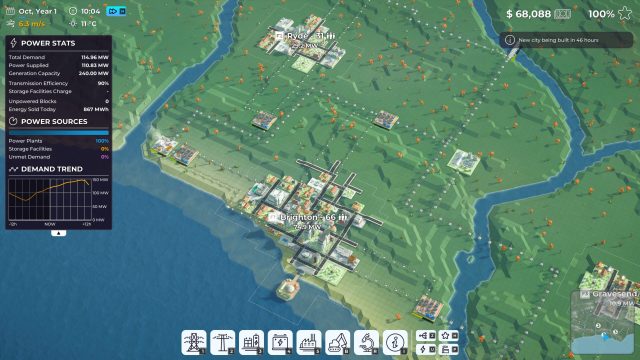 Power to the People is like somebody’s sick idea of a mod for any popular city builder. Someone grew dissatisfied with the unrealistic nature of the power system and decided to amp it up. So, instead of actually building a city, you simply need to keep one powered. Then another one. And another one. Then someone starts mining for cryptocurrency, and your already strained grid starts buckling under the pressure. Fireworks!

I’m not an electrician or an engineer. I’ve mucked around in the internals of some old consoles, but I wouldn’t claim I know how to wire a house, let alone a city. I’ve never really thought about it. Electric juice flows through rubber strings and into my home, and if one of those strings is knocked down, someone needs to come and put it back up. Did you know there’s more to it than that? It surprised me, too!

It starts off pretty basic. You need a source of power, a way to change that into a lower voltage that buildings can drink, and if you’re feeling sassy, some storage units that can hold excess juice for when you need it. But then, the city starts expanding, and then another one forms, and you need to stretch that grid out to meet their needs. It takes more than just running wires, however, because if too much power is funneled through one place, it will overload and explode. Yeesh.

When I started off in Power to the People, I was awful. The goal is to survive as CEO for 50 days without your approval dipping below 50% or bankrupting your company. For the first few areas I tackled, I limped across that finish line. Portions of my grid were going off like popcorn kernels, but as long as I patched them up quickly, no one would get pissed off enough to fire me.

Eventually, I did learn, however. My octopus “grids” gave way to stable setups that usually only required occasional tweaking. From there, it’s managing weather events, the occasional disaster, and expanding as the cities do. The pace of Power for the People is essentially one day at a time. At midnight, everything pauses to allow you to make repairs and upgrades in peace, so there isn’t much to do during the day aside from hitting the fast forward button and putting out fires.

I always found getting established to be the most difficult part of any given level. There isn’t much room for error as you work with limited resources, but once you start pulling in a more stable income, you can easily reconfigure the grid as you see fit. That’s perhaps the most unrealistic part of Power to the People: you can make changes in an instant. If a particular area is causing you trouble, you can simply plop down whatever you need to shore it up, so long as you have the money. 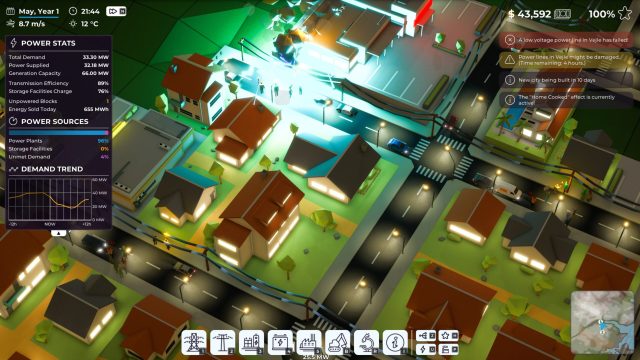 As you complete levels, you’re given access to more gear. However, little of it is very game-changing, and that is perhaps Power to the People’s biggest downfall; there isn’t much variation from area to area. Once you have the basics, there’s little to be surprised by. Unlocking a more expensive power plant doesn’t really change the strategy, and the landscapes might as well be randomly generated by how much impact they really have on gameplay. It starts to feel like going through the routine.

There are some attempts at variety, such as different climates, map-specific perks, and other obstacles. The issue is mostly that they don’t really affect much. If you’ve proven you can manage a grid, you can probably do it again barring some unforeseen disasters.

Speaking of which, there are leaderboards, though, given the random nature of the events in each level, it seems like a strange inclusion. On one stage, I landed low on the leaderboards because an event caused havoc on my grid. It was beyond my control, and the best I could do was survive it. Another player wouldn’t have had that same issue. I’m not hung up on my standings in Power to the People, I just thought it was strange that it would tell me how much I suck due to circumstances that I couldn’t have predicted. 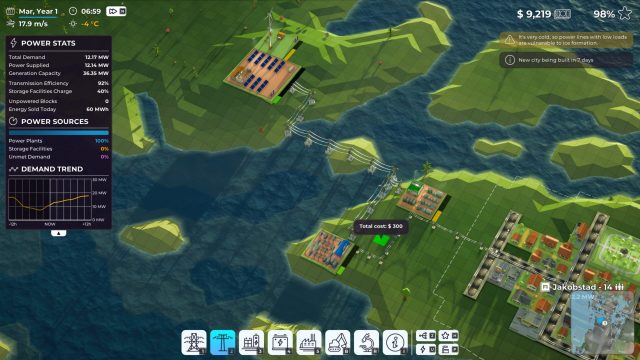 That’s essentially the main problem I have with Power to the People; I don’t see any lasting appeal. There’s certainly a decent swath of areas to play in, three difficulty settings to try out, and it doesn’t feel limited in content, there just isn’t much variation to its gameplay. I don’t see myself going back to it in the future to try and advance my skills.

At the same time, I wouldn’t argue that Power to the People is well executed in everything it does. It’s aesthetically pleasing, has that horn-heavy soundtrack that almost every city-builder uses to lull you into a trance, and there wasn’t any part of the formula that I didn’t feel was locked solid. I recommend it if you know what you’re getting into. If you want a title about managing a power grid, have at it. If you’re hoping for a wrinkle in that formula, you’re probably not going to find it.