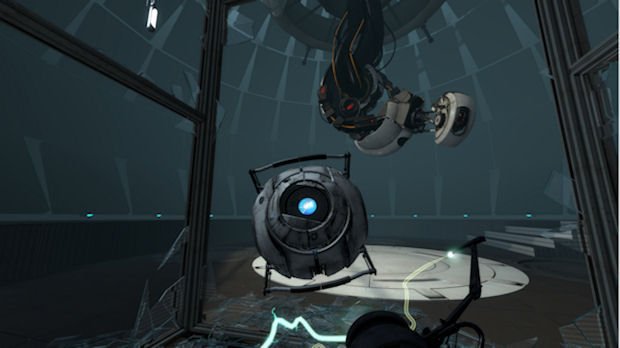 The success of Portal has been a staggering achievement, to say the least. Starting life as a free independent game by a group of technology students, it became an underdog release in Valve’s The Orange Box, yet grew to become one of the most critically-acclaimed, quoted, and beloved games of the generation.

Portal 2 is the culmination of Portal‘s success, proof that its original concept and meme-spawning jocosity can stand on its own two feet. It helps that the game just so happens to be one of the most fantastic experiences ever presented as a piece of software.

Aperture Science is in ruins following the events of Portal, but protagonist Chell is still trapped within its confines. That is, until she is discovered by Wheatley, a neurotic personality core responsible for the welfare of Aperture’s human test subjects. He takes it upon himself to help Chell escape, but not before the demented GLaDOS reawakens and decides to exact revenge. You know … after you murdered her? 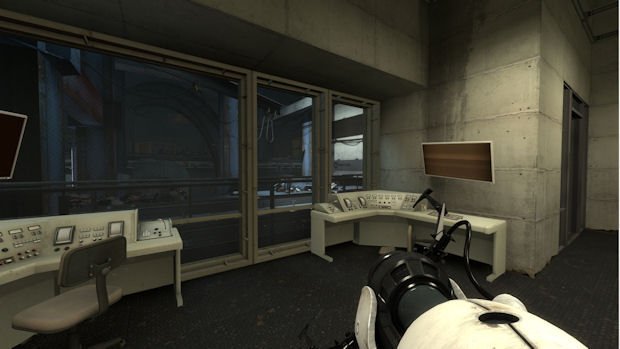 If the writing in Portal was great, then the dialog and characterization in Portal 2 is unparalleled. Not only is Portal 2 perhaps the funniest game on the market, it’s also home to some of the best character development I’ve ever seen in interactive entertainment. The way in which both Wheatley and GLaDOS grow during the course of the game is sublime, and the gradually unraveled history of Aperture Science makes for a compelling sub-story that’s perfectly presented.

Whereas Portal was much more of a straight puzzle game, the structure of Portal 2 makes it feel more like an adventure game wearing the clothes of a puzzler. It’s littered with truly epic moments and thrilling chase sequences, enhanced by a deft use of incidental music that evokes some of Half-Life 2‘s most exciting moments. In many ways, Portal 2 is to Portal what Half-Life 2 was to Half-Life. Everything’s bigger, there’s so much more going on, and by the time you reach its majestic conclusion (and Portal 2 does end majestically), you’d have to be a sociopath to not feel completely satisfied.

When it comes to gameplay, Portal 2 isn’t so far removed from the original game, but it does add a lot more features. Yet again, the central focus is on solving puzzles using a gun that shoots two linked portals. Many of the challenges don’t feel quite so unique this time around — thanks in part to the fact that the central gimmick is no longer new — but this is made up for by the various ways in which puzzles take place outside of test chambers and during the aforementioned chase scenes, which certainly makes them more lively, if not quite so innovative. 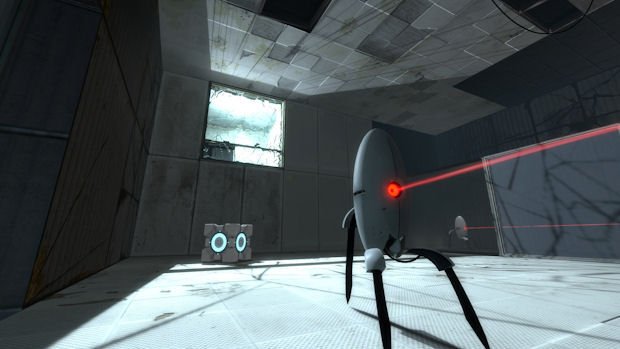 That is not to say that Portal 2 is without its own fresh ideas. The biggest addition to the game is the use of various paint-like gels that play around with the physics of the game. The blue repulsion gel turns any surface into a glorified trampoline, with players able to jump to new heights, or cross large distances by bouncing off walls. The orange propulsion gel speeds up players who run along it, allowing them to build up significant momentum. Finally, there’s the white conversion gel, which turns any surface it touches into something that can host a portal.

There are some incredibly clever ideas using these gels, and bouncing or sliding around the levels can be quite amusing. Still, I can’t say I enjoyed the predominantly gel-based puzzles as much as the more “traditional” ones. Gel puzzles aren’t bad by any stretch of the imagination, but once the levels focusing primarily on them were completed, I was glad to get back to more standard levels. The gels work far better in stages where they complement a puzzle, rather than act as the central theme of one. 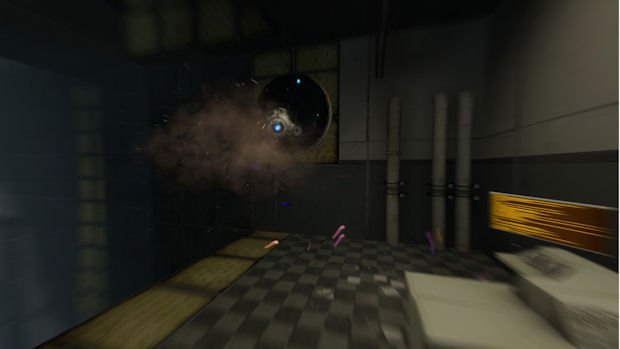 The more straightforward tests give you some extra toys to play with, too. Thermal discouragement cubes bend laser beams, allowing for some very complex puzzles. Aerial faith plates act like catapults, forcing the player across huge distances. Gravity beams trap objects and players and transport them slowly through the air, which leads to some of the most inventive puzzles in the game. My favorite new gimmick is the hard light bridge, however. These can cross gaps and act as shields, and there are some really clever ways in which they’re implemented.

My only gripe is the they’re never used quite enough for my liking. The light bridge puzzles feel particularly brief, despite how brilliant they are. Perhaps their restricted use stops them from feeling as tired as the gel puzzles, but I still would have liked to see what more could be done with them.

The main campaign takes between six and eight hours to beat, and from beginning to end, it’s a thoroughly endearing experience that burrows inside one’s head and refuses to leave. Beyond the witty dialog and the ingenious puzzles, Portal 2 is simply an engrossing overall experience. It presents a world that’s beyond fascinating, a world that offers just enough information to make you feel compelled and curious, but never enough that you feel you’ve seen it all.

Aperture Science is, itself, an evolving character that you grow to love for its quirkiness and humor, yet despise for its sordid history and miserable end. So too, do we learn to adore GLaDOS in spite of reeling in horror over what she really is and the things she’s done. As for Wheatley … well, you have to just adore Wheatley. 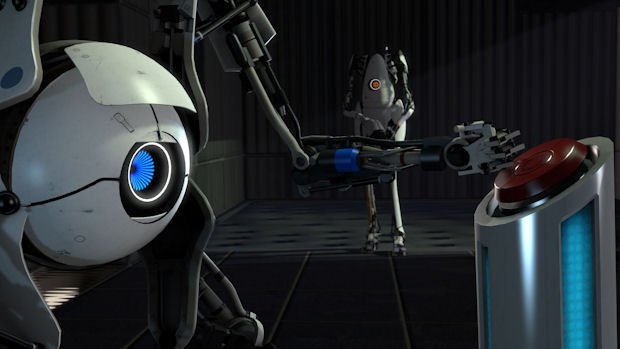 The single-player experience would have been enough for me, but the addition of co-op presents a series of levels perhaps more brilliant than anything that’s been done before. Not only does it feature its own surprisingly dark narrative and two ridiculously charming new protagonists in Atlas and P-Body, the way in which four portals and two players have been integrated into the existing gameplay truly demonstrates the creative brilliance of the series.

Co-op comes with some provisos — you’re going to want to find a player with a headset, preferably an actual friend as opposed to a random stranger. The best experience is found with two players who have not yet played any of the puzzles, as co-op’s biggest strength lies in the mutual discovery of a solution. There’s something infinitely more rewarding about solving a Portal puzzle when you’ve done it with somebody else. That moment when the answer hits you or your partner and you excitedly work together to make theory into practice leads to some of the most awesome moments in gaming.

Valve has done a great job of making sure players can always communicate their feelings in the game. There’s an in-game countdown timer, allowing Atlas and P-Body to synchronize their actions, and a pointer so players can clearly mark where in a level they’d like their friend to place a portal. In addition, the two robots can perform various adorable gestures, such as waving, hugging, and dancing. Not only is it cute to watch the little robots interact, the unimpressed commentary from GLaDOS makes it doubly rewarding. 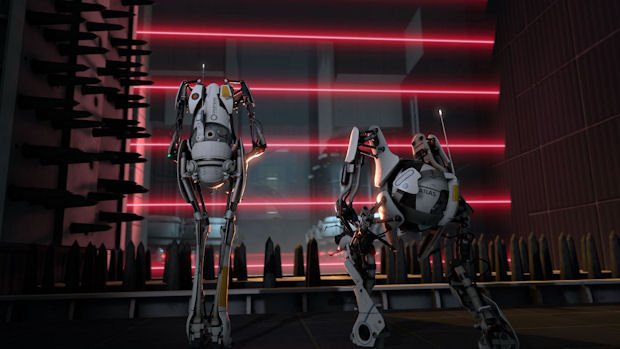 Portal 2 still uses Source, so some players may be displeased by somewhat dated graphics. Personally, I’ve always felt Source games still hold up thanks to an elegant simplicity that the visuals often bring. No, it’s not as advanced as many modern games, but it still looks good enough to not be considered ugly. I find that the art direction — with the juxtaposition of Aperture’s clean, sterile look and the dilapidated, chaotic outside world that surrounds it — makes up for the simpler aesthetic style.

It’s also worth noting that there are quite a few loading screens in the game. They never last too long and they’re easily ignored, but their frequency helps to break some of the immersion of the game, which is a shame.

It would be wrong to not mention the outstanding vocal performances put forth. Ellen McClain returns as GLaDOS and outdoes herself as a constant provider of dry, deadpan sarcasm. Stephen Merchant, a long-underrated actor, almost threatens to upstage McClain and effortlessly turns Wheatley into an affable, hilarious character who you can’t help but like. It’s rare to find one great actor in a videogame, let alone two, but the double act of McClain and Merchant is unrivaled by any other piece of entertainment software.

Except maybe by J.K. Simmons as Cave Johnson … in Portal 2.

Portal 2 is, without a doubt, one of the best games ever made. It’s a game that not only seamlessly blends puzzle and adventure elements together, but makes a name for itself as a true “comedy” game, where witty dialog and laugh-out-loud concepts have been given an equal billing with the gameplay itself. It’s funny, it’s challenging, it’s inventive, and it boasts memorable moments that will stick in your mind and make your hair stand on end every time you think about them.

Gaming simply does not get much better.