Polybius, the trippy new arcade shooter from long-time designer Jeff Minter, is a question-inducing game. Why’s it called that? What even is it? Won’t it give me motion sickness?

The name is a riff on an old urban legend that spoke of a mysterious ’80s arcade cabinet with hallucinatory side effects that may or may not have had ties to tests run by the US government. Polybius, the real game that you can play right now on your PlayStation 4, is merely an “interpretation” of those tall tales. It won’t give you amnesia or night terrors, but it will put you in The Zone.

I never want to leave The Zone. 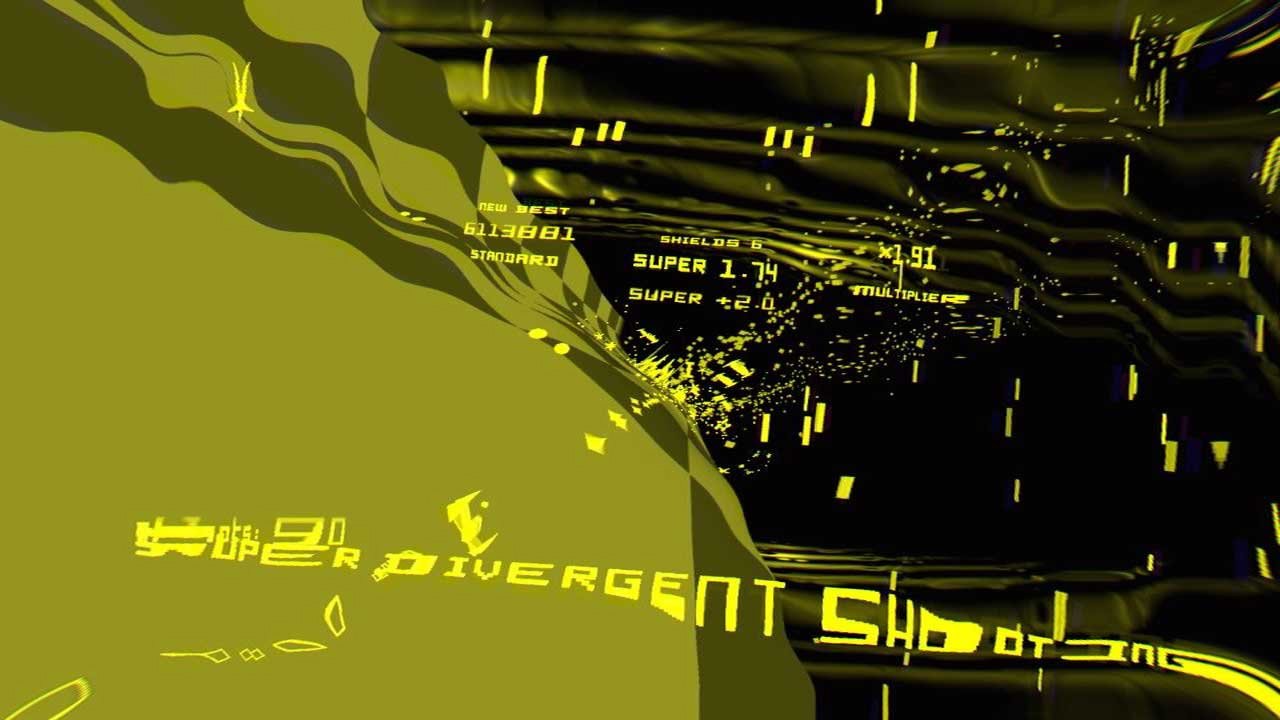 Not knowing a whole lot about this game going in, I wrongly assumed it would be super tough and mechanically complex. Polybius does work its way up to be fairly demanding, but it’s a gradual rise spread across 50 levels. There’s leeway to make a few mistakes in the standard mode and still soldier on. Starting off, you’ll steer your vessel left or right to dodge oncoming hurdles and blast enemies away as the game cries out with bizarre yet familiar arcade sound bites. A digitized voice will intermittently proclaim “Amen!” You won’t really know what you’re doing or why you’re doing it, but it’ll feel good.

Things will carry on like this until sooner rather than later, you’ll be forced to pick up on the game’s ever-expanding ruleset. You aren’t meant to make it through all of the gates that litter levels, for instance. Passing through them will increase your speed, build up your multiplier, and under the right circumstances, even fire off an obstacle-clearing pulse. But go too fast, and your brain will struggle to keep up. The pills dropped by enemies? They’re good (usually). Eggs? Even better! Crack ’em, shoot the yolk, and gain temporary invincibility. Sometimes, Polybius is less a game of avoidance and more a desperate, blink-less struggle to stay invulnerable long enough to smash through impassible objects.

When you’re playing well and maintaining full speed, it’s bliss — which makes colliding with a stray bullet (or one of the sixty other things hurtling toward you) all the more painful. You won’t come to a complete stop, but it’ll feel like it as you’re ripped out of your zen-like state of pure focus. Each mistake like that will also cost you a shield, and if you lose them all and take another hit, it’s game over.

But again, this isn’t meant to be unforgiving. You’ll gain extra shields between levels and your “best run” (your highest shield and point total) is saved should you fail and need to start a level over.

For as visually overwhelming as Polybius frequently gets, I never once felt anything approaching discomfort. The game doesn’t require PlayStation VR, but that’s arguably the most comfortable way to play. The few times I went back to try levels without a headset, I felt like I was at a clear disadvantage. I kept brushing up against speed-boosting gates I’d normally have no problem flying through and struggled to consistently gauge depth. Everything felt less natural. That’s not to say you can’t enjoy Polybius on a TV, but fair warning, you’ll probably have to work a little harder for it.

Most of the time, I had a reasonably smooth ride. I wasn’t bored or overly challenged, and that balance felt about right even as new mechanics like slalom poles and air streams were layered in. By that point, I had a firm grasp on the game’s ebb and flow. Until suddenly, heartbreakingly, I didn’t.

The final handful of levels were a total slog for me, ranging from not-fun at best to downright aggravating at worst. Polybius gets out-of-control hectic with a couple of its devious late-game additions. They’ll force you to adopt a very specific playstyle, one I just didn’t find enjoyable or satisfying.

Even though it ended on a sour note for me with a few too many elements snowballing into an avalanche of hair-pulling frustration, on the whole, Polybius had me in a trance. I’m happy just thinking about it. PlayStation VR owners, Jeff Minter fans, and arcade enthusiasts need to get in on this.