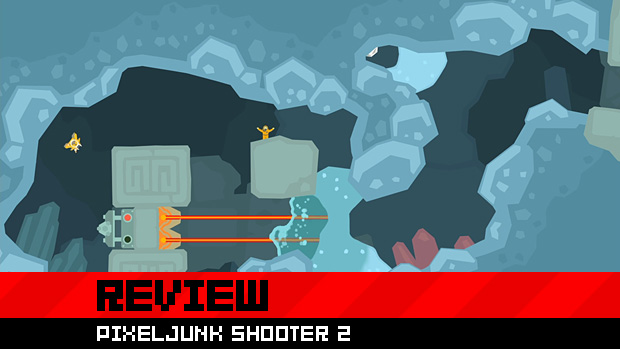 My relationship with Q-Games and their wonderful PixelJunk series of downloadable games has followed a very similar path to that of courting a real-life future companion.

After their first PixelJunk game, Racers, I felt something. It wasn’t infatuation — more of a friend crush — but I knew I liked being in their company. Next, with Monsters, I started feeling pretty hot. I was completely turned on.

Eden came along next and things got sweet — not only was I ridiculously attracted to these talented folks, but I realized they had a great personality as well! Jackpot! The total package! By the time Shooter was released I was completely, head-over-heels in love. I wanted to marry these guys.

Now, with PixelJunk Shooter 2, Q-Games’s most recent PSN offering (and their first true sequel!), is the love affair still going? Or is time to have that talk? 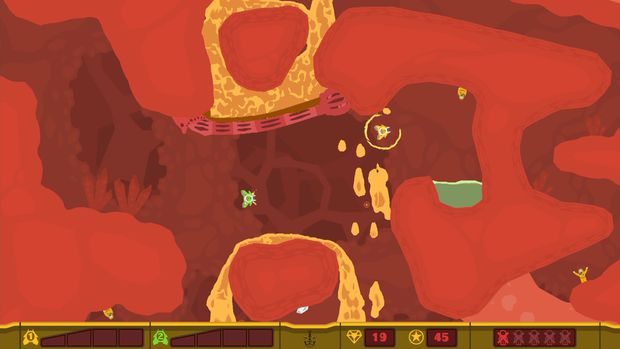 PixelJunk Shooter 2 starts exactly where the original PixelJunk Shooter left off. After being swallowed by a giant creature at the end of the first game, your little spelunking ship falls into the belly of this enormous beast and must find a way to escape and find a way back home.

Yeah, the concept is simple, but the PixelJunk games are not about their stories (or lack thereof) — they are about the simple, yet surprisingly deep gameplay, gorgeous animation, and lovely, retro-inspired high-def visuals.

For anyone not familiar with the first game, PixelJunk Shooter 2 is a 2D side-scrolling shooter, in its most basic terms. The game finds your player (or players, as this sequel once again brings back the refreshing two-player local co-op of the first game!) controlling their subterranean ship through a series of vast, beautifully-designed cave levels, solving puzzles and fighting enemies using a small, but effective, assortment of moves. 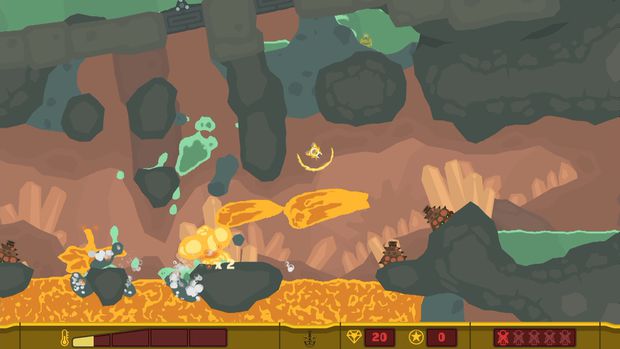 Control is simple. The left analog stick moves your ship around the screen, while the right analog stick rotates your aim. The right trigger fires missiles (which can be charged up and turned into homing shots by holding the trigger down) and the left trigger releases a grappling hook, used to rescue helpless survivors, collect level-unlocking diamonds, and activate environmental items (switches, levers, etc.).

Each level is divided into a series of sections, some larger than others. To proceed forward to the next section, players must rescue (or accidentally kill) all the survivors. By doing this, the door to the next area is opened, and players continue one step closer to the game’s end. Kill too many survivors, though, and your game is over.

Admittedly, PixelJunk Shooter 2 could have been too simple for its own good. The game plays like a combination between Asteroids and Defender, and, while I am a massive fan of these retro arcade classics, gameplay that dated could get really old really fast.

But PixelJunk Shooter 2 is so much more than just flying around and shooting things. While that aspect is great, the game is mostly about solving brilliant environmental puzzles and navigating your way through ever-increasingly challenging stages. 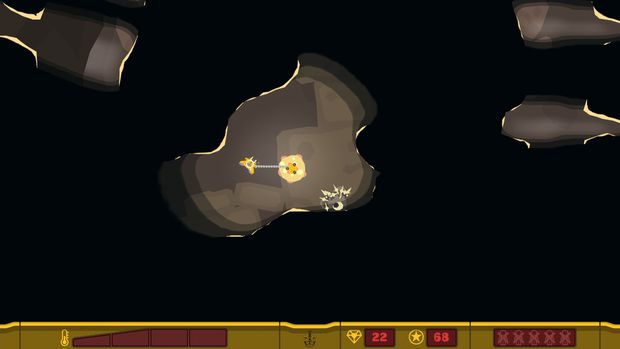 Each world in the game is completely different than the one before it. The first stage, as mentioned above, finds your subterranean ship in the belly of a giant beast. The second world takes place in the underground labyrinths of an ice cave and nearby volcano. And the third world is set in a metallic factory, full of moving machines and clever traps.

In addition to the obvious difference in aesthetics, each world also possesses completely new puzzles and gameplay to solve and conquer.

The first world, for example, has a purple bile liquid that swishes around the beast’s belly. Touching it poisons your ship, starting a countdown that forces you to find a pool of water to cleanse yourself in before the timer runs out.

In the second world, the combination of instant-kill lava and refreshing ice water is put to genius use — players are asked to use these various liquids to solve complicated, yet very satisfying environmental puzzles. (And can I please mention the liquid physics throughout the entire game are amazing?!)

I don’t want to spoil the last world, but let’s just say it hosts the game’s most fiendish and absolutely breathtaking levels, using light and darkness in creative, jaw-dropping ways.

I truly was blown away by the level design in PixelJunk Shooter 2. Each level just got cooler and more impressive as the game went on. 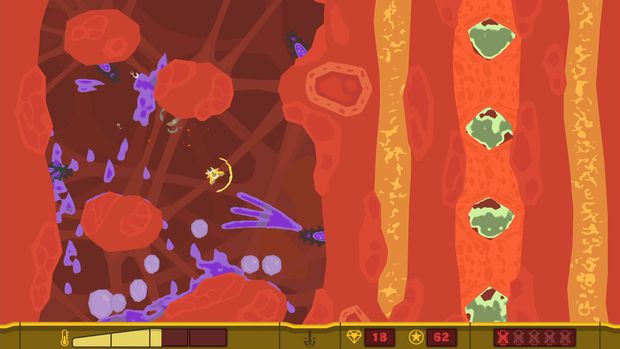 Based on the exquisite level deign alone, I would recommend this game. But even with all this, two specific things impressed me even more.

The first are the boss battles. While there are only three main bosses in the game (one at the end of each world), they are some of the most well-designed, clever bosses I have encountered in a very long time.

As you battle each boss, all the various skills you learned throughout each world come into play. This gives the game a very “Zelda” feel. You won’t be mindlessly holding down the “fire” trigger to defeat these end-of-world bosses like in most shooters. The game is all about using the environment (and the skills you have picked up along the way) to emerge victorious.

The bosses really are magnificent. 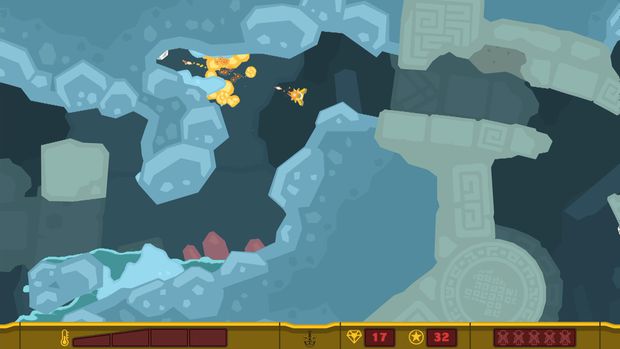 But even more impressive than the controls, the level design, and the bosses … well … I am not sure how to go about this without spoiling some of the game’s biggest (and best) surprises …

Let’s just say there are some wonderfully welcome references to classic retro games that will pop up in unexpected places and put an enormous smile on your face (even for the non-retro fans out there).

There are several points in the game when you can obtain special “suits” — power-ups that equip your ship with extra special powers. One “suit” turns your ship into a vehicle that digs through the ground exactly like the old Dig-Dug games. And this is not a coincidence. These sections feature the exact same four-direction control scheme and falling rock gameplay of the arcade classic, proving the clever reference is obviously intentional.

Even better, during the second boss fight, the game organically, almost seamlessly, shifts to a Galaga-clone, complete with attacking “bug” ships that follow the same pattern as the enemies in the old retro classic.

There are many more moments like this scattered throughout PixelJunk Shooter 2, each one more brilliant than the one before it. And it’s important to note these events don’t ever feel forced or random. They are integrated into the level so well that you won’t even notice they are happening — one thing you know you are playing the game like normal and the next you are taking part in these genius tributes. 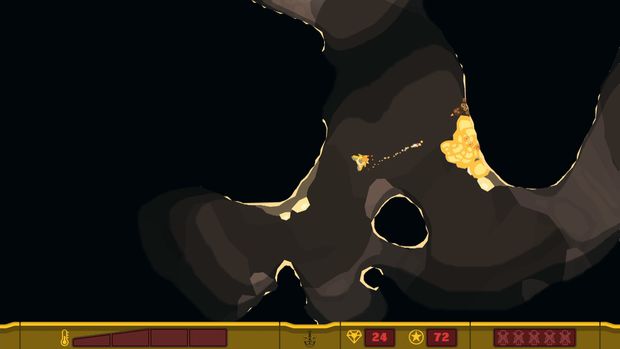 There really isn’t one negative thing I can say about PixelJunk Shooter 2. The game is even better than I thought it was going to be. And after loving the original, I had high expectations!

Like Pixar is to film, Q-Games is on quite the hot streak in the world of videogames, furthering their perfect track record with quite possibly my favorite PixelJunk game yet.

So, yeah: It’s official. I want to put a baby in Q-Games.

I am in this relationship for the long haul.