Despite simply being better than ninjas, pirates have not gotten as much appreciation in video games. We’ve seen two incarnations of Sid Meier’s Pirates!, the Monkey Island games, and the Akella pirate games (Pirates of the Caribbean, Sea Dogs, Age of Pirates) to name a few, but a full-fledged pirate roleplaying game with naval combat has never really come close to perfection.

Pirates of Black Cove attempts to change this by offering exactly that at a budget price, while adding real-time strategy in the mix. With Caribbean naval combat, land missions with light strategy, upgradable ships and characters, and barrels of laughs worth of pirate jokes throughout the game, the potential is certainly there. But does it live up to its potential? 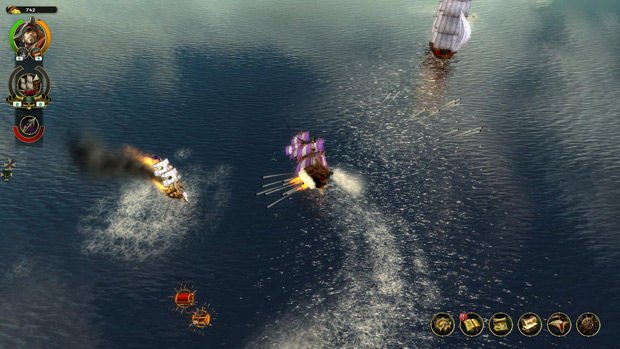 As one of three different characters that each have their own attributes (balanced, melee, ranged), you set out on your quest to work your way through scallywags and become the Pirate King of legend. Pirates of Black Cove centers around one part ship-to-ship combat and exploration in the Caribbean region, one part land-based missions, and one part managing your land army of scurvy dogs and handing in quests.

The naval combat is solid and accessible, if perhaps too arcade-y in nature for the hardcore naval fan. While you start out with little more than a horrifyingly slow floating wreck with a handful of broadside cannons, sinking ships and doing quests for the three different Pirate factions that vie for control nets you the necessary money (pieces of eight) to buy and upgrade ships. Through exploration around the map, you’ll also find “blueprints” that work as a ship and upgrade unlock currency.

Soon enough, you will have found enough blueprints and liberated enough pieces of eight to afford yourself a decent ship. Contary to the more open gameplay found in the bug-ridden yet quite enjoyable Pirates of the Caribbean from 2003, all progression in Pirates of Black Cove is done through quests. There is no trading of any kind, because this is not a merchant simulator; it’s the pirate’s life for you. 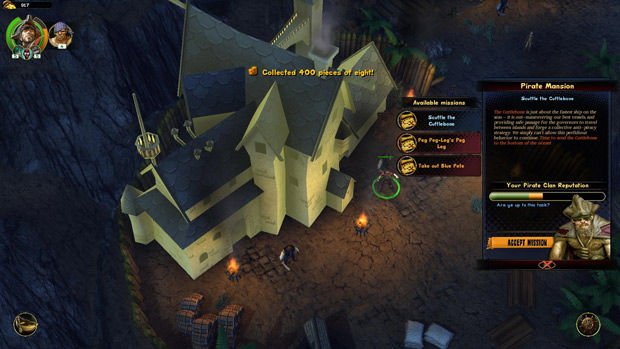 Progression is a semi-linear affair, with completed quests occasionally leading to a batch of new quests that you can complete in any order. Once you have completed enough quests for one faction, the resulting gained reputation allows you to start doing missions for the next faction, and so on. It’s not so much a game where you have to choose sides, as much as you simply go through all available missions to gain the highest reputation for all factions and unlock the final storyline mission.

Between the missions at sea that involve sinking ships, capturing them with a human catapult special ability — which catapults an unfortunate pirate — or escort duties, these missions stay fun throughout the lengthy campaign. Combat is fast, though once you upgrade to one of the heavier Buccaneer faction vessels it’s pretty hard to ever get sunk. Occasional maritime distractions will see you battling a Kraken or navigating a rotating maze that protects Sirens in special separate seafaring sections.

In line with its accessible nature, you won’t be seeing much ship customization beyond upgrades and special weapons. What you buy is what you get, without having to worry too much about ship statistics or crew maintenance, and there’s no chained cannonball shots to wipe out masts or any option to build a fleet beyond the ship you control directly.

The land-based combat is a different story altogether. Each pirate hero can have up to three squads of a wide variety of units under his or her command, and new pirate heroes will join you as you complete all missions for a faction. Every pirate faction has its own island base where you can construct barracks to recruit land units and accept or hand in quests. Although the units are varied enough to give you a range of melee, ranged, and special attacks in theory, the land combat doesn’t work quite as well in practice. 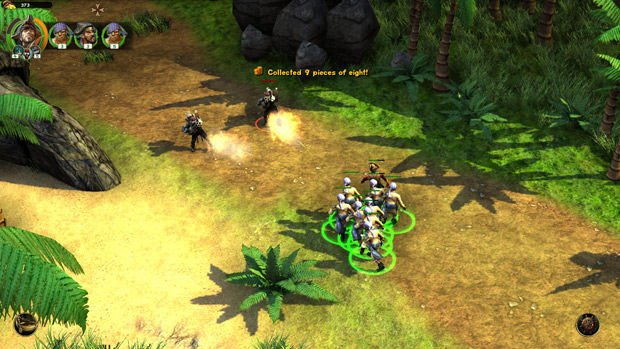 Part of the problem lies with the controls and mission structure. Practically every land mission simply requires you to walk from your landing point to a mission objective, killing enemies along the way, and walking back. Your units will usually attack whatever is next to them if they are standing still, but there is no attack-move option. You need to manually right click on enemies to attack them, but if they are melee units and start to swashbuckle with your units, it can be quite hard to click to attack them.

If you misclick and move units to the ground next to an enemy, they will sometimes just stand there and take damage until you finally click on the right spot. The controls need a lot of precision on your part, which isn’t always possible when you have a mess of units brawling about. A default attack-move option would solve all these issues, but without it the land missions range from frustrating to eliciting the feel that you are simply going through the motions to get back to sea.

It doesn’t help that the land mission areas are either too large or your units walk too slowly, which results in a long wait while all your units walk back to the landing area — something they need to do in almost every mission. Thankfully there is a “return to ship” button that automatically directs all units to return to the landing spot, but it’s still a jarring experience from the fun you are otherwise likely to have with Pirates of Black Cove.

As you progress, an inventory system will fill itself with items you can activate for things like invulnerability or taunting nearby ships, yet it’s hidden away in a menu that discourages you from remembering to use it. Having these items in a toolbar, World of Warcraft style, would’ve been highly beneficial. 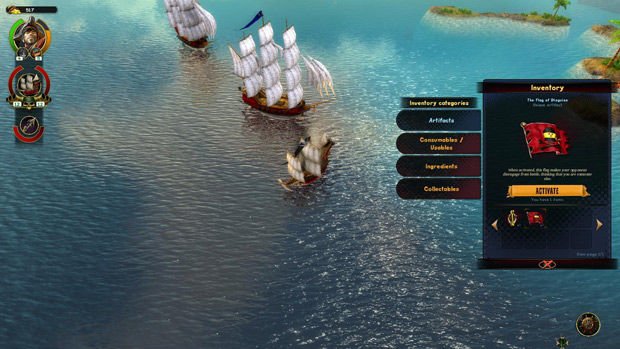 This is most certainly a game for patient PC gamers who just like to kick back and mess around with pirates. A unique “wind charm” item lets you instantly teleport to a faction base to save time, although it only works only if you are at sea. Whenever you use one, you had better remember to pick it up again inside the faction base in question or you’ll be manually sailing all the way back. It’s a bit mindboggling why there is not simply a teleport button instead of this system, as the wind charms can sometimes be hard to spot inside the base until you’ve learned its possible spawn locations.

Occasional game-crashing bugs also mean you have to be patient, although Nitro Games has been pretty quick with releasing patches already and future support seems like a safe bet. Which is great, because Pirates of Black Cove does a lot right whereas it falls short in other areas.

The dialogue is fully voiced and funny enough, the story keeps progressing at a decent pace to keep playing, and you can collect all manner of collectables — including 1000 “joke bottles” with jokes that range from hearthy chuckles to cringeworthy puns. These jokes are echoed on the faction bases by NPCs and as someone who is not averse to terrible puns, these jokes actually made me smile more than I can remember doing in any other recent game.

Most importantly, the entire game has a certain charm to it. Pirate tropes abound everywhere you look, and it’s obvious that Nitro Games is a huge fan of everything pirate; something further evidenced by the mention of swashbuckler classics like The Sea Hawk and Captain Blood on the game’s Facebook page. 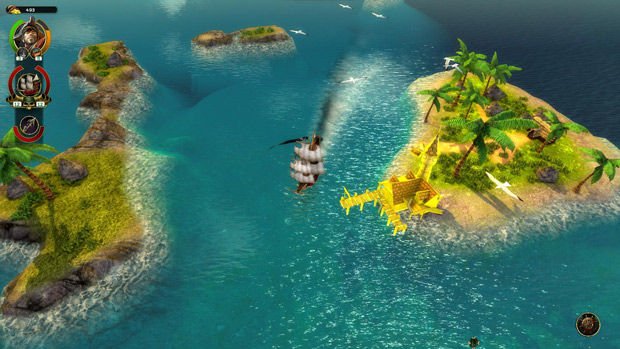 Even though the land mission structure in Pirates of Black Cove tends to be a bit bland, these missions do help to keep the gameplay varied. Essentially the game suffers from the same problem Star Wars: Empire at War had: space battles were fun, while ground missions were a bit of a mess. Other than this structural aspect, every other issue with the game — from the land-based controls to certain interface oddities and a game-crashing bug here and there — concerns things that could easily be fixed through updates.

Pirates of Black Cove has some rough edges, to be sure, yet it is still the most enjoyable and simply fun pirate game I’ve played in years. The foundations the game is built upon are strong enough to support a sequel that improves on the existing formula and does away with its flaws, whether they are issues grounded in design or controls, and I’d probably buy any future iteration set in the Oriental in a heartbeat.

If you are a big enough pirate fan and willing to overlook Pirates of Black Cove‘s faults in favor of its charm, there is enough fun to be had to make its budget price a barrrrgain. Should such pirate puns lead to haemorrhaging in your brain’s language centers, however, then this might not be the game for you.