I keep mistakenly calling it ‘Pheonotype’

Zelda II: The Adventure of Link was a massive departure from the original title. More linear, carefully metered progress, and with more RPG elements. It bore few similarities to its predecessor with its unique mix of top-down overworld exploration and side-scrolling action.

I hated it. But don’t tell boss Niero I said that. I’m pretty sure that making disparaging comments about Zelda II is a fireable offense at Destructoid.

It wasn’t the game’s formula that left a bad taste in my mouth, however. On the contrary, it was an interesting mix of play styles. Despite this, the formula didn’t catch on to a wide extent. Few games have followed its lead, with even the Zelda series neglecting its mechanics as the franchise widened.

Phoenotopia Awakening seems to have latched onto that misunderstood title and squeezed it for all it was worth. It wears its Zelda influences on its sleeve, but also layers on its own fantastic personality. The result is something that is markedly different than Zelda II, even if you can easily see its foundation, and I couldn’t be happier for that. 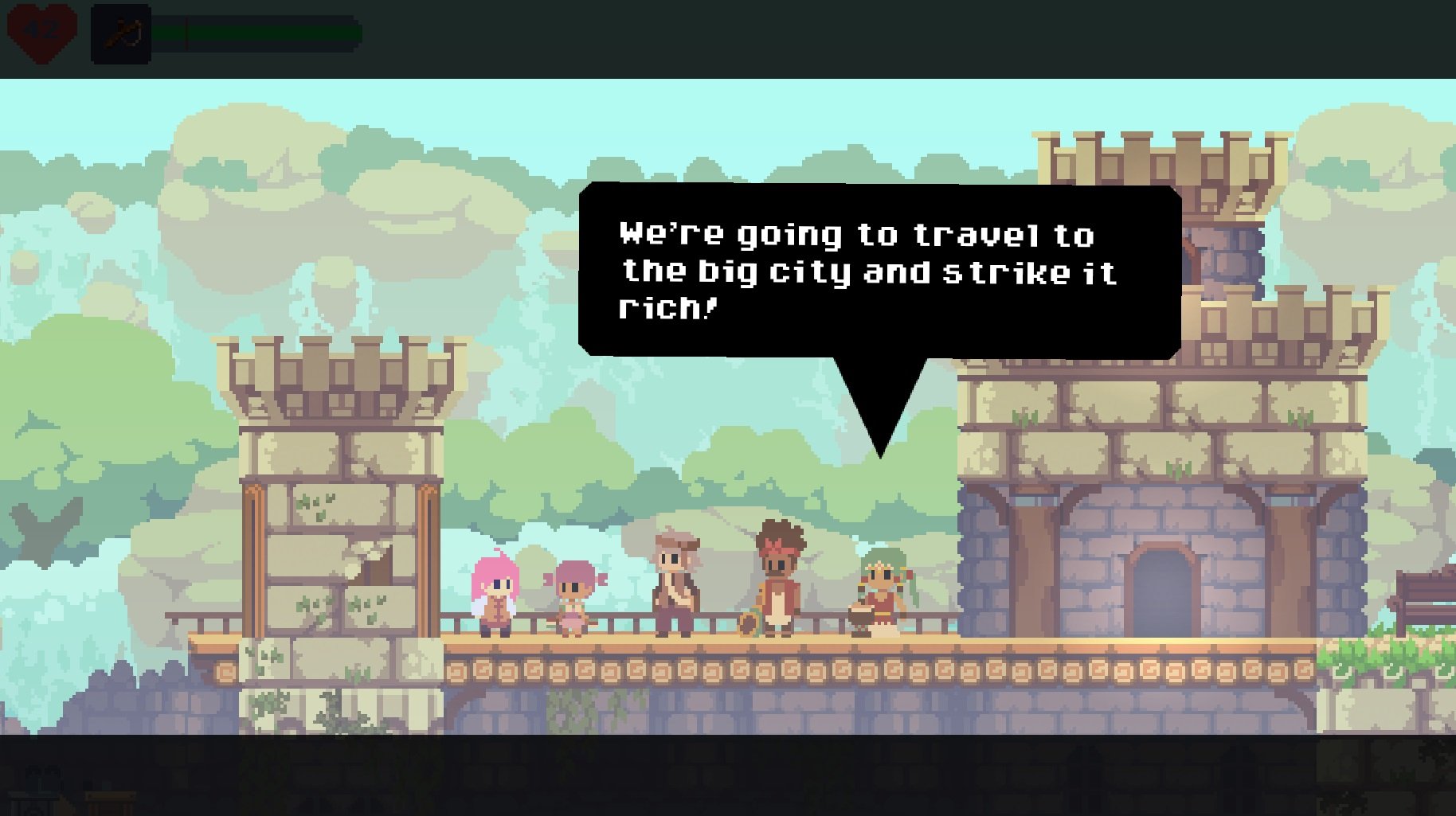 Phoenotopia Awakening is technically a remake of a Newgrounds Flash game from 2014. Many of the mechanics and the narrative have been incorporated into the remake, but everything has been lifted up and expanded on.

The starkest difference is that, rather than have you simply choose your next destination using a standard node-based world map, you’re left to explore from a top-down perspective, similar to the previously discussed Zelda II. The world isn’t very large and it’s locked down to keep the player focused, but there’s a lot hidden in its nooks and crannies.

If you’re anything like me, you’ll spend an excessive amount of time plumbing those nooks and crannies. You can find heart rubies to expand your health, stamina emeralds to extend your stamina bar, moonstones to open up teleportation routes, GEO tickets to spend at a special store, lunar artifacts to sell to a thrift store, and various other items to make your life easier. If you’re not careful, the game can frequently become bogged down under the weight of all its side activities.

However, all those side activities may be necessary if you’re going to cope with the brutal difficulty. It’s inadvisable to delve a dungeon without being adequately prepared, as save points are rather rare in dangerous areas, and the penalty for death is being unceremoniously dumped off at the last one you stopped at.

Every boss in the game got its turn kicking my butt. Even the starter slime gave me a hard time until I managed to get its pattern down. They’re well-designed battles, though. Fast and deadly, but not unpredictable, like something out of Punch-Out!!. With every attempt I could feel myself getting better at anticipating and reacting to attacks. I’d make it further, use fewer health items, until finally, I was able to topple the baddie.

I’d liken the difficulty to playing a Mega Man game with only the default buster: not impossible, but you’re going to have to focus and work at it. 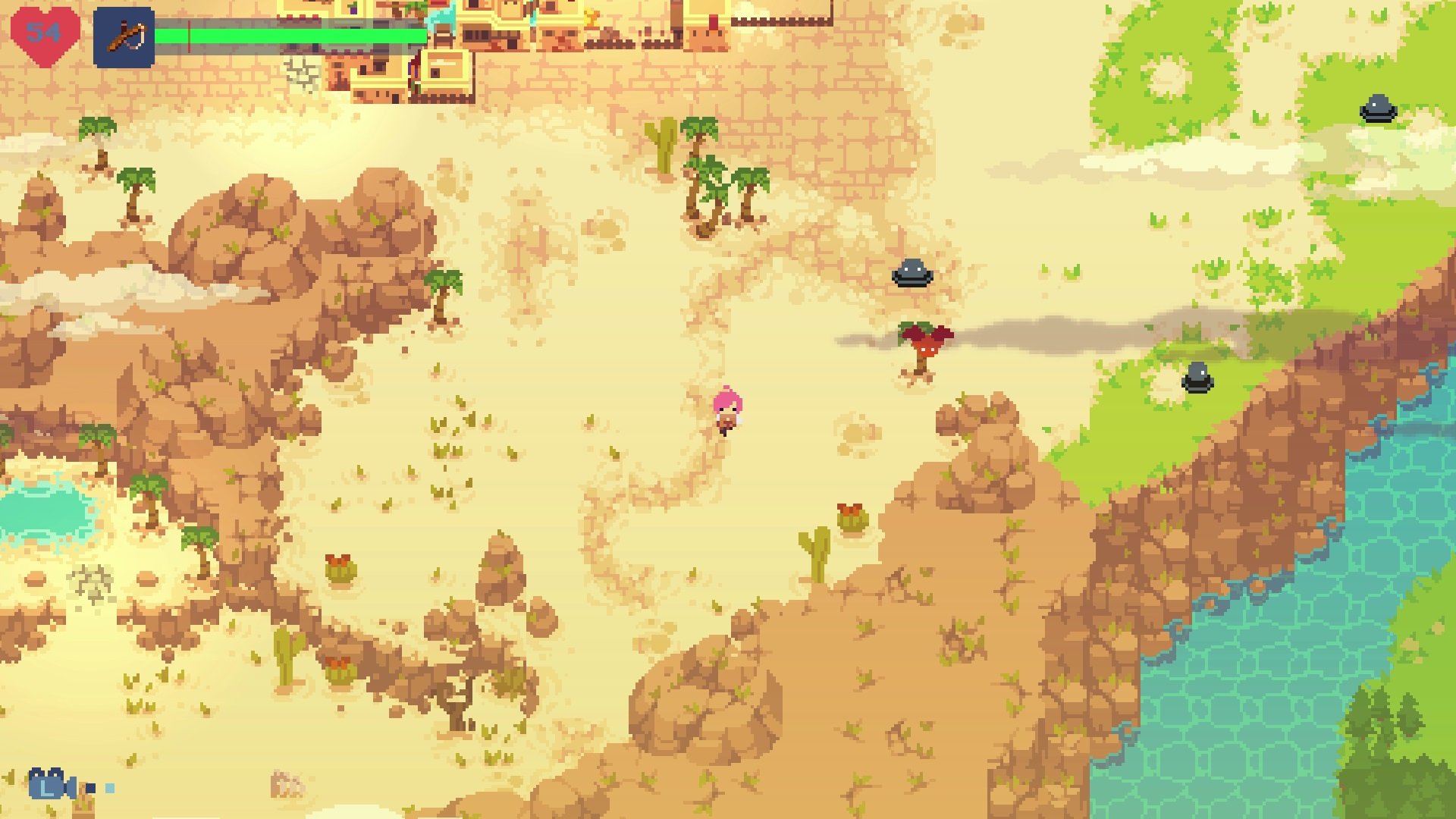 The story is set some countless centuries after a great war ravaged earth. Humanity has since emerged from their protective underground vaults and re-established a society that both lives off of and fears the technology of their ancestors.

You play as Gail, a girl whose entire village is abducted by aliens while she’s away rescuing children. Honestly, the story plays in the distant background. You don’t even glimpse the principal antagonists until much later in the game, and even then, it’s implied that they’re mere mercenaries working for the big bad guys. Instead of directly dealing with the problem facing her, Gail is largely side-tracked by the problems of others.

With that said, I don’t have much issue with the overall narrative. I found the writing to be extremely enjoyable, with a large degree of levity and a heaping helping of dry wit. It’s also consistent throughout, bringing chuckles straight through to the end. I just wish the main thread was more engaging. 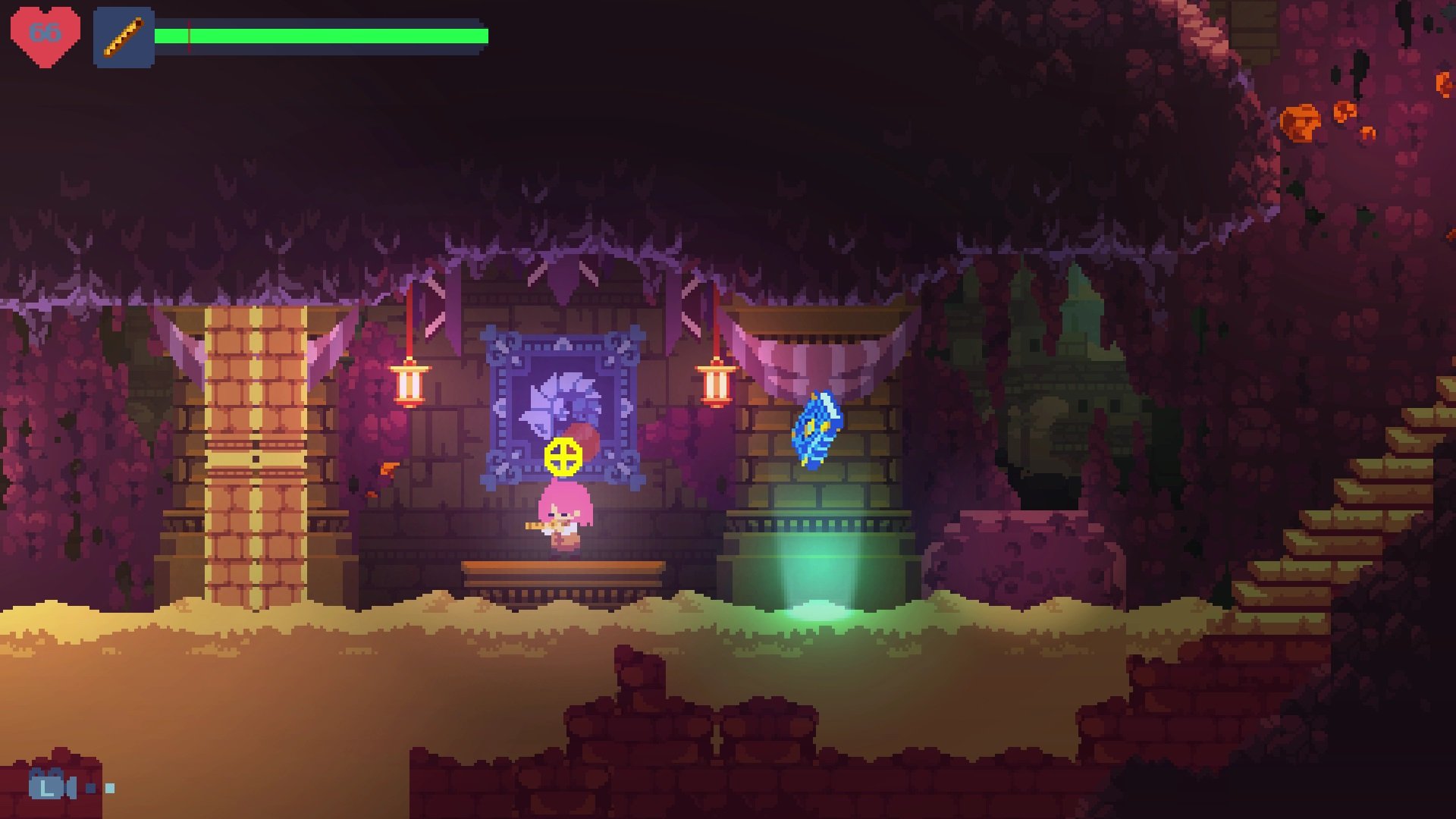 Part of the issue is that Phoenotopia Awakening is a staggeringly long game. The advertising suggests it’s 25 hours if you follow the critical path, which may be massively underselling it. With all my side-questing and dungeon diving, I clocked in at over 50 hours, and I’m certain I didn’t see or do everything. I’m not one to complain about too much content, but I’m left feeling the game was a bit unfocused and bloated. As I said, I hope you’ve got an appetite for discovery, because there’s a lot out there.

The adventure is helped along by some fantastic pixel-art visuals and expressive music. While some of the art and music hearken back to the original Flash game, they, like the rest of the game, have received a significant facelift. The animations and backgrounds are detailed, the colors are vivid, and the music is consistently enjoyable. I’d probably be tempted if they dropped a vinyl of the soundtrack. 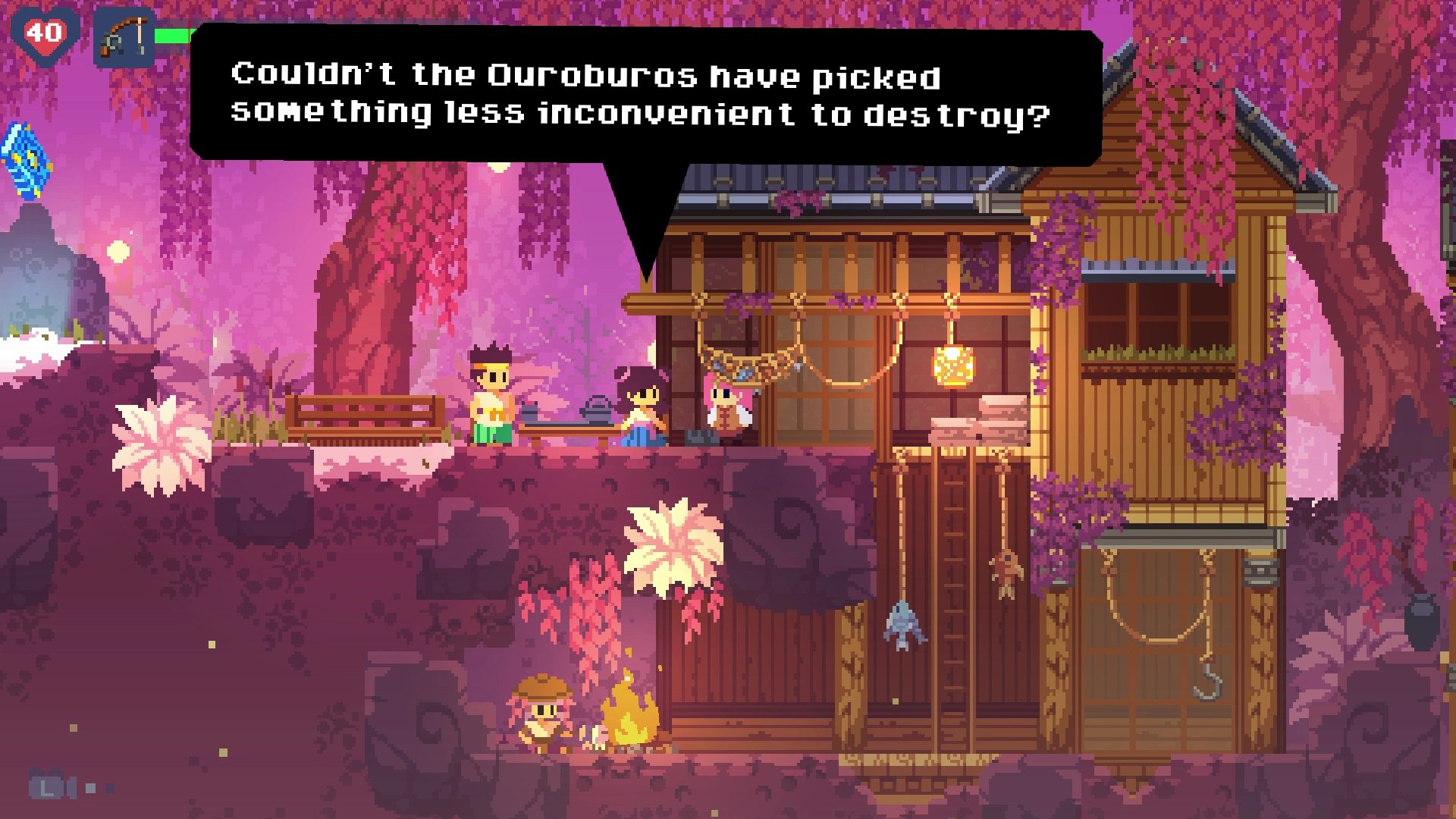 I think the major sticking point for most people will be with the stamina system. Everything from sprinting to swinging your bat drains the stamina gauge, and if it empties, you’re left waiting for it to fill. This can make combat feel jerky, especially in the beginning, where you wear yourself out by attacking, then have to limp away to the corner to recharge. It wasn’t a deal-breaker for me, however, for the whole tour, I was left thinking that some people were going to hate it.

You’ll also have to get past how unfriendly the game is. Even the environments are packed with doorways and NPCs that will take a long time to sift through if you want to experience everything. The save system is especially unforgiving, and more than once I had to put the controller down as it was too much to bear how much progress had been lost after an embarrassing death. Even the mantra of “save early, save often” won’t protect you from heartbreak.

Nonetheless, I found myself largely enamored with Phoenotopia Awakening. Its often humorous and sometimes sentimental dialogue got through to me, and its challenging but tight platforming action really appealed. I’m a little bit weary from my trek through its expansive campaign, but I’m satisfied all the same. It’s an aesthetically pleasing, unforgivingly mean, but an altogether lovingly assembled experience.