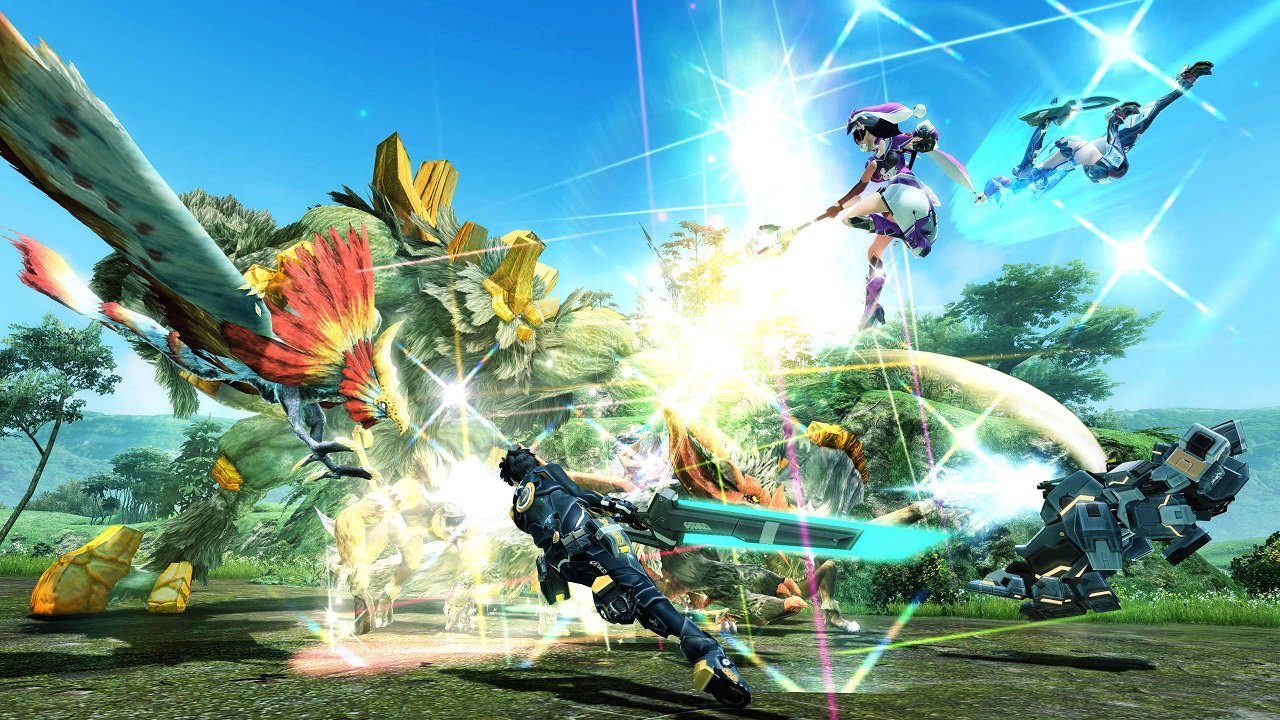 Recommended for Humans, Newmans and Deumans

Has someone made a Phantasy Star Online podcast called HUcast yet? Get it?

Aw man, I can’t believe this game is finally out. 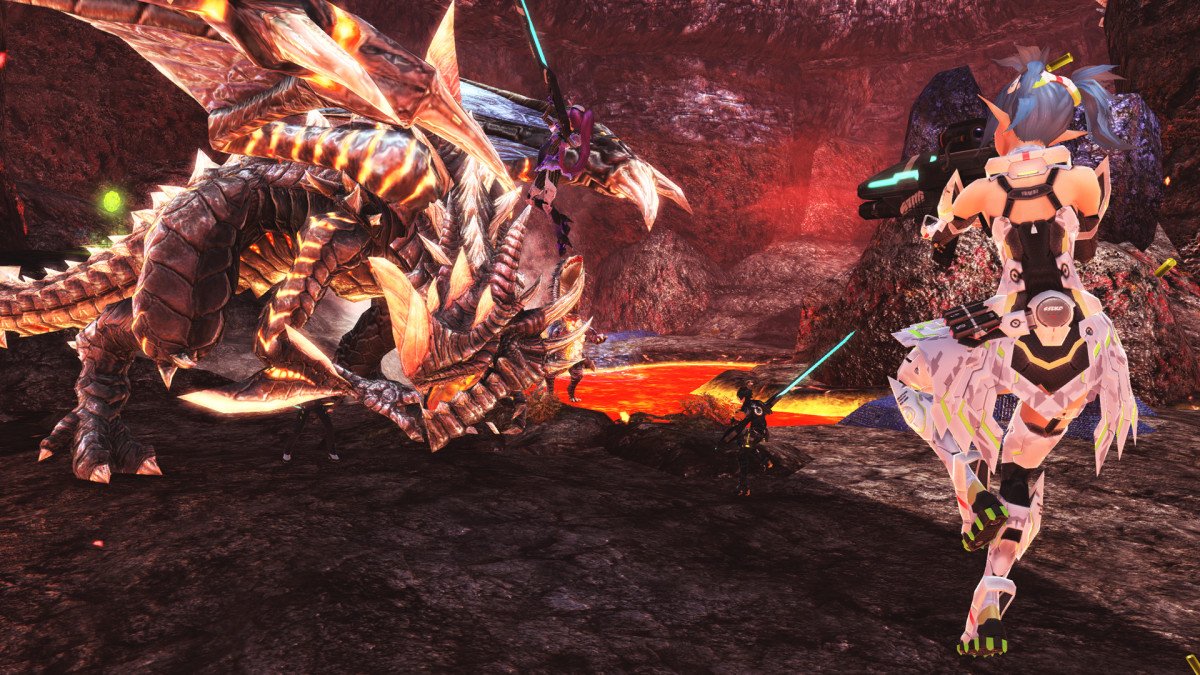 So what’s all the hubbub about? Why have so many people wanted Sega to localize a game that’s nearly eight years old at this point? To answer that question, let’s mentally travel to the Dreamcast era. Here’s upbeat time travel music to set the scene.

Back in the year 2000, the online console scene was in its infancy. Although several games did dabble in it (shoutout to Tony Hawk’s Pro Skater 3 on PS2), it wasn’t until Xbox Live sashayed across the stage in 2002 that it really started to catch on from a publisher standpoint. Heck, the original PSO even greatly benefited from the eventual 2003 Xbox port, which proudly required an Xbox Live fee on top of a “Hunter’s Pass” monthly fee: I remember subscribing to it!

Through the act of camaraderie, a hell of a lot of bright charm, and an expansive loot system, PSO encouraged people to shine with their own personally created avatars and join a community that so many folks just hadn’t experienced up until that point. The fact that it was a rare console action RPG also made it both endearing and stylish.

So what is Phantasy Star Online? Well it’s a lot like old school dungeon crawlers, but with MMO lobby elements and bright blue Sega aesthetics. In PSO 2, which is very much in the same vein as the original game (just greatly expanded and free-to-play), you’ll choose between several races and classes, then dive into various generated sandboxes with different themes: tropical forests, lava worlds, technological underground ruins, stuff like that. In theory, PSO 2 doesn’t have the same allure that it once did in this age of myriad competitors, but it still holds up for a certain kind of audience.

Because of the action-centric flow, PSO 2 is very easy to pick up. It doesn’t really matter what class you choose, whether it’s a hulking sword-wielder or a laser-pistol-toting rogue; being able to jump, dodge, attack, and trigger abilities in real-time with a button press is as intuitive as it gets. The tutorial does a decent job of setting the stage for its sci-fi theme (in which you are a member of ARKS, a benevolent space organization) and will acclimate new players nicely to the literal rhythm (pressing buttons in time does more damage) of PSO‘s combat system.

Once you really start to take notice of everything around you though, it can get extremely daunting. The lobby is actually comprised of multiple locations, all of which offer countless shops. There’s a casino and a cafe filled to the brim with optional sidequests that grant massive benefits. Early on you can re-roll your character and choose a new class, juggle items to feed your MAG (a floating companion) to min-max your statline, and discern what skills to take next in your ability tree. Rewards can be buried within menus, of which there are many in the game’s frankly tiny-text-heavy pause screen. Even as someone who has played MMOs since Ultima Online, it’s a lot at first.

If you’re willing to put in the time and learn those systems, PSO 2 can be extremely rewarding. Again, the moment-to-moment gameplay is engaging, and there’s a class out there to suit any potential action playstyle. If you’re a fan of parrying, the katana might be your jam, with the option to execute perfect defense counters. On the flipside, ranged combat allows players to take potshots at weak points directly with an aiming system, and weapons like the Gunblade (thanks Squall) cover everything. Just like the sheer number of cosmetics in this game, which we’ll discuss momentarily, there’s a lot to ponder strategically. You can thankfully try every class at will in training mode and swap freely between them, leveling classes on the same character.

While you can grind for loot to your heart’s content, everything story-wise is broken into narrative chunks, which makes for great “just one mission” sessions. PSO 2 is delivered “episodically” as a live service game, but with the delayed localization, you’re basically getting years of free updates at all once. There’s a massive story to explore that frequently relies on common media tropes, but also contains plenty of growth for its growing, unique cast. Zones have weight to them, with heavily-stylized themes and gigantic bosses that you’ll remember after you’ve downed them. The Xbox One edition also benefits from very fast load times (with a unique visual style that bolsters its sometimes dated effects), which gives it a leg up on many modern games that buckle under scrutiny.

The more you play PSO 2, the more you’ll appreciate it. There’s an insane amount of customization involved (free or otherwise), so every single player character feels different. Speaking of cosmetics, this is a free game, but there are lots of ways to spend money. Outfits, boosts, special items, services like trading, and personal quarters for 30 days are the common premium options, as well as classic MMO services like salon passes to change your appearance.

Thankfully, it’s not exactly in your face outside of brief loading screen pictures, and you need to dig into menus to really find them. There’s lots to do for free. Cosmetics play a big part in some players’ routines (oh man how I love having “dungeon gear” and “chatroom garb” options), but getting every class to level 75 (or 95 in some regions) is free, as is the ability to join a guild (alliance) and hang out in their quarters.

Another thing you need to keep in mind is that PSO 2 is predicated on repeating content. While some dungeon crawlers might have you trek back through a familiar area to move the story forward, PSO‘s menu-based level selection necessitates replaying familiar zones for better gear or experience boosts so you can take on the next boss. Here’s the thing though: PSO 2 has been out for so many years, there’s plenty to do without too much overlap for hours on end. You can also solo content with NPCs, or join random games via matchmaking. At no point did I feel like I was alone in the past several weeks I’ve spent with the Xbox One edition.

Phantasy Star Online 2 is a difficult game to assess and a hard sell for a lot of people. It can get repetitive and the anime aesthetics aren’t for everyone. But like many expansive online projects, the opportunity is there to really get sucked into a new and exciting world. Plus, it’s on a console, making it more accessible; true to the original spirit of PSO.

[This review is based on a retail build of the free-to-play game acquired by the reviewer. No additional content was provided by the publisher.]