A slice of fried gold

As Destructoid’s resident JRPG critic and a vocal fan of Atlus’ Shin Megami Tensei franchise, I get questions about the Persona series all the time:

What’s the big deal? What is the story about? Which one is the best one?  Do I have to play all of the games in order? Are they all 100 hours long? What’s with the guns to the head?

‘Where do I start?’ is the question I get most often. And I usually reply with something along the lines of ‘any of them are fine.’ But with the release of Persona 4 Golden my answer has officially changed.

If you’ve never played a Persona game before, start with Persona 4 Golden, as it’s the most enjoyable release yet. 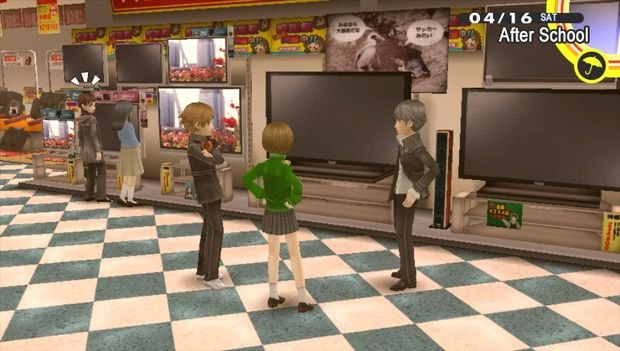 [As Persona 4 Golden is largely the same game as the 2008 PS2 release Persona 4, please refer to our original review for story and gameplay specifics.]

Just as before, you’re a transfer student from Tokyo, coming to the podunk town of Inaba as the new kid at Yasogami high. But you don’t have to worry about sticking out as the center of attention for long as some really strange stuff starts going on in school and around town. A gruesome killing and several more murder attempts somehow has you and a group of new friends working to find the culprit.

This murder mystery soon goes supernatural when an urban legend about the Midnight Channel, a television program that shows the dark side of people, turns out to be true. Almost by mistake you and your friends end up entering an alternate dimension through a television in an attempt to save victims and fight back darkness with your newfound ability that lets you call forth your “Persona.”

Persona 4 Golden is still the turn-based RPG it was back in 2008, and almost nothing has changed with this port as far as the core gameplay goes. You’ll still travel in a party of four, ‘crawling’ through randomly generated, multi-floor dungeons, taking on “Shadows” in turn-based battles where you can call forth your Personas to aid you in the fight. You’ll use them to learn and then exploit enemies’ elemental-based weaknesses for attack advantages, which makes for a hooking rock-paper-scissors kind of battle system. 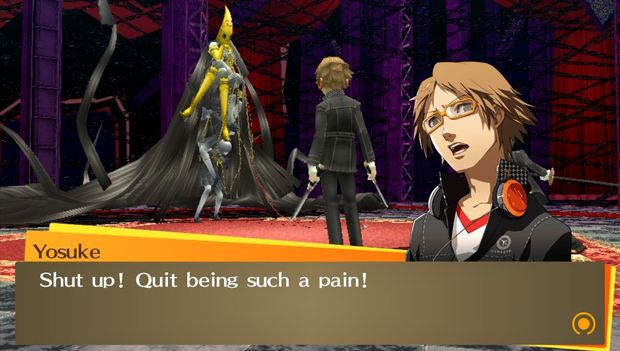 As with all of the series’ games, a major aspect of the gameplay is the summoning system, which lets you find and collect even more Personas to use in battle. With the ability to alter their traits and merge them to create totally new ones, RPG standards like weapons and armor take a back seat. The summoning system of the Persona games has been likened to Pokemon’s monster collecting and, while they’re similar in the collection aspect, I feel Atlus’ work is quite a bit deeper in scope, and certainly more adult. For being engrossing they’re on the same level.

The social and dating sim aspects of the last two franchise games are a primary draw for series fans, and it’s here that this port has some interesting updates. Persona 4 plays out over the course of a year, with the player making choices for the daily life main character. What he eats, where he works part-time, how he answers test questions at school, who he hangs out with after school, and even what girl(s) he flirts with are up to you as the player. Social Links from these interactions grow both friendship bonds and the power to fight in dungeons, making for a very interesting way to progress RPG gameplay, and giving a dual meaning to the term ‘level up.’ I’ve talked to gamers that hate dungeon crawlers but still love the Persona games for their consuming and sometimes obsessive social sim elements. I’m sure you’ve heard good things.

Persona 4 Golden steps it up with so much more to become immersed in. Atlus packed this game to the brim with new content, but they interlaced it with the existing content so seamlessly that all of it feels like it was always there. To list and address it all would make this review prohibitively long, and it might spoil some surprises. We’ll cover the highlights. 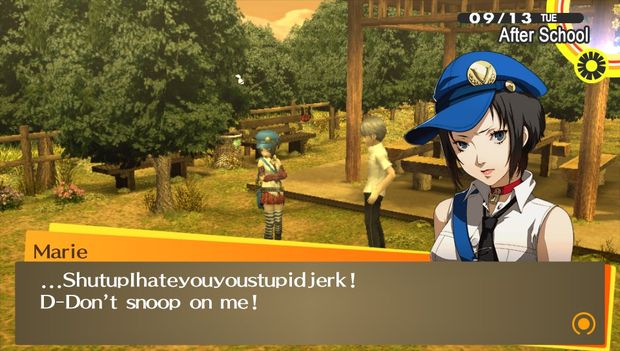 A major addition is a brand new character named Marie. While certainly cute, she’s also brash and cold, making her a bit difficult to get along with at first. But her mysterious background, naive manner, and odd day job will provide those that have already played Persona 4 with an interesting new character and story branch to explore. Marie is an available Social Link, meaning that players can befriend her and even go out with her, just as they could in the previous version with key characters Chie and Yukiko. Fans will be pleased to know that her story is quite deep, and nicely woven into the existing narrative. On dates you can even take her to some of the new locales of Persona 4 Golden.

While you’ll mostly retread the country streets of Inaba in Golden, there are a few new locations to visit with your friends. The neighboring city of Okina is now explorable, and with it comes new shops. Series fans will surely appreciate visiting a branch location of Persona 3‘s Chagall Cafe in Okina. A new clothing store lets you buy non-stat affecting outfits (not armor) for every character. These outfits change characters’ appearance in dungeons, and are freely changeable in a new equipment slot. While it doesn’t affect gameplay, it’s fun to see Kanji wearing a clown nose while running through a dungeon, or Chie wearing a swimsuit in battle.

Okina City is reached by a new mode of transportation in Persona 4 Golden, motor scooters. I won’t ruin your enjoyment of new story sequences that tie into just how this new form of transportation is introduced to the gang by spoiling them, but I will say that they were quite funny, and do tie into the game’s social stat building system. Once acquired, the scooters can be driven around town and beyond to explore. 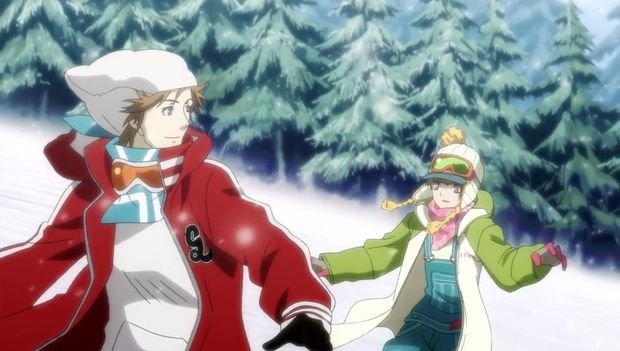 Plenty of other new story elements have been worked into the storyline to entertain return visitors to Inaba. Again, I won’t spoil the experience, but new school events, trips, locales, holidays and more have been added to the existing content. There are even more Social Links to explore and max out. Returning fans may be surprised to hear that Social Links with detective Adachi are now available. You can even sneak out of the house after dark to explore the town’s limited (and sometimes strange) night life. And I love that there’s a strange new predisposition with steak. Thankfully, new animated cutscenes accent and support many of these new story bits. Atlus did a fantastic job with these many additions, making Persona 4 Golden feel more like an expansion than a port. 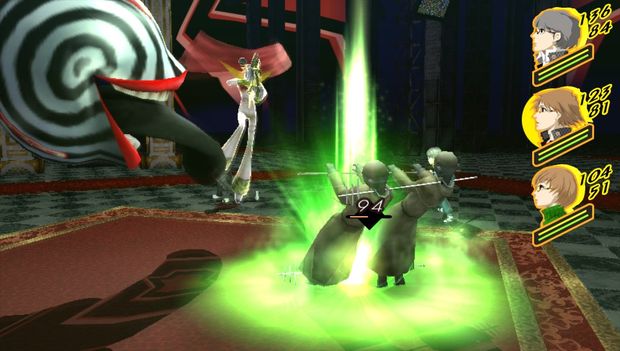 In the dungeons, in battle, several more additions make Persona 4‘s already outstanding gameplay even better. New Personas can be acquired, and you can now decide which abilities come from parent Personas during fusion. New team attacks have characters tagging up in battles for flashy extra hits. The post-battle card game Shuffle Time has also seen some upgrades that make it more like a mini game than before, and it adds new perks and power ups to help you through dungeons. And if these changes aren’t enough for you, new difficulty levels have been added to expand upon the original 3 offerings, making the game even harder or easier.

The overhauling continues in the presentation department, with visuals that make Persona 4 Golden look more like a current generation RPG than a PS2 port. It takes full advantage of the Vita’s outstanding 16:9 OLED screen, with visuals and colors that really pop. Character art and models, and scenery have been updated, and the UI and overall presentation have been tweaked to better work as a Vita game. And as always, you’re in for an audiovisual treat, with even bigger helping of Shigenori Soejima’s beautiful artwork, and a few new songs from series composer Shoji Meguro.

New voice work expands on the story, and it sounds like new actors have been worked in for continuity’s sake. Chie seemed to wear on me after a bit, but that may be because I prefer her Japanese voice. Sadly, that choice is not available in Persona 4 Golden.

For the first time, a Persona game gets some online connectivity. Upon starting or loading a saved game, you will be asked to connect to online servers. A new Vox Populi feature takes your social choices and compares them to those of other connected players. This is not unlike the post-level answer results given in Atlus’ Catherine. And while I wasn’t able to try it out due to playing before the game’s official release, the SOS feature promises to be a lifesaver in dungeons where you’re on your last leg. A call can be sent out to other players to request help when your party is barely hanging on. 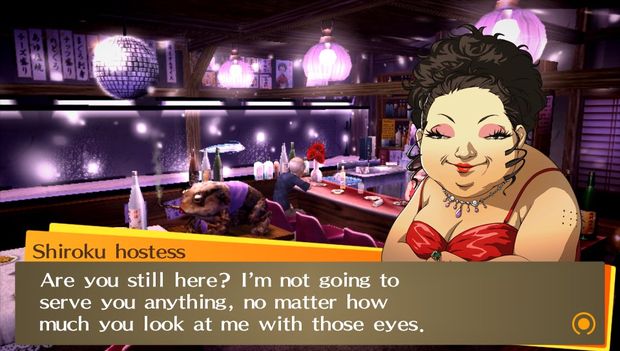 Any Persona devotee will be thrilled with some of the bonus content Atlus has included in a new television feature. Using the set in your bedroom (or a menu option) you’re able to view a page of television listings and select programs to enjoy various video clips and audio content. Songs from the fantastic Japanese Persona Music Live concerts can be viewed, as can introductions and commercials from past Persona series games. Another ‘channel’ lets you enjoy Persona music, jukebox menu style.

If you’re a series fan, there’s absolutely no excuse for missing Persona 4 Golden. The world has been enhanced and expanded so much that it feels like a new title, and that’s coming from someone who has finished Persona 4 a couple of times beforehand. What started out as a pleasant revisit turned into a new adventure, with new story bits and dialogue constantly surprising me. You will not be disappointed.

For gamers curious about the franchise and looking for a way in, Persona 4 Golden is easily the best place to start, as it’s the best looking and playing Persona game yet. And if you don’t have a Vita yet, this is probably the best reason yet to get one.