Fans of soul-crushing platformers like Super Meat Boy and Spelunky will feel right at home within the sadistic circus rings of Penarium. The 2D arena survival-fest puts players in the shoes of a young farmer named Willy, who has been kidnapped and forced to fight for his life within the various stages of a violently chaotic traveling circus.

At its most basic, Penarium has Willy jumping from platform to platform to complete a seemingly simple goal. Things quickly become more complicated once traps and complex objectives are introduced to the game. It slowly turns up the heat until levels suddenly become surprisingly complex. This somewhat overwhelming difficulty put my patience to the test, but in a good way. Even after failing miserably at a deceptively easy task and hurling obscenities into the air, I still found myself coming back to Penarium for more. 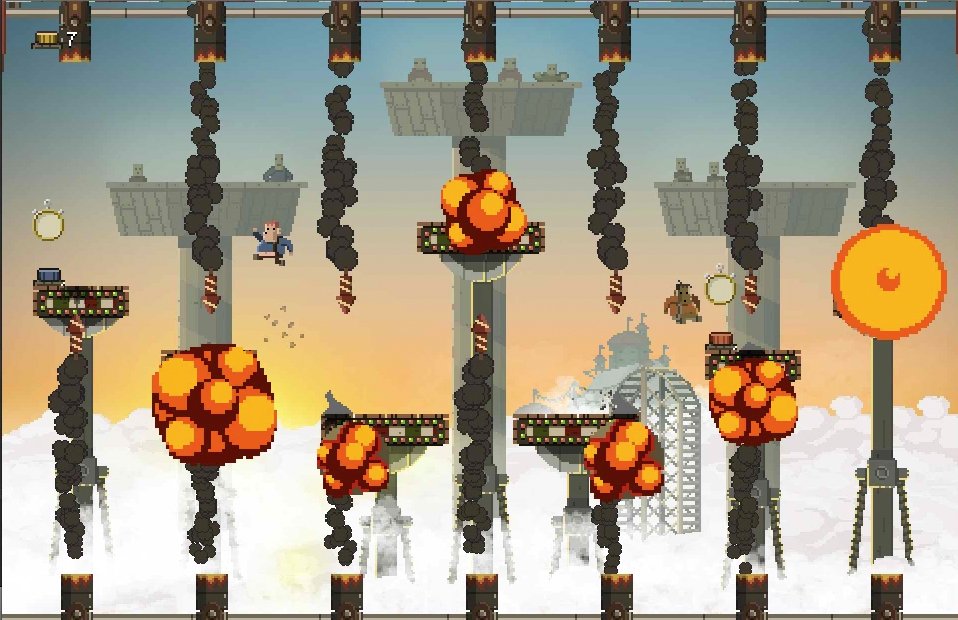 The controls, like much of Penarium, are outwardly straightforward but still offer a lot of room for unique play-styles. Willy is only able to run left and right and can also double jump in the air. PC players have the most freedom here and can use WASD, the arrow keys, or some combination of the two to get around. But know that Penarium is brutal, no matter what platform it’s played on. Unlike similar titles that favor a gamepad, the game has the somewhat unique distinction of being equally playable on both controllers and keyboard.

Though Penarium offers three game modes, its campaign is easily its meatiest experience. The story is told through thirty levels spread across three different arenas. Things start slow and simple, but quickly evolve into chaos. Different objectives, such as breaking barrels placed throughout a level or popping balloons in a specific order, become increasingly difficult as a myriad of different traps enter the equation. Homing missiles, deathly icicles, sticky platforms, barrel-stealing birds, terrain destroying electricity, or a roaming swarm of bees could all complicate whatever task Willy has to complete. Overall there aren’t a ton of traps in the game, but it is fond of throwing multiple traps at Willy at once to keep things interesting. 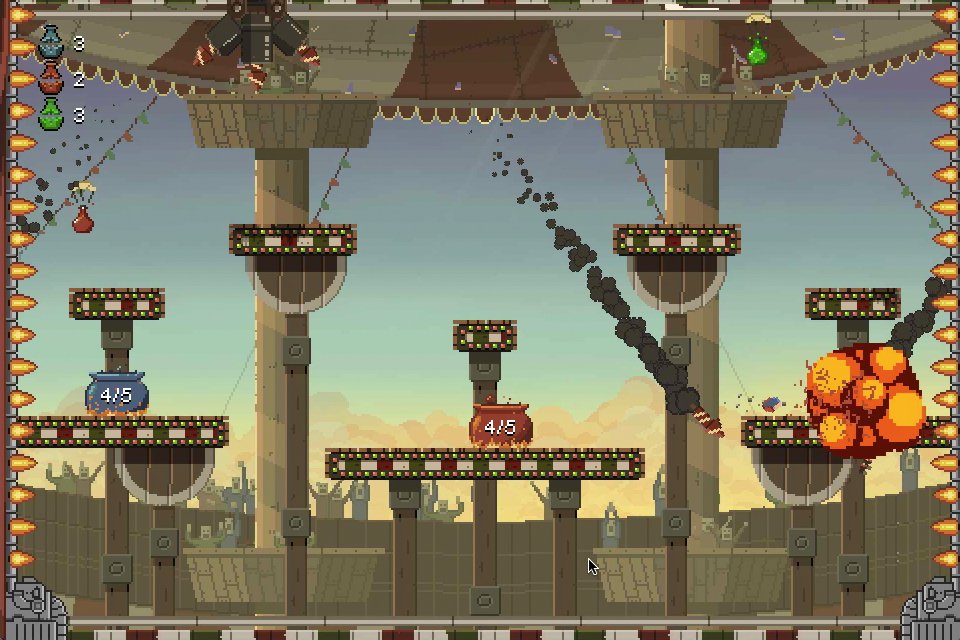 Conquering one pair of traps isn’t enough after a few levels. Eventually objectives will have you collect thirty barrels, but rotate in a new set of traps every five. This is where the unforgiving element of Penarium comes in. Dying on the final set of traps, maybe even seconds before completing the task, kicks you right back to the beginning of that level. There are no checkpoints between trap-sets, and no rewards for making it so close to victory. The difficulty is punishing, but at the same time never feels impossible. Persistence, skill, and a tiny bit of luck are all necessities if you want to clear all thirty levels.

Campaign offers players a variety of fun tasks to conquer, which makes it all the more of a shame that multiplayer shares none of that uniqueness. Two players either compete or work together to capture a series of randomly placed buttons, each with their own trap combinations to overcome. The whole package isn’t terrible for the first few rounds, but after a while it becomes apparent that repetitive multiplayer mode lacks that stressful charm that Penarium built its campaign on. 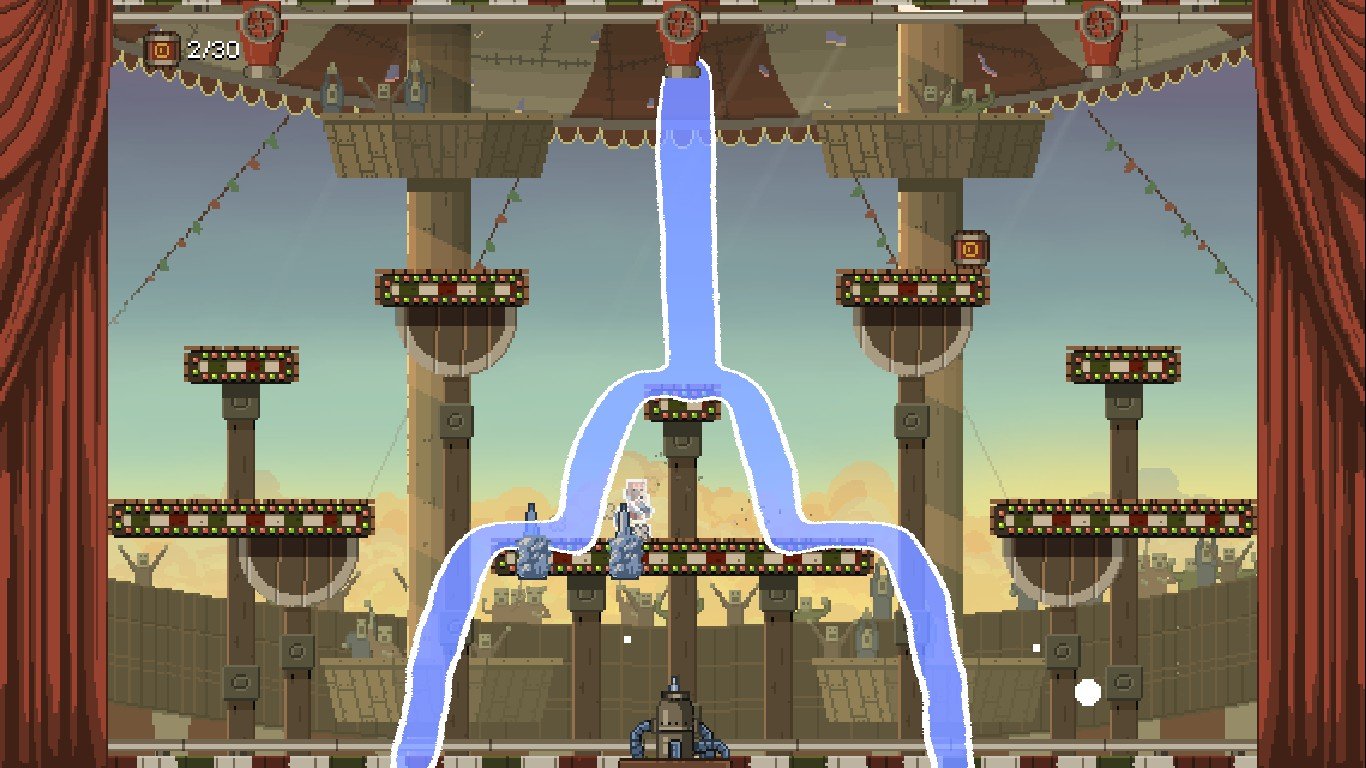 Arcade mode is a somewhat fuller experience, but still falls short when compared to the campaign. Playable on any of the three arenas, arcade mode endlessly tasks you with collecting as many barrels as possible before an eventual death. Traps rotate out every five barrels to keep things interesting, but it still had a hard time holding my attention. Even with the arcade-exclusive ability system that exchanges coins for random use skills, the scoreboard focused mode fails to offer anything to really keep players engaged.

Penarium is incredibly fun, but could have been even better if the multiplayer and arcade modes had taken some inspiration from the campaign. But even then, what’s left is overall a fantastic experience. The game is difficult, but I haven’t found myself so lovingly furious with a game since Spelunky. It works well within the scope of its own mechanics to create a game that stays consistently challenging, without ever feeling truly impossible.