Hand it all over

About two years ago, I fell in with a bad crowd. A gang of thieves that would conspire together to rip innocent people off and goad each other into more and more brazen and dangerous crimes. It was a great time. At our peak, we were working on a new heist every night and amassing a fortune in ill-gotten loot.

But, all things pass. Eventually the thrill of the chase dulled, our escapades became routine instead of daring, and one-by-one our attentions waned and we drifted on to other things. I still think back fondly to those nights of Payday 2. With the release of Payday 2: The Big Score, a bundle of the Crimewave Edition along with all the previously released DLC packs up to the end of 2015 (you still need to buy DLC from this year separately) and some new updates, I wanted to see if I could recapture that old magic. Sadly, while this massive pack provides a brimming dufflebag worth of content, it fails to address the problems that have plagued the base game since launch. 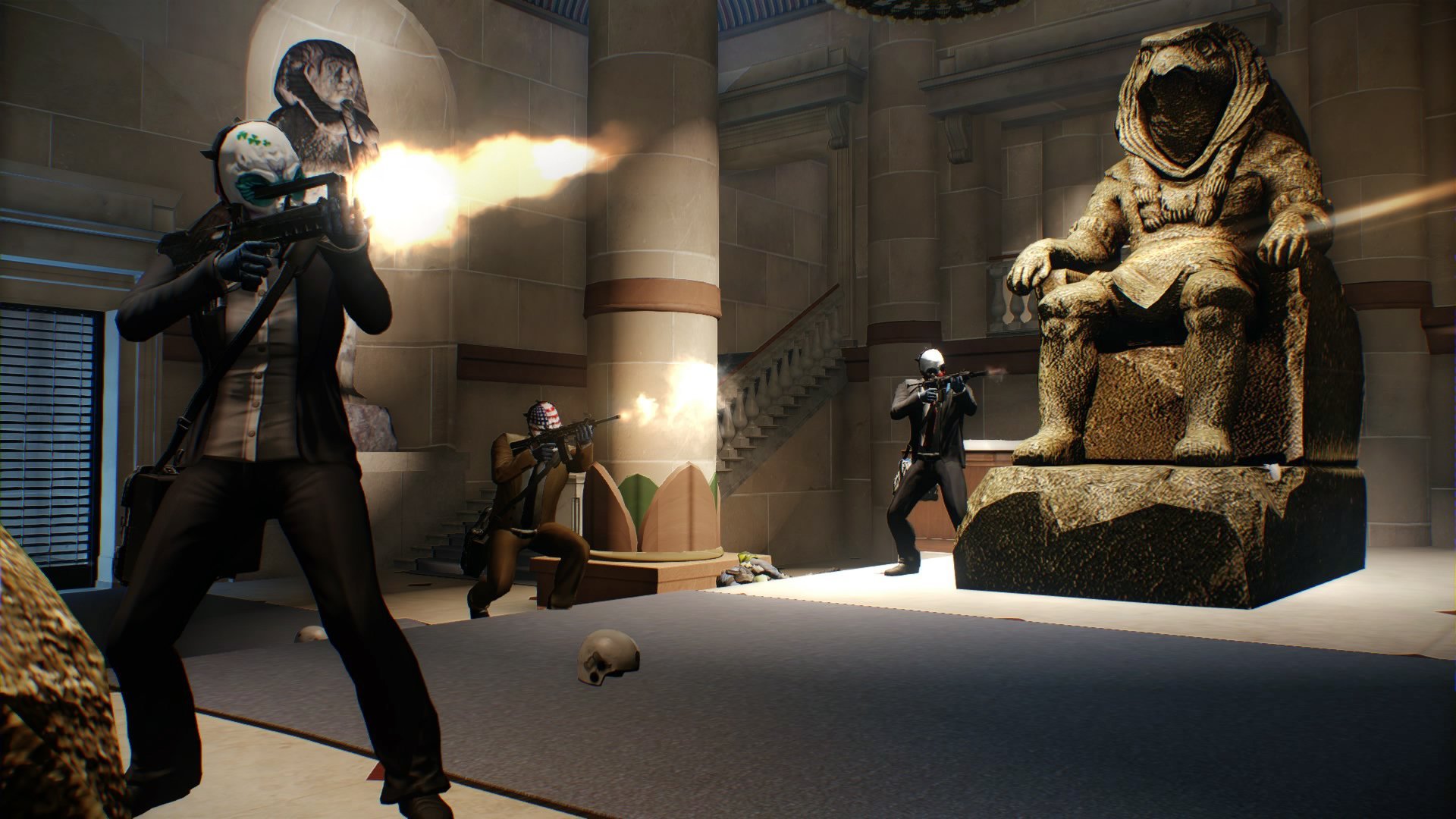 Getting back into Payday 2 was a little rough for me. When I stopped playing the PC game, I had a fully developed character and a reliable crew of Steam friends to call upon when I was in the mood for a heist. Re-starting from scratch on PS4 (there is no way to transfer your progress between platforms) and playing with randoms instead of trustworthy partners in crime drew just how much of the game is gated by grind into stark relief.

Payday 2 is a game with surprising depth. When you get into the later missions and work with competent teammates who are into it, you can get into some straight up Thomas Crown Affair business. Complicated shenanigans like hacking security networks, jamming radios, and expertly lifting scads of loot out of a crowded building without raising an eyebrow are all possible and thrilling capers. These are tense, complicated heists that require communication, excellent teamwork, and can still spin into a frantic firefight at the drop of a hat if even one person slips up. At its best, Payday 2 is a hell of a multiplayer game.

But, you have to work to get to all that cool stuff. Until you clock in enough time to climb the various class skill trees, perk decks, and unlock all the neat gun attachments and gear you need to pull a professional job, you have to slug it out in the gutter. For the first several hours, you’re mostly bumbling around breaking windows, pistol-whipping hostages, and cursing out your drill as it sputters to a stop yet again. Low-level characters might be dressed like the professionals in Heat, but make no mistake, they share more in common with the Wet Bandits than anyone else.

I’m not saying the old smash and grab isn’t fun (I mean, pistol-whipping), but it can be repetitive and shallow as those “early” hours drag on. I remember thinking the slow start was a disservice to the game three years ago, and it’s a shame Overkill hasn’t figured out a more engaging way to welcome new players since then.

The loot and progression system of Payday 2 was a bit of a mess when it originally came out and it’s only become more snarled over the years as additional systems have been bolted on. Character skills are gated behind class trees that specialize in one aspect of heisting or another (Masterminds control hostages and keep the crew going, Enforcers are heavy hitters and vault rippers, Ghosts specialize in stealth and high-tech gadgets, etc.). Each tree requires a messy combination of skill points (gained by leveling), cash, and prerequisite points spent to unlock. Once you reach level 100, you can essentially prestige to a higher infamy level to unlock unique cosmetics and titles at the cost of all your cash.

But, that’s not all. There is also your Perk Deck to consider. These are sets of escalating passive perks that you can unlock with converted experience points. Several of these bonuses are quite good, but you can only equip one perk deck at once, meaning you’ll probably want to cultivate a few different decks and switch between them as missions call for it.

Weapons can be purchased with cash, but often carry level prerequisites so new players can’t just rush the most powerful weapons out of the gate. They also take up inventory space that while generous, eventually runs out and needs to be expanded with yet more cash. Attachments and mods (of which there are a dizzying array) are earned as random rewards in post-mission item drops, or through DLC side-objectives (the biggest of which are the Gage Courier drops which can essentially be farmed to fill out an inventory of decent attachments). The random unlocks can make filling out your dream kit quite a grinding slog, so paying attention to the farmable mods is highly recommend. 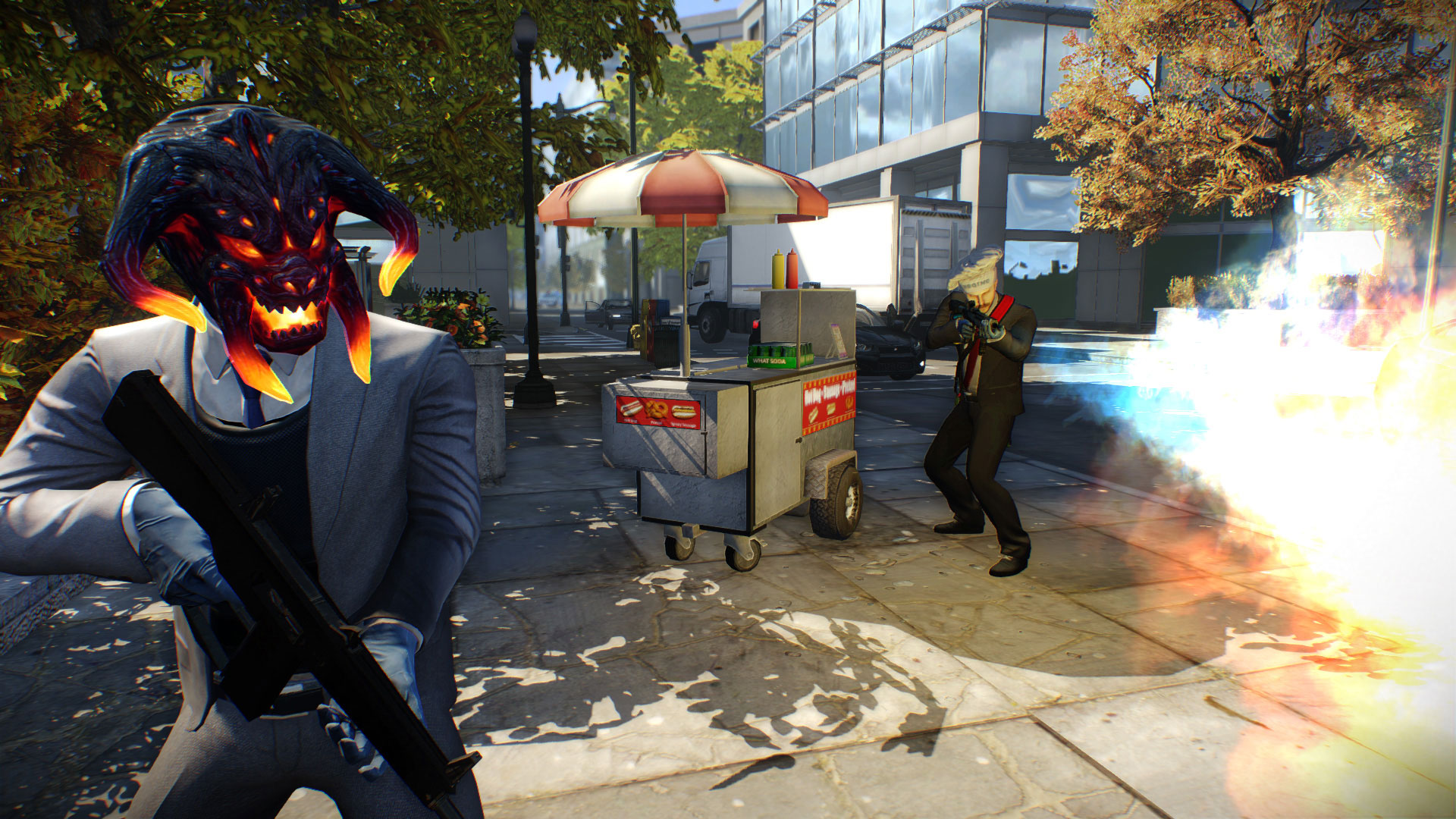 Similarly, masks, materials, and patterns are unlocked through random drops and then assembled with cash. Thankfully, The Big Score comes stocked with all of previously released DLC and event-themed masks, so there are plenty of options to choose from the start. But, perfecting the garish chrome-pink off-brand Cobra Commander mask of your dreams will still take some time.

The downside of all this complexity is that you practically have to take an extension course to figure out how all the different parts come together to build a decent character. The upshot is a massive variety in character builds, weapon choices, and tactics. There is a lot to play with and customize in Payday 2, even if much of it requires a grind that wouldn’t be out of place in a free-to-play game.

The Big Score contains almost all of the previously released DLC and item packs up to the start of 2016 that were sold piecemeal to PC players. There is no shortage of characters to choose from, including cameo characters like John Wick, Jacket from Hotline Miami, and Bodhi from Point Break (sadly the lame one from the 2015 remake and not Patrick “Dirty Dancing” Swayze). There is also a wealth of levels and heists to take on, including goofy levels that were previously tied to limited-time events, like the Halloween “Lab Rats” mission that shrinks the crew down to the size of Micro Machines scurrying around the counter of a meth kitchen. It’s great to have these options, but also a little bewildering if you haven’t been paying attention to the past three years of Payday 2‘s ongoing development. 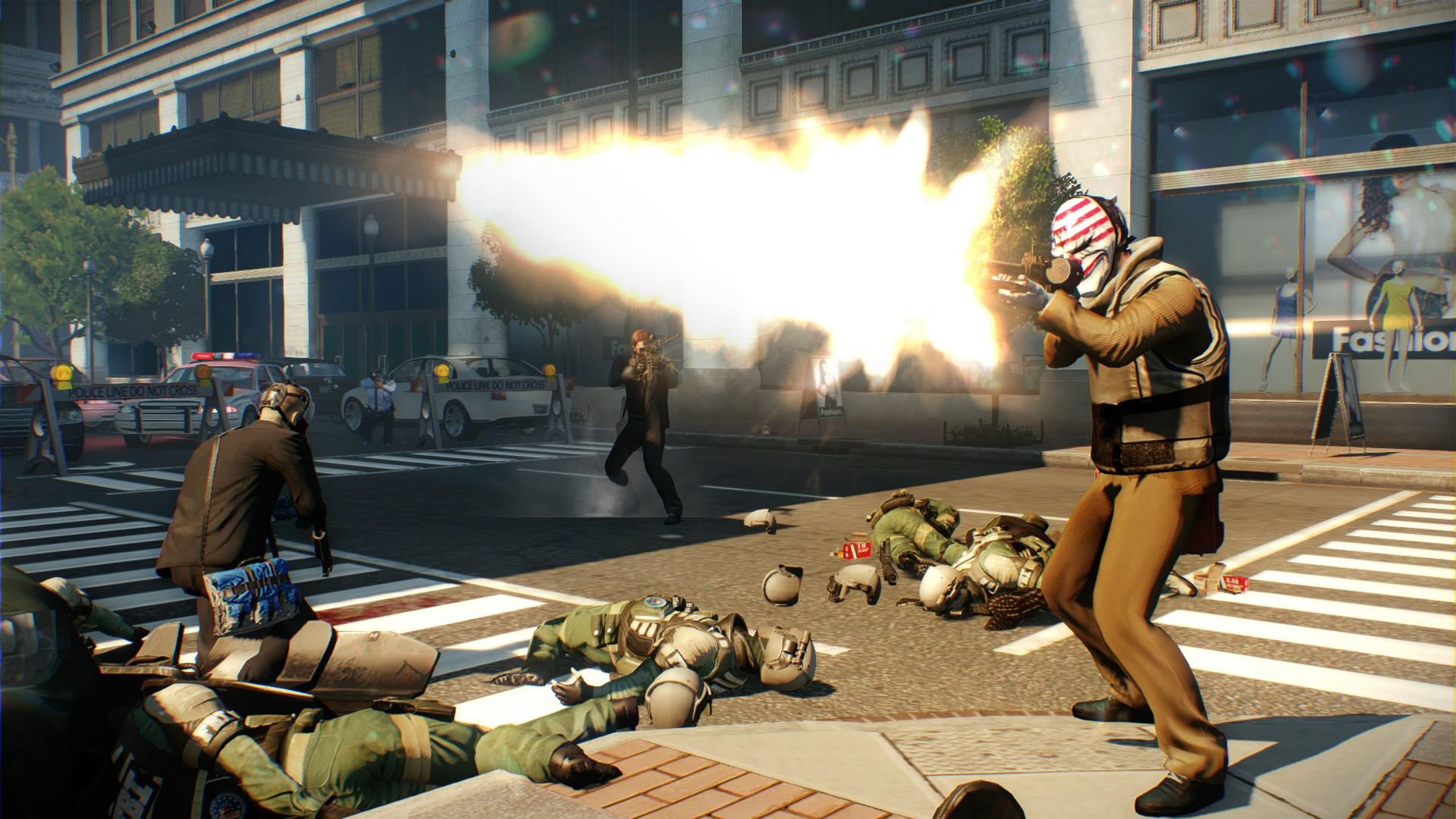 Speaking of those three years, The Big Score is unfortunately showing every single one of them. While not exactly a graphical showpiece even at launch, the flat environments and locked 30 FPS really stand out on the PS4. It’s also disappointing that the A.I. teammates are still slightly dumber than a cinder block with a concussion. Three years to work on them, and A.I. teammates still just stare at sacks full of priceless gems, completely uninterested in helping you haul them to the getaway van, or stand beside an overheating drill without even attempting to unjam it. Most of the missions are functionally impossible without some teamwork, so these lobotomized bots and the option to play solo might as well not even be in the game. It’s shameful that such a basic element has been left in this sorry state.

I also have to mention the buy-in price for the bundle. If you never picked up the Crimewave Edition for either of the current-gen consoles, $49.99 isn’t a bad price to just jump in and play with the majority of DLC that’s been released. However, if you’re a long-time fan who picked up Crimewave when it first came out, and God forbid some of the DLC, the $39.99 upgrade bundle is just insulting. At this point we’re all used to seeing early adopters getting screwed over, but this seems like a particular low-blow for fans who have stayed with the game. 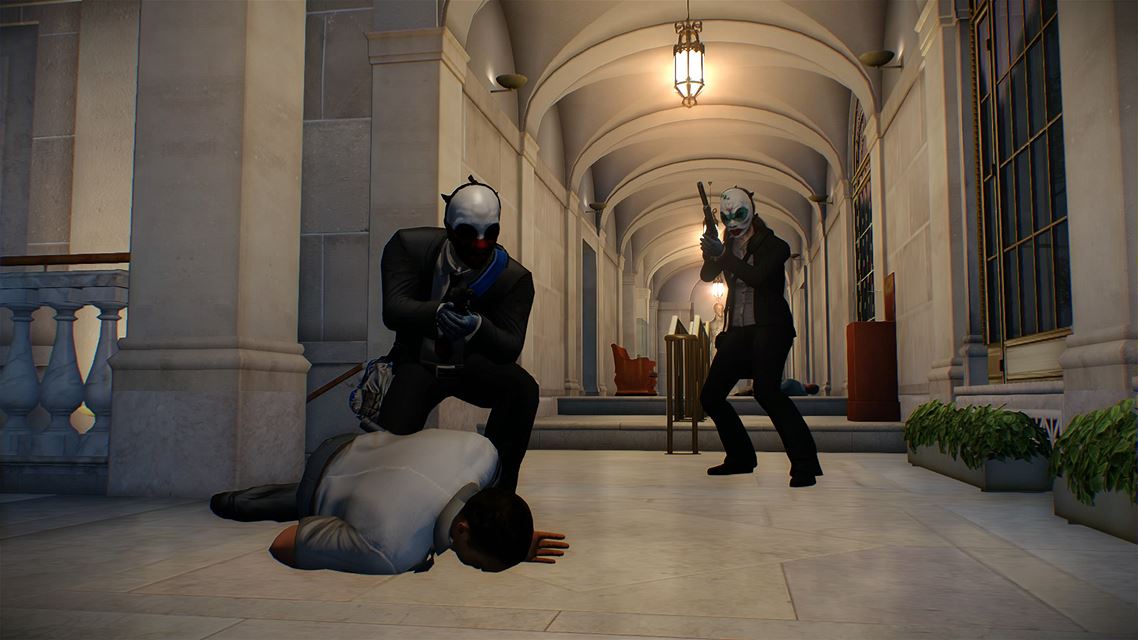 Payday 2 when it first launched was a flawed game with a lot of heart. It was slow to start, subjected players to a punishing grind, and despised would-be solo players. But, it also featured some fantastically imaginative missions, great opportunities for nail-biting teamwork, and solid gunplay.

Three years on and re-re-released, those flaws are harder to ignore and those qualities not as impressive. Despite dozens of DLC packs, expansion missions, and bonus characters, the core problems with the game have been left unaddressed. Overkill spent three years bolting on fancier spoilers, lights, and hubcaps when what it really needed was an overhaul of the jammed-up transmission. There is still fun to be had with Payday 2, the high points of the game are still fantastic, but at this point it’s hard to justify trudging through all the annoyances and hassles to get to them.

If you never got the chance to strap on a mask and make some dirty money, The Big Score might still be worth checking out. If you’re a seasoned criminal wondering if it’s time to get back into the life, you won’t find much to pull you back in.