I Walk the Line(s)

I can hear the earth speak. It cries out with a low rumble, begging for blood to anyone who knows how to listen.

I have seen Death. Or at least one of its faces. I have naively pushed back against its advances like only a human can. Death is hungry, just like the earth.

I have made mistakes. I have damned those I once called friends. I have uncovered secrets and glimpsed knowledge and found that there is a line between folk legend and hard science that can unify people or tear them apart.

I have survived, and I have died, all in twelve days. In Pathologic 2, contradictions don’t just exist; they flourish. Like a half-remembered nightmare, Pathologic 2‘s eerie atmosphere and surrealist tilt work to keep you in the dark. But when it’s all said and done, the details that linger are always the most unnerving. 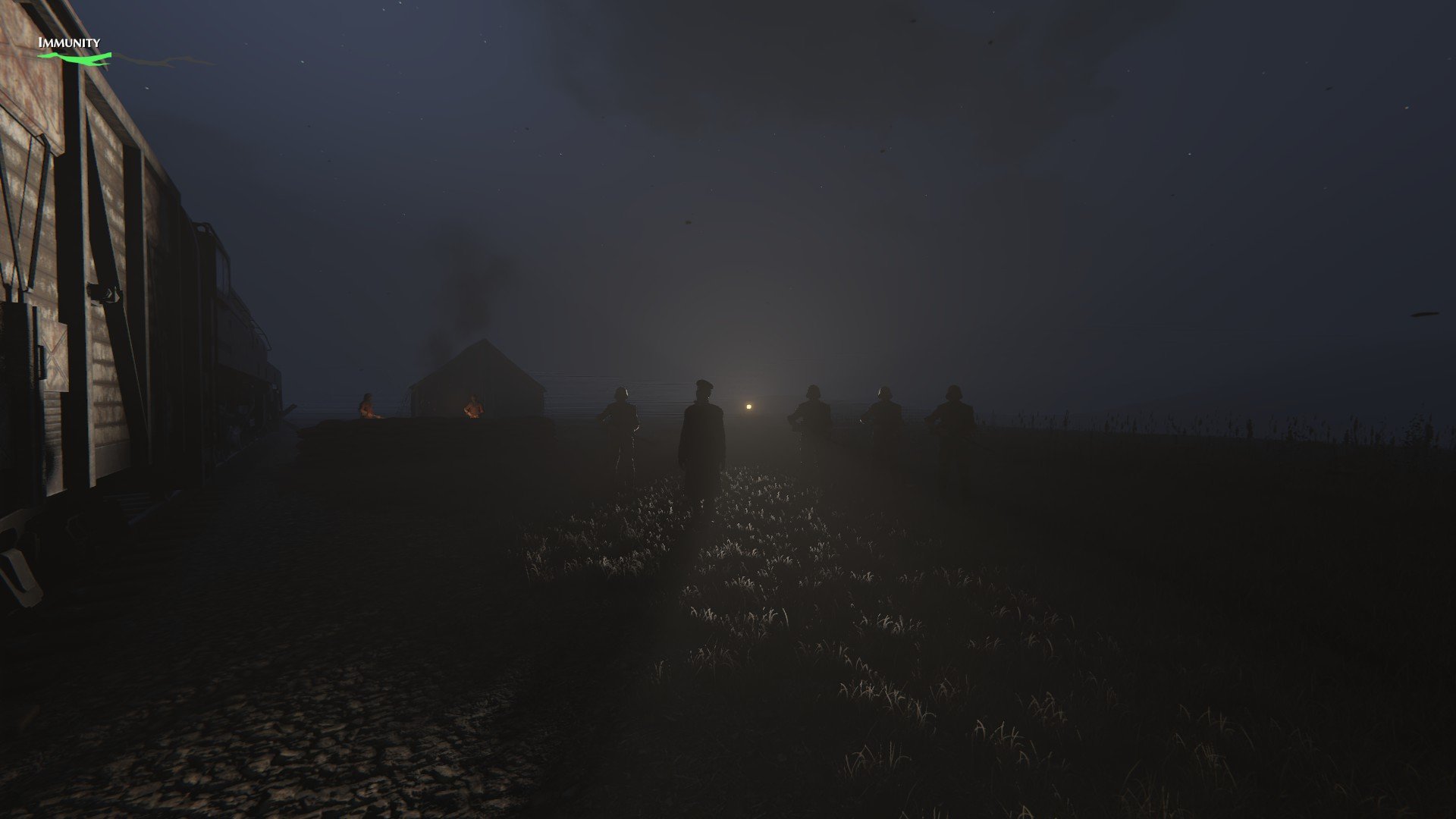 Twelve days. That’s all you get in Pathologic 2. As Artemy Burakh, players have less than two weeks to cure a plague ravaging their hometown. It’s no small task, especially considering that the epidemic is unpredictable and unforgiving. No one that’s infected can survive for long. And no one can seem to avoid getting infected.

So in the simplest terms, Pathologic 2 is a survival game set in a town that’s under assault from a mysterious illness. But a one-sentence description hardly paints a complete picture. Pathologic 2 is more like an interactive fever dream than anything else. One that mashes together brutal survival mechanics and surrealist narrative themes to create an uncompromising and opaque experience. You probably haven’t played anything like Pathologic 2. Unless, of course, you’re a Pathologic fan – this game is essentially a retelling of 2005’s infamous messterpiece.

Expect to spend your first few in-game days wandering through The Town, either scavenging for food in trashcans and derelict buildings or interacting with the locals. They’re a strange bunch. Everyone speaks in riddles and half-truths, often raising as many questions as they answer. At first, Artemy’s primary concern is finding the person responsible for his father’s death. You’ll chase leads and pull at different strings for a few days, adjusting to your new life in your old home. Something’s seriously wrong in The Town – everyone can feel it.

And then the plague strikes. After three in-game days, the Sand Plague rears its ugly head, throwing the town into chaos. Artemy’s homecoming should be a joyous occasion, but it’s more like a death knell. The plague moves through The Town’s districts, infecting hundreds of people at a time. Left unchecked, it will kill everyone. But Artemy is hellbent on finding a cure.

With each passing day, Artemy’s quest to stop the Sand Plague becomes more difficult. You’re thrown in a dozen different directions at once, tending to the infected, creating tinctures, and seeking out any information about the plague’s origins, all while racing against the clock.

Do you perform an autopsy and see if someone’s diseased kidney can hold the secret to a cure? Should you trade you last antibiotics for a much-needed piece of jerky? Or should you embrace the folk traditions of your steppe heritage and turn your attention to the earth? Pathologic 2 keeps you busy, and with an ever-ticking clock and harsh survival mechanics, you need to move quickly and confidently. 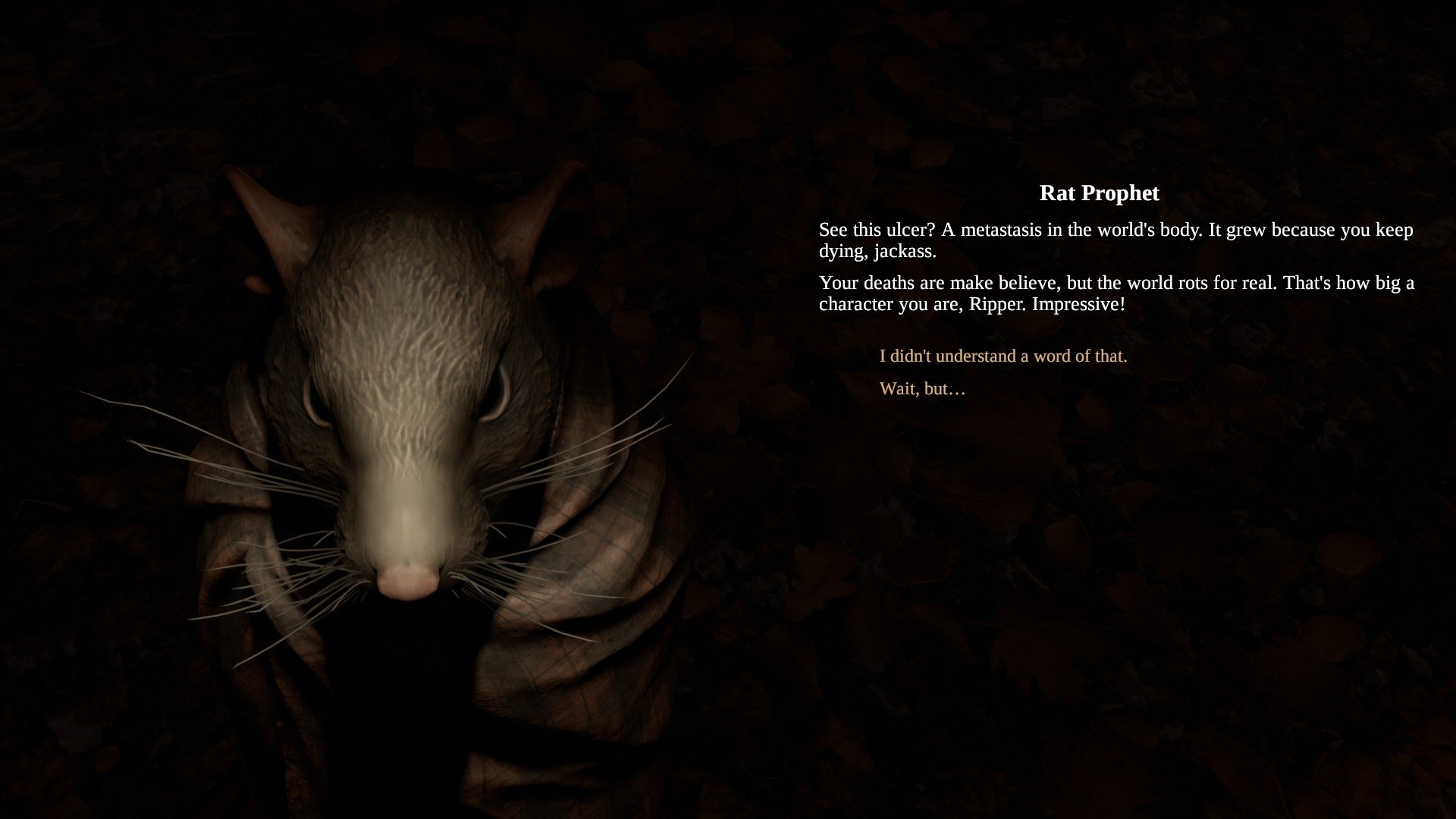 Each day is more taxing than the last. As the plague continues, food becomes scarcer. Important NPCs get sick and die. The cure always seems just out of reach. But when things are at their most dire, Pathologic 2 shines. Sure, it’s frustrating as hell to play as a character who is always starving or on the verge of collapse, but it goes a long way to match the bleak narrative. Every decision you make comes at a steep cost, either to Artemy’s well-being or the survival of others. There are no winners here.

In fact, you’ll likely lose long before you ever find the cure. Death isn’t reserved for non-playable characters. Artemy can – and will – die. But that’s not the end of the story; it’s more like a new beginning. Pathologic 2‘s metanarrative examines what it means to “play” a role. Each time you die, Artemy winds up on stage, facing a director intent on keeping his production going no matter what. He’s quick to recast a new Burakh but interested in making subsequent performances more dynamic. Each time you die, the game gets harder. You’ll get tired faster. Starve quicker. Death’s not the final curtain, but it is a pain in the ass.

Pathologic 2 is a surrealist drama wrapped in a survival game’s tattered clothes. It’s frustrating and haunting all at once. It’s also one of the most atmospheric games ever made. Every element of Pathologic 2 – the persistent plague, delightfully twisted dialogue, and punishing survival mechanics – come together to form an intensely memorable experience. Is it fun? Not really. Is it brilliant? Almost certainly.