Somehow, Path of Exile is simultaneously in its best and worst state. Every league, it just gets more bloated as Grinding Gear Games (GGG) adds previous league mechanics into the “core” game. As someone who has played in a pretty serious capacity the last handful of leagues, I enjoy the new challenges and additions as I come up with zanier and zanier build ideas.

But the new player experience is at an all-time low. I cannot seriously recommend people to just jump into Path of Exile today and enjoy what’s there. I’d recommend spending hours and hours performing some research first, and probably DMing me, and then tempering expectations before jumping into Wraeclast. As a result, this review will mostly be catered to those who have a decent understanding of the game, and ideally a conversation piece for others to share their opinions. 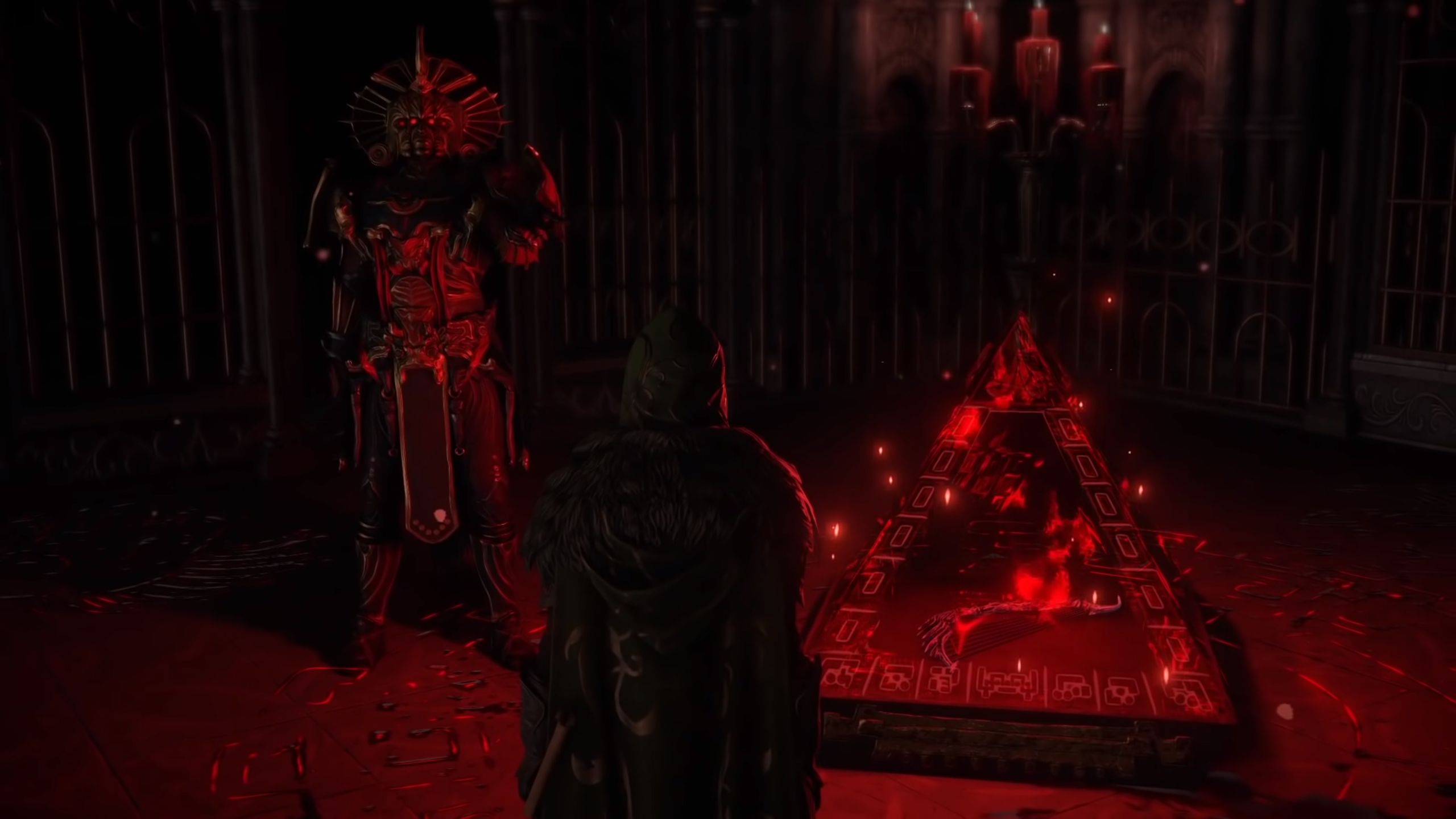 It’s been a while since I have reviewed Path of Exile in any official capacity, so allow me to give a brief run-down of where I stand with the past few patches.

And now, we find ourselves in Ultimatum. Path of Exile rarely leaves anything behind and instead just continues to bloat itself down a river of confusion and obtusion. There’s a decent amount to dissect in this league, so I’ll break it down into the league mechanic itself and the changes to the game overall.

The Ultimatum league mechanic feels, in many ways, like Ritual 2.0. Like what the Switch is to the Wii U, you could say. Like Daniel and the Cooler Daniel. But maybe Ritual was just Breach 2.0? Anyway, the point is, like a handful of previous mechanics, Ultimatum puts players in a ring with waves of monsters coming their way. Ultimatums takes place in rounds, and each round gets progressively harder, with (theoretically) better rewards being offered each time. If one fails at any point, the rewards are relinquished. One can also refuse to continue and take the rewards they’ve earned until that point.

It’s a great risk versus reward mechanic because it gives the players a lot of choice. Participants not only choose to continue to the next round or not, but they also choose which negative effects are applied to each new round. Some effects will have little impact on specific builds, while others are to be completely avoided. Given three to choose from each round, one can hopefully craft an Ultimatum that they can complete and reap the benefits of, but not always. The amount of rounds is seemingly random, though the cap increases as the game progresses.

As usual, there’s also a boss to fight: the Trialmaster himself. He is at every Ultimatum, usually ribbing everyone for tapping out or failing. If not, he’s probably getting pretty upset that you’re succeeding. Overall, his personality is one of the highlights of the league itself. I’m sure this mechanic will be yet another added to the list of core mechanics, and while I loathe the bloat, I will be happy that he will have a place in Path of Exile for the foreseeable future. 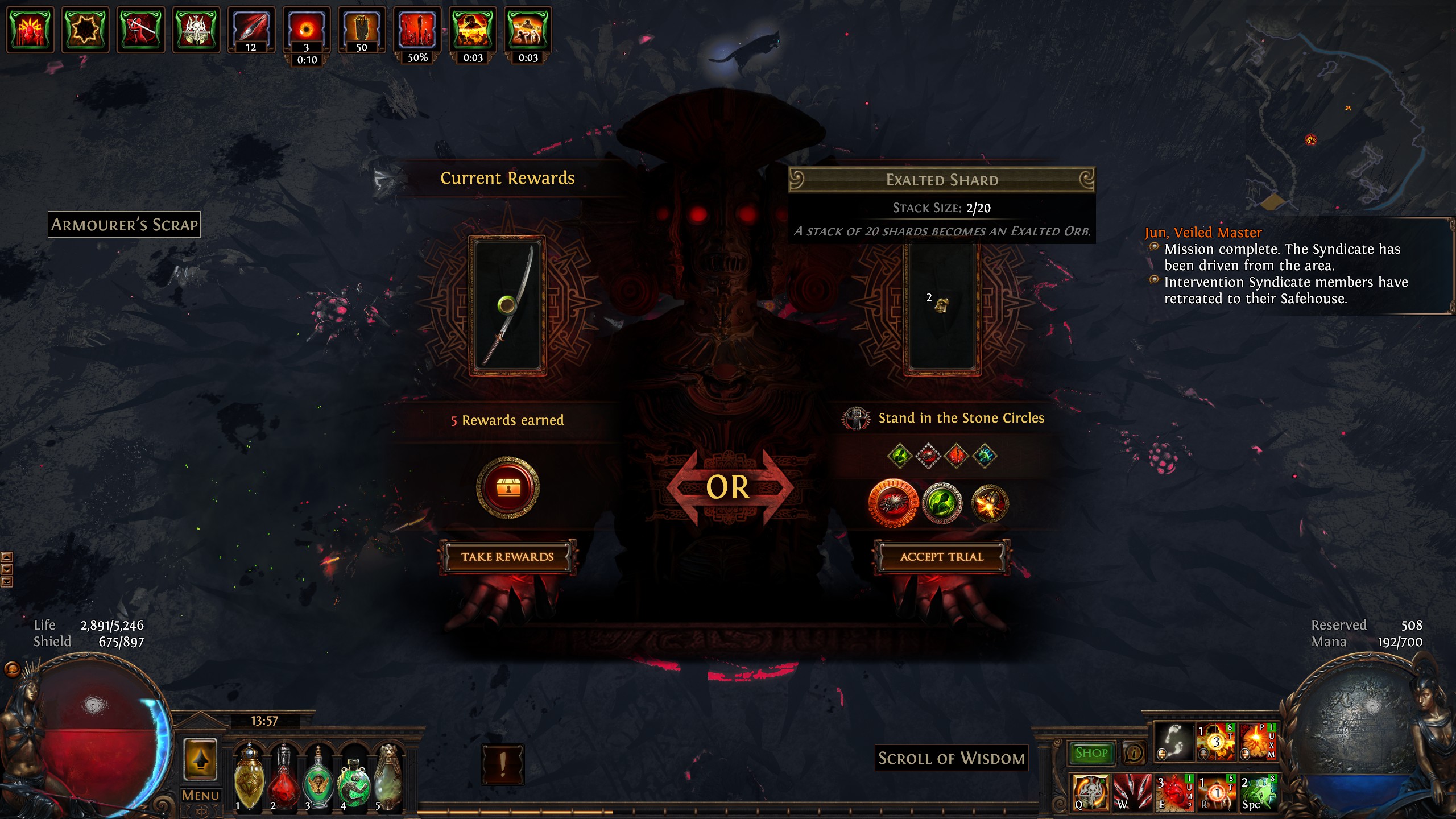 As for the boss fight itself? I can’t actually comment. He shows up randomly as the tenth round of Ultimatums, which can only happen once one gets to red maps. Typically, by this point in the league, I’m well into red maps. But mapping has been neutered to the point where the only red maps I’ve been able to do at level 90 are ones I’ve bought from Zana. I am so over-leveled for the content I’m able to do that it’s borderline boring.

Additionally, even people with hundreds of hours this league are claiming they haven’t been offered to fight the Trialmaster once, due to terrible RNG. I can’t validate those claims, but I also can’t not validate those claims. From what I’ve seen though, the boss fight is more or less standard stuff: a series of moves that will easily kill someone who didn’t Google it first, and a slew of mechanics that are completely unfair to the player and barely visible, continuing the trend of Path of Exile being the least accessible game in the modern era.

This patch also came with a lot of balance changes and a reworking to elements of previous league mechanics, mostly relating to what they drop and less so about how they work. These are all listed as “reward improvements,” though not everything is an improvement. Again though, since this game is incredibly bloated at this point, I can’t say that I have felt or even care about some of the changes. Here’s a brief rundown of a few from my point-of-view: 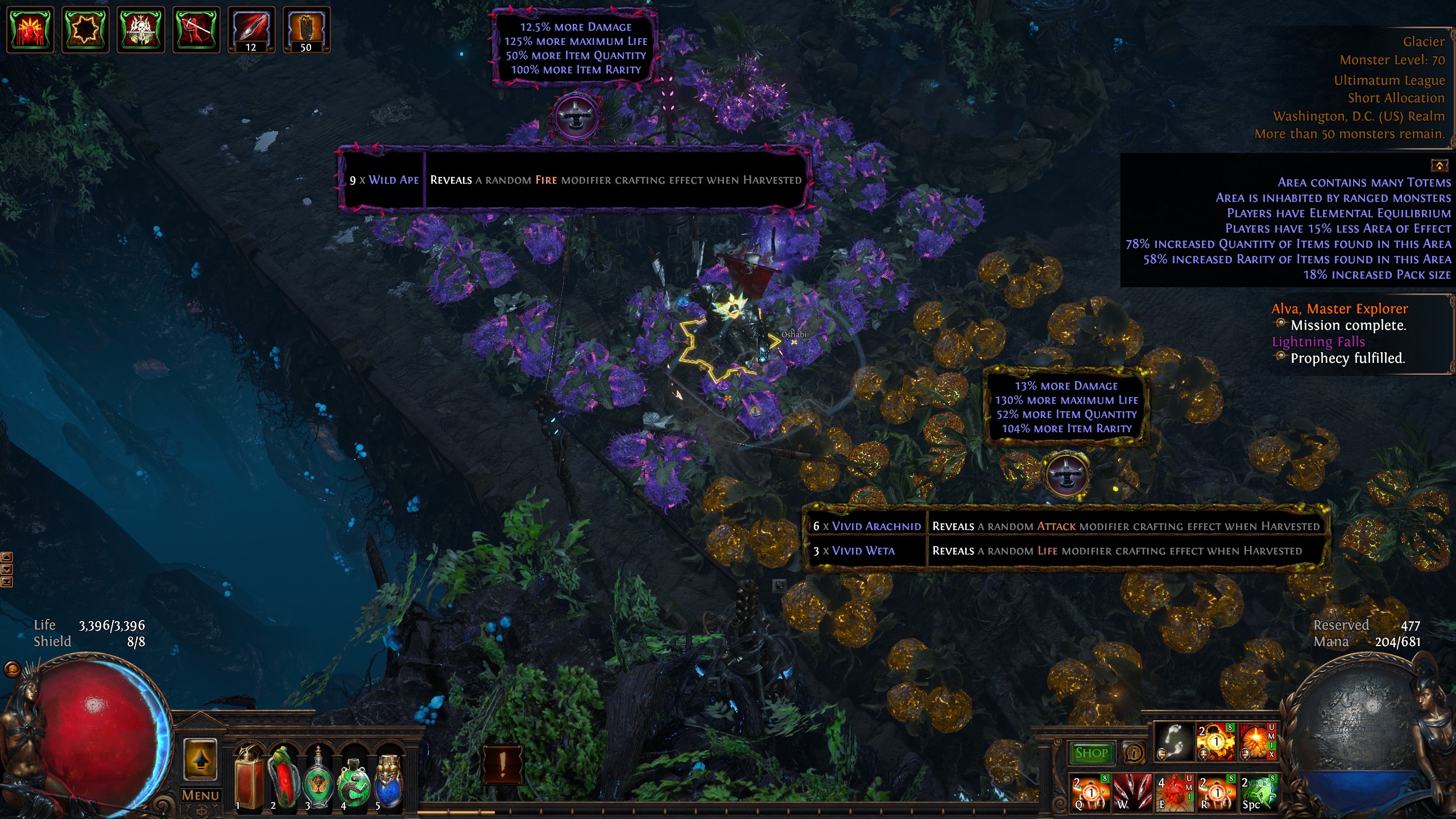 As for skills and their balance changes, they were basically all nerfs. Grinding Gear Games just doesn’t care about rarely-used skills, but instead has consistently shown that fun skill interactions are not allowed. This can even be seen mid-league, after they nerfed a very popular item a few weeks into the league and didn’t tell anyone. As someone who enjoys taking the time to make off-meta builds enjoyable, it feels like my options are becoming smaller and smaller as more and more skills become obsolete. The buffs to some Vaal skills were nice to see, and my main character this league has been using Vaal Ground Slam with great success.

The new skills in Ultimatum are really cool, at least. They’re all blood-related, like the blood-splosion Exsanguinate, or the new defensive layer of Petrified Blood. Reap simply looks badass, and being able to inflict enemies with Corrupted Blood, via the Corrupting Fever skill, feels absolutely diabolical after suffering many deaths from Corrupted Blood in the past.

The main draw of Path of Exile for me has always been to find and utilize wacky and wonky item and skill interactions, and that hasn’t changed. Be warned, the next paragraph is going to make zero sense if you don’t fully understand many mechanics in Path of Exile…

My main character this league uses Facebreakers, and as such has no weapon (unarmed). But the actually fun interactions come from the new shield introduced this league called Mahuxotl’s Machination. This adds six keystones to my character that mess with energy shield and life leech and would take multiple paragraphs to genuinely explain. The biggest factor is that half of the elemental damage I take becomes chaos damage instead. I also have a helm that makes my fire resistance 75% but lowers cold and lightning resistance by a significant amount. However, with the ridiculous Lethal Pride jewel, I get access to the Tempered by War keystone which makes 50% of my cold and lightning damage taken as fire damage, of which my resistance is 75% if you remember. So, I’m able to focus entirely on chaos resistance in my gear, and due to the Everlasting Sacrifice passive on the shield, when my energy shield, which is constantly naturally decreasing but also being leeched from hits, reaches its maximum amount, my chaos resistance increases by 5% temporarily. To achieve this on command, I use a Sorrow of the Divine flask in conjunction with a Forbidden Taste flask to instantly max out my life and energy shield at the same time.

So yeah, Path of Exile can be a bit complicated sometimes, and that’s why I love it and why I hate it. Overall, I find myself losing interest in pushing maps that are harder to sustain in a league with a cool mechanic and some questionable design changes. I am not in the complete upper echelon, but I do fancy myself much better than what is probably considered “average” in Path of Exile. I’ll continue to play and probably end up around 15 or 16 league challenges before quitting, and then maybe dump some currency into a meme-tier build. Maybe based around The Gull? I’m not sure yet.

Ultimatum is up and down with the actual changes, but the league mechanic is solid and the Trialmaster character is easily one of the best introduced since Einhar, and I sure hope he’s here to stay, even if his boss fight is frustratingly locked behind RNG.

[This review is based on approximately 85 hours played. I have a level 90 Ground Slam Champion and a level 71 Cyclone/Exsanguinate Inquisitor so far this league. You can view my characters here.]