Is that a truth or a fact?

What the heck was Killer7 even about? Japan being on the brink of war with the United States? Political parties being infiltrated by terrorists? Brutal assassinations being carried out against key political figures? It sounds like a Tom Clancy novel, and I don’t mean that as a compliment. So why is it that I now have an urge to play it again?

It certainly captured my imagination when I was younger. Cool characters, bizarre graphics, and cryptic dialogue, all presented in a heap reeking of weirdness. It was the ultimate style-over-substance game. Forget whether or not the gameplay was good, there was nothing like it at the time, and arguably, there still isn’t.

Weirdness may not get you sales, but it definitely helps you stand out if you apply it to the correct areas. Paradise Killer is coated in the salve of abnormality, but will it cure the rash of the mundane, or is it just taking care of the itch? If I’ve lost you with these analogies, trust me, it’s about to get more confusing. 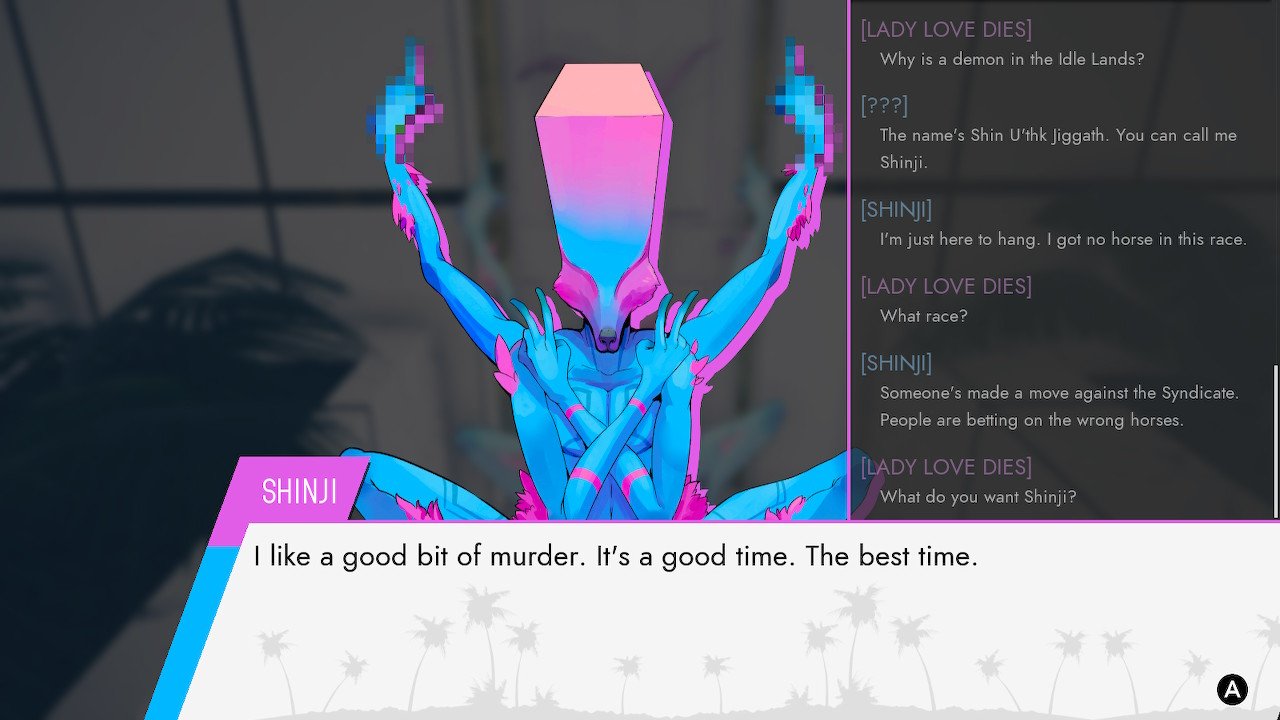 Paradise Killer is really the story of two mysteries. The first is who killed the Syndicate Council. They were protected by four holy seals that are so impossible to breach that the crime scene can’t be investigated to confirm that they’re even dead. Yet, somehow, somebody got through and ended Paradise. Everyone is pretty sure it’s the demonically possessed citizen who escaped that night, because, after all, he was found on the steps of the council building with a knife and a belly full of their blood, but that leaves a lot of unanswered questions on its own. Someone needs to get to the bottom of this.

The other mystery is just what the heck is going on in the game world. You belong to an organization that is devoted to resurrecting or summoning cosmic gods. The gods contacted humanity, pitted us against each other, and then were chased off or killed during the great betrayal. To bring them back, the Syndicate has been building islands of Paradise in pocket dimensions, then kidnapping citizens to work and worship on their island. However, each island has become corrupted by demons at some point and had to be wiped from existence, the citizens culled in a horrific ritual to harvest their psychic energy.

Weirdly enough, by the end of the game, both these mysteries made sense to me.

You play as Lady Love Dies, an investigator and part of the syndicate who was exiled after she was tricked by one of the cosmic gods, which nearly resulted in the syndicate being wiped out. She’s called back into action by Justice, an impartial judge who has tasked her with finding out who killed the council.

The council was killed on the night that the 25th cycle of Paradise was to start, named Perfect 25 because of its supposed resistance to demonic influence. As a result, Paradise 24 has already been purged of its citizens and the only people left on the island are syndicate members who were still on the island when the murders happened. There are also some ghosts. And a dog.

It’s up to you to gather clues and testimony and find out who killed the council. Was it the hunky doctor with robot arms? The goat-headed idol? The bartender who is just a red skeleton with ill-fitting pants? Was this a Murder on the Orient Express situation with all of them in on it? 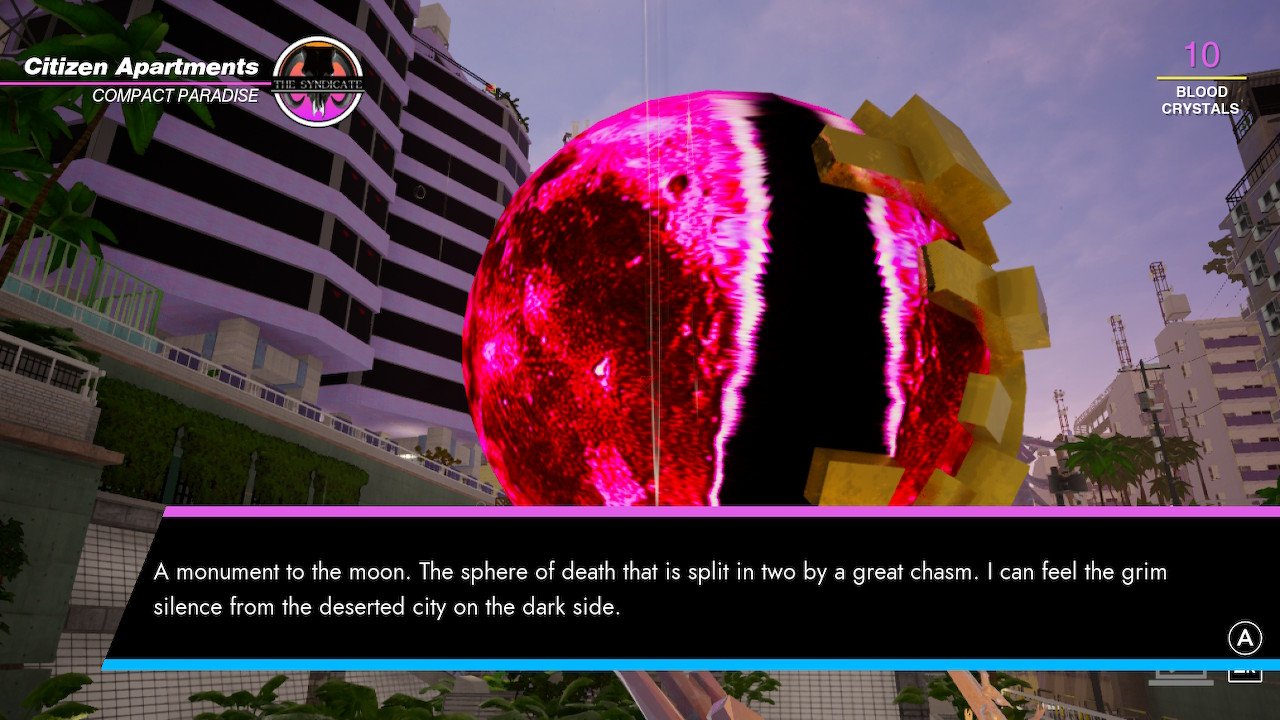 It’s entirely up to you how you conduct your investigation. At any time, you can bring the cast to trial and present your evidence. However, if you go in unprepared, you’re not going to get your conviction. Therefore, your efforts are best spent scouring the island for clues and interrogating suspects to find holes in their stories.

This actually brings me to the one blight I found on the surface of Paradise; holy crap, the world is really boring. And it is packed with things to collect. From the game’s currency, blood crystals, that you pick up one at a time, to relics that reveal backstory but otherwise have no defined value, to the ever-important clues that will help your case, collectible items are scattered everywhere like a blimp full of confetti exploded above the city.

Everything in Paradise Killer oozes style, just not the game world. Aside from the creepy statues of cosmic gods that cover the island, everything is really sterile. In no place is this more apparent than the residential districts, filled with Japanese inspired apartment buildings and houses. Stairs; lots of stairs. And they took the time to make sure there was a collectible in every nook and cranny: on decks, on rooftops, in backyards. It’s questionable as to whether you need all these collectibles or not, as you might be better off just focusing on finding major evidence. But, if you’re like me, you’re easily tempted by shiny things. 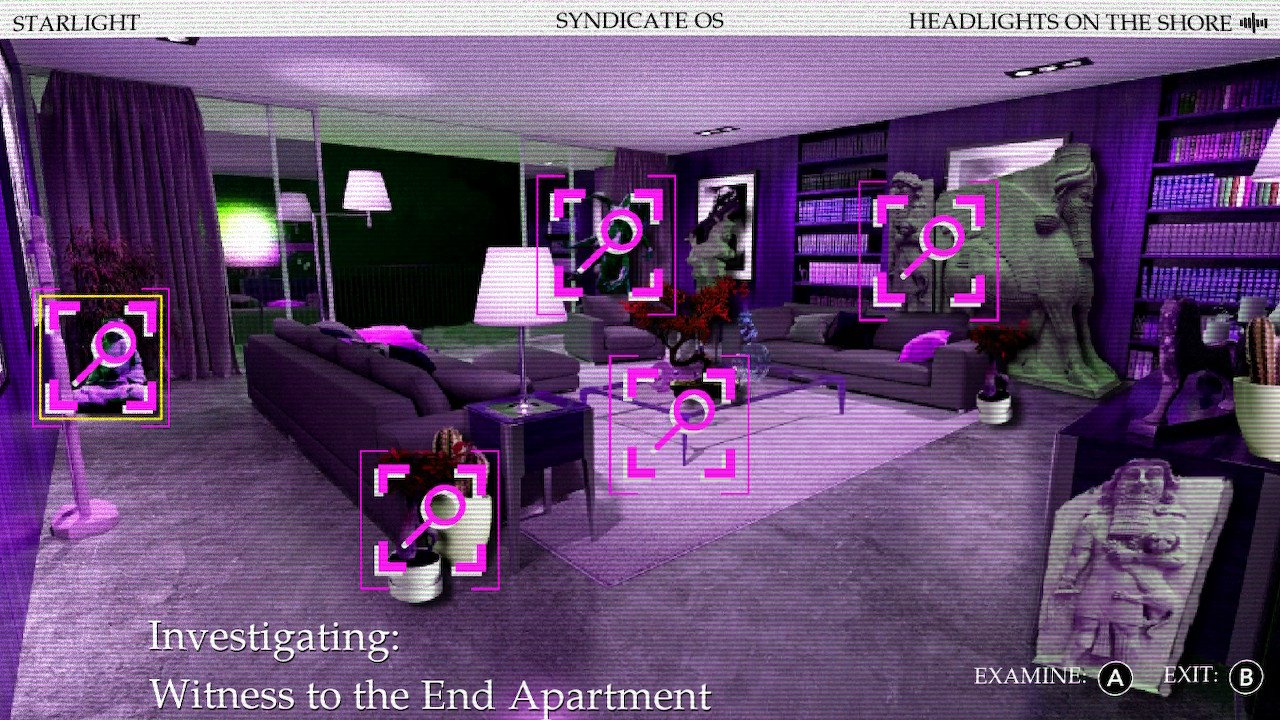 Really, though, that’s my major complaint: the exploration kind of sucks because the world is so mundane at its core. The island isn’t huge, but it’s big enough that you may want to invest in unlocking all the fast travel points.

Otherwise, everything is brilliant. The writing is stellar, turgid with stylish weirdness, but not so abstract that it doesn’t start making sense once you learn the difference between your Silent Goat and your Eyes Kiwami. It offers multiple unique perspectives on this bizarre dimension you’re dropped in. Is the syndicate even worth saving, or has it become too corrupted to continue its existence? Wasn’t its goal a little twisted in the first place?

Every character has their own motives, alibis, and opinions. Each one is just as distinct as they look, all of them are hiding something, but does that mean they killed the council? Even characters who are never on screen get time to shine, with plenty of mentions of the cosmic gods and Syndicate members who have moved on or died. There’s a lot of depth to the world beneath all its absurdities, and it’s almost shocking how neat and tidy everything fits into place. 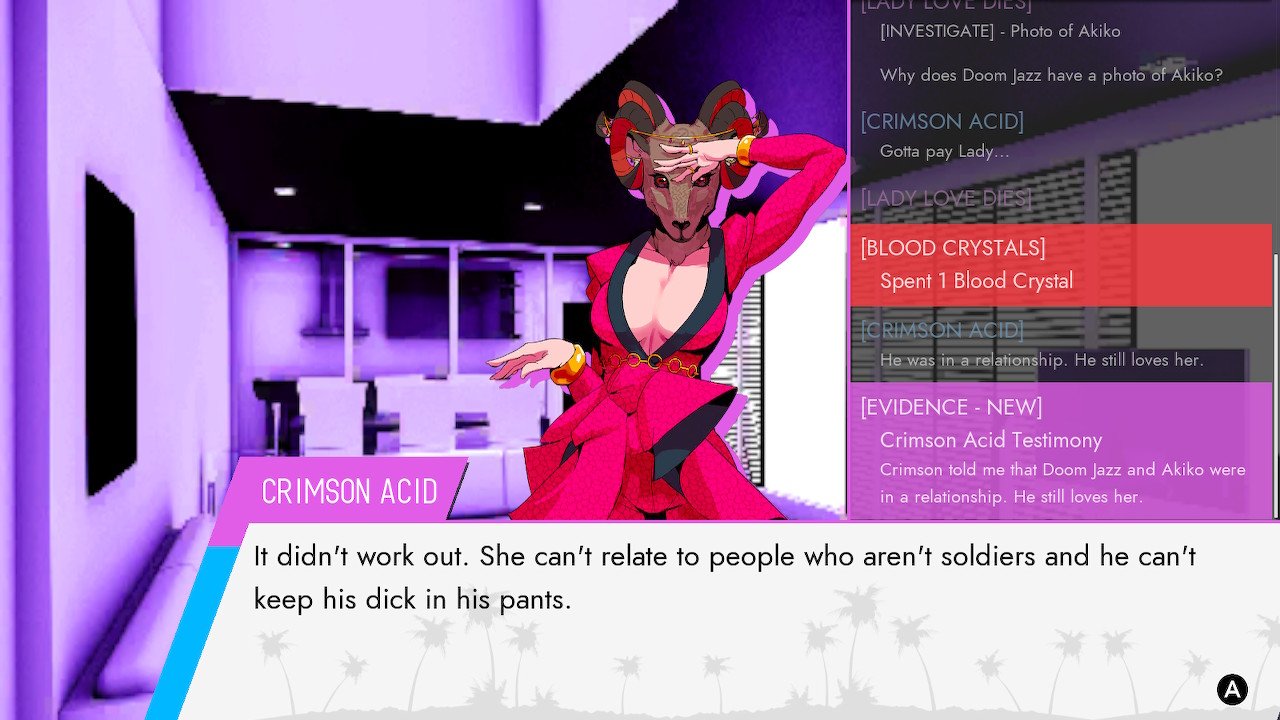 After the island was scoured, every character had exhausted their dialogue, and all the facts were in my hands, I was able to take my case to trial and paint a portrait of the truth. The whos, the whats, the whys, the hows, and the whens all locked tightly together in a vivid tapestry. The game never told me I was right, but I was confident in the truth I had put together.

Paradise Killer is a strange experience. Even having completed it, I have difficulty putting into words what it was like to play it. It’s sometimes boring, often intriguing, frequently funny, and startlingly deep. I didn’t go into this expecting such an amazing detective experience, but that’s exactly what I got. It’s rare to see a game so adeptly balance style and substance, and even though it’s not a flawless experience, it has it where it counts. We may have just fallen short of Paradise this time around, but the next cycle could be perfect.