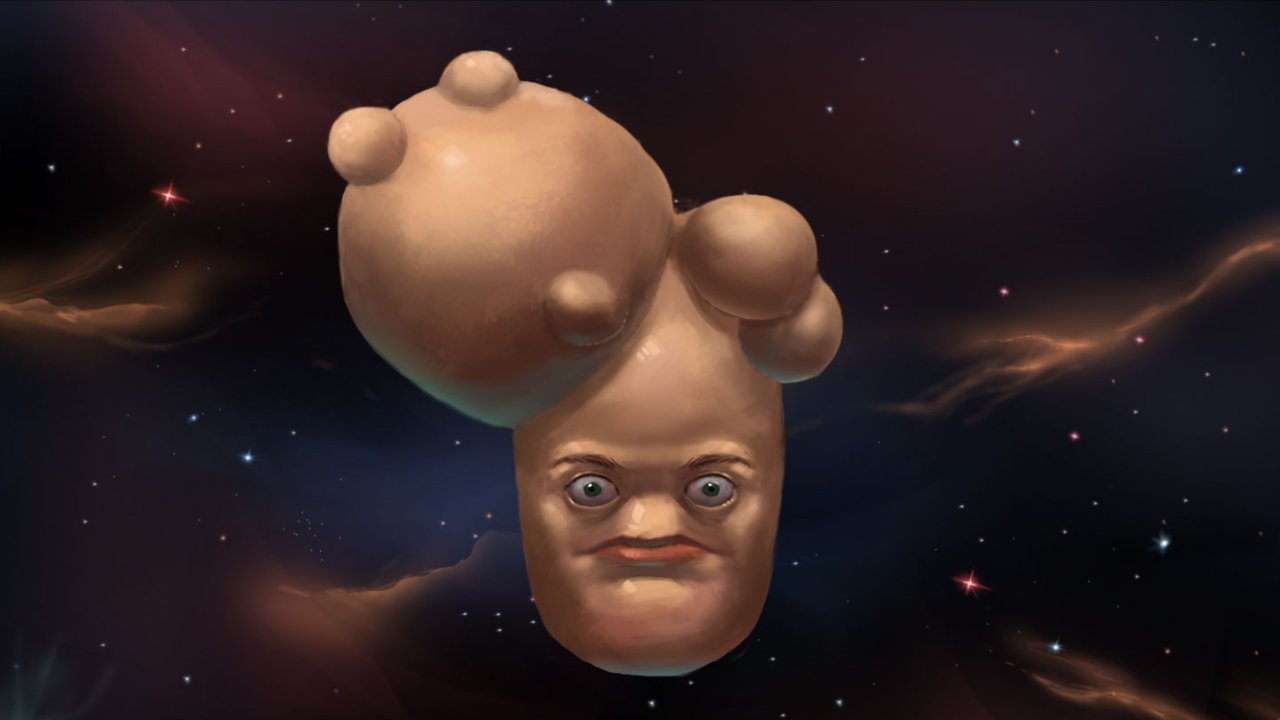 Paradigm is a game that asks the player to contemplate some tough philosophical quandaries. Its story, which revolves around the concept of genetically engineering perfect prodigal children for the wealthy ruling class, forces the player to think about the idea of the rich furthering their dynastic reign over the poor through absolute and unnatural biological superiority.

Likewise, we’re left asking the question of whether a child that was constructed virtually with every aspect of them predetermined by their benefactors could ever be a unique individual that is capable of true, independent thought. Do these children, which were not constructed by natural means, have souls? Could they even be regarded as truly human?

Instead of providing us with an answer to these all-important questions, Paradigm would much rather that we forget about them and engage in turn-based combat with a pug who just happens to be the figurehead for a cult that’s dedicated to Glam Metal instead.

You know what? I’m okay with this. 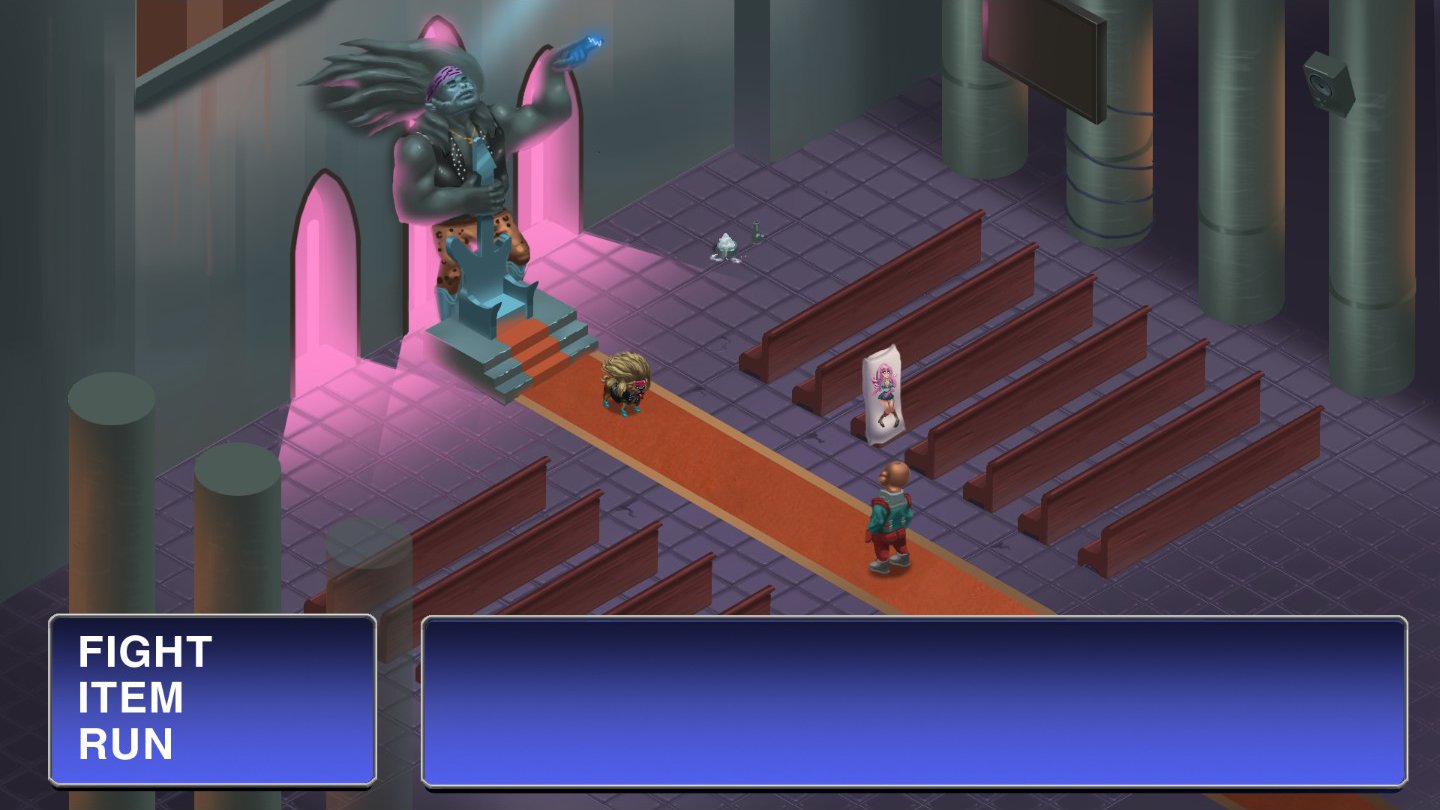 Set in the fictionalised post-apocalyptic Eastern European country of Krusz, Paradigm sets you in the role of the game’s titular protagonist; a mutant who was created as a result of the failure of DUPA Genetics’ — a company that produces prodigious children for their wealthy benefactors — biological engineering process. Paradigm is an electronic music artist — one who aspires to become the greatest that the world has ever seen, and throughout the game, his primary motive is just to complete his latest EP.

Unfortunately, various circumstances, as well as the tyrannical, yet insecure, candy-vomiting sloth who is currently in control of DUPA Generics, all seem to conspire against Paradigm, and he’s forced to rise up to become the world’s unlikely saviour.

While Paradigm‘s story does contain a few interesting revelations pertaining to both the titular protagonist and the antagonistic sloth, Olof, it never strays too far from this primary setup. Instead, the game merely provides clarifications as to why Olof is actively antagonistic to the protagonist, as well as offering several obstacles for Paradigm to overcome so that he can defeat his nemesis and finally finish work on his EP. In this sense, the story isn’t at all complicated, although it does manage to be consistently engaging due to how well Paradigm handles its cast of characters. 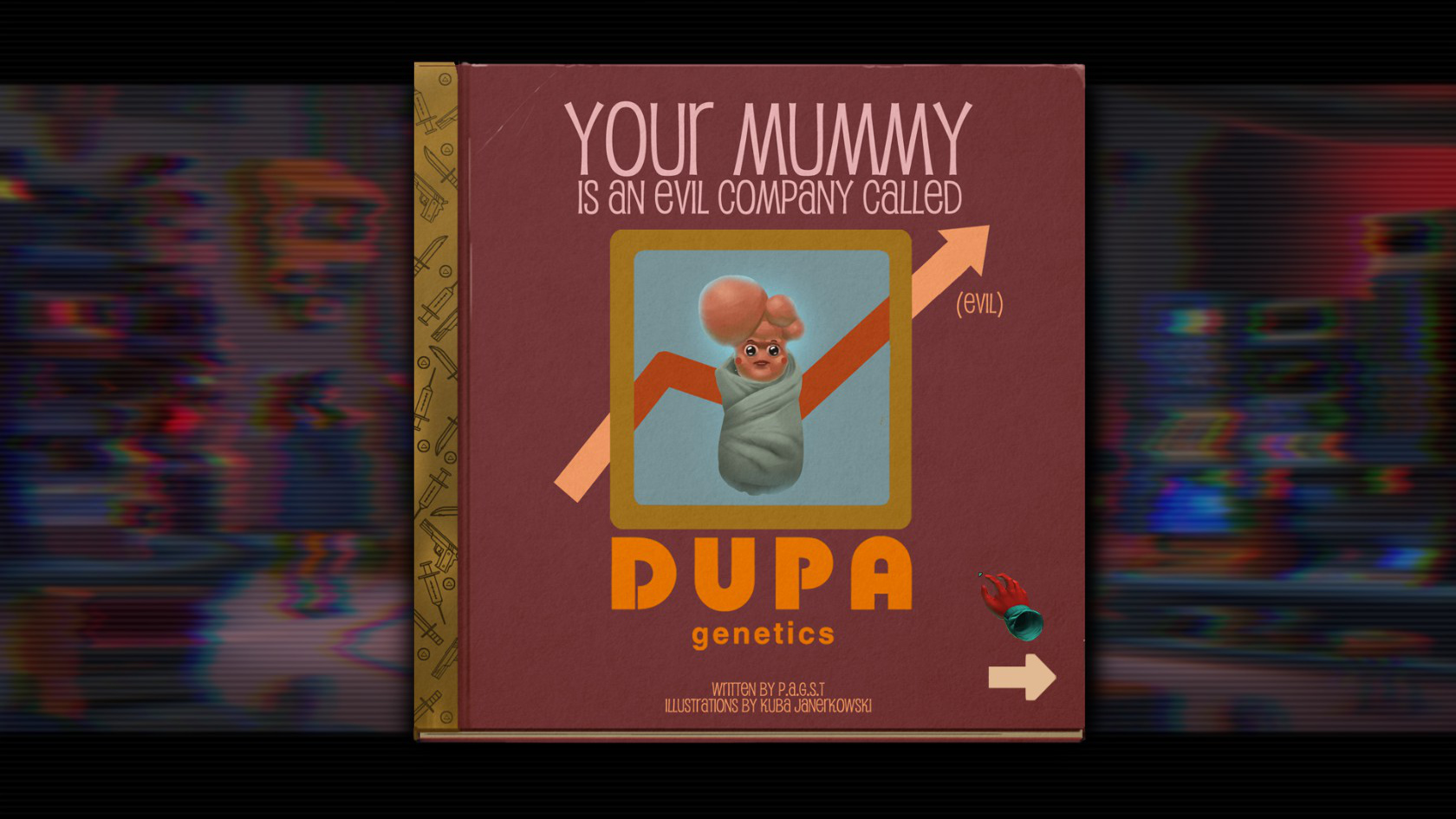 It’s these individuals that makes exploring Krusz so entertaining. Throughout his journey, Paradigm interacts with an incredibly diverse and memorable cast of characters, such as a beatboxing eggplant, a knight who gave up on heroism in order to pursue a career as a secretary after realising that the pay is significantly better, or a traffic-cone-based superhero.

Even if a character is only on-screen for a few minutes, such as the Glam Metal pug that I mentioned earlier, the game still manages to give them some sort of a personality or unique traits. Many of these characters even have their own (utterly bizarre) backstories, which may either be told to Paradigm through the game’s dialogue system, or by interacting with the world around you.

For as utterly weird as Krusz is, it does a convincing job of conveying to the player that it’s a place that’s actually inhabited, even if its society is somewhat warped and twisted.

If it isn’t already apparent, one of Paradigm‘s biggest selling points is its offbeat sense of humour. Paradigm comes across as if it takes inspiration from the more surrealistic traits of The Mighty Boosh, before adding in some of the darker and more cynical aspects of Bojack Horseman, even if it’s not quite as introspective as the latter of these two shows. To add to this, the game relies quite heavily on meta-humour and fourth-wall breaks, jabs at current gaming industry trends and online culture, referential gags, as well as the playful mockery of various Heavy Metal subgenres.

Considering that these things all appeal to my own sense of humour, I found that many of the jokes, or the strange and absurd situations that Paradigm is placed in, could make me laugh at least a little. However, due to the highly subjective nature of comedy, this sort of humour may not be to everyone’s tastes. 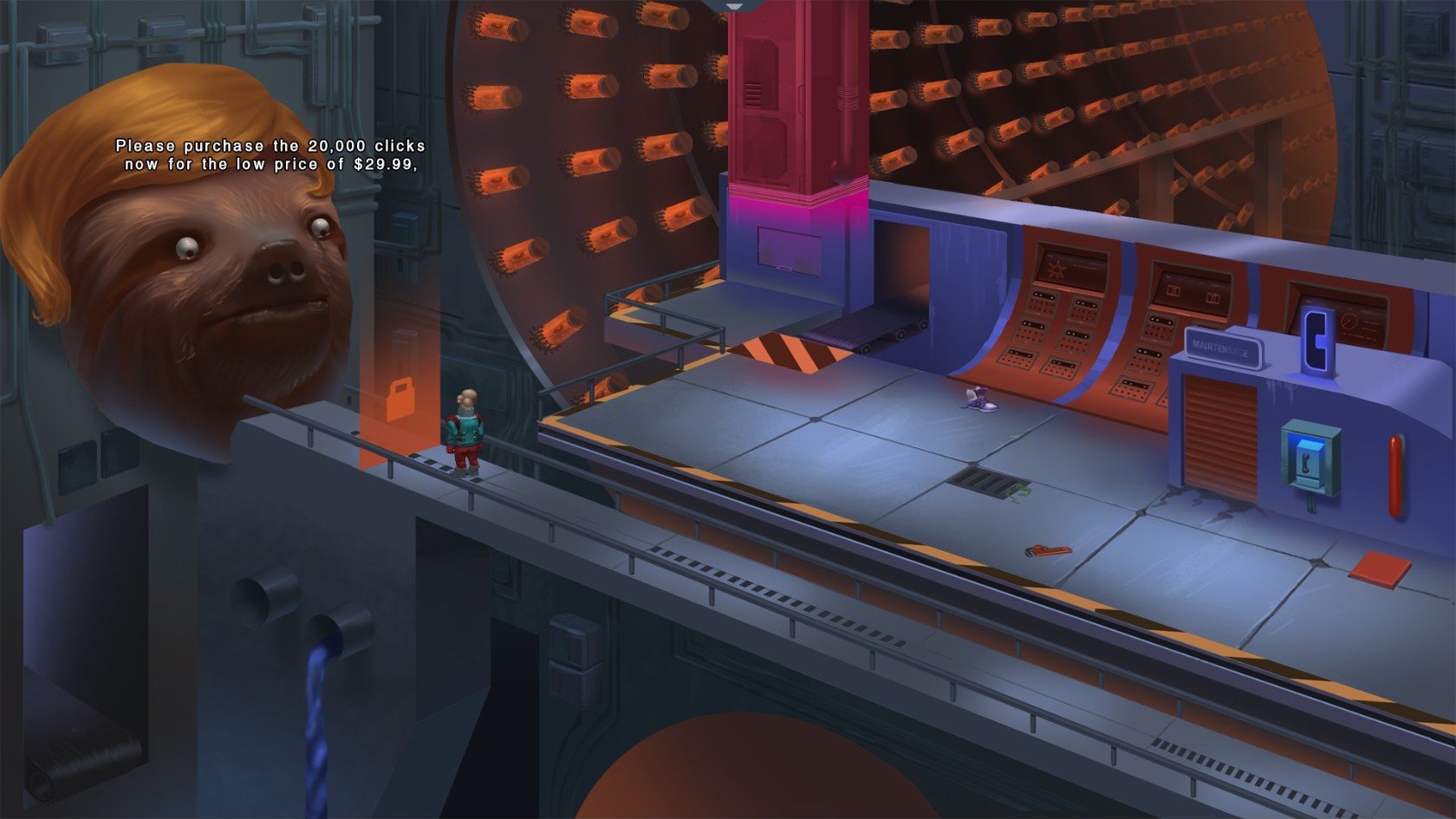 Paradigm‘s visual aesthetic is somewhat reminiscent of what a post-apocalyptic future would look like if it was interpreted by someone from the 1970’s or 1980’s. From its static and scan line-laden intro video and menus to the technology that scatters the environment, such as the boxy CRT monitors attached to almost every in-game PC and its use of collectable cassettes, Paradigm does an effective job at sticking to this design scheme. There are some exceptions, mind you, such as the use of flat-screen LCD panels in the Church of Latter-Day Glam, but these are usually added as a means for Paradigm to make a quip at their expense.

It goes without saying that such a level of consistency helps when trying to lend a level of believability to Krusz.

The environments, themselves, are also impressively detailed, if a little comical. Each locale that Paradigm visits is absolutely littered with objects that are all, in one way or another, intractable. Even if an object had no real in-game use, I still found myself wanting to inspect it or even speak to it, as I’d more-often-than-not be treated to some amusing line of dialogue, or an interesting bit of backstory about the world and its characters. Hell, there’s even an explanation as to why the local observatory is shaped like a butt that makes perfect sense within the context of the game’s universe.

The soundtrack, too, is worthy of note. While the music in Paradigm is often used to provide a level of ambiance to the environments, or to set the mood, there are a few circumstances where it manages to take the spotlight. During many of the cutscenes, including one involving flying traffic cones, as well as the introduction of a certain pug, the game will use its soundtrack to make a moment feel far more epic than it otherwise could have been. To this end, I’d say that the game does an effective job at utilising its music to its fullest. 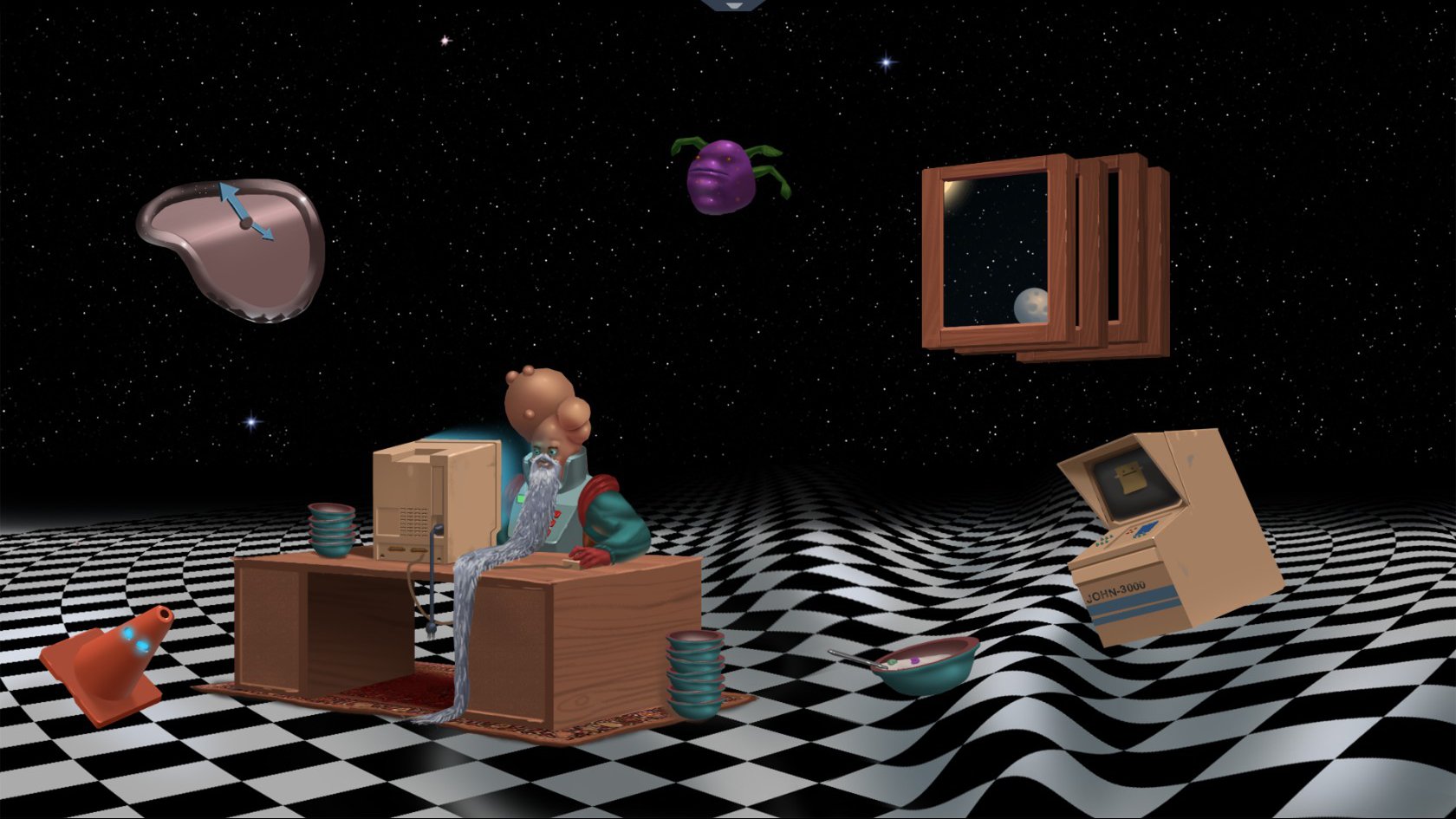 Much like the recently-released Thimbleweed Park, Paradigm‘s core gameplay is heavily inspired by the old-school point-and-click adventure games from the early 1990s. This fact isn’t something that Paradigm is shy about, either, as you can often find references to titles such as Day of the Tentacle, Sam & Max, and Grim Fandango littered throughout the game’s world, or even tattooed upon some of its characters.

This means that much of your time will be spent completing various puzzles or challenges which, for the most part, are relatively well-designed. Many of these puzzles consist of either self-contained challenge rooms, where everything required to complete them is laid out before you, or they provide you with enough hints to allow you to come up with a logical conclusion to them using the various objects scattered throughout the world.

Some of the more memorable puzzles also play around with game mechanics that are unique to these individual challenges. As an example, one of the better challenge rooms in the game had both the player, as well as Paradigm, interacting with various objects that you’d find on a traditional PC desktop. Paradigm, himself, would be able interact with the icons on the desktop, with the player being in control of a menu that could be used to spawn these objects in and out of existence. Due to the glitchiness of this PC operating system, Paradigm would also change in size depending on where he stood, with the player being able to utilise the aforementioned menu in order to lock him at one of these variances in height. 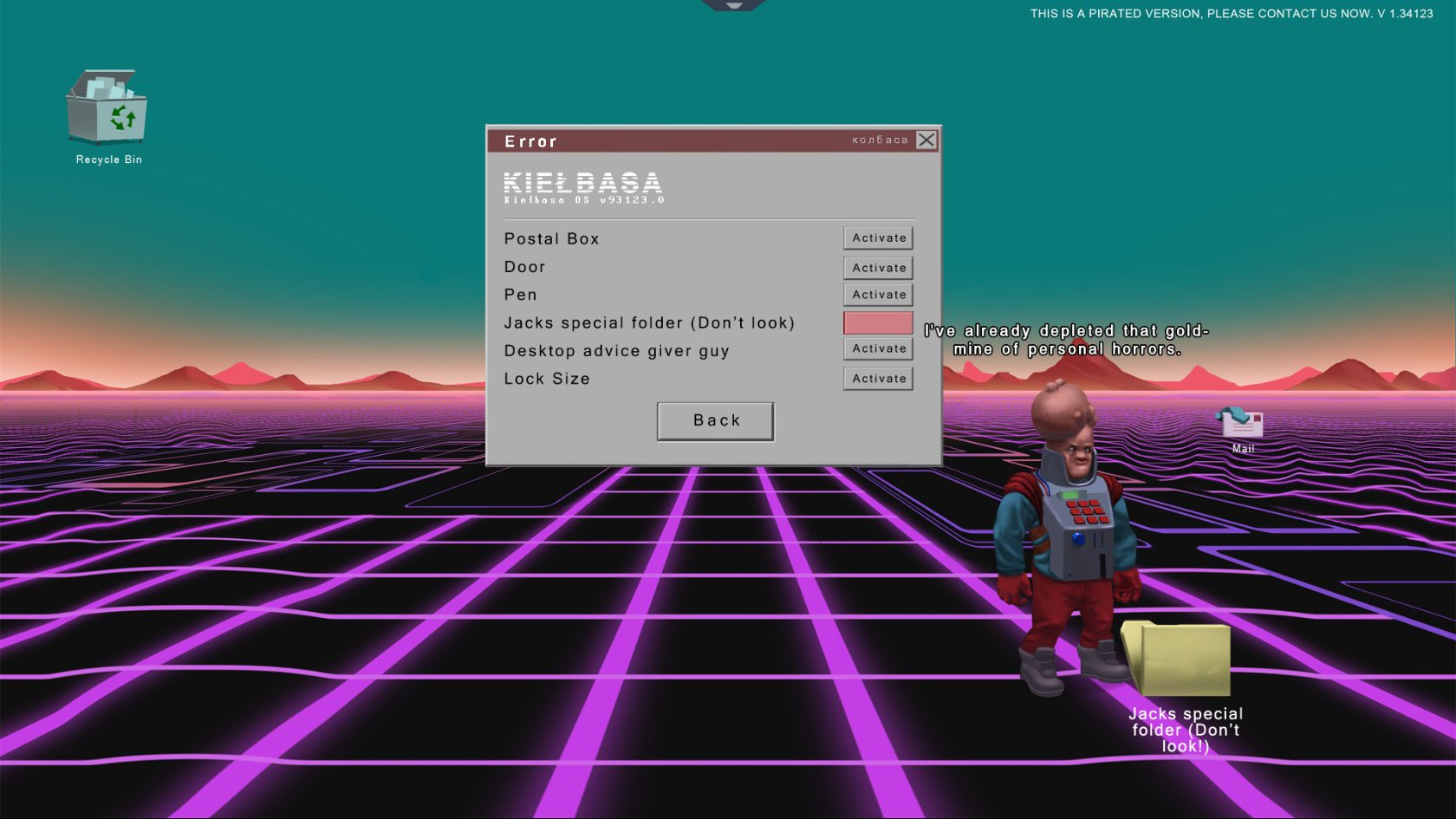 Only rarely did I feel as if a puzzle was far vaguer than it otherwise could have been. For instance, the screwdriver that was required to complete one challenge was hidden within a cupcake that’s given to you in a hallway on the other side of the building. While the game does hint that you probably should go visit the cupcake vendor just a few minutes before you encounter this puzzle, the challenge in question occurs at a point where the game gives you multiple objectives (complete with their own sets of unique tasks), with the room it’s located in being far closer to your starting location. It’s only natural that it’s one of the locations that you’d want to visit first.

The result was that, instead of feeling as if I’d overcome a fair logical challenge, I was left with the impression that I’d simply overcome the obstacle through sheer trial-and-error, as I’d only stumbled upon the solution to it after getting sidetracked when chasing down another one of the objectives. Thankfully, this is just about as as vague as the game gets, with the bulk of its tasks coming across as far more fair and reasonable.

Quite thankfully, even if you do get stuck, you can speak to Paradigm’s tumour (no, really) in order to receive a hint that, while still somewhat vague, can often guide you in the right direction. As such, I almost never felt as if I was just clicking on random objects, desperately hoping that I’d stumble across the solution to whatever obstacles the game threw at me. 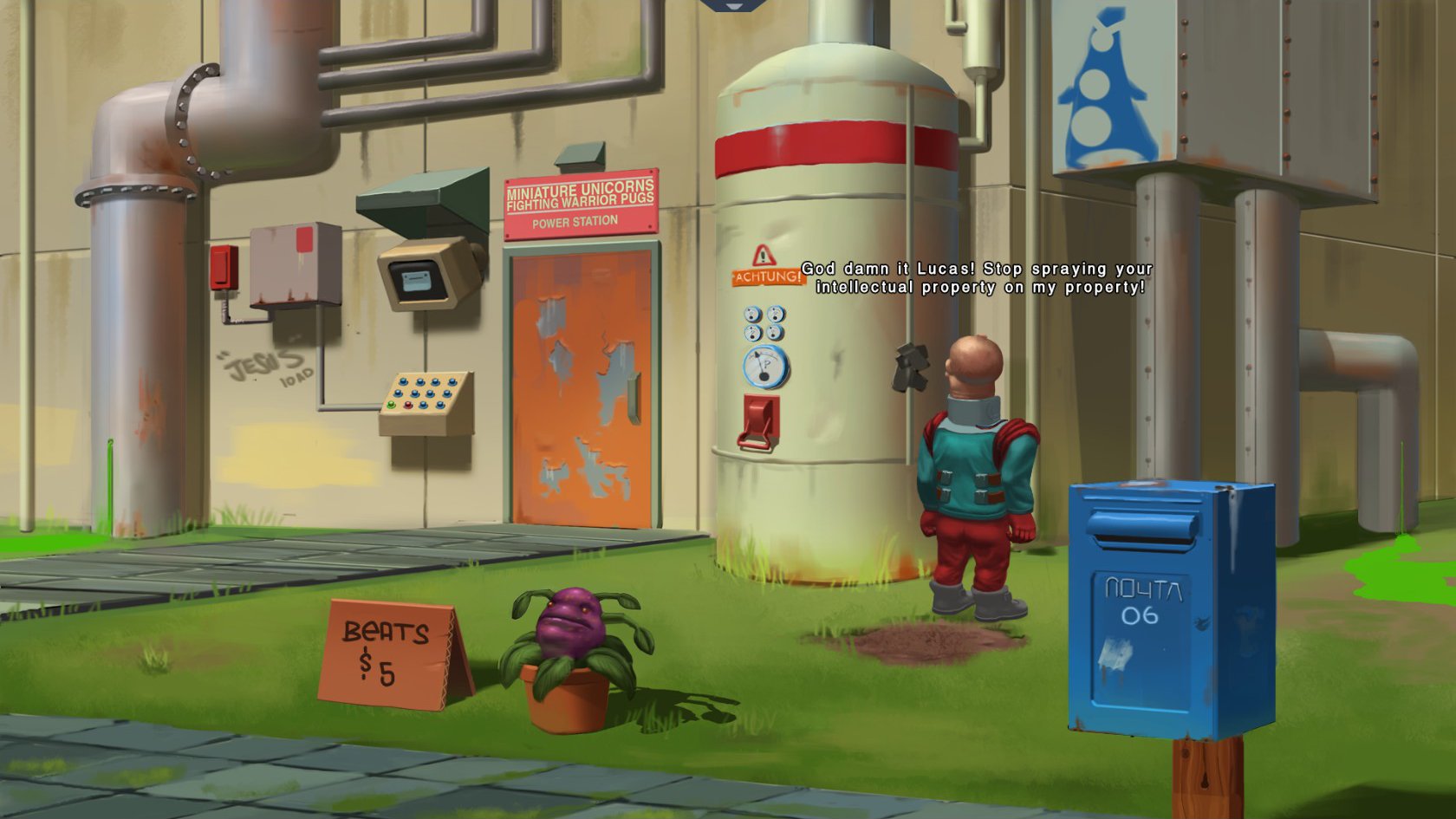 Clocking in at around seven hours, Paradigm isn’t a particularly long game, which is something that works out in its favour. Part of Paradigm‘s appeal is its ability to constantly throw the player off-guard, by introducing characters, locales and even lines of dialogue that are somewhat unexpected. If the game went on for too much longer, it might be easier to pick up on the developer’s sense of humour or eccentricities, which in turn may make some of the gags far more predictable and less effective.

As it stands, Paradigm does a good job of avoiding this problem. Even when you do notice a few recurring trends as far as jokes go — such as the plethora of witticisms or references that are at the expense of Black Metal imagery — there’s usually enough of a variation on them that they don’t feel as stale or repetitious as they otherwise could have been. Besides, anyone who has seen either an Immortal or Dimmu Borgir music video could attest to the fact that Black Metal is inherently silly, ridiculous, and easily-mockable.

Suffice it to say, I never found myself feeling as if Paradigm had outworn its welcome. By the time the credits rolled, I was left wanting to experience more of the game, rather than less. 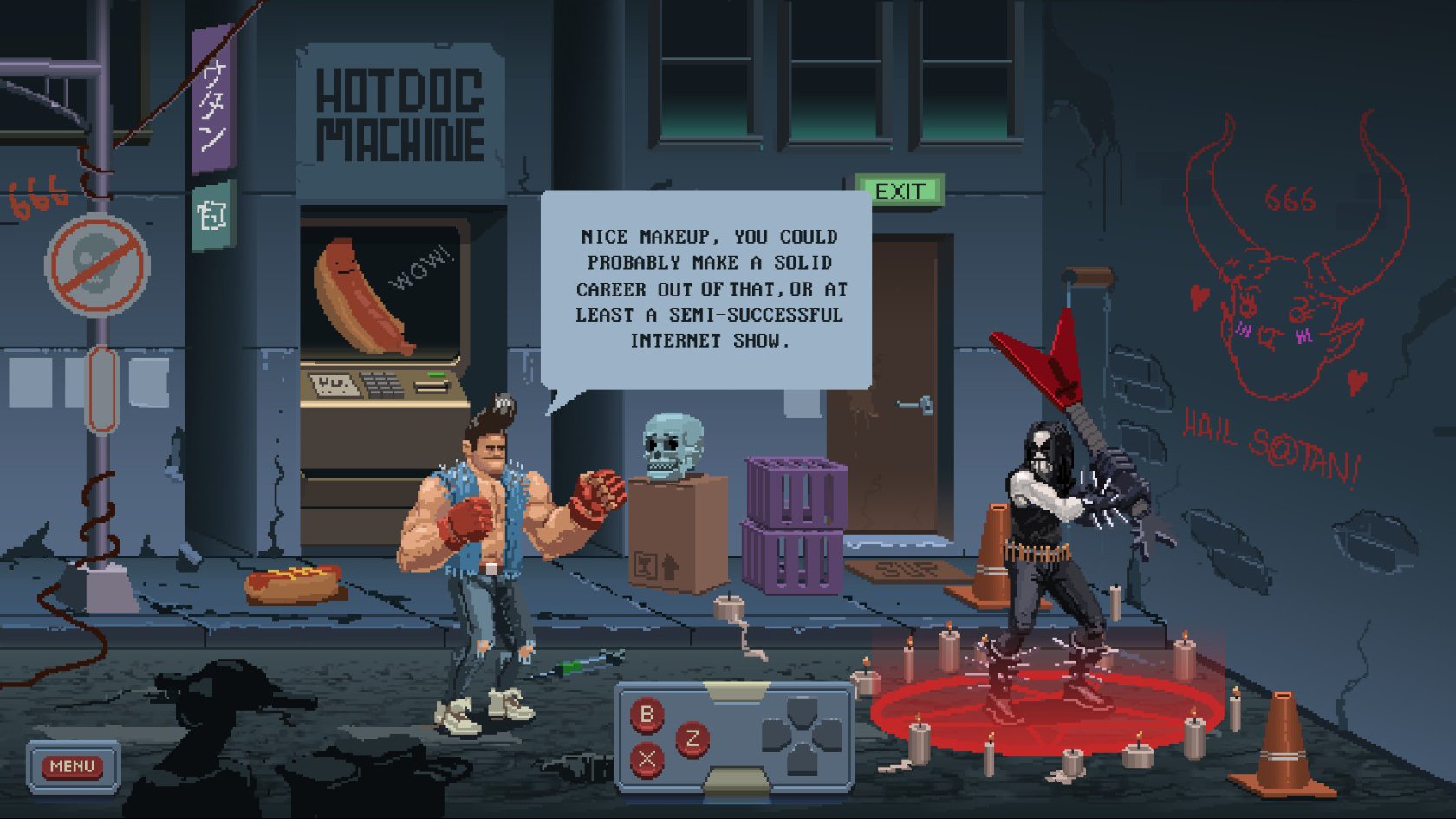 Speaking from a mechanical standpoint, Paradigm doesn’t do much to break the mould, or to expand upon the formula that was laid out by its predecessors. However, it’s clear that doing so was never the game’s intention. What Paradigm does provide is an excellent rendition of a style of gameplay that the developer has a clear level of fondness for.

To this end, Paradigm succeeds in being a genuinely funny and entertaining point-and-click adventure game. What it may lack in innovation, it more than makes up for with its consistently engaging story, its distinctive and unique world, and its diverse and eclectic cast of characters. Admittedly, its offbeat sense of humour may not be up to everyone’s standards, but if you’re the type of person who enjoys cynical and referential gags, as well as a heavy dose of Mighty Boosh-esque surrealism, Paradigm is well worth the price of admission.