Imagination is a remarkable thing, especially when wielded by a child. It can make a house sprout wings, bring a toy to life, and turn mundane objects into mystical things. As children, our imagination is where we went to feel empowered; any child can develop magical powers or become an intergalactic hero, no matter what their real life is like. Yet it’s also a place where a child can escape, or even confront things that in reality they have little control over; things like an abusive, drunk parent. A monster.

That Papo & Yo is a personal tale is obvious from the outset, starting as it does with a dedication from Vander Caballero, the game’s writer and designer. “To my mother, brothers and sister, with whom I survived the monster in my father.” It’s autobiographical, and that alone makes it something of a curiosity, but the adult nature of its subject matter also makes it stand out, especially juxtaposed as it is with the more fantastical facets. It is not without whimsy and fun, however, but that only makes the moments of loss and rage all the more gut-wrenching. 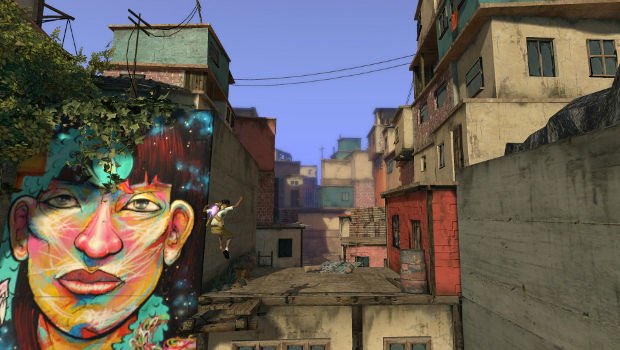 The game starts with an uncomfortable sight — a terrified child, clutching a toy robot, hiding from a monstrous silhouette. The boy, Quico, escapes from his predicament by diving into an imaginary world, yet one grounded in his life in the favela with his alcoholic father.

The dreamlike version of the favela is run-down and dilapidated, but it’s also vibrant and welcoming. The warm colors and the giant, striking street art make it easy to forget about the poverty rampant in the Brazilian slums. It is massive and sprawling, yet noticeably absent people — though filled with rusty steel drums and lonely footballs. There is one other person inhabiting the endless landscape of multicolored houses, a young painted girl who acts as Quico’s guide, and sometimes a playmate. She urges him on in his travels, but sometimes throws the occasional spanner in the works too. 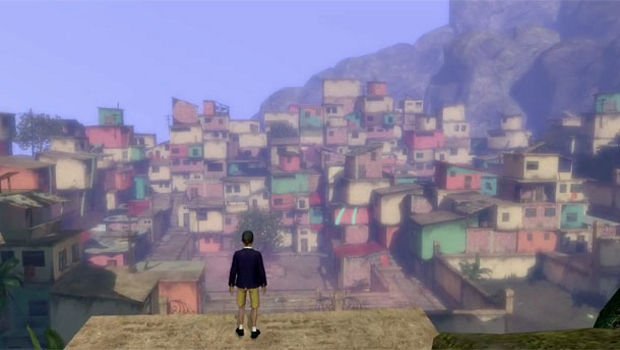 Early on, Quico’s “friend,” Monster, is only hinted at ominously through shadows and the shaking of the ground as he stomps around. Lula, the toy robot now brought to life, tells Quico that they have to find their friend, and they go searching for their giant companion through the empty sprawl. Seeing Monster for the first time is something of a surprise. Yes, he’s big and has a vicious looking horn, but he also has a jolly belly and he’s taking a nap. He likes to sleep, and when he’s not doing that, he likes to eat. His updated appearance looks less ferocious than the rhinoceros-inspired earlier version, and the result is a comical beast rather than a terrifying one.

Both of Quico’s friends serve a mechanical purpose as well as an emotional one. Lula can be sent off to activate magical chalk glyphs out of reach, and Monster can be directed to locations with the promise of his much-loved coconuts, where his weight then opens up more areas. Most of the time, however, Quico solves puzzles by winding up keys, pulling ropes, or activating gears, all made out of chalk.

The mostly simple puzzles really shine in the way that they affect the favela. Walls can be pulled apart to create stairs, houses can be wound up with keys which causes them to fly away and stack up on top of each other, and the ground can be peeled back to reveal a bright, white chalk world underneath. Occasionally, new concepts are thrown in the mix, and the puzzles become larger and, at first, more daunting. Even the more challenging ones can be broken down into simple steps, however, and they never outstay their welcome. 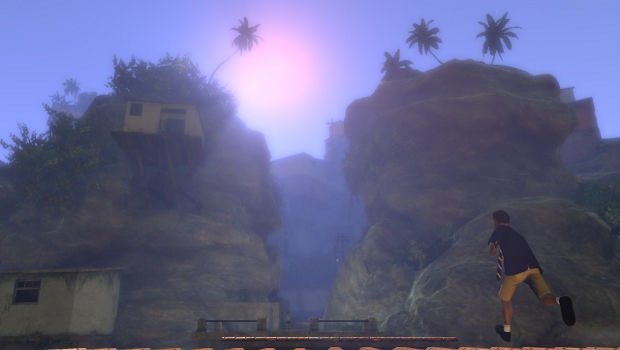 The puzzle that has stuck with me the most occurred quite early on. I faced a large chasm between buildings, with no way across. Next to me where three boxes, and lifting them would also lift up some of the houses across the gap. The large brick structures moved and wobbled as I carried their linked boxes to their destination; it looked like they were being carried by an invisible, immense giant. By the time I had laid them all down, I’d created a massive, floating bridge. The tips, all contained in little cardboard boxes which Quico can hide in, made the solution clear, but being able to manipulate the environment in such a fashion was immediately satisfying.

Throughout the first part of the game, the experience was charming and whimsical. It almost seemed like Quico had escaped the misery present in his home, and was now among friends. Then the frogs were introduced. Up until that point, Monster just slept and ate; he was pretty dismissive of his small friend, but not unkind. Unfortunately, Monster changes entirely when frogs are around. He’ll try to eat them instantly, and if he does then he becomes a true monster, one entirely out of control. These silly little amphibians, wee innocuous creatures, become the source of a great amount of pain.

There’s no death or combat in Papo & Yo, but that doesn’t make Monster’s shift to violence any less disconcerting. He can grab Quico, and fling him around, and all the time he’s bright red and on fire, literally burning with rage. After all the fun platforming and puzzle-solving it’s like being hit in the face with a brick. Despite only being a child, Quico follows his female guide to a promised cure for Monster’s addiction. He takes responsibility, despite being a victim, and his determination is a little bit heart-breaking. 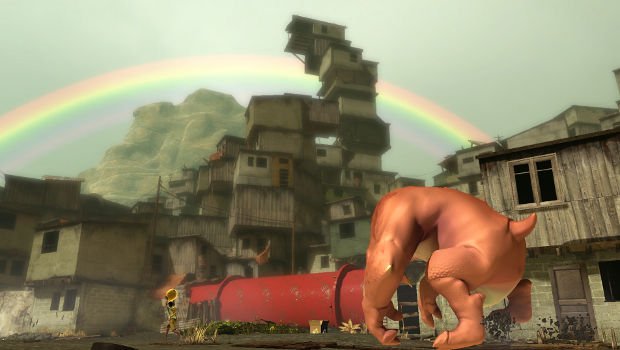 The actual gameplay feels quite disparate from the story and Quico’s journey, unfortunately. The jumping, climbing and head-scratching never seem tied to the greater challenge of dealing with the addiction of a loved one. Though they are disconnected, the actual puzzles are still inventive and add to the experience, but the platforming elements can be weak.

Jumping is imprecise at best, with Quico’s shadow only appearing at the last possible second, and I can’t count the number of times I jumped only to land on solid air and not fall, while other times it would seem like I had the perfect landing lined up, only for me to go crashing to the ground. Thankfully it’s just a matter of dusting one’s self off, and taking another crack at it. As I mentioned before, there’s no death, and little punishment.

After I put down the controller my gripes were distant memories. In the short game, Quico grows up and comes to an important realization that other people who have gone through a similar experience could, perhaps, relate to. It’s hardly a joyful one, though. For the happy ending that we so desire, we have to look past the game’s melancholy closing chapter, maybe to Caballero himself. He’s worked through the damage wrought by his abusive father and crafted a memorable, unique autobiographical work; one that’s subtle when it needs to be, and hits hard lest you forget what it’s really about. He’s managed to make something thoughtful out of something terrible, and, as weird as it is to say given the circumstances, quite fun.