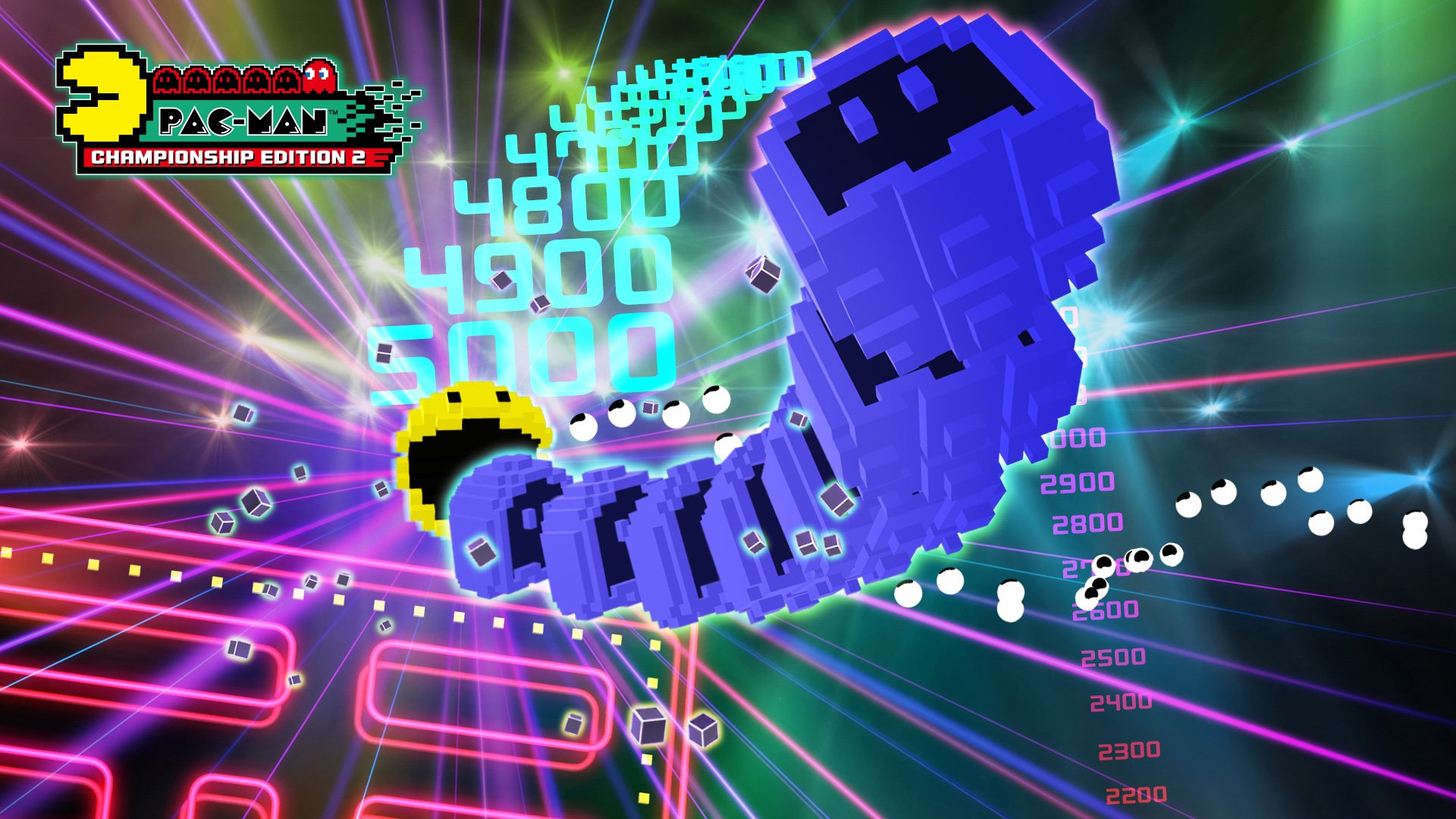 Bandai Namco has done such a wonderful job revitalizing Pac-Man. It’s gotten to the point where even if you weren’t all that into the original decades-old game, you’re still liable to succumb to Pac-Man fever. The Championship Edition series, in particular, is among the best arcade gaming around right now.

While I wish Namco would bring more of its iconic arcade properties back with a similar willingness to experiment and bend the rules, so long as the Pac-Man hits keep coming, I’ll keep playing ’em. 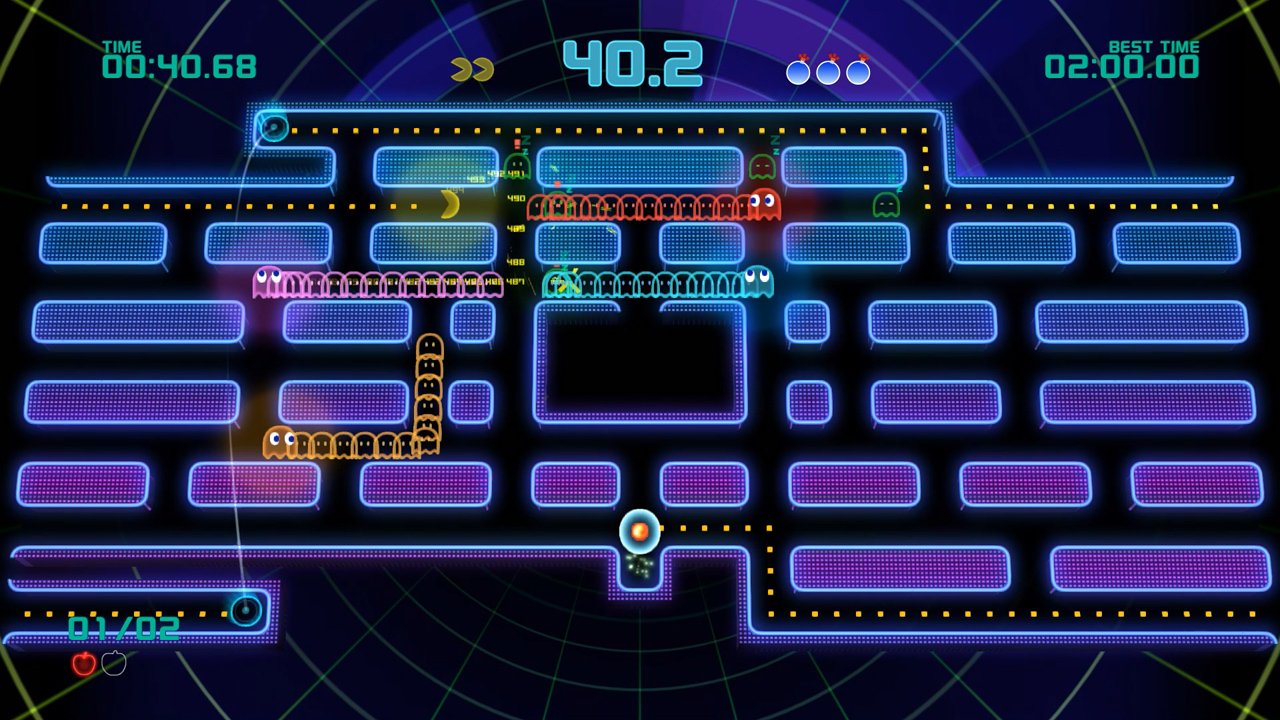 The question for Pac-Man Championship Edition 2 is “How do you build on the last game?”

Do you go bigger, better, and offer more of everything? That’s what I expected to find, but that isn’t really the direction the developers took. Instead, the game does a sort of side-step, focusing on one specific concept (creating and then destroying “ghost trains”) with a few minor rule changes here and there. That isn’t a bad thing by any means, but it definitely took some getting used to.

As before, you’ll still guide Pac-Man through levels that seamlessly change their form on the fly, and you’ll still try to eat pellets while generally avoiding ghosts. Those are constants. But now, the apparitions aren’t inherently deadly — they’ll just kill on contact if they’re in an angry state, and they’ll (usually) only become enraged if you bump into them a few times in rapid succession. This is a necessary mechanical change because Championship Edition 2 gets real chaotic real fast.

The basic goal is to eat enough pellets to fill a fruit meter, at which point one will appear in the center of the stage for you to collect. You can either mosey on over or, if you have any bombs left, jump there instantly. Once you grab the fruit, the stage will shift its form and the process begins anew, again and again, until you either clear the level by earning every fruit or you run out of time or lives.

Which brings us to ghost trains. As you’re weaving in and out of the maze, you’ll wake up little sleeping ghosts that will attach themselves to one of the roaming ghost “leaders,” creating super-long snake-like figures. The same anger rule applies to these ghost trains. You can safely bump into them a few times in a row before they get mad, and doing so causes them to go airborne for a second. But there’s a twist.

Once a Power Pellet appears and you chomp on it, the ghost trains will all go into a frenzied state, whipping around on set routes that are visually marked on the floor. The only way to stop them is to eat their leader, which means you’ll have to predict where the line of ghosts is going (or get lucky) and head it off. This is the main mechanic of Championship Edition 2, and it’s also where I’m most conflicted.

It’s satisfying as hell to eat a ghost leader and have the game flip to this crazed 3D camera view where Pac-Man gobbles down the entire line, giving you a split second of slow-mo to scan the maze and figure out where another train is traveling. But, much of the time, it also feels weirdly frustrating to pull off. It’s a bit too wild for my tastes, and as I’ve gotten better, now it’s just growing tiresome. Like I’m going through the motions. While the audio-video splendor of Championship Edition 2 is in full effect, its ridiculous animations become far less ridiculous after you’ve seen them a few hundred times. 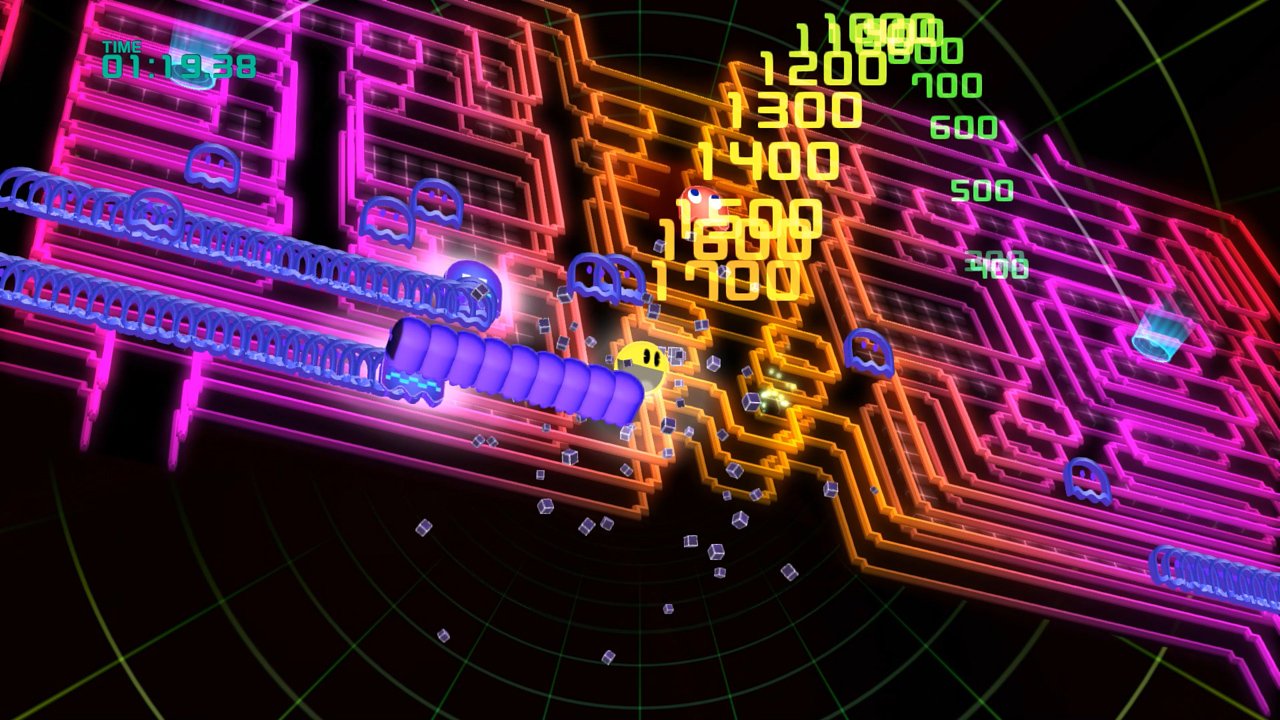 Another slight letdown is the boss battles against giant ghosts. They aren’t “battles” so much as fast-paced, multi-layer levels where you’re doing the same things as before but on a stricter time limit and with ghosts that are more frequently in a kill-on-contact state. All that said, they’re some of the most fun I’ve had with this game — an ideal mix of challenge and hectic pacing.

There’s no shortage of levels, whether you’re playing in Adventure or Score Attack, but before even reaching the end of the former mode, I was losing steam. In the moment, this game feels hypnotic, but from a longer-term perspective, I don’t think it has the variety or substance to hold my attention.

It might be a case of sky-high expectations, but this sequel doesn’t live up to its sublime predecessor Pac-Man Championship Edition DX+. Still, I’m not so sure it ever could — that game was damn near perfect, putting Bandai Namco in a tough spot when creating a follow-up. Pac-Man Championship Edition 2 is worth playing for its frenetic new style and ruleset, but it’s no replacement.