One of my favorite overlooked PlayStation 2 titles is a 2003 brawler called War of the Monsters. Inspired by B-movies of the 1950s, the game let you choose from a wide variety of Kaiju and giant robots, then battle it out in a 3D arena full of vehicles and skyscrapers to destroy while tiny humans ran for their pitiful lives. It’s still a lot of fun 15 years later, and all the more impressive when you consider how much more difficult environmental destruction was back then.

There’s no question what the biggest fighting game of the year is, but you may have missed a smaller release from a few days before Smash Bros. Ultimate came out. Override: Mech City Brawl is a party game which puts you in the pilot’s seat of a 30-story mech, then tasks you with beating the bolts off a variety of mechanical and alien enemies. I was hopeful that Override would be a spiritual successor to War of the Monsters, but how does it stand on its own? 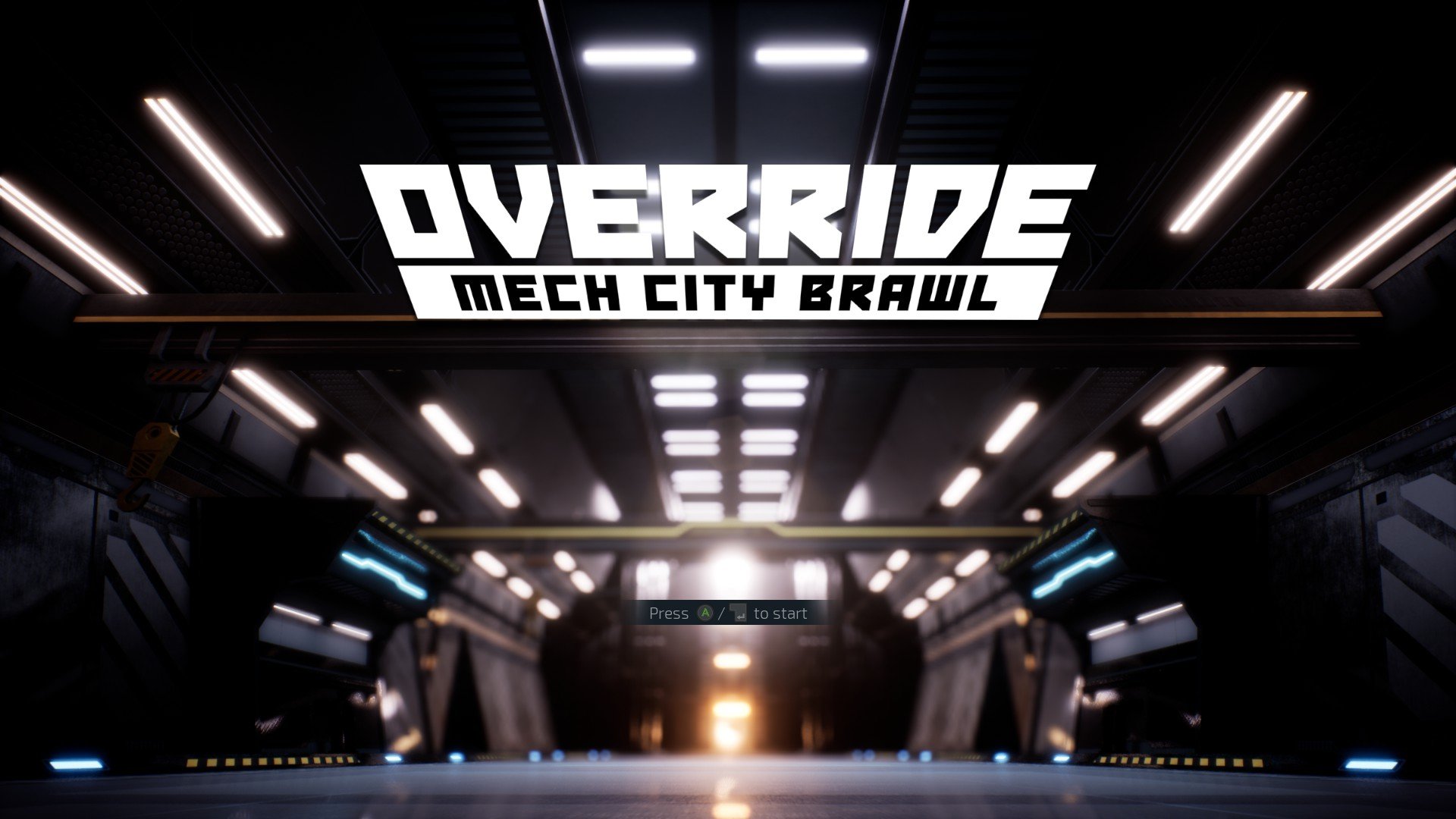 Let’s get this out of the way: Despite some early comparisons, Override: Mech City Brawl has nothing to do with War of the Monsters apart from sharing some common inspirations. It’s probably not quite the Pacific Rim game you’re hoping for either, though it does have some cool features that can let you and some friends live out your Voltron or Power Ranger fantasies.

Override has a few different modes to play, but at its core it’s a fighting game starring a variety of big stompy robots. A dozen fighters are available from the outset, and nearly the entire roster is inspired by various animals. A couple are off-brand versions of famous ‘bots like Gundam or Mechagodzilla, but most are original creations. No matter which mech you pick, they all share some common moves and it’s very easy to pick up and play. Although you can use the mouse and keyboard in the PC version, it’s pretty clear the game was designed with controllers in mind and I found it played better with a Switch Pro Controller or Xbox 360 pad.

Each of your robot’s limbs are mapped to a different button, so you can choose which arms or legs to attack with. You can soft lock-on to enemies, but you’ll lose it if they get too far away from you. Every ‘bot has a personal shield and a dash move they can use to evade attacks, and they’ll earn charge toward a super meter the longer they stay in the fight. There’s also a heat meter below each robot’s stamina bar, and attacking too aggressively will overheat your mech, leaving you vulnerable to counterattacks for a few seconds.

Oversized weapon pods rain down on the battlefield from time to time, and you can pick these up to augment your already impressive combat abilities. These can be anything from ballistic shields to railguns and grenade launchers, and there are lots of melee weapons including energy blades, a massive hammer, and a 100-foot-wide frying pan. You can even equip a sword or gun in one hand and a shield in the other if they’re size appropriate, or toss mega-sized grenades at your opponents. 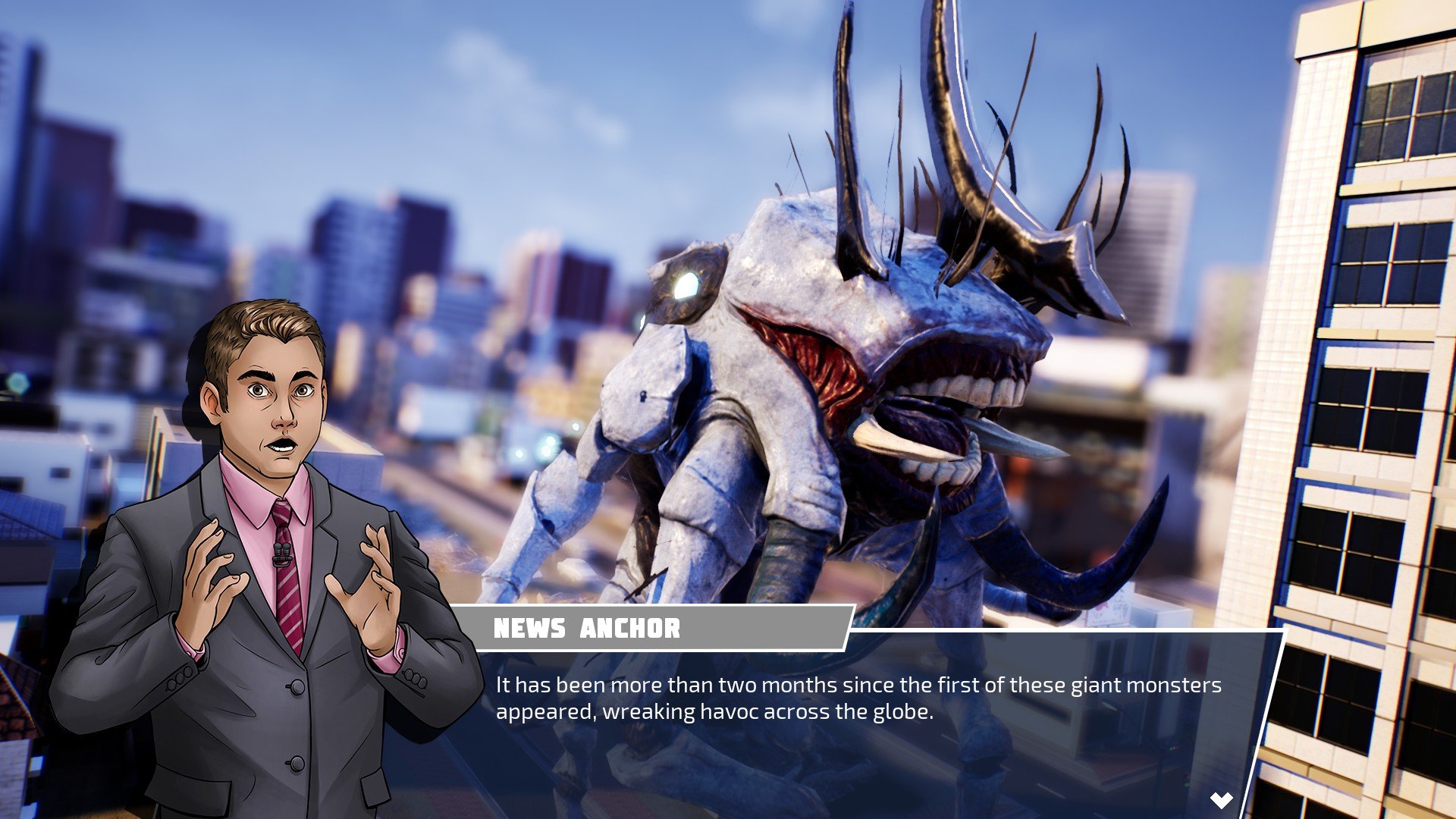 There’s a single-player campaign mode that borrows a few elements from XCOM as you and your mech join the fight against a new alien threat called the Xenotype. There are several different types of these aliens, and some of the bosses require different strategies than the waves of lesser invaders. The story is told through visual novel-style cutscenes, and in between story missions, you can take on bonus stages for a chance to earn extra upgrades and resources. Each mech has its own pilot, and they all have slightly different stories as they progress through the campaign.

While the single-player mode is decent, it’s pretty clear multiplayer fights were the focus of development. There are several options available here: team fights, one-on-one battles, online matchups (sadly, no console cross-play), and you can even stuff multiple people in a single mech and try to fight as an organized team. I only got to try out controlling the arms and head as a two-person mech, but I could see a full eight-player game with everyone controlling a separate limb being a lot of fun. 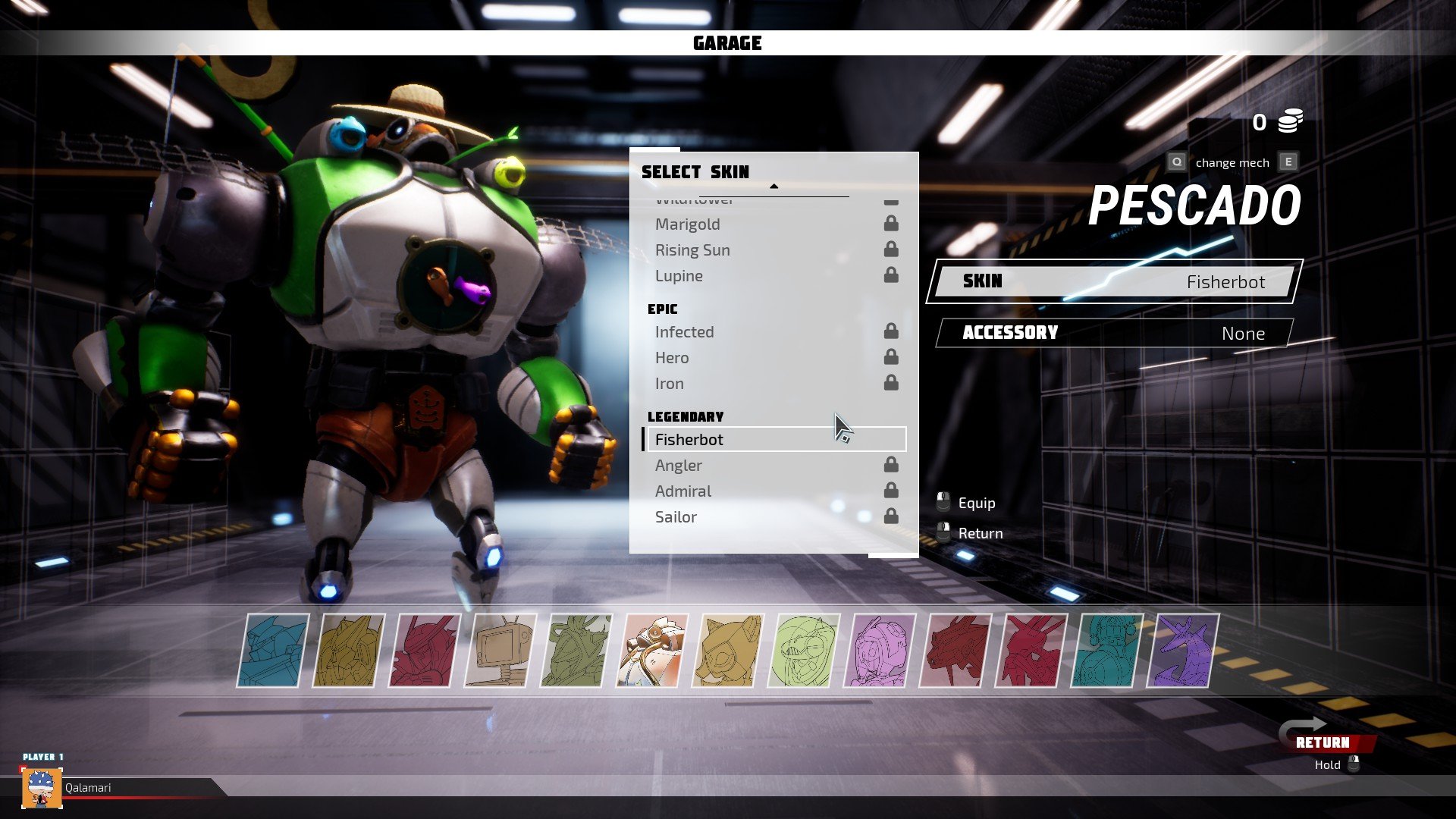 After every battle, you earn a skin or cosmetic unlock for one of the mechs in your garage. The skins are the main incentive to buy the physical or digital deluxe version as opposed to the standard edition, and they come with one Legendary skin for each combatant as well as access to four upcoming DLC fighters. (One of these has already released, the robot unicorn called Stardust.) Thankfully, I didn’t see any way to buy these skins with real currency, but it’s kind of an odd choice for a progression system. I guess for those who really get into the online fights, they’ll be able to show off their dedication by equipping a snowman head or novelty sombrero.

Unfortunately, there are quite a few problems holding Override back. The visuals are nice and colorful, but I ran into a lot of frame drops. My rig is getting to the point where it needs some upgrades, but it’s well within the recommended system specs so your mileage may vary. For me, moving the camera quickly or blowing up a lot of buildings at once seemed to overload the engine, and I got disoriented more than once with how many frames were being skipped. I also noticed the camera got lost when I backed into a corner, and my testing partner said she ended up getting an extreme close-up of her robot’s butt a lot more frequently than she’d have preferred. 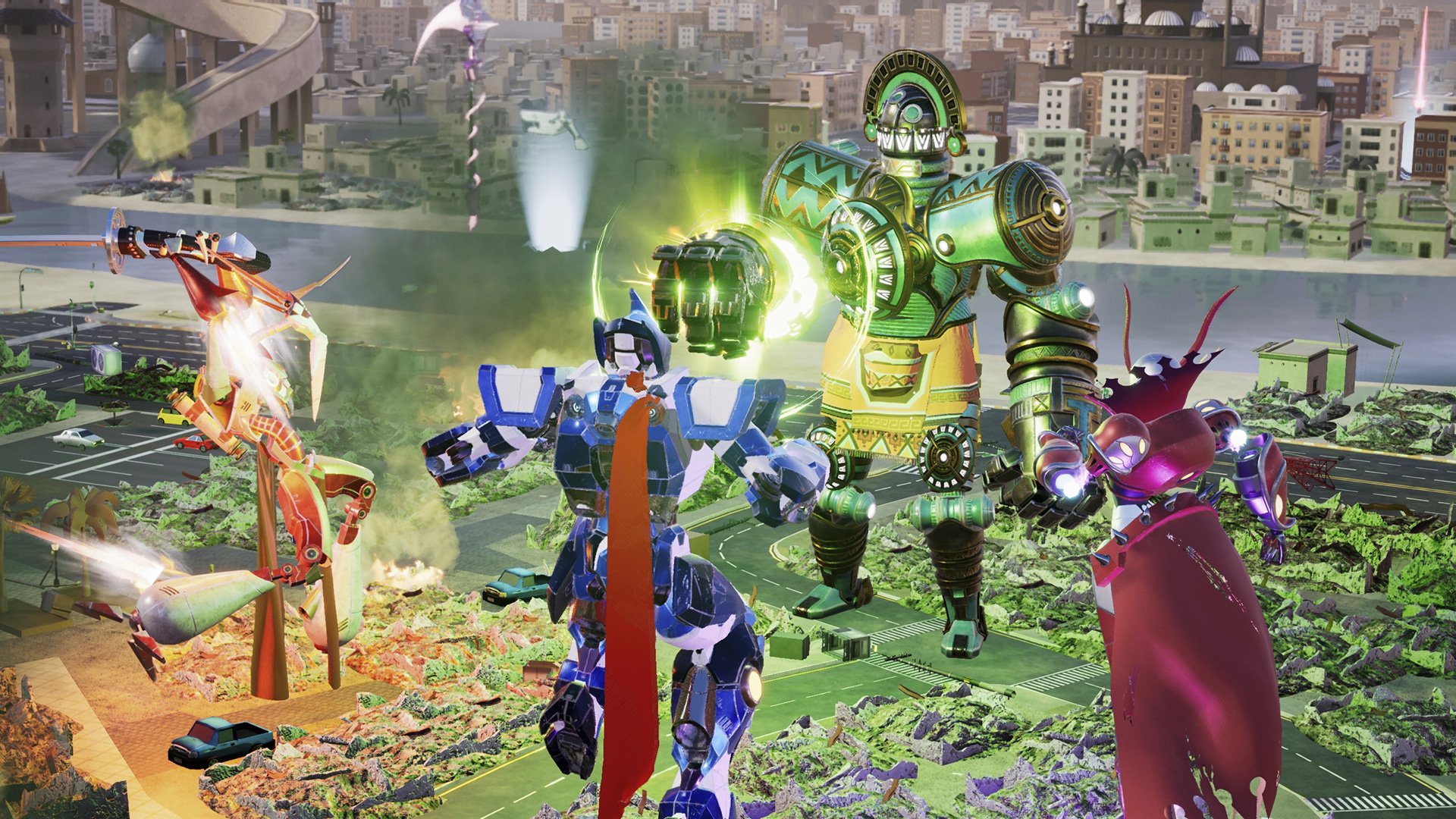 My other major problem with Override is how insubstantial everything feels. It looks nice when you plow through a building, but there’s absolutely no resistance, so it feels like even the largest skyscrapers are made out of tissue paper. The arenas are also fairly small, and blocked off by a glowing blue barrier that doesn’t have any story explanation. Most of the stages are just flat planes with buildings sprinkled around, so prolonged fights get pretty dull once you’ve kicked everything into rubble. There aren’t even any humans around to protect (yeah, right) or stomp on (there we go). It would have been a lot more fun if you could use the buildings as cover or climb on them, but this isn’t an option. The stages I enjoyed most had something solid to them, like the underground section in Egypt or the overpass in one of the city maps.

Override: Mech City Brawl had a lot of potential, but ultimately I like the concept a lot more than the execution. The fighting engine is adequate, but I felt like it should be a lot more fun blowing up a city in a million-ton robot suit. It kinda seems like this one was sent out to die, and that’s a damn shame.